French satirical magazine Charlie Hebdo has republished cartoons of the Prophet Muhammad ahead of the trial of the 14 people accused of helping to carry out the Islamist attack in January 2015, numerous sources reported.

The 12 original cartoons of the Prophet Muhammad include Muhammad wearing a bomb instead of a turban, and the French headline reads “Tout ça pour ça,” which means “All of that for this,” the BBC reported.

A Danish magazine first published the cartoons of Muhammad in 2005. A year later, Charlie Hebdo reprinted the cartoons, sparking anger among many Muslims for blasphemy.

Brothers Chérif and Said Kouachi attacked the magazine’s offices in Paris on Jan. 7, 2015 with grenades and submachine guns, killing 12 people. When the attackers left the scene, they shouted that they had “avenged the Prophet,” according to NPR.

Cartoons of the Prophet Muhammad made Charlie Hebdo a target for attacks in the past as well, leading to death threats against the editorial team and a petrol bomb attack on its officers in 2011, the BBC reported. (RELATED: Charlie Hebdo Releases New Magazine Cover After Paris Attacks)

“We will never give up,” wrote publishing director Laurent “Riss” Sourisseau, who was wounded in the attack, according to NPR. “The hatred that struck us is still there and, since 2015, it has taken the time to mutate, to change its appearance, to go unnoticed and to quietly continue its ruthless crusade.”

“The only reasons” not to reprint the cartoons, he said, “stem from political or journalistic cowardice.”

The gunmen from the 2015 incident also fatally shot a police officer and shoppers at a Jewish supermarket during a three-day killing spree that began the day of the January attack, killing 17 people in total. A third gunman reportedly claimed allegiance to ISIS, and al-Qaida claimed responsibility for the Charlie Hebdo attack, although the extent of any direct involvement by either terrorist group is unclear. 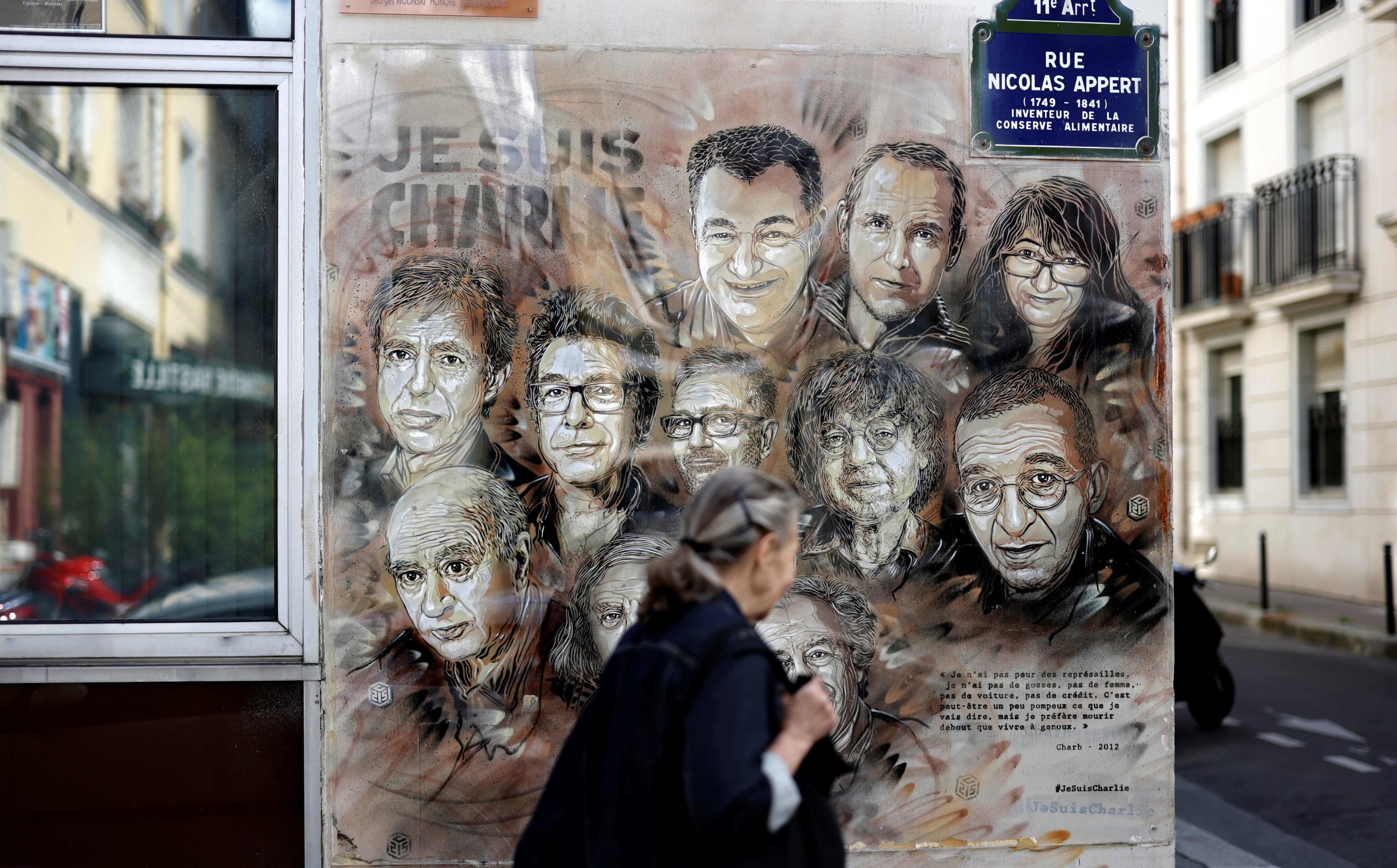 TOPSHOT – A woman walks past a painting by French street artist and painter Christian Guemy, known as C215, in tribute to members of Charlie Hebdo newspaper who were killed by jihadist gunmen in January 2015, in Paris, on August 31, 2020. – Fourteen alleged accomplices in the 2015 jihadist attacks on the Charlie Hebdo satirical weekly, on a kosher supermarket and in the southern Paris suburb Montrouge go on trial on Sept. 2, more than half-a-decade after days of bloodshed that still shock France. (Photo by THOMAS COEX/AFP via Getty Images)

Brothers Chérif  and Said Kouachi along with the kosher grocery gunman were killed in police raids.

Five years after the attack, the terrorist threat in France remains at an “extremely high level” according to Interior Minister Gerald Darmanin. More than 8,000 people are listed and watched by French intelligence for terrorist radicalization, according to ABC News.

In total, 14 people are accused of obtaining weapons and providing logistical support for the attacks on the Charlie Hebdo officers and the subsequent attacks.

The trial begins Wednesday, and the suspects face between 10 years and life in prison if convicted, NPR reported.