As a top FBI counterintelligence official in early 2017, Peter Strzok expressed concern over the prospect that details of the Trump-Russia investigation would someday become public and be heavily scrutinized, according to newly released emails.

The emails, released by Judicial Watch, provide insight on Strzok and other FBI officials’ thinking during Crossfire Hurricane, the code name given to the FBI’s counterintelligence investigation of the Trump campaign.

In an email on March 22, 2017, Strzok summarized a CNN segment in which Phil Mudd, a former CIA and FBI official, warned FBI officials that the investigation would come under intense scrutiny.

Strzok relayed to FBI official Jonathan Moffa and FBI lawyer Lisa Page that Mudd said the “first thing I tell my counterintelligence guys is, slow down, make sure you do everything right.”

“When this eventually becomes public, it will be more picked over than even the Clinton investigation,” Strzok said, paraphrasing Mudd.

Mudd also offered advice to FBI officials to “cross every ‘t'” in the investigation.

“He’s right,” Strzok wrote to Moffa and another FBI official, adding: “And that worries me.”

It is not clear why attention on the Crossfire Hurricane probe worried Strzok, who opened the probe on July 31, 2016. Revelations about the investigation that have come to light in the years since Strzok’s email have proved embarrassing for the bureau.

The special counsel’s report said prosecutors could not establish that Trump associates conspired with Russia. A Justice Department inspector general’s report said that the FBI committed 17 “significant” errors and omissions in applications to surveil Carter Page.

Kevin Clinesmith, who was an FBI lawyer who worked on the investigation, pleaded guilty on Aug. 19 to altering an email regarding Carter Page’s relationship with the CIA. The IG report was highly critical of FBI counterintelligence agent Steven Somma, saying that he was responsible for several failures in the investigation.

Strzok is not directly accused of wrongdoing in the IG report, though he had numerous exchanges with Clinesmith and Somma during the probe.

In the CNN segment that Strzok referenced, Mudd was commenting on a CNN report that U.S. officials were investigating whether Trump associates coordinated with the Russian government to influence the 2016 election. (RELATED: DOJ Watchdog Faults FBI Over ‘Significant’ Inaccuracies In Carter Page FISAs) 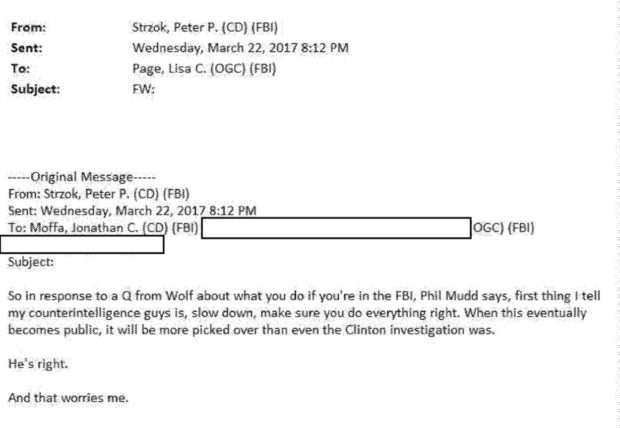 The story cited then-FBI Director James Comey’s testimony days earlier that the bureau had received “a credible allegation of wrongdoing or reasonable basis to believe an American may be acting as an agent of a foreign power.”

Unknown to the American public at the time, the FBI was surveilling Carter Page under the Foreign Intelligence Surveillance Act (FISA).

The FBI relied heavily on unverified information from Christopher Steele to assert in FISA applications that Page worked as an agent of Russia.

Strzok was removed from the special counsel’s investigation in late July 2017 after the IG discovered anti-Trump text messages he exchanged with Lisa Page. He was fired from the FBI in August 2018.

Strzok’s attorney did not respond to a request seeking comment.