A spokesperson for the Gun Owners of America, a prominent Second Amendment group, told the Daily Caller News Foundation that Kyle Rittenhouse’s actions in Kenosha, Wisconsin last week were justified in the context of self defense.

Firearms instructor and GOA spokesman Alan Rice, who spoke on behalf of the organization’s lawyers, insisted 17-year-old Rittenhouse was within his legal right to self preservation when he allegedly shot three people, killing two of them, in the riots that followed the police shooting of Jacob Blake.

“We don’t think he did anything wrong as far as defending himself and using a firearm,” Rice told the DCNF in a phone interview. “They chased him, they followed him and he was forced to fire in self defense.”

Rittenhouse was arrested last week after being accused of shooting and killing one man near an auto body shop while he was being chased around midnight going into Wednesday morning, according to a criminal complaint obtained by Axios. The 17-year-old ran into the road, tripped and fell to the ground and allegedly fatally shot another man in the chest and a third in the arm as they rushed him, the complaint stated.

“It’s the defender’s perception, did he perceive his life was in immediate or otherwise unavoidable danger of death or serious bodily injury?” Rice said. “I do think he made the right call, I think he would’ve been seriously injured or worse, killed, if he didn’t fight back. I don’t think he had a choice, these guys were chasing him and he was outnumbered.”

Videos and the criminal complaint used to charge Rittenhouse both substantiate claims that the teenager was fleeing from a group before the first shooting. Rice also invoked Wisconsin self defense law to bolster GOA’s view that the 17-year-old was justified in his course of action.

NYT Investigative Journalist shows that Kyle Rittenhouse did not shoot first. He was running away from Antifa & rioters pursuing him while shots were fired. pic.twitter.com/mVU3SAkWWb

“A person is privileged to threaten or intentionally use force against another for the purpose of preventing or terminating what the person reasonably believes to be an unlawful interference with his or her person by such other person,” the Wisconsin self defense law referenced by Rice reads, according to the state legislature. “The actor may intentionally use only such force or threat thereof as the actor reasonably believes is necessary to prevent or terminate the interference.”

Rice said that Rittenhouse acted within the legal bounds of the state law and insisted the code is one of the more lenient in the U.S., as it allows the defender to use threats and take preventative self defense action.

“Because let’s be clear,” liberal talk show host John Oliver said in a Sunday show, according to the Daily Beast. “A 17-year-old vigilante with a rifle cannot maintain order, because a 17-year-old vigilante with a rifle trying to maintain order is himself the definition of disorder—except, of course, if you’re a regular viewer of Tucker Carlson, a show that exists to teach its viewers precisely three things: Property damage is violence, homicide is order, and pillows are for sale.”

Others argue that Rittenhouse was illegally carrying the rifle.

Look at all these shitheart performative rightwing accounts trying to argue a 17-year-old in illegal possession of a loaded rifle shot multiple people “in self-defense.” At least now you know “law and order” is just a weakly coded message, if you didn’t before

Rice disagrees with the characterization of Rittenhouse as a “vigilante” and pointed to statements from the teenager’s lawyer Pierce Bainbridge to debunk the classification of the AR-15 as illegal.

Bainbridge in a Friday statement wrote that Rittenhouse finished his workday as a community lifeguard in Kenosha, cleaned graffiti off a local public school and then traveled to a car dealership after the owners called for help from the public. Rittenhouse and a friend grabbed rifles that were legally possessed in Wisconsin to protect the businesses seeking aid, the statement read.

“We’ve got to remember, why were these people in Kenosha? These people are in Wisconsin because of a shooting to riot and burn and we’ve got Kyle Rittenhouse going to a local school and washing graffiti off the wall,” Rice said.

“Without knowing anything about the situation, it looks to me like Kyle Rittenhouse is a pretty decent young man.”

The criminal complaint issued against the teen lists a misdemeanor charge for possession of a firearm by a minor. Additionally, it is forbidden for someone to carry a firearm openly in the state of Wisconsin unless they are over 18, according to USA Carry.

Rice also said Rittenhouse appeared to be trained and the accuracy of his shot placement may bode well in his defense. 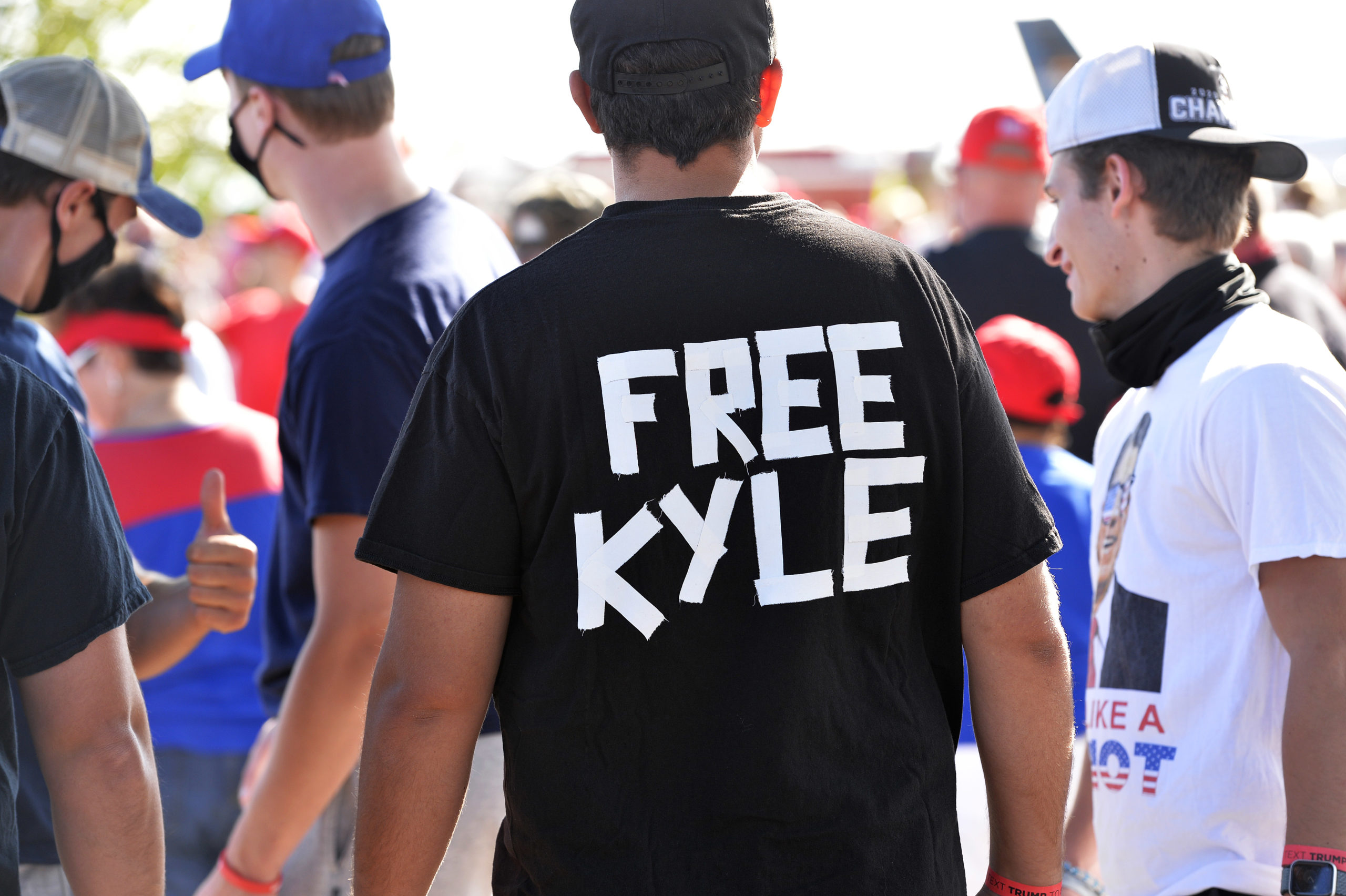 A man wears a shirt calling for freedom for Kyle Rittenhouse during a Trump campaign rally. (JOSEPH PREZIOSO/AFP via Getty Images)

“As far as the shot placement, we teach in self defense training: hits count, misses don’t. He didn’t hit an innocent bystander and his shots went where they needed to go, so that shows an amazing amount of discipline — he’s obviously had training,” Rice told the DCNF.

“I would guess that his defense team would raise that at trial and say he wasn’t reckless, he wasn’t dangerous, he hit the person who was trying to harm him,” he continued. (RELATED: Here’s What We Know About The Kenosha Shooting And Its Victims)

Rittenhouse is accused of killing Joseph Rosenbaum, 36, and Kyle Huber, 26, in addition to severely injuring Gaige Grosskreutz, 26, with a grizzly wound to the arm, according to the complaint. All three of the men had past convictions ranging from sexual conduct with a minor to felony strangulation and false imprisonment, according to a DCNF analysis of Kenosha and statewide court databases.

Huber was hailed as a hero by some for trying to thwart the shooting by hitting Rittenhouse with a skateboard, but Rice disagreed.

Anthony Huber was the hero that tried to apprehend the gunman in #Kenosha, after the gunman shot a BLM protester in the face he ran-up to him with his skateboard to stop him from shooting others. He was shot in the chest by the gunman and died. Rest in power, Anthony Huber. pic.twitter.com/c0Kw4v7926

“That skateboard ceased to be a skateboard when the person who had it decided to turn it into a deadly weapon,” Rice said. “That skateboard at that moment was the same thing as someone swinging a baseball bat.”