AARP finances its operations by overcharging members for health care policies and through its billion-dollar relationship with UnitedHealth Group, according to a new public policy report.

Despite its “non-profit” status, AARP’s profits have been increasing for years largely due to the organization’s practices of marketing of products and services, the report. The report, published by public policy think tank American Commitment, mainly examined AARP’s source of revenue since the passage of The Affordable Care Act in 2010.

“AARP works against its members in many respects,” Chris Jacobs, founder of consulting and analytics firm Juniper Research Group and author of the report, told The Daily Caller News Foundation.

He continued: “They’ve built a marketing empire that they use for compensation for their executives and their staff.” 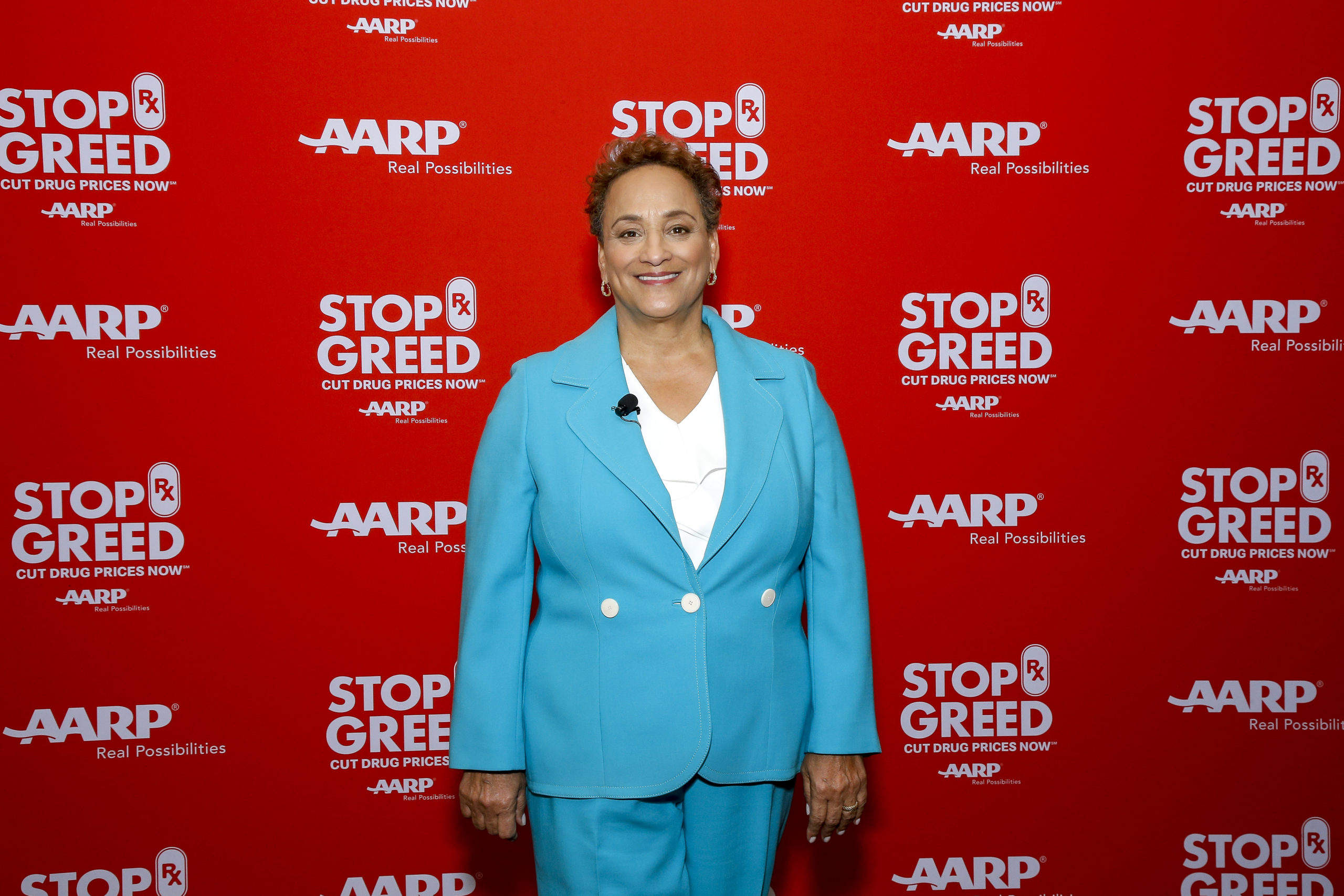 AARP reported $1.6 billion of revenue and $246.4 million of profit in 2018, the most recent year in which data was available, according to Jacobs’ report. That means AARP reported a surplus of 13.4%.

Membership dues were just 18% of AARP’s revenue in 2018 and since 2000 have increasingly made up a smaller portion of revenues, according to Jacobs. More than half of the organization’s 2018 revenue, or roughly 57%, derived from “royalty fees,” which are payments for the use of its brand.

In the past four years, AARP has been sued three times by its own members over its royalty fee policy, which they argued was deceptive, according to court filings. However, AARP ultimately won each of the cases.

The Daily Caller News Foundation contacted the AARP multiple times seeking comment for this article, but the organization never responded. 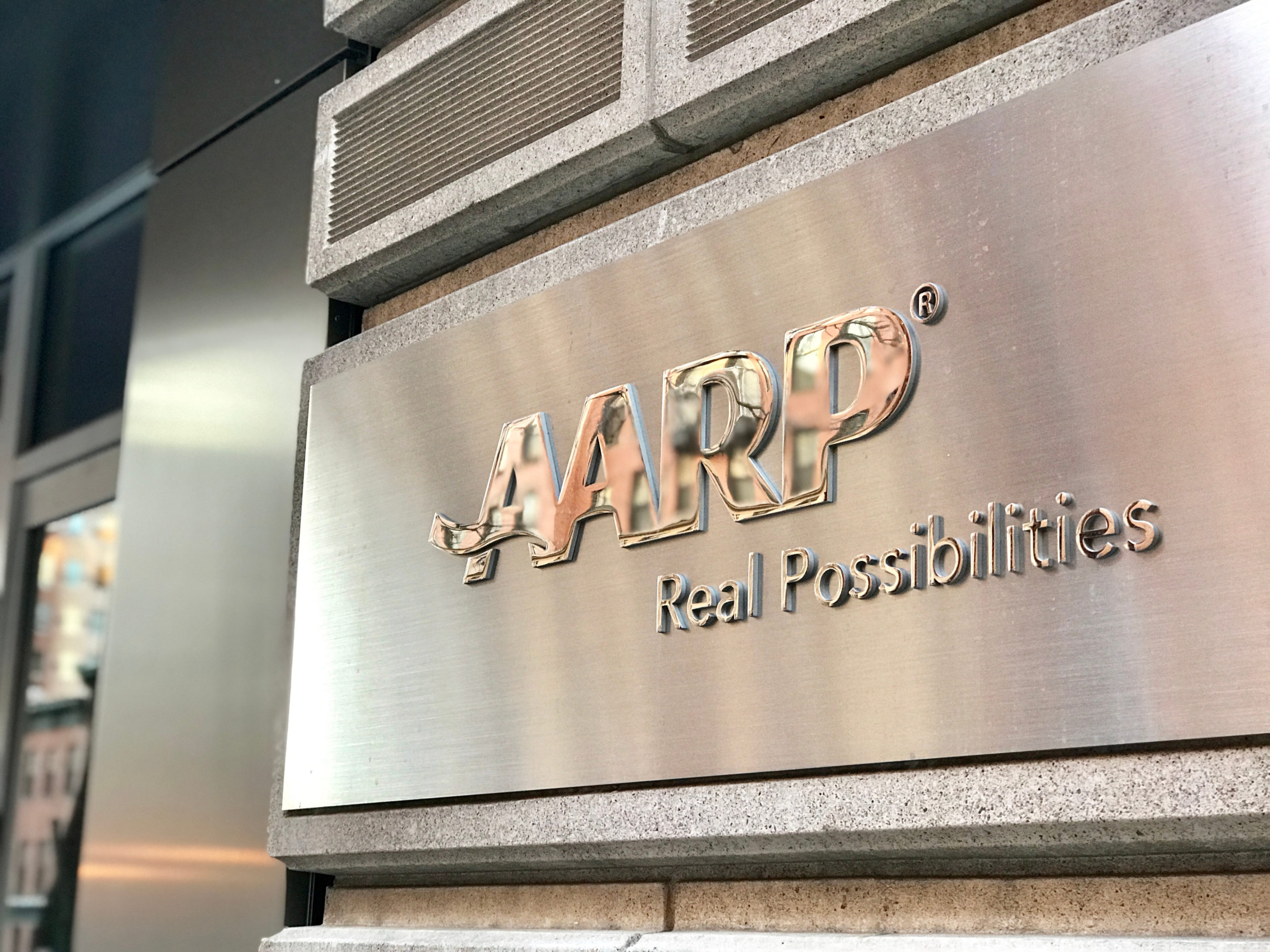 The biggest contributor to the AARP royalty fee revenue comes from health insurance giant UnitedHealth Group, the American Commitment report said. One of the drivers of AARP’s revenue growth has been UnitedHealth.

AARP received $283.7 million from UnitedHealth in 2007, accounting for 57% of its royalty fee income, according to the report. In 2017, the most recent year this data was available, that number had risen to $627.2 million or 69% of royalty fee income.

The organization offers three AARP-branded health care plans to its members via its marketplace: Medicare Advantage, Medicare Part D and Medigap, according to the report. UnitedHealth, which is the main insurance provider on the marketplace, pays a royalty fee to AARP since it is using its brand to sell these health plans. 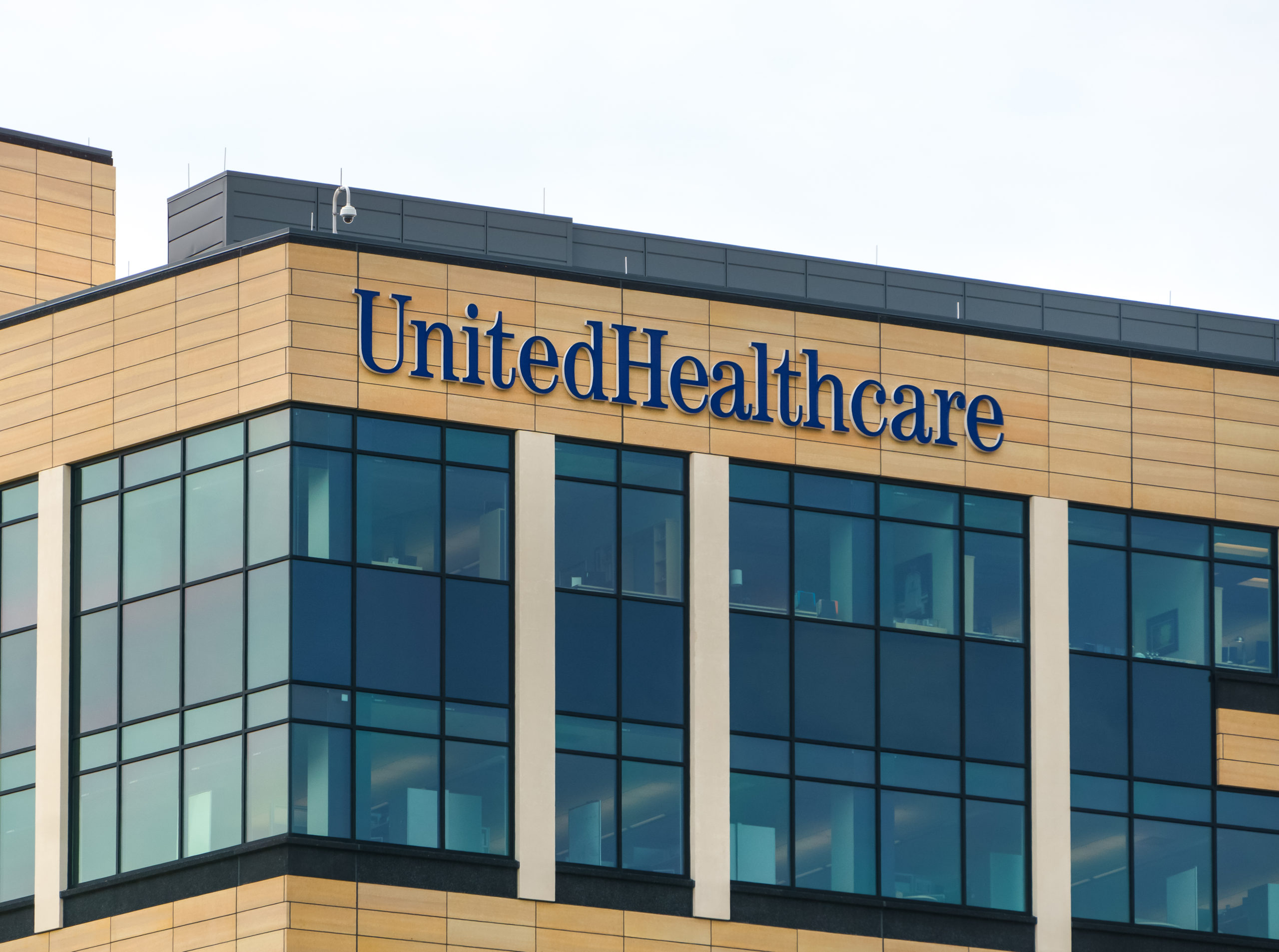 While UnitedHealth pays a flat royalty fee to AARP for the ability to sell Medicare Advantage and Medicare Part D to AARP members, it charges a 4.95% fee to every member that purchases Medigap coverage, according to Jacobs. That royalty, which has been in place since at least 1997, has been the subject of a congressional investigation and multiple lawsuits.

Members enrolled in Medicare Advantage and Part D pay premiums directly to UnitedHealth who then pays the flat royalty fee to AARP, whereas members with Medigap coverage pay AARP who takes a percentage and gives the rest to UnitedHealth, according to Jacobs.

It continued: “To put the figure into perspective, it exceeds the 2018 profit margins of five major health insurers (Anthem, Centene, Humana, WellCare, and Molina), and approaches the profit margins of the other two (UnitedHealthGroup and Cigna).” 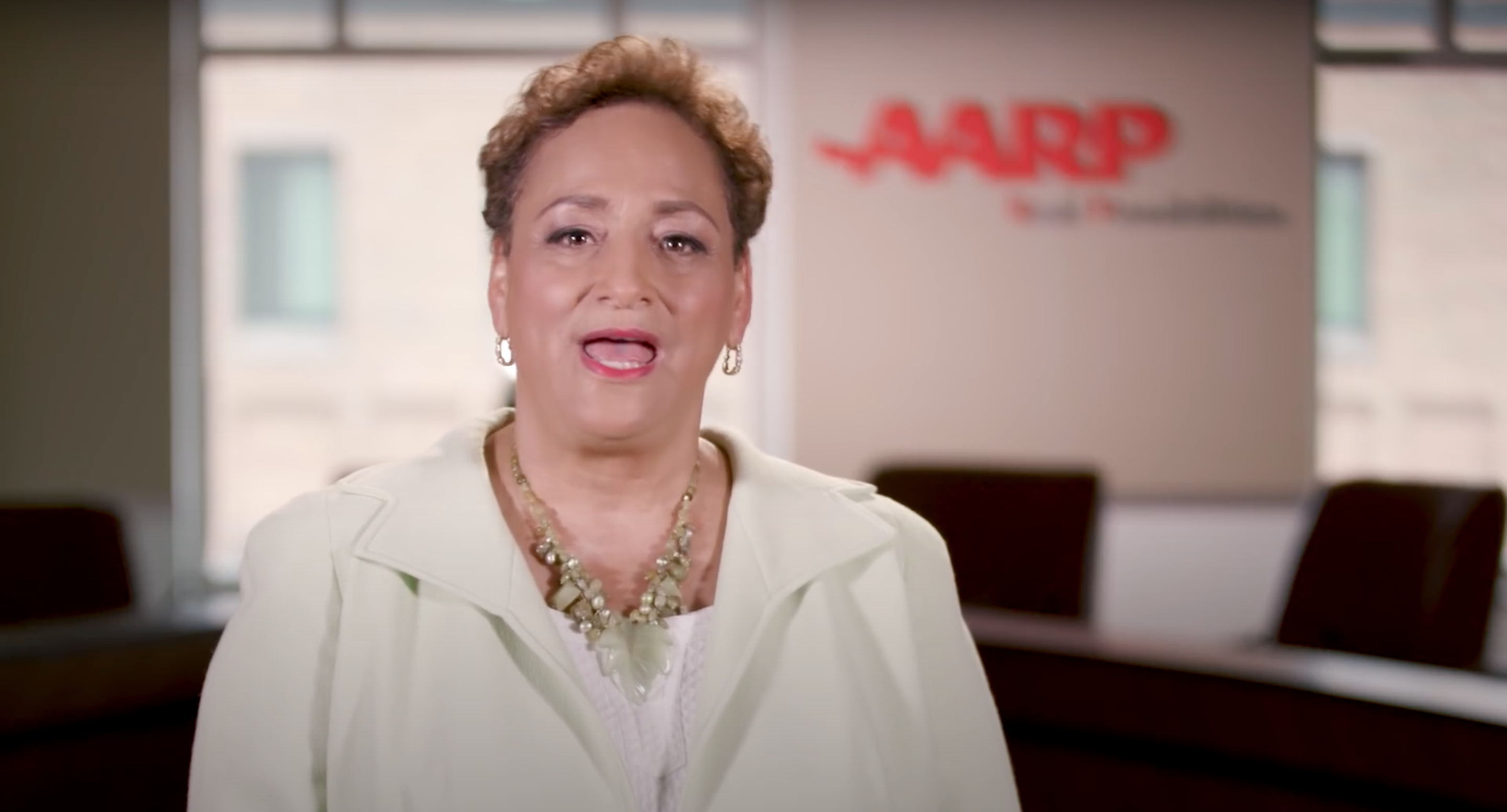 Further, AARP takes the revenue that it receives from members with Medigap insurance and makes interest on it before giving it to UnitedHealth, according to the report. Jacobs laid out an example in which a member had a $100 premium and $5 royalty fee.

“They will get $105 from the senior on the first of the month, but they may not pay UnitedHealth the $100 until the 20th of the month,” Jacobs said. “They make interest and they make money on that money.”

The 4.95% fee has faced scrutiny because it represents an upcharge on premiums, which directly affects members who enroll in Medigap coverage through the AARP marketplace, according to Jacobs.

U.S. District Court of Washington D.C. Judge Beryl Howell ruled in favor of AARP in May dismissing the plaintiffs’ class action lawsuit. The plaintiffs, led by AARP member Helen Krukas, argued that the organization misrepresented its Medigap royalty fee structure, according to Forbes.

The plaintiffs specifically argued that AARP was “micromanaging the sale of Medigap and therefore [the 4.95% fee] is not really a royalty fee for its intellectual property. They are a salesman. This is a commission and it’s taxable,” Jacobs said. 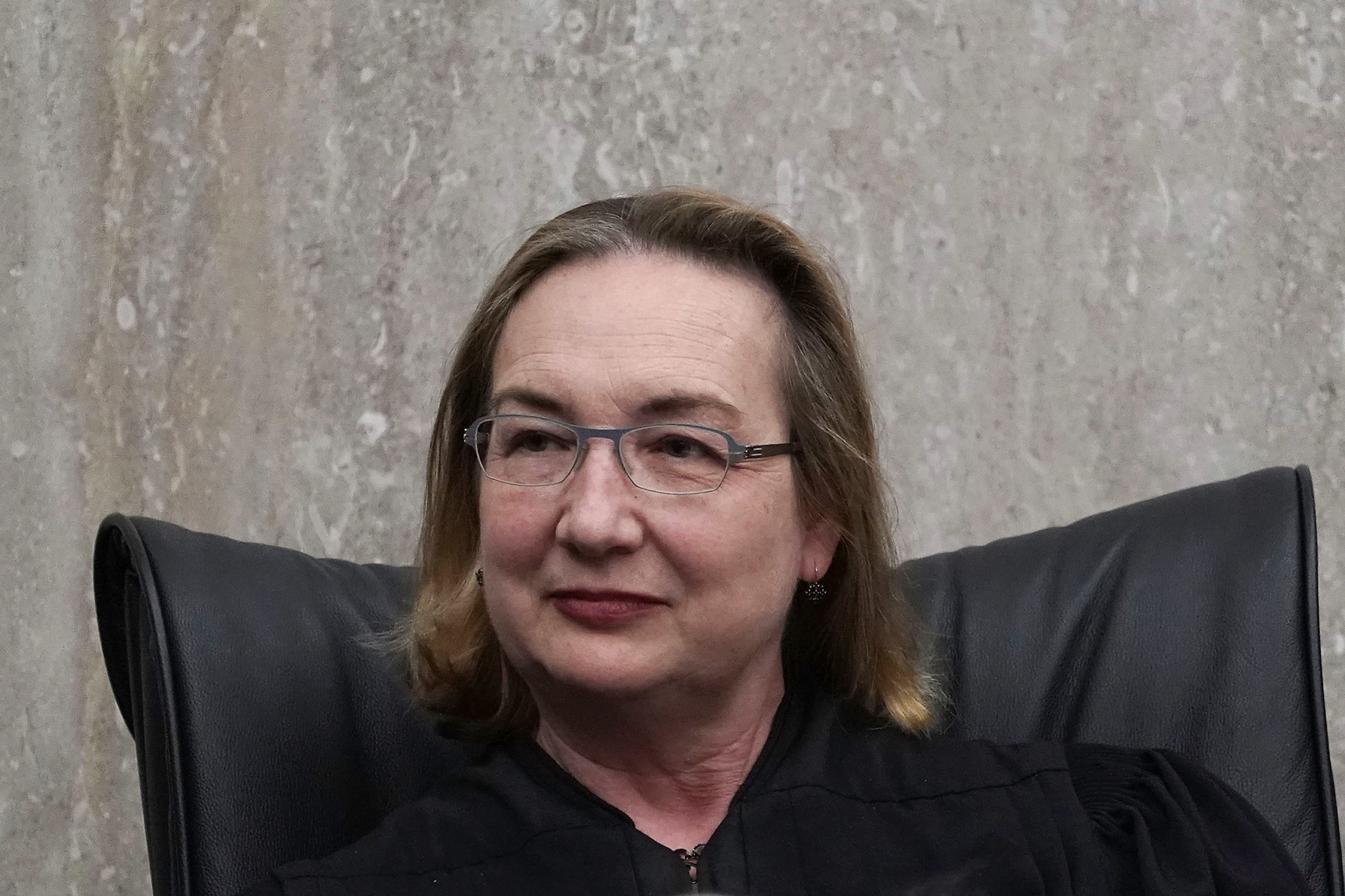 But, in May Howell ruled that Krukas’ argument misses the mark. She said Krukas failed to prove that AARP has a fiduciary relationship with its members.

The second dismissal came after the three-judge panel Ninth Circuit Court of Appeals ruled in favor of the plaintiffs. The panel ruled that AARP “transacts” and “solicits” insurance without a license and engaged in fraud by calling the 4.95% commission a “royalty,” according to Forbes. 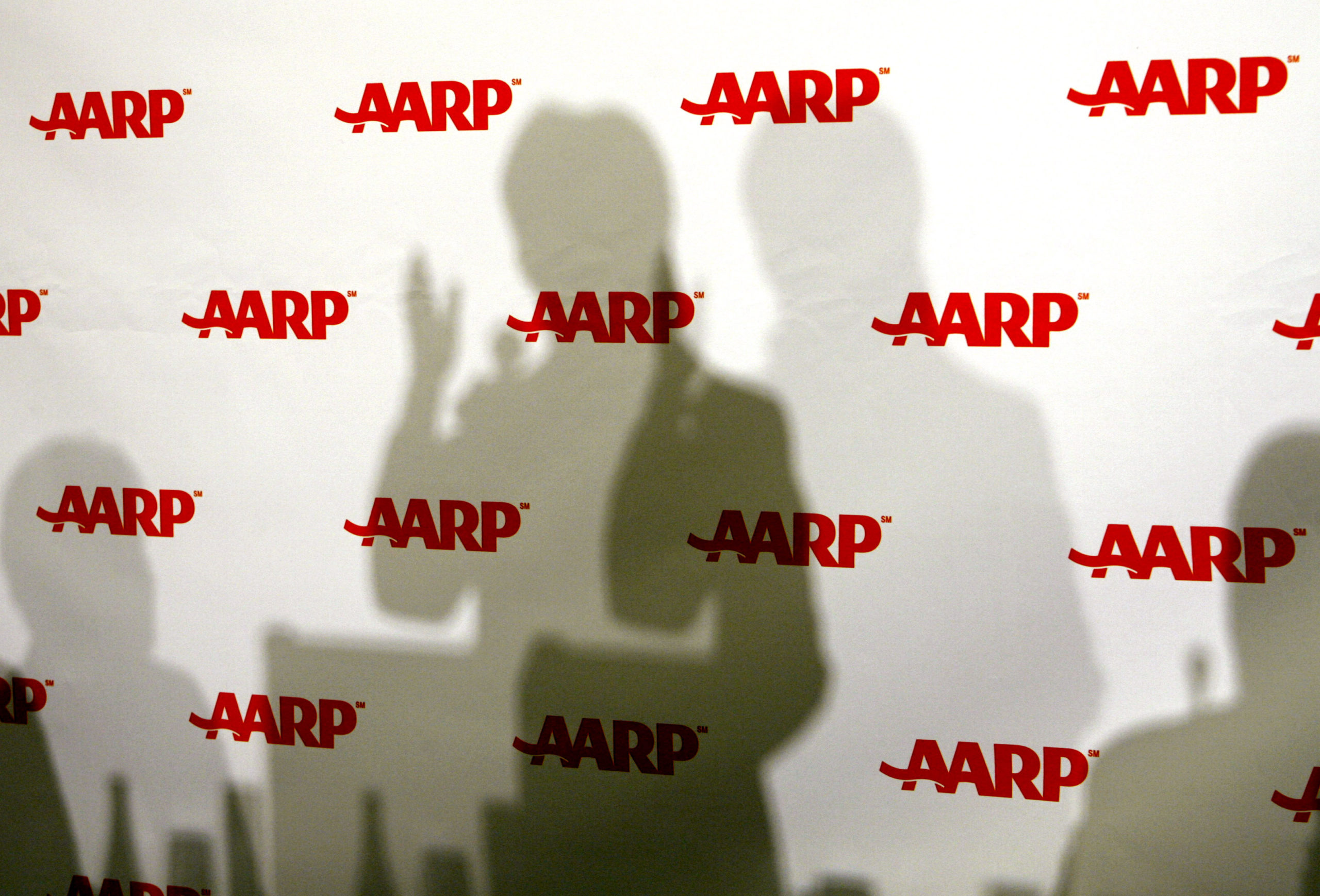 The shadow of Hillary Clinton is seen as she speaks at the annual public policy meeting of AARP in 2007. (Kevin Lamarque/Reuters)

Further, the House Ways and Means Committee investigated AARP in 2011. The investigation pointed out several potential issues with AARP’s structure including its royalty fee practices and concluded with a series of suggestions for the Internal Revenue Service to consider.

“As this report has shown, AARP may be in violation of a number of the requirements imposed on organizations operating under a federal tax exemption,” the committee’s report said.

It continued: “In particular, one might question whether AARP is primarily operating to promote the common good and general welfare given the fact that AARP has become increasingly dependent on hundreds of millions of dollars in royalty revenue from insurance companies.”

The requirements of AARP as a 501(c)(4) organization are that it must operate to promote the common good, must be organized as a non-profit, may engage in political activity as long as it’s not the organization’s main activity and may engage in legislative lobbying to further its social welfare purposes, according to the committee’s report. 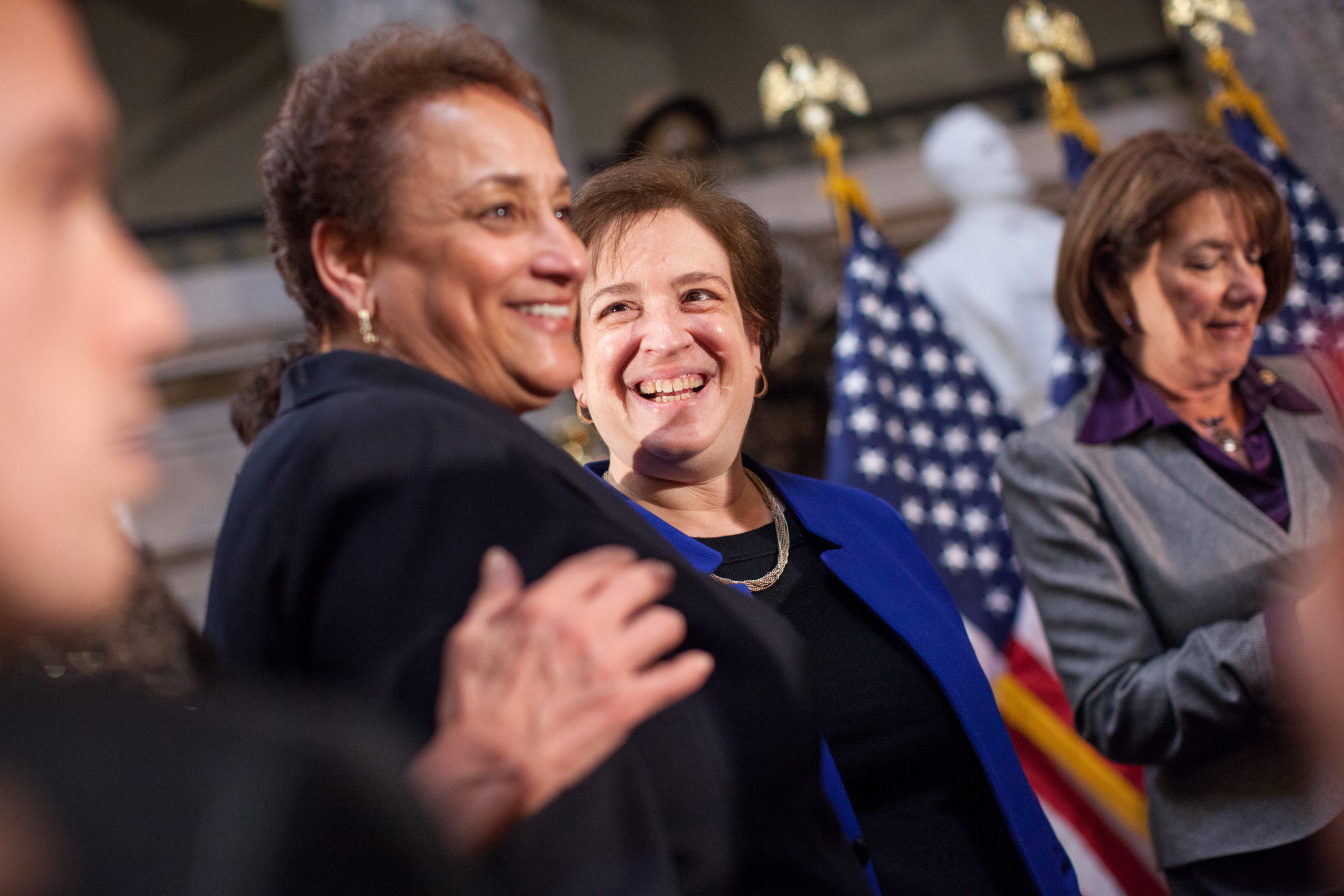 The AARP has a long history of spending a large amount of money lobbying a variety of legislation on Capitol Hill, according to the U.S. Senate lobbying database. For example the non-profit organization has spent about $4 million in 2020 so far, according to its first and second quarter lobbying reports.

Jacobs said AARP doesn’t just use its profits for large executive payouts, but for lobbying many “liberal causes.” 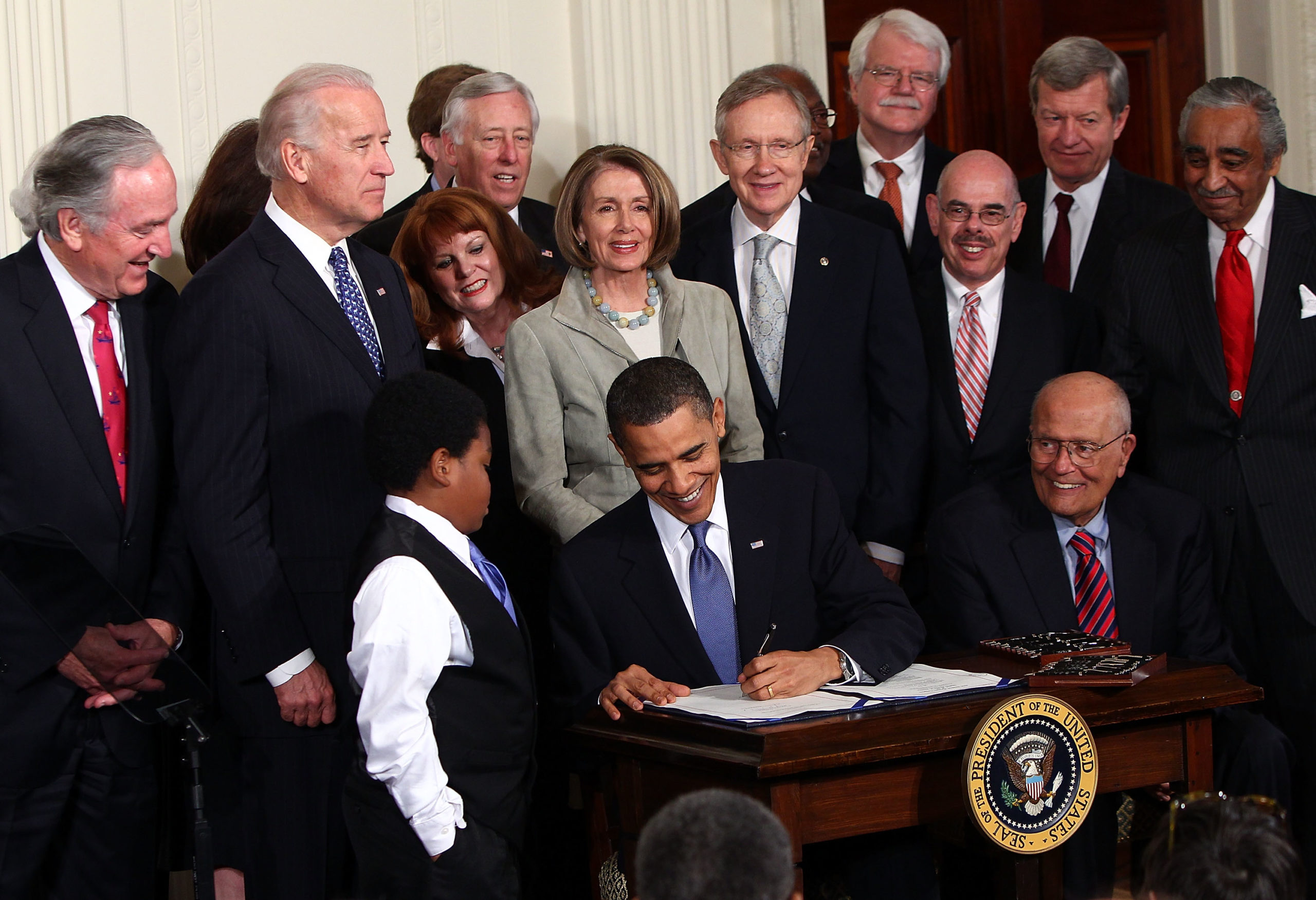 AARP was particularly active during the ACA debate in 2009 and 2010, according to data compiled by the Center for Responsive Politics. The ACA, which passed in 2010, was very favorable to the AARP, according to Jacobs’ report.

AARP lobbied for the ACA, according to its first, second, third and fourth quarter lobbying reports from 2010.

“Medigap insurance received a host of exemptions in the law,” the report said.

One exemption in the ACA saved UnitedHealth and therefore AARP $14 billion in taxes on Medigap, according to the report. This exemption was repealed in 2019. 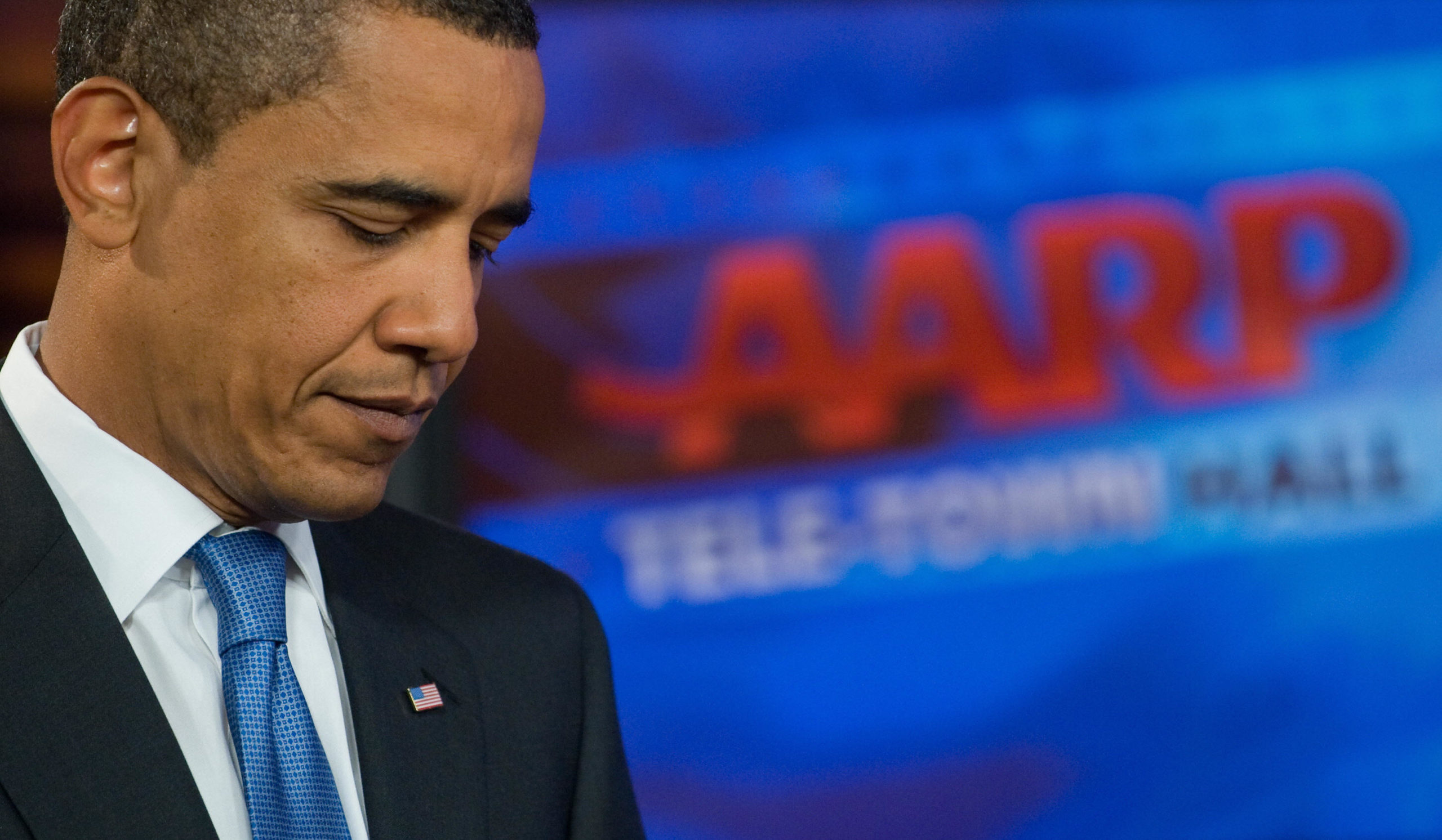 Obama attends a townhall meeting on healthcare at AARP headquarters in Washington in 2009. (Saul Loeb/AFP via Getty Images)

The ACA also exempted Medigap from the medical loss ratio provision, according to Jacobs. That provision forces insurance companies to spend a minimum of 80% of income made from premiums on health care, according to the Centers for Medicare and Medicaid Services.

Rather, the ACA lowered the ratio for Medigap policies to 65% meaning AARP is able to spend 35% of its income from such policies on administrative costs like executive salaries and marketing, according to the report.