Michael Forest Reinoehl was preparing for something.

The Antifa supporter, who was killed by federal authorities on Thursday night, posted on social media in June that he expected there to be “casualties” during clashes between left-wing and right-wing groups in Portland.

And early last month, the 48-year-old unemployed snowboard instructor asked his son to sell him a gun because he was “getting tired of this shit.”

Weeks later, on Aug. 29, Reinoehl appeared to lie in wait in the alcove of a parking garage in downtown Portland moments before the fatal shooting of Aaron “Jay” Danielson, a supporter of the conservative group Patriot Prayer.

The district attorney for Portland charged Reinoehl with second degree murder in Danielson’s death, according to records released on Friday.

Video recorded by a freelance journalist showed a man believed to be Reinoehl shooting Danielson after a caravan of Trump supporters drove through downtown Portland. Danielson died from a gunshot wound to the chest. (RELATED: Suspect In Fatal Portland Shooting Had Pending Gun Charges, Expressed Support For Antifa)

A police affidavit raises the possibility that Reinoehl was tracking Danielson, 39, before the shooting.

According to Portland detective Rico Beniga, Reinoehl was seen on closed-circuit camera walking with an unidentified associate on a Portland city sidewalk ahead of Danielson and his friend Chandler Pappas.

Beniga says in the affidavit that Reinoehl is seen on video glancing behind him in Danielson’s direction and reaching toward his waist.

“REINOEHL looks back toward Danielson and Pappas, but continues walking and begins reaching toward his waist band,” the detective said.

The video footage then shows Reinoehl turn into a garage entry as he continues reaching into the area of his waist.

“REINOEHL conceals himself, waits, and watches as Danielson and Pappas continue walking by,” writes Beniga.

A video still shows Reinoehl appearing to peak around a corner as Danielson and Pappas walk by. Reinoehl, who is seen wearing a black hat, white shirt, and a black-and-white vest, is seen with his right hand held down at the left side of his body.

According to Beniga, Danielson and Pappas continued walking by without interacting with anyone else. Danielson is seen holding a can of bear spray and an expandable baton that were found near him after the shooting. 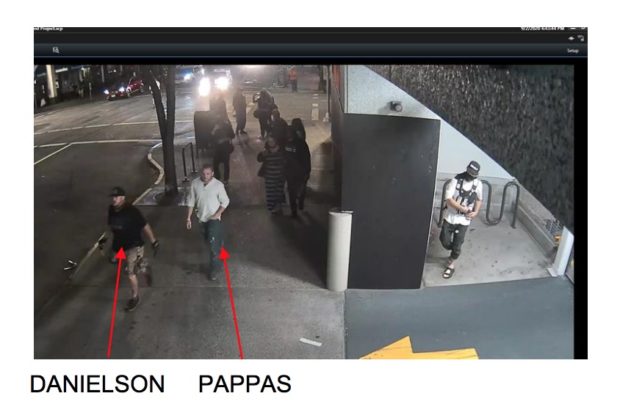 According to Beniga, Reinoehl “begins to emerge” from the garage as Danielson and Pappas walk by, “while still reaching toward the pocket or pouch on his waistband.”

Reinoehl’s associate, called “Subject #2” in the affidavit, is seen in another video still glancing back at the alleged gunman. They then follow Danielson and Pappas as the pair crossed the street.

“The shooting occurs shortly thereafter and is not captured on the surveillance video,” Beniga wrote.

Danielson had a firearm in his waist band when he was shot, according to Beniga. The detective said that the gun was not discharged during the incident.

Eyewitnesses to the shooting told detectives that the assailants approached Danielson and Pappas in the moments before fatal shots were fired.

“Ryerson said he observed ‘Jay’ pull out a can of mace and then heard two gunshots,” Beniga wrote in the affidavit.

Another witness who was driving at the time of the shooting said he heard someone yell, “Hey there’s the guy.” The witness then saw Danielson pull out a can and begin spraying before hearing two gun shots.

The affidavit says that Subject #2 has not been apprehended.

He was arrested on July 5 on charges of resisting arrest and illegal possession of a loaded firearm. Reinoehl, who had posted on Instagram that he was “100% Antifa,” also told Bloomberg QuickTake in an interview that he was shot in the elbow during a scuffle between protesters.

On June 8, in an incident unrelated to Portland protests, Reinoehl was cited for illegal gun possession after he was pulled over driving under the influence at 111-mph on an Oregon interstate. Reinoehl’s 11-year-old daughter was reportedly with him in the vehicle at the time, leading to a reckless endangerment charge.

Beniga said in his affidavit that officers had taken Reinoehl’s gun from him following the previous police encounters. But a text message cited in the affidavit shows that Reinoehl sought a gun from his son, possibly for use during the Portland protests.

“Sell me the gun for a quarter pound of weed and $100 i’m getting tired of this shit I need a piece now,” Reinoehl wrote in an Aug. 8 text message, according to Beniga.

Reinoehl was killed Thursday night in Lacey, Washington, as a federal fugitive task force swooped in to try to detain him on the murder charge.

The New York Times reported Reinoehl’s death minutes after VICE News aired an interview with the Antifa supporter from an undisclosed location.

Reinoehl all but admitted in the interview to shooting Danielson, though he claimed he did so in self-defense.

“I felt that my life, and other people around me’s lives were in danger, and I felt like I had no choice but to do what I did,” he said.

“Had I not acted I’m confident that my friend, and I’m sure I would have been killed.”

Reinoehl said that he had not planned to attend protests in Portland on the night of the shooting. But he was out with his son when he came across “hundreds of trucks with flags on them.”

He said he contacted his friends after seeing the Trump caravan and later received a phone call in which he was told “It might be a good idea to come down there because security might be needed.”

“Every time I see a big truck, especially with a flag on it, I immediately think that they’re out to get me,” Reinoehl told VICE.

He said that seeing hundreds of trucks in the Trump caravan “felt like the beginning of a war.”

“I hate to say it, but I see a civil war right around the corner. That shot felt like the beginning of a war.”