Joe Prude, brother of Daniel Prude who died in police custody after a “spit hood” was put on him during arrest in March, called Rochester police “some cold-blooded damn killers” who “assassinated” his brother Monday, according to the New York Post.

Joe made the remarks at a protest in Rochester that featured hundreds of protestors, the Post reported. This was the sixth straight night the city was embattled with protests, some of which turned destructive and violent.

He echoed others who have suggested this was an attempted cover-up by Rochester police.

“They didn’t want that tape to come out,” he said. “They did not want that visual of my brother being assassinated by some cold-blooded damn killers,” per the New York Post.

“You know we don’t have a problem holding anyone accountable, but the investigation has to take its course,” Singletary said according to the Rochester Democrat and Chronicle.

Mayor Lovely Warren said Wednesday that “at no point in time did we feel that this was something that we wanted not to disclose,” the Rochester Democrat and Chronicle further reported.

She explained Rochester’s city government and police’s silence on the issue is because they “are precluded from getting involved in it until that agency [the AG’s Office] has completed their investigation.”

Joe said “justice” is “all I want for my brother. Nothing else but justice,” and thanked those attending the protests for “standing up for what’s right.” 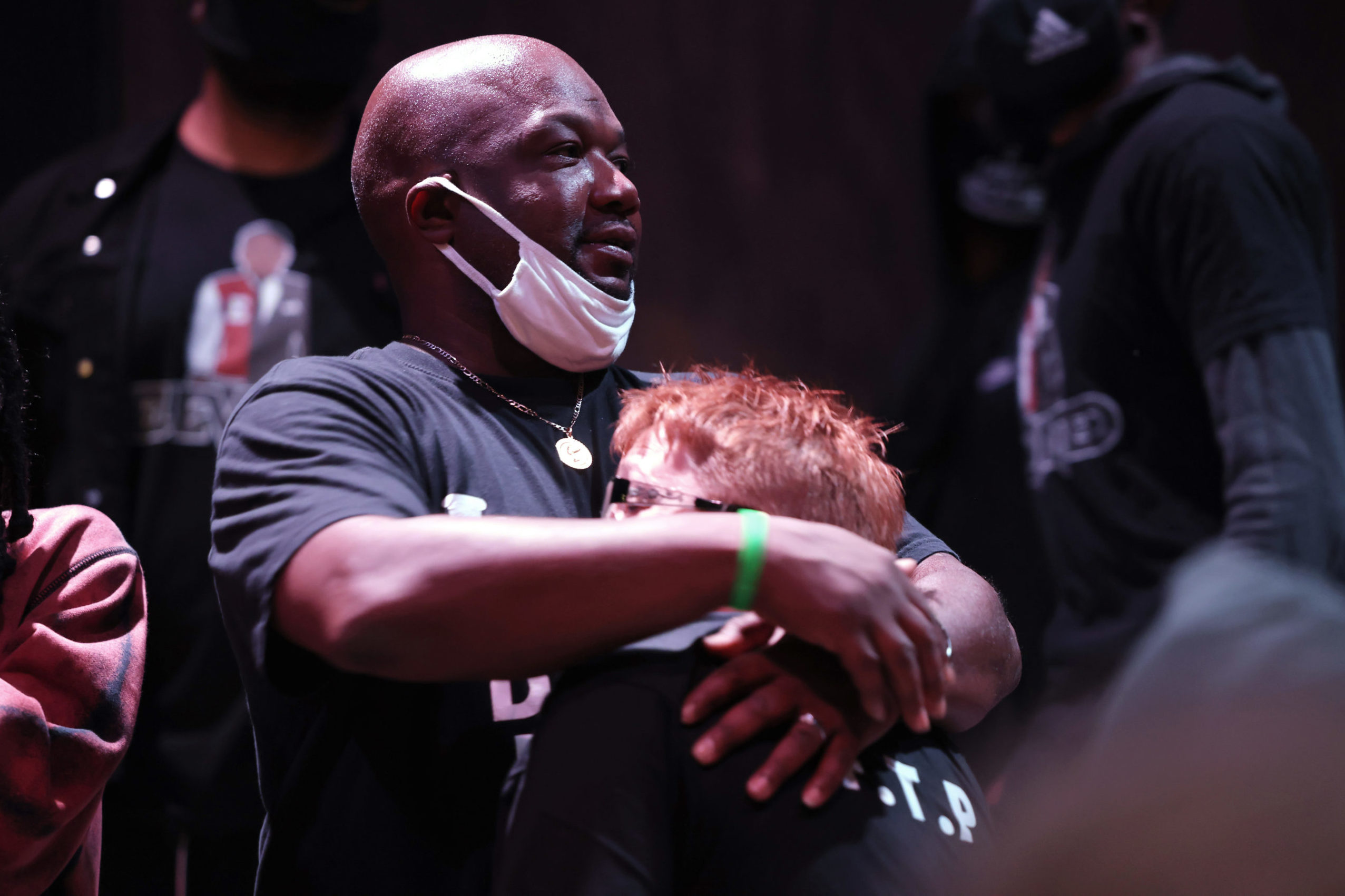 ROCHESTER, NEW YORK – SEPT. 07: Joe Prude, the brother of Daniel Prude, looks out into the crowd as he holds his wife Valerie while they take a break in front of City Hall from marching for his brother on Sept. 07, 2020 in Rochester, New York. This is the sixth consecutive night of protesting since family released bodycam footage of Daniel Prude’s arrest that led to his subsequent death. Since protesting began, Rochester Mayor Lovely Warren announced the suspension of seven officers involved in the arrest and promises reforms to the city’s police department. (Photo by Michael M. Santiago/Getty Images)

“Let’s love each other and let’s continue to fight the good fight,” he concluded.

The unrest over the events that unfolded in March began after Rochester police released video footage of the altercation between Daniel and police just days ago.

Daniel was apparently naked when police responded to 911 calls placed by Joe and others, reportedly including a tow truck driver who said Daniel was covered in blood. Police reports also say that Daniel had gone into a destructive frenzy, smashing several storefront windows and yelling about how he had coronavirus, NPR reported.

Once police arrived on the scene, released video footage shows Daniel following police commands as officers approach him with tasers drawn. While handcuffed, Prude is heard at one point shouting “Give me your gun, I need it,” at police.

Officers then put a spit hood over Daniel’s head. The officers believed this was justified since he was claiming to have coronavirus, as they can be heard saying in the video once EMTs arrive. Officers can be heard saying “Calm down” and “Stop spitting.”

One officer places his knee on Daniel’s back in the video footage.

Officers express concern in the video when Daniel is no longer moving. One officer remarks Prude “feels pretty cold.”

The hood and handcuffs were then removed in order to administer CPR before loading Daniel into the ambulance. One of the medics responding to the call can be heard telling the officers “PCP can cause what we call ‘excited delirium’” and that “it’s not your guys’ [the officers’] fault.”

The entire interaction — from handcuffs to ambulance — lasted a little less than 12 minutes, according to USA Today.

Daniel would die a week later in the hospital due to brain damage.

After his death, a medical examiner reportedly determined Daniel’s death to be caused by “complications of asphyxia in the setting of physical restraint.” The examiner also confirmed Prude had enough PCP in his system to contribute to his death, AP reported.

Warren has since suspended seven officers involved in the incident.