The Trump administration on Thursday announced sanctions against a Ukrainian lawmaker who met last year with Trump lawyer Rudy Giuliani and has pushed for a corruption investigation into Hunter Biden, the son of 2020 presidential candidate Joe Biden.

The Treasury Department accused Andriy Derkach of waging a pro-Kremlin disinformation campaign “in an attempt to undermine the upcoming 2020 U.S. presidential election.”

The agency said Derkach “has been an active Russian agent for over a decade, maintaining close connections with the Russian Intelligence Services.”

The move puts Derkach on the government’s “Specially Designated Nationals” list, which blocks his access to any U.S.-based assets he might have and prevents American citizens from dealing with him.

Derkach released tapes in May of phone calls in 2016 between then-Vice President Joe Biden and then-Ukrainian President Petro Poroshenko. He alleged that the tapes showed that Biden pressured Poroshenko to shut down an investigation into Burisma Holdings, a Ukrainian energy firm that had Hunter Biden as a board member.

Giuliani and other Trump allies have pushed a similar allegation about the Bidens.

The former New York mayor arranged interviews in early 2019 with former Ukrainian prosecutors who alleged that Joe Biden pressured Poroshenko to fire a prosecutor who was poised to investigate Burisma.

Joe Biden said during a speech in 2018 that he threatened to withhold $1 billion in loan assistance from Poroshenko if he did not fire Viktor Shokin, a former Ukrainian prosecutor general. But Biden has denied that the demand had anything to do with Burisma Holdings.

Derkach met with Trump lawyer Rudy Giuliani on Dec. 5, 2019, according to the parliamentarian’s Facebook page.

Derkach, who posted photos of the meeting, said that he and Giuliani discussed the creation of a group called the “Friends of Ukraine STOP Corruption.”

“Giuliani’s participation in the creation of this group will be very useful to us,” Derkach wrote. “In particular, he can help with joining the group of international experts, analysts, journalists and all those who are able to fulfill the tasks of the group and benefit the strategic relations between Ukraine and the United States.” 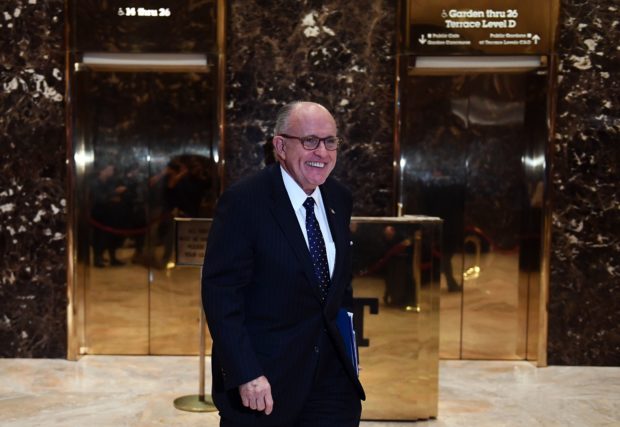 The Treasury Department said that from at least late 2019 to the middle of this year, “Derkach waged a covert influence campaign centered on cultivating false and unsubstantiated narratives concerning U.S. officials in the upcoming 2020 Presidential Election, spurring corruption investigations in both Ukraine and the United States designed to culminate prior to election day.”

“Derkach’s unsubstantiated narratives were pushed in Western media through coverage of press conferences and other news events, including interviews and statements.”

“Andrii Derkach and other Russian agents employ manipulation and deceit to attempt to influence elections in the United States and elsewhere around the world,” Treasury Secretary Steven T. Mnuchin said in a statement.

Treasury also said in the statement that Derkach likely targeted “the U.S. voting populace, prominent U.S. persons, and members of the U.S. government” through American media platforms and “pro-Russian lobbyists” in the U.S.

Derkach paid a Washington, D.C.-based lobbying firm, Global Management Association Corp., $12,000 for consulting work from May 10 to Aug. 10, according to documents the firm filed with the Justice Department under the Foreign Agents Registration Act.

The Office of the Director of National Intelligence has alleged that Derkach has published information aimed at undermining Biden’s presidential campaign.

“We assess that Russia is using a range of measures to primarily denigrate former Vice President Biden and what it sees as an anti-Russia ‘establishment,'” William R. Evanina, the director of ODNI’s National Counterintelligence and Security Center, said in a statement on Aug. 7.

In July 2017, Derkach called on Ukraine’s general prosecutor to open an investigation into allegations that the Ukrainian government colluded with the Democratic party in the U.S. during the 2016 election. Derkach’s request was based on revelations in a January 2017 article in Politico that outlined a series of contacts between a DNC consultant and the Ukrainian embassy.