A Christian man was sentenced to death in Pakistan for insulting the Prophet Muhammad, numerous sources reported.

Asif Pervaiz, a garment factory worker, was convicted and sentenced Tuesday in Lahore after being accused of blaspheming Muhammad in a text message he sent to a Muslim co-worker, according to Reuters.

Pervaiz’s lawyer, Saiful Malook, said the court rejected his client’s denial of the charges. Malook plans to appeal the decision.

Pervaiz claimed during his trial that he was accused by his co-worker Muhammad Saeed Khokher after refusing to convert to Islam. Khokher denied pressuring him to convert, according to the Associated Press.

After first serving a three-year prison term for “misusing” his phone to send the text message, Pervaiz will be “hanged by his neck till his death, according to a court order seen by Reuters.

Human rights groups have criticized Pakistan’s blasphemy laws for being used to intimidate religious minorities and to settle personal scores. Although a death penalty for blasphemy has yet to be carried out, accusations of blasphemy can lead to lynchings or street vigilantism. 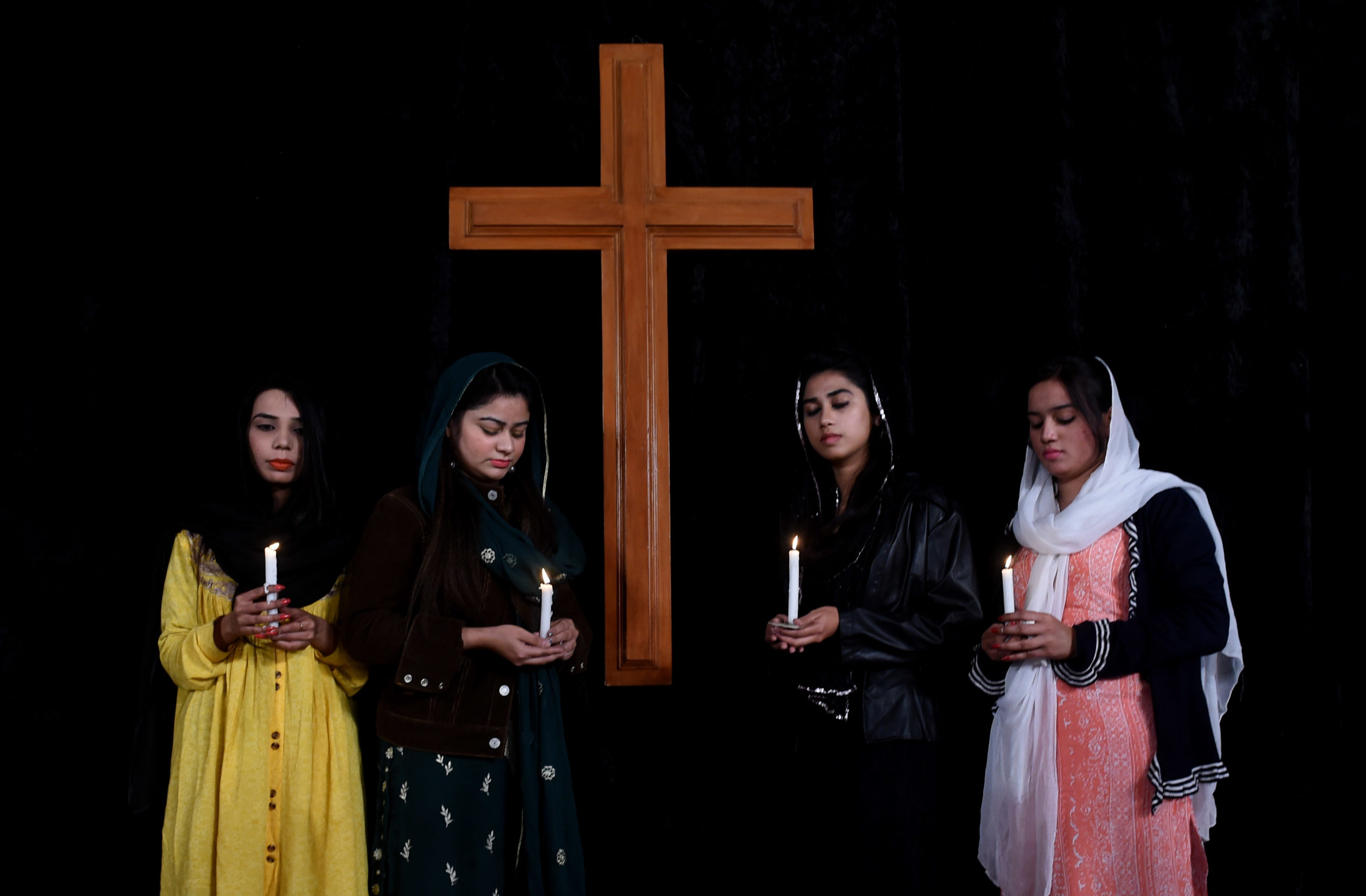 Pakistani well-wishers pray for the victims of a suicide attack on a church, in Lahore on December 20, 2017.
A suicide bomb attack on a Pakistan church claimed by the Islamic State group killed at least eight people and wounded 30 during a service on December 17, just over a week before Christmas. (ARIF ALI/AFP via Getty Images)

According to Open Doors USA, an advocacy group for persecuted Christians internationally, persecution against Christians in Pakistan is extreme and subject to “Islamic oppression.” Christians make up roughly 1.6% of the total population of Pakistan, according to Global Religious Futures by the Pew-Templeton Project. Often, Christians are treated as second-class citizens regardless of whether they are poor or middle-class.

A Punjab governor was killed by his own guard in 2011 after defending Asia Bibi, a Christian woman who is accused of drinking from a well belonging to Muslim women. Bibi spent nearly a decade languishing in a Pakistani prison after being accused of blasphemy against Muhammad, and was granted asylum in Canada in 2019. (RELATED: Persecuted Pakistani Catholic Asia Bibi Escapes To Canada, Lawyer Says) 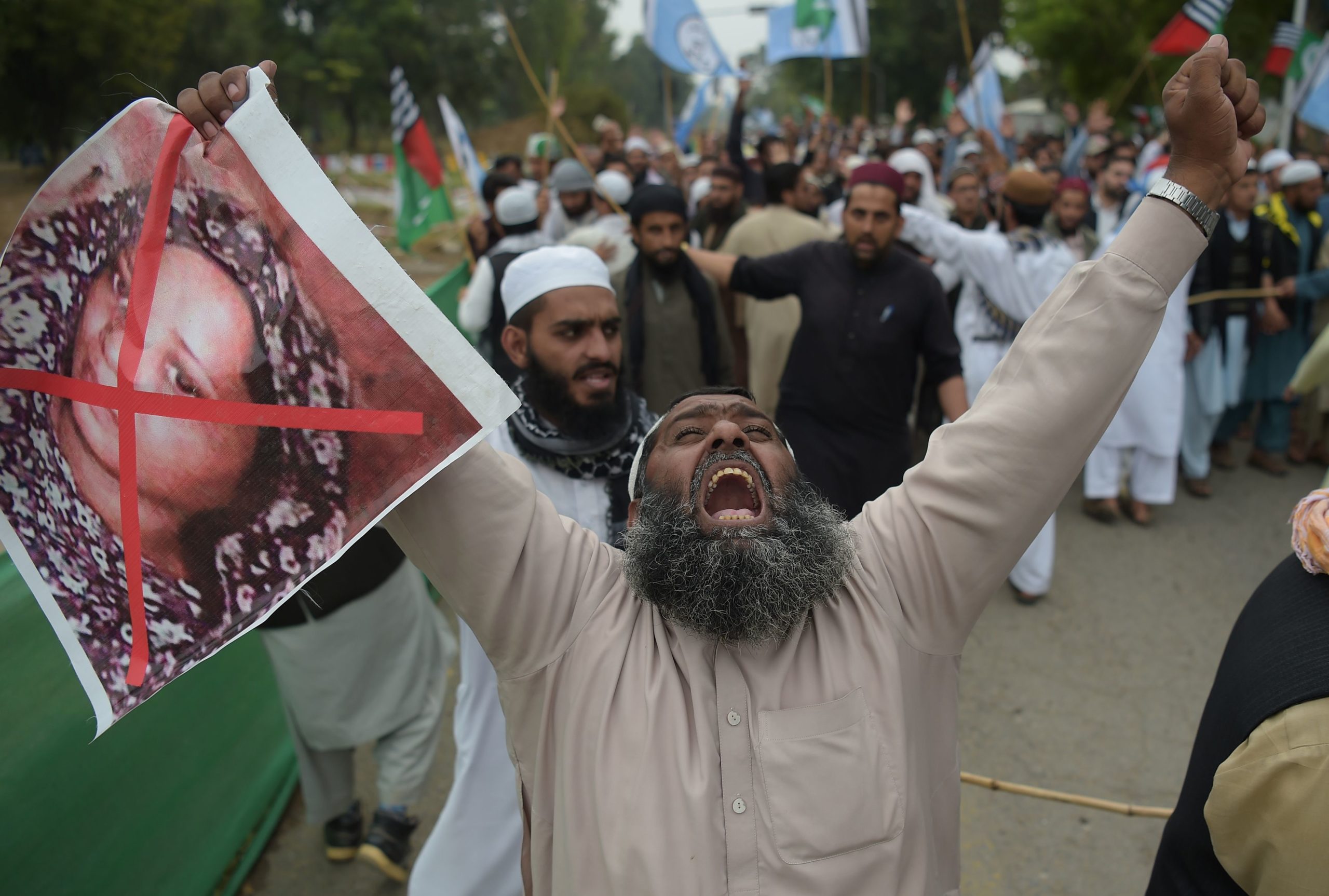 A Pakistani supporter of the Ahle Sunnat Wal Jamaat (ASWJ), a hardline religious party, holds an image of Christian woman Asia Bibi during a protest rally following the Supreme Court’s decision to acquit Bibi of blasphemy, in Islamabad on November 2, 2018. (AAMIR QURESHI/AFP via Getty Images)

Weeks prior to Pervaiz’s sentence, Tahir Naessem, a Pakistani-American, was shot dead in the courtroom while being tried for blasphemy in the city of Peshawar. The teenager who shot the man said he killed him for insulting Muhammad, according to Reuters, and he’s since been arrested and glorified as a “holy warrior” by supporters in Pakistan and Islamists who demand his release.