Democratic vice presidential nominee Kamala Harris continues to actively raise money for a Minnesota group that has bailed out several suspects charged with violent felonies, including murder and sex crimes.

Harris called on her followers to donate to the Minnesota Freedom Fund (MFF) in a June 1 tweet, saying that contributions to the fund would help post bail for people arrested during protests against the police-custody death of George Floyd, which sparked nationwide unrest and riots across the country.

The fundraising page Harris linked to in her tweet, which contains a picture of Harris and the slogan for her former presidential campaign, is still actively accepting donations. The Daily Caller News Foundation verified Harris’s link was still active by making a $1 contribution through the page Thursday afternoon. (RELATED: Here Are Three People Accused Of Violent Crimes Bailed Out Of Jail By Fund Kamala Harris Supported)

Among the people that MFF bailed out of jail after Floyd’s death include Jaleel Stallings, who according to Fox9 faces attempted murder charges for shooting at members of a SWAT Team during riots in late May. 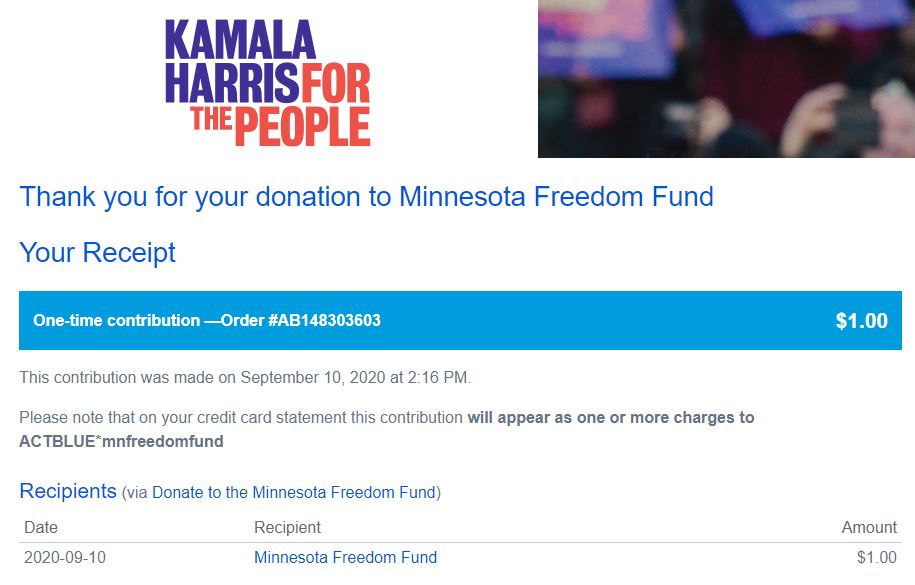 Harris’s fundraising page for the MFF remains active despite Biden’s condemnation of rioting and looting in late August.

“You know, as I said after George Floyd’s murder,” Biden said, “protesting brutality is a right and absolutely necessary. But burning down communities is not protest, its needless violence – violence that endangers lives, violence that guts businesses and shutters businesses that serve the community.”

At least 13 staffers working for Joe Biden’s presidential campaign also donated to the MFF in the first week following Floyd’s death, according to Reuters.

The Biden campaign and Harris’s office did not return multiple requests for comment. (RELATED: Biden Silent On Harris Supporting Bail Fund That Helped Rioters After He Condemned Riots, Violence)

It’s unclear how much Harris’s tweet has raised for the MFF. Overall, the group brought in $35 million since Floyd’s death.

At least one individual has committed additional violent crimes on the streets after being bailed out by the MFF.

Lionel Timms faces a felony third-degree assault charge in connection to an attempted robbery against a bar manager on Aug. 14 that left the victim with traumatic brain injury, Alpha News reported. Timms was released from jail in late July after the MFF posted his bail in relation to a separate third-degree felony assault charge he faces for allegedly assaulting a person on a bus on July 11.

MFF Interim Executive Director Greg Lewin issued a statement in response to Timms’ second arrest in late August, saying the fund was “deeply saddened and troubled” by the “recent attack of a popular and well-respected member of our community.”

Lewin said the Timms’ second arrest while out on bail was the failure of the criminal justice system.

“[W]e didn’t do enough to mitigate that damage by ensuring that Mr. Timss had the support he needed to come back to the community,” Lewin wrote. “It’s clear that we need to take steps to strengthen our internal procedures for supporting those we bail out.”

Other key individuals bailed out by the MFF include Christopher Boswell, a twice-convicted rapist who faces charges in two separate cases of sexual assault, assault and kidnapping, according to Fox9.

The group also paid $100,000 to bail out Darnika Floyd, who faces a 2nd-degree murder charge for stabbing her friend to death, the local outlet reported.