Remington introduced a shortened pistol version of its renowned Model 700 rifle in 2019. Called the 700 CP (chassis pistol), the new model was chambered for the .223 Rem.,.300 Blackout and .308 Win. cartridges, and used a 10-round detachable magazine and an aluminum chassis. The new lightweight bolt-action featured rifle-like accuracy in a compact platform, and its popularity encouraged Remington to grow the line in 2020 by introducing a version chambered for 6.5 mm Creedmoor and outfitted with an SB Tactical SBA3 arm brace.

A compact pistol version of the company’s Precision Chassis Rifle, the 700 CP comes from Remington with an SB Tactical SBA3 arm brace

–
Featuring Remington’s famous “three rings of steel” in a standard 700 short-action receiver, no changes have been made to the push-feed action. That’s why Remington went with a detachable, 10-round, single-column magazine, as using an AR-10 magazine would have required changes to the gun’s bolt in order to feed from both sides of the magazine.

Remington uses the same aluminum chassis on the CP that it uses on the Precision Chassis Rifle (PCR), and there is a receptacle at the rear for an AR-15-style receiver extension. The arm brace provides the shooter with an additional point of contact with the pistol, which should make it easier to shoot accurately.

The free-floating M-Lok-compatible handguard attaches to the aluminum chassis and has no accuracy-robbing contact with the pistol’s 12.5″ barrel. Remington threads the muzzle 5/8×24 TPI for suppressor and muzzle brake attachment, and the gun comes with a machined thread protector. The 6.5 mm Creedmoor CP is 5R-rifled with a 1:8″, right-hand twist.

Remington uses a paddle magazine release at the rear of the magazine well which the shooter can conveniently activate while grasping the magazine for removal. The bolt release is located just in front of the trigger, inside the trigger guard; depressing it while pulling the bolt rearward allows it to be removed from the pistol for easy cleaning. The two-position safety is located behind the bolt on the right, rear of the receiver. Unfortunately, there is no good way to maintain a firing grip and disengage the safety, but this is true of nearly every bolt-action chassis gun.

On top of the receiver is an extended zero-m.o.a. scope rail, machined with the common Picatinny dimensions; it attaches to the receiver top with four screws. The inclusion of the extended version makes sense, as some folks will choose to use long-eye-relief optics with the 700 CP.

Our test sample possessed a 4-lb., 8-oz., trigger straight out of the box. Adjustments can be made to the X-Mark Pro trigger without removing the action from the chassis. For the purposes of our testing, we adjusted the engagement screw for a crisp 3-lb., 12-oz., pull.

We also attached a piece of Picatinny rail (not included) to the bottom of the CP’s handguard and attached a Warne Precision Bipod with adjustable leg height. All firing was done from a seated rest using a DOA Tactical portable shooting bench. Five, five-shot groups were fired with each ammunition at 100 yds., with the results shown in the below accuracy chart.

Measuring just 0.85″, Federal’s Premium Gold Medal Berger 130-gr. OTM rounds produced the day’s best five-shot group. The average group size for the three ammunitions shot was 1.23″, and all of our evaluators were favorably impressed with the accuracy of this bolt-action pistol.

Looking back through our notes we found that we had fired the same loads through a 22″-barreled semi-automatic last year, and determined that the Remington CP’s 12.5″ barrel accounted for 20 percent less velocity, which corresponds to 32 percent less energy. Understanding the limitations of the shorter barrel is important for the ethical hunter, and limiting shot distances accordingly would be prudent.

One negative each evaluator commented on was that the SBA3 arm brace made it difficult to maintain a proper cheekweld. Despite this issue, shooters were able to produce some tight groups. Another frequent comment was that, as the shot was fired, the scope filled with a bright white flash—the result of the fireball created by still-burning powder as it left the barrel.

All found the action to run smoothly, and the oversize bolt knob made it easy to rapidly cycle the action. Rounds fed without a hitch from the polymer magazine. The crisp trigger made it possible to keep the optic’s reticle centered on the bullseye while adding the pressure necessary to break the shot. 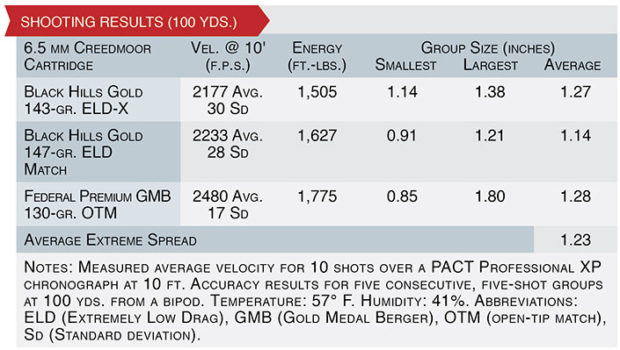 Given its somewhat neutered ballistics, what kinds of shooters will find the Remington 700 CP appealing? Quite a few, actually. Youngsters who have not yet developed the strength to support the weight of the forward portion of a rifle and need a shorter trigger pull, might find it ideal. Those who work within the confines of a small deer blind will also find that the reduced dimensions make for a much more comfortable fit.

Folks with disabilities, whether from disease or amputation, who find a full size rifle unwieldy, might find the 700 CP to be great for their needs. Additionally, ranchers and conservation officers who spend much of their day in a vehicle will likely find the CP a great gun for taking a quick and accurate shot. The new 700 CP, chambered in 6.5 mm Creedmoor, offers rifle-like accuracy and power in a compact platform.