President Donald Trump has “sacrificed” financially rather than profited from the presidency, Eric Trump said of his father during an interview with the Daily Caller News Foundation.

Eric Trump addressed whether the Trump family has profited through his father’s presidency in a Tuesday interview with the DCNF, and said that he thinks Trump “sacrificed more financially because of politics than probably any person in history.”

“Give me a break,” he added, responding to criticisms that the Trump family profits from the presidency. “It’s silly. It’s all they have.” (RELATED: ‘An Existential Threat’: Catholic Group Launches $9.7 Million Campaign To ‘Expose Biden’s Anti-Catholic Record’)

“Every person that checks in from a foreign country to one of our hotels, every single person, we take that money, we donate it to the U.S. treasury at the end of the year, I write up a big check every February to the U.S. treasury,” he continued, referring to the Trump International Hotels. One of these hotels is located blocks away from the White House in Washington, D.C.

Multiple lawsuits have been filed against the president alleging that he violated the emoluments clause of the Constitution by receiving revenue from foreign officials who stay at Trump hotels and businesses as president. A federal appeals court ruled against Trump in May and refused to throw out one of the lawsuits.

“My father gives his entire salary back to the U.S. government,” Eric Trump said. “Not only does he give it a salary, but then he’s taxed on it, cause it’s at that point it’s ‘phantom income.'”

He also noted that the Trump family members were specifically prohibited from taking any of the coronavirus Paycheck Protection Program funds themselves. ProPublica and Business Insider have reported that businesses connected to Trump family members and associates did receive PPP funding.

“My name was personally in the legislation saying that not just the Trump family, but us individually, at no point could we access any Paycheck Protection Program grants that were offered to every other hospitality company,” he said.

“That’s fine,” he added. “We’re very, very fortunate as a family. But my father has sacrificed tremendously from a financial standpoint, and he would do it all all over again. He was fortunate to be in a position where he could do that, we could do that as a family.” 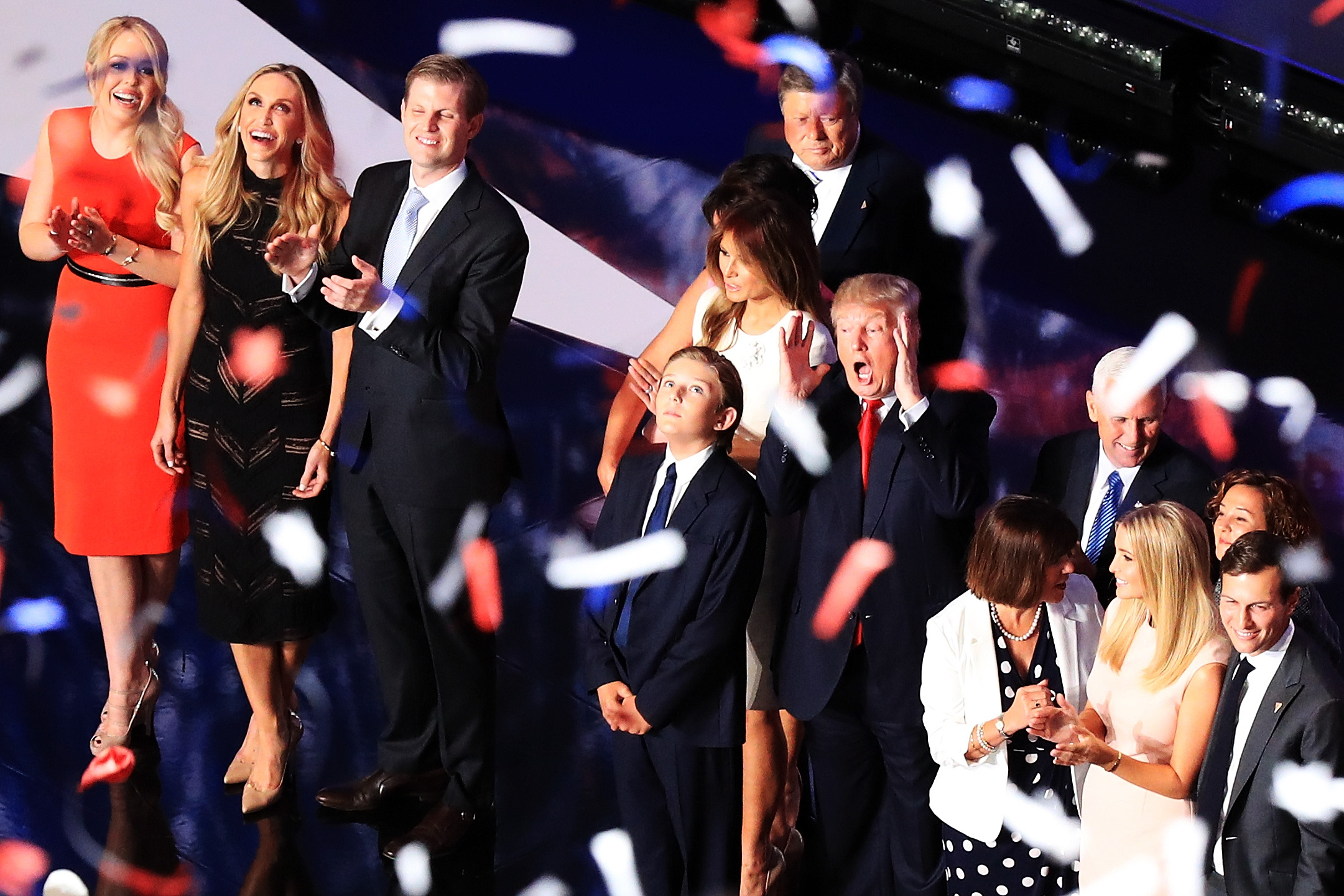 Donald Trump and Mike Pence with their families at the RNC July 21, 2016. (Chip Somodevilla/Getty Images)

Eric Trump added that someone should ask 2020 presidential candidate Joe Biden how he can afford his mansion in Wilmington, Delaware, saying, “I wonder, making what a senator made 10 years ago, how you could afford to buy that house. Doesn’t exactly line up.”

“The hypocrisy is pretty crazy to say the least,” he added.

Donald Trump’s critics have called for him to release his tax returns since 2015 when he first announced his campaign. Though bits and pieces of his returns have been reported, most of his tax history is still private.