“This is not like embedding with the Marines in Fallujah,” he told the National Journal in an article posted Monday about the White House press corps’ reaction to indoor rallies amid the ongoing coronavirus threat. “It is like you are taking your family with you to Fallujah.”

Karl told the outlet that while some news organizations chose to keep their reporters out of the Tulsa, Oklahoma venue where Trump held his last indoor rally, Las Vegas was “the first time that everybody stayed out except for the pool.” 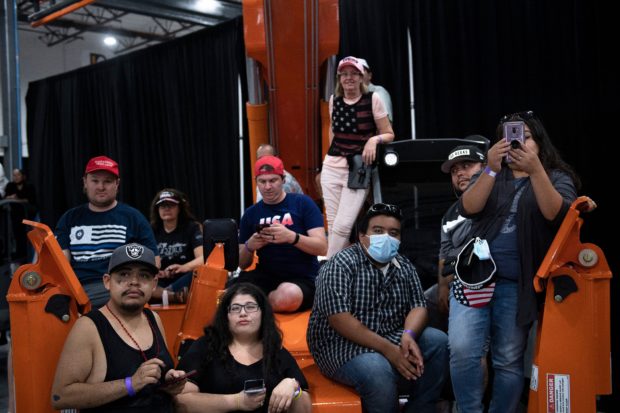 People listen while US President Donald Trump speaks during an indoor campaign rally at Xtreme Manufacturing in Henderson, a suburb of Las Vegas, Nevada, on September 13, 2020. (Photo by BRENDAN SMIALOWSKI/AFP via Getty Images)

Trump held the rally Sunday night in the Las Vegas suburb of Henderson, Nevada, at a facility owned by  Xtreme Manufacturing. The company’s owner will be fined $3,000 for violating the state’s coronavirus restrictions on large gatherings, CNN reported. A Trump campaign official told the network that all attendees received temperature checks, access to hand sanitizer, and were provided masks they were encouraged to wear.

Meanwhile, Trump campaign spokesman Tim Murtaugh defended the rally, comparing it to ongoing protests. “If you can join tens of thousands of people protesting in the streets, gamble in a casino, or burn down small businesses in riots, you can gather peacefully under the First Amendment to hear from the president of the United States,” he said.