Pro-Palestine protests occurred in at least 16 cities including Washington, D.C., Chicago, and Brooklyn, New York since July 1, according to the Samidoun Network, an international group of activists who support Palestinian prisoners. Protesters carried the flags of known terrorist groups, chanted “death to America,” and advocated for the release of Palestinian political prisoners linked to terror groups.

The Samidoun Network was a major organizer of the “Day of Rage” protests and has since announced additional nationwide “Days of Action” from Sept. 18 through Sept. 26.

Samidoun Palestinian Prisoner Solidarity Network, along with @WOLPalestine and other members and supporters of the @Ny4Palestine Coalition, have gathered for a massive rally and march in Bay Ridge, Brooklyn as part of the #DaysOfResistance for Palestine. pic.twitter.com/f9QmNIOuZw

“Days of resistance” protesters carried Hezbollah flags and Popular Front for the Liberation of Palestine (PFLP) flags, according to photographs posted by the Samidoun Network Aug. 7.

The PFLP was designated as a foreign terror organization by the U.S. in Oct. 1997, according to the State Department. Hezbollah is an anti-Israel Shiite Muslim militant group and political party that operates as “a state within a state” in Lebanon, according to the Council on Foreign relations.

“You all know the word annexation must be very familiar to this country because where have we heard it before? Where have we seen it be done before? To our indigenous brothers and sisters here in the United States,” Kiswani said, followed by cheers from the crowd, video shows.

Kiswani mentioned American “manifest destiny, thinking that they could just murder people and take their land, the way that they did in Palestine,” video shows. 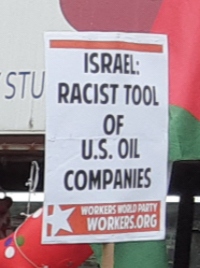 One protester’s sign said, “Israel: racist tool of U.S. oil companies,” followed by a website address to the Workers World Party, a Marxist-Leninist group that organizes and fights “for a socialist revolution” in the U.S. 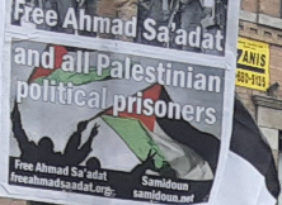 One protester concluded her speech by saying, “Free Palestine! U.S.A. out of our world,” followed by cheers from the crowd, video shows. A second speaker who was introduced as part of the Communist Party for Socialism and Liberation said in Arabic, “death to Israel, death to America” and referred to the protest as a communist movement, video shows.

Other protesters expressed support for Hamas and denied that it was a terrorist organization despite being declared one by the U.S. Department of State in 1997, video shows. One protester said “they’re not a terrorist organization,” after he was asked if he supports Hamas, video shows. “If they’re fighting for their freedom, their land, I support them,” another protester said in the video.

The Samidoun Network organized “days of resistance” between Aug. 7 – 9 in the memory of Ghassan Kanafani, calling on Palestinians and “social justice movements” to participate in marches and demonstrations. Samidoun said the purpose of the demonstrations is to “remind the world that the Palestinian people will continue to rise and confront all attempts of liquidation and destruction of the cause of Palestine and resist dispossession, exile and genocide,” according to the group’s website.

Kanafani was an active member and spokesperson for the PFLP who defended the acts of the terror group, according to the Times of Israel. His work as a novelist and activist reportedly affected how anti-Israel Arab organizations strategized.

A “days of resistance” event in Anaheim, California, August 8 featured a speaker who accused the U.S. of “genocide” during their speech, video shows. (RELATED: Trump Expects ‘8 Or 9’ More Arab Countries To Join Israel Peace Agreement, Including Saudi Arabia)

“In Palestine, the Zionist state chooses incarceration as a tool of … genocide. That is exactly what has long happened in the U.S., particularly against black communities,” the speaker said, video shows.

“Day of Rage” protests on July 1 in Boston were organized by Boston Boycott, Divestment, Sanctions (BDS), a pro-Palestinian movement that claims Israel is “occupying and colonizing” Palestinian land while discriminating against Palestinian people, according to the group’s website.