The attorney of one of the officers who was not indicted by a grand jury over the shooting of Breonna Taylor said that the decision “shows that the system worked,” numerous sources reported.

“The grand jury’s decision to not indict Sgt. Mattingly or Det. Cosgrove shows that the system worked and that grand jurors recognized and respected the facts of the case,” the statement, tweeted by WHAS anchor Hayley Minogue, said. (RELATED: Kentucky Attorney General Daniel Cameron Announces Grand Jury Indictment Of One Of Three Officers In Breonna Taylor Shooting Case)

“The death of Breonna Taylor is a tragedy. But these officers did not act in a reckless or unprofessional manner. They did their duty, performed their roles as law enforcement officers and, above all, did not break the law.”

Here’s the statement from Sgt. Mattingly’s attorney on the grand jury’s decision not to indict: pic.twitter.com/V0ftiI7hNX

Sgt. Mattingly’s attorney: “These officers did not act in a reckless or unprofessional manner. They did their duty, performed their roles as law enforcement officers…”

Here’s our reporting on what’s next for the two officers not indicted: https://t.co/ZeGbn54WXg pic.twitter.com/px7dTOeGmZ

Mattingly’s attorney, Kent J. Wicker, said the grand jury’s decision not to charge his client or Cosgrove “shows that the system worked and that grand jurors recognized and respected the facts of the case.”

The officer who shot and killed Breonna Taylor was not charged, AG says. https://t.co/5fpjLRJXU4

Former Louisville Metro Police Department officer Brett Hankison was indicted on three counts of wanton endangerment in the first degree in the Breonna Taylor shooting case, a grand jury reported Wednesday, according to the Courier Journal.

Mattingly and another officer involved in the case, Myles Cosgrove, were not indicted. Kentucky Attorney General Daniel Cameron said during a press conference that Mattingly and Cosgrove were “justified in their use of force after having been fired upon.” 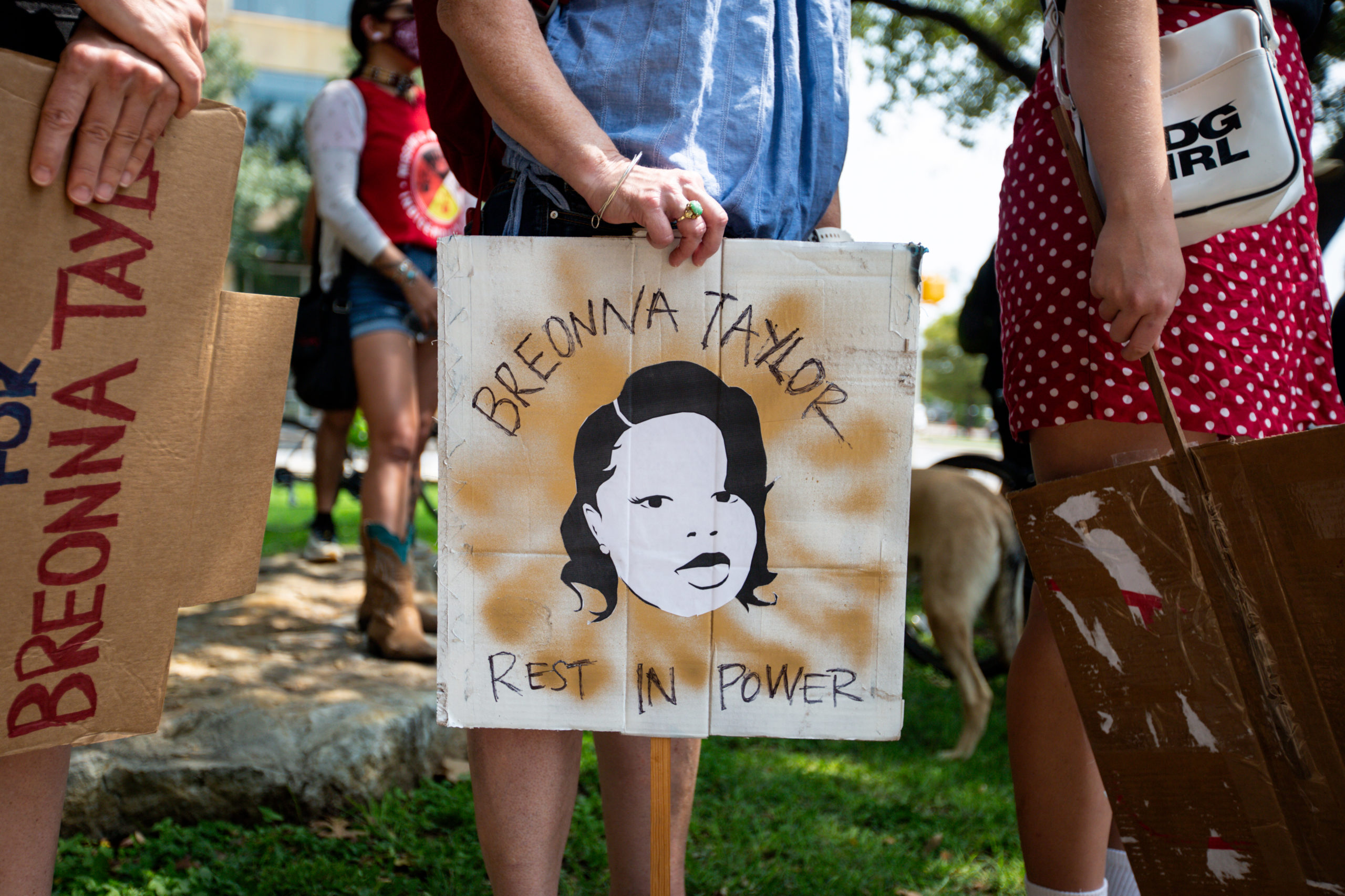 AUSTIN, TX – SEPTEMBER 19: Community members gathered for a Stand 4 Breonna event to demand justice for Breonna Taylor on September 19, 2020 in Austin, Texas. Taylor, 26, was killed by Louisville police officers as she slept in her apartment on March 13, 2020. (Photo by Montinique Monroe/Getty Images)

The decision in the case comes more than 6 months after Taylor was fatally shot in her apartment by Louisville Police while they were executing a no-knock warrant in March. The officers alleged they were fired upon by Taylor’s boyfriend, Kenneth Walker.

Protests erupted in Louisville following the grand jury report. The National Guard was reportedly activated earlier in the day Wednesday, and the county is under a 72-hour curfew.