Police are trained to evaluate situations to determine whether the use of deadly force with a firearm is necessary, but they often need to rely on situational discretion for scenarios that aren’t clear-cut, according to two officer training experts.

Officers rely on a concept called the “use of force continuum,” where aggressiveness of tactics escalates if a situation becomes dangerous or a subject becomes uncooperative, according to John Jay College of Criminal Justice professor and 10-year Israeli police veteran Maria Haberfeld and former Detroit and Arizona special operations police officer and professional instructor Darryl Rivers.

Their comments come amid nationwide unrest and calls to reform police departments following what many perceive to be an unjust use of force in the May death of George Floyd, who died after a Minneapolis police officer kneeled on his neck for nearly 9 minutes.

Police officers have also been criticized for the use of deadly force in the shooting of Jacob Blake, shot multiple times during an arrest attempt in Kenosha, Wisconsin, in JUNE?. Blake survived the shooting.

The continuum of force concept begins with an officer’s presence, followed by physical force, then non-lethal options like Tasers and pepper spray, escalating all the way up to lethal force with a firearm, the two experts said.

Haberfeld described the process in detail to the Daily Caller News Foundation, touching on the specific procedures officers are instructed to use.

“It starts with their presence,” the professor, who spearheads a prominent New York City Police Department training program in New York City, told the DCNF in a phone interview. “An officer is there in a uniform and it should be enough to insist compliance, but of course, that’s not in real life. And then from mere presence, it progresses to verbalization.”

“They express whatever desires they have in achieving compliance,” she said. “If that doesn’t work, they can elevate the voice to a command voice which is more powerful, more vibrant. It can be sort of loud, and if this doesn’t work then they need to actually use physical interactions.”

Physical interactions, according to Haberfeld, can consist of grabbing, pulling, pushing, or in extreme cases punching, Haberfeld said. If hands-on means don’t achieve compliance, the next step is the use of blunt implements like batons or non-lethal options like pepper spray or a Taser, she said.

If compliance is not achieved with any of the above means and the suspect is threatening the lives of the police officers or those around them, lethal force with a service weapon may be warranted, according to both Rivers and Haberfeld.

Haberfeld said the continuum encompasses anywhere between five and seven steps, but it’s anything but an exact science for cops in real-world scenarios — often steps need to be skipped if a dangerous situation is present.

“When you have an active shooter situation like in Nevada in Las Vegas, right? This is not the time to identify yourself and ask for compliance,” Haberfeld, told the DCNF. “You go into a domestic violence situation on the other hand, and one of the individuals is holding a gun to their partner’s head, this is not always the time for verbalization.”

Rivers, who helped construct the use of force policy for the state of Arizona, said “Each situation warrants you to begin or escalate from any of those areas [of the continuum]. So, obviously, if someone has a knife and they’re charging at me, well I’m not going hands on. They’re exercising a use of force that could be deadly to me, so I have to meet that or go higher than that.”

“If someone comes at me with a bat, then I recognize that pepper spray is probably not going to work,” Rivers continued. “If he hits me in the head, I can die. If someone comes with a bat — even though it’s not a firearm, it’s not a knife — it’s still a weapon that can be used to take my life, so at that time my use of force needs to be higher than that individual that’s coming at me.” 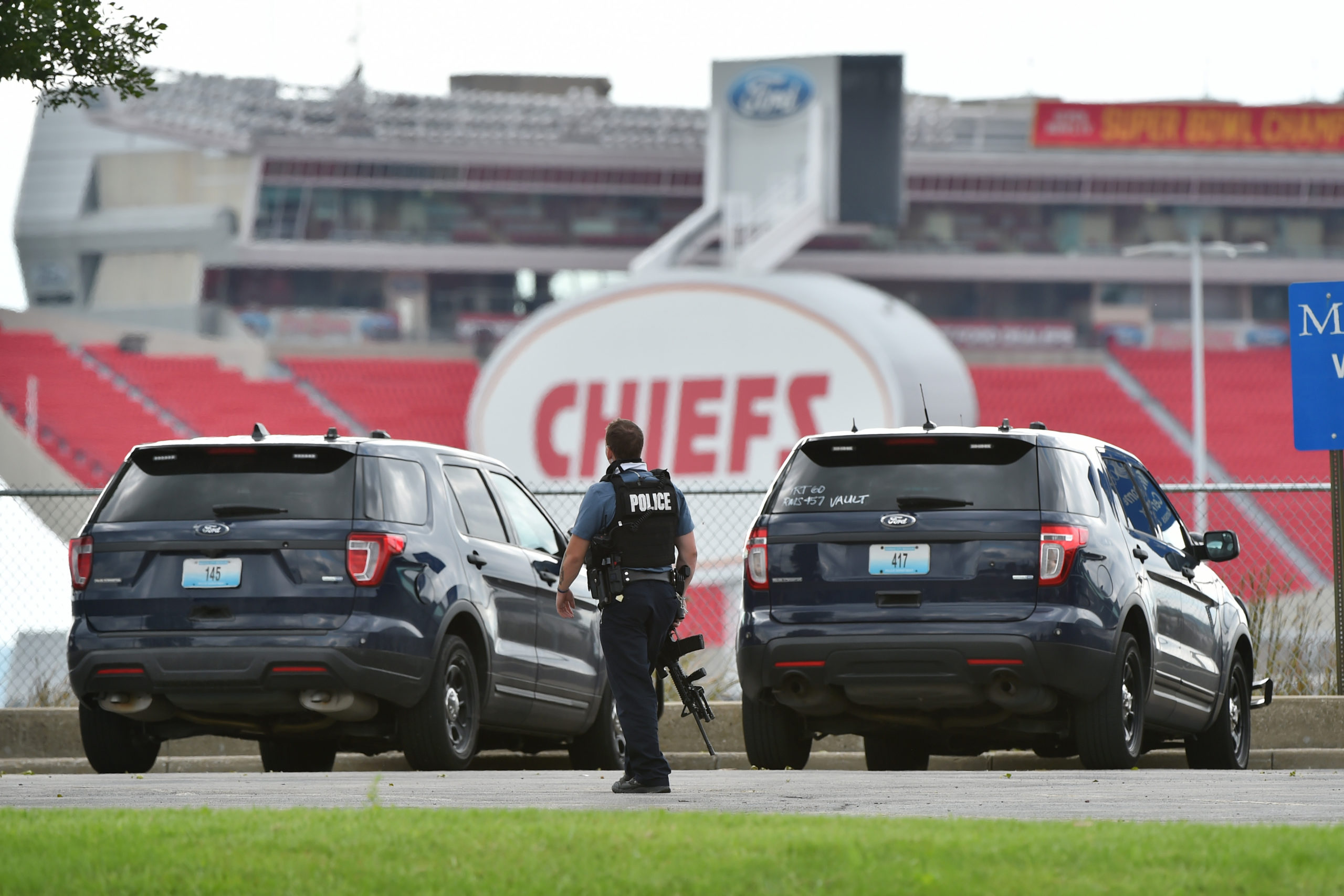 A member of the Jackson County Sheriff’s Emergency Response Team walks along the perimeter of the Truman Sports Complex as police are involved in a standoff with gunman at the complex on September 12, 2020 in Kansas City, Missouri (Ed Zurga/Getty Images).

Rivers and Haberfeld agreed that officer discretion on what steps to utilize in specific events is vital to the success of the continuum.

“[Discretion is] a must thing,” Haberfeld said. “There is no way you can be a police officer without it. There’s no way you can run all the scenarios during the training because what happens on the streets is more surreal than anyone could envision. And discretion is a necessary part of any officer’s tool kit because they cannot do without it.”

“You never know if that person has a gun in their pocket,” Rivers said. “You come across scenarios like this and they’re very decision-heavy.”

The use of force continuum, although it’s the main component of most department-level training programs, has its flaws, according to Rivers. (RELATED: ‘Very Low Level’, ‘The Worst’: Traditional Police Use Of Force Training Is Lacking, Law Enforcement Experts Say)

“People kind of get it mixed up, so sometimes officers will feel as though they have to go through the entire continuum in order to not get in trouble. ‘Oh, I can’t start with my Taser, I have to go hands on.’ And those officers generally get hurt. Then you have officers that just leapfrog a couple of steps when it’s not necessary to do so.”

He added that heightened media and political scrutiny on law enforcement following the death of Floyd is stymying the proper execution of the continuum.

“Everyone leans to [being] overly passive now because no one wants to use force nowadays and the citizens know that,” River said. “That is a major problem. I know officers that absolutely love their job, but they’re scared to do it now.”

Dorothy Caronna contributed to this report.