A record number of Americans are expected to vote by mail this November election, with at least more than one million ballots cast already.

Despite an early surge in mail-in voting, it’s very likely the results of some states – including swing states – might not be decided for weeks after Nov. 3.

Here are all the states that have extended their mail-in ballot receipt deadlines:

A federal judge ordered Georgia to extend the date by which they count mail-in ballots by three days. Any ballots postmarked by Election Day and delivered to county election officials by 7 p.m. ET on Nov. 6 will be counted, according to CNN.

U.S. Northern District of Georgia Judge Eleanor Ross said “extraordinary times” call for extraordinary measures, granting relief to voters who may have had their ballots disqualified due to late arrival, per the report.

“The Court notes it is reluctant to interfere with Georgia’s statutory election machinery. However, where the risk of disenfranchisement is great, as is the case here, narrowly tailored injunctive relief is appropriate,” Ross wrote, per CNN. “Consequently, the Court finds that extending the absentee ballot receipt deadline by three … business days is appropriate.”

“The burden imposed by Indiana’s noon Election Day receipt deadline, which threatens to disenfranchise thousands of eligible absentee voters for reasons that, because of the COVID-19 pandemic, are outside their control, is very substantial,” she wrote.

Barker also noted that many voters who vote by mail could have their vote go uncounted if it arrives late due to a lag in the postal service. While voters could vote in person if their mail-in ballot doesn’t arrive by election day, “voters typically are not informed of whether their ballots arrived on or before the deadline.”

Michigan state Judge Cynthia Stephens ruled absentee ballots postmarked by Nov. 2 and received within two weeks of the election can still be counted, citing delays in the postal service.

“The evidence in this case stands uncontroverted and establishes that the mail system is currently fraught with delays and uncertainty in light of the COVID-10 pandemic,” Stephens said.

The policy adjustment could help avoid a similar catastrophe that occurred in August when more than 10,000 absentee ballots were rejected, with more than half tossed away due to arriving late.

Democratic New Jersey Gov. Phil Murphy signed an executive order Aug. 14 that modified the state’s vote-by-mail system, including extending the deadline for mail-in ballots received. If ballots are postmarked on or before Nov. 3, they will be counted as long as they are received by Nov. 10.

Further, ballots received without a postmark that are received by the county board of elections within 48 hours of Election Day will be counted, per the order.

North Carolina election officials announced Sept. 22 that absentee ballots postmarked on or before Nov. 3 will be counted as long as they are received within 9 days after Election Day.

Prior to the announcement, absentee ballots had to be received by Nov. 6.

So far, nearly 950,000 absentee ballot requests have been submitted in the state. 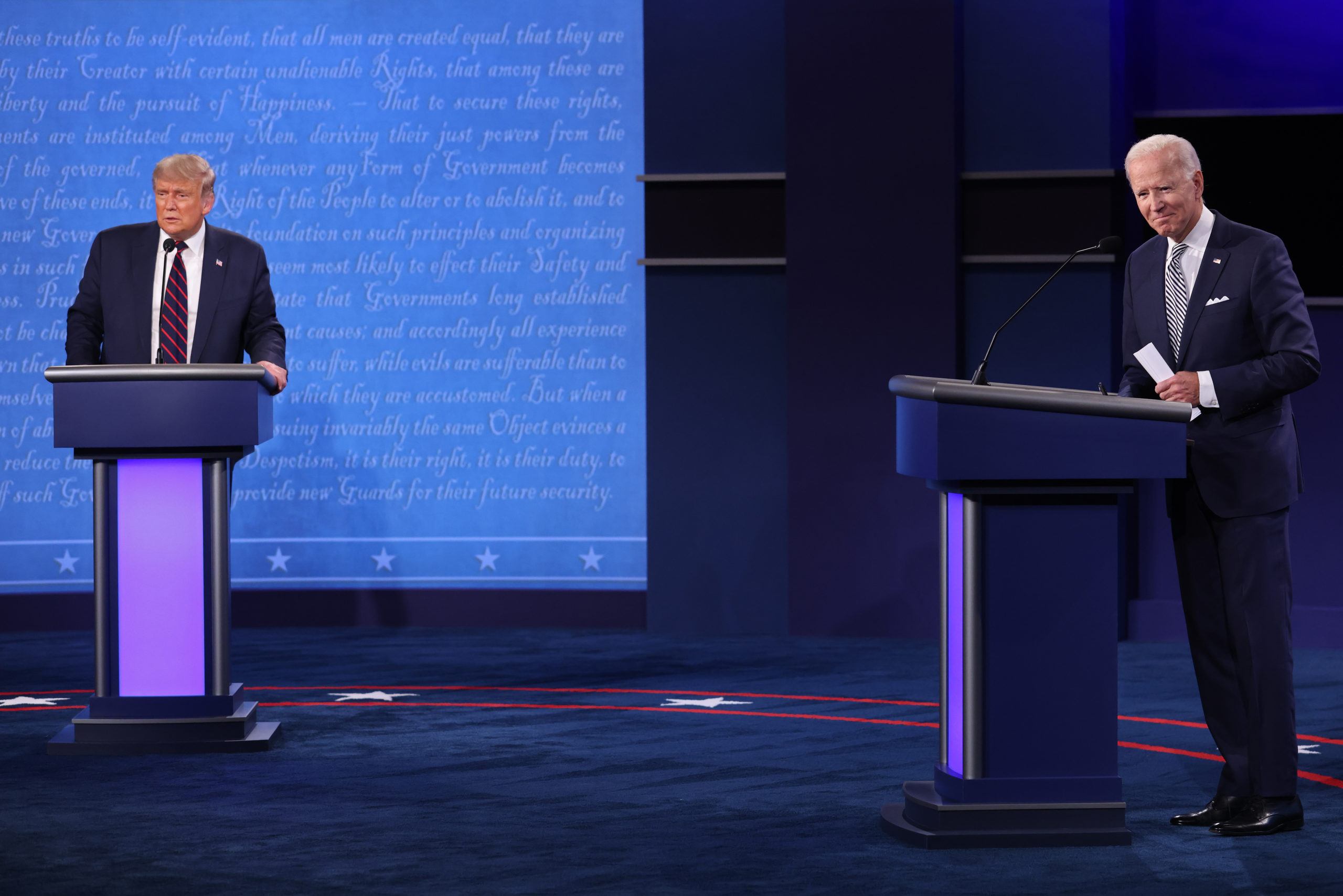 CLEVELAND, OHIO – SEPTEMBER 29: U.S. President Donald Trump and Democratic presidential nominee Joe Biden look out to the audience at end of the first presidential debate at the Health Education Campus of Case Western Reserve University on September 29, 2020 in Cleveland, Ohio. This is the first of three planned debates between the two candidates in the lead up to the election on November 3. (Photo by Win McNamee/Getty Images)

Mail-in ballots postmarked by 8:00 p.m. Election Day will be counted as valid through Nov. 6. The court noted an increase in mail-in ballots could slow United States Postal Service delivery standards and time and disenfranchise voters.

“Particularly in combination with the allowance of drop boxes, this substantially increases the likelihood of confusion, as well as the possibility that votes will be cast after 8:00 p.m. on Election Day.”

Pennsylvania is also a battleground state, with Trump narrowly winning by less than 1 percentage point. However, recent polls show Biden has a slight lead over Trump.

A federal judge ruled Sept. 21 that absentee ballots in Wisconsin postmarked on or before Election Day can be counted up to six days after the election.

Trump won Wisconsin by less than 23,000 votes in 2016, making the state another battleground.