The president, who has been undergoing treatment for coronavirus at Walter Reed hospital since Friday afternoon, announced in a brief Twitter video that he intended to give his supporters outside “a little surprise visit.” (RELATED: ‘Oh Yeah, I Harangued [Trump]’: Chris Wallace Sarcastically Fires Back At Steve Cortes In Testy Exchange)

After touting the hard work of the staff at Walter Reed and offering his thanks to the doctors, nurses and first responders, Trump added, “I also think we’re going to pay a little surprise to some of the great patriots that we have out on the street.”

“They’ve been out there for a long time and they’ve got Trump flags,” he continued. “They love our country. So, I’m not telling anybody but you, but I’m about to make a little surprise visit.”

In a matter of minutes, the presidential motorcade had started its tour outside the hospital.

It appears @realDonaldTrump has left the Walter Reed to greet supporters.@SpectrumNews1WI pic.twitter.com/0vskb1SQZz

.@realDonaldTrump just made another pass, waved to the media on the other side of the road at Walter Reed. @SpectrumNewsDC #coronavirus #trump pic.twitter.com/QoE759Gmql

Trump drives by the press and supporters outside Walter Reed hospital. pic.twitter.com/3phtKthqTH

Trump could be seen in the back seat of one of the vehicles, wearing a mask and waving and giving a thumbs-up as the parade of cars passed by. 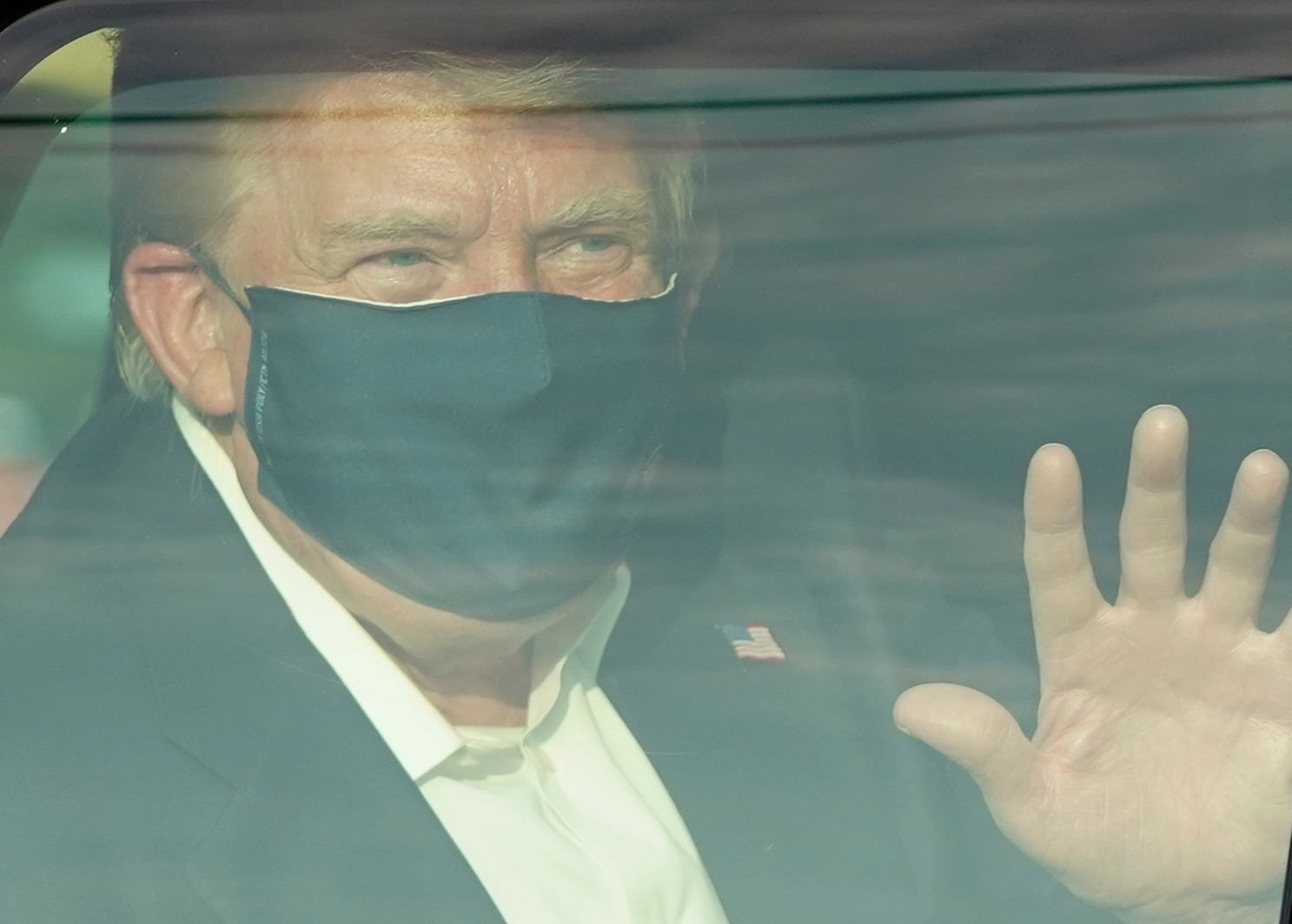 A car with US President Trump drives past supporters in a motorcade outside of Walter Reed Medical Center in Bethesda, Maryland on October 4, 2020. ALEX EDELMAN/AFP via Getty Images

A number of media personalities immediately criticized Trump for the move, saying that he was putting the agents in the car with him at risk of contracting coronavirus.

Trump has gotten in a car so he can wave to supporters outside Walter Reed. As you can see from footage, this meant multiple agents riding in a car with Trump while he carries the coronavirus pic.twitter.com/FIk4CtApnu

Trump keeps putting others at risk needlessly including the Secret Service agents charged with protecting him. Shameful. https://t.co/rHNfir6cXK

Trump just tweeted that he’s going to visit supporters outside of Walter Reed. A man infected with COVID is going outside, possibly putting staffers and more at risk.

The agents in the vehicle with Trump were reportedly wearing protective gear including N-95 masks and gowns over their clothing.

On top of ballistic vest, Secret Service agent in the front seat wearing gloves, face shield, N95 mask and gown. More threats than usual to contend with on a trip that certainly doesn’t appear to have been necessary. https://t.co/1RezQG1beV

In addition, as CBS’ Catherine Herridge reported later, Trump’s brief excursion was approved by his doctors.

NEW: Doctors okayed POTUS drive-by supporters. Deputy Press Secretary tells @markknoller “Appropriate precautions were taken in the execution of this movement to protect POTUS + all those supporting it, including PPE…cleared by the medical team as safe to do.” @CBSNews

Reports from earlier in the day indicated that Trump was doing well and could be discharged from the hospital as early as Monday.