A Muslim Pakistani professor allegedly shot and killed a minority professor a day after the two disputed over religion, police said according to the Associated Press.

Professor Farooq Maad and another man shot and killed Professor Naeem Khattak as he was driving to his college, police said according to the AP. Khattak belonged to the Ahmadi faith, a minority religion that Sunni militants have targeted in the past because they believe Ahmadis are heretics.

Ahmadis originated in British-controlled India in the 19th century and see themselves as an Islamic movement, but are regarded as heretical by orthodox Muslims and forbidden from calling themselves Muslims or using Islamic symbols in their religious practices, according to Reuters. Pakistan is mainly a Sunni Muslim country of more than 200 million people. 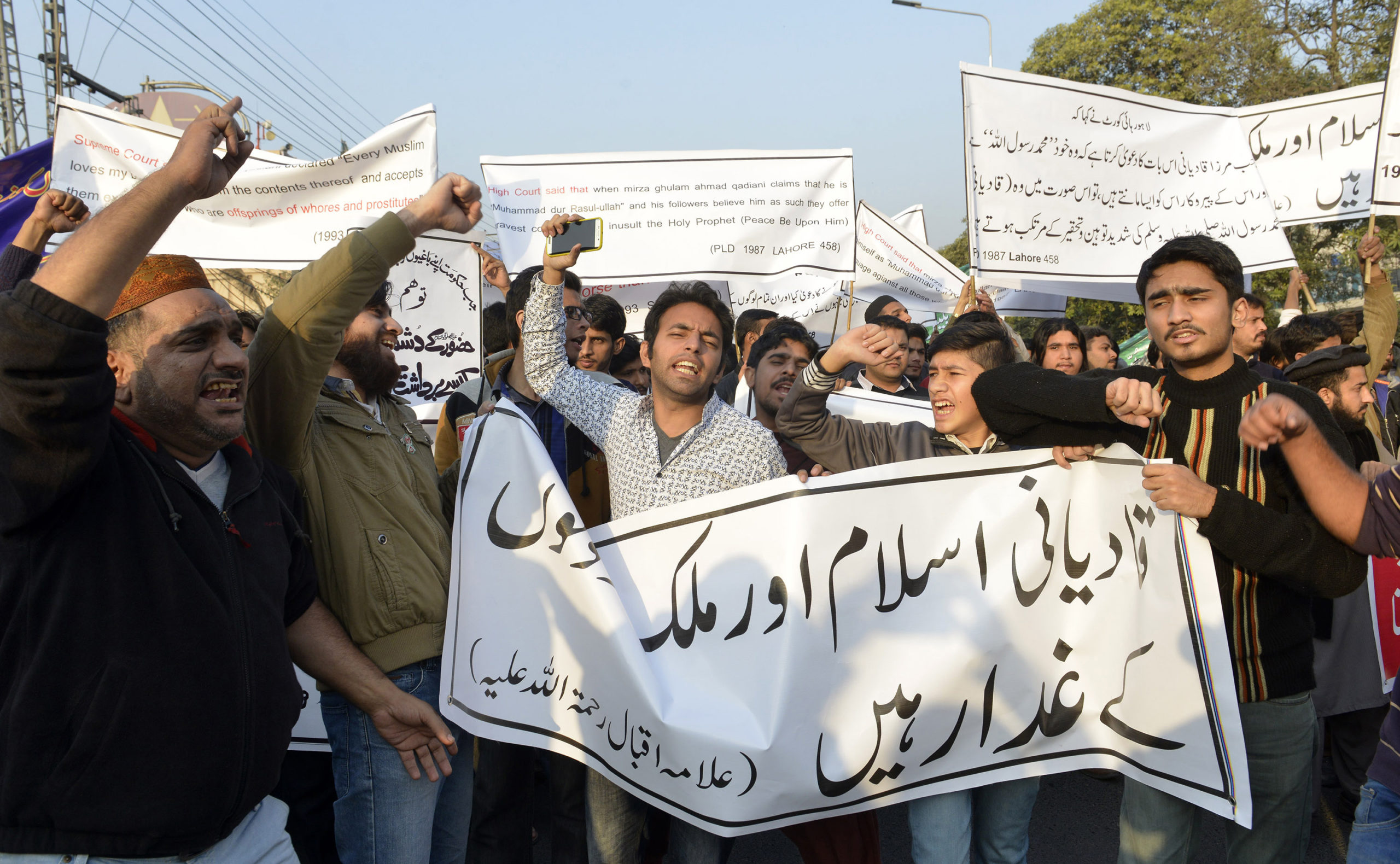 Pakistani traders shout slogans during a protest against the arrest of a shopkeeper in Lahore on December 14, 2015. (ARIF ALI/AFP via Getty Images)

Police say the victim was after a verbal brawl over religious issues, and that Khattak had received threats and demanded protection for people belonging to the Ahmadi community.

“The government has failed in providing protection to Ahmadis,” Saleem Uddin, a spokesman for Pakistan’s Ahmadi community, said according to the AP.

Ahmadi homes and places of worship have been attacked by Islamic extremists and are among the minority faiths in Pakistan to face religious discrimination. A decade ago, 93 people were killed when suspected Taliban militants threw grenades at worshippers at two Ahmadi mosques, which Human Rights Watch reportedly said was likely motivated by the belief of militant Sunni groups that Ahmadis are infidels, according to the BBC. In May 2018, a mob led by Muslim clerics attacked a 100-year-old Ahmadi mosque in eastern Pakistan, spurred by the words of a cleric, according to Reuters. 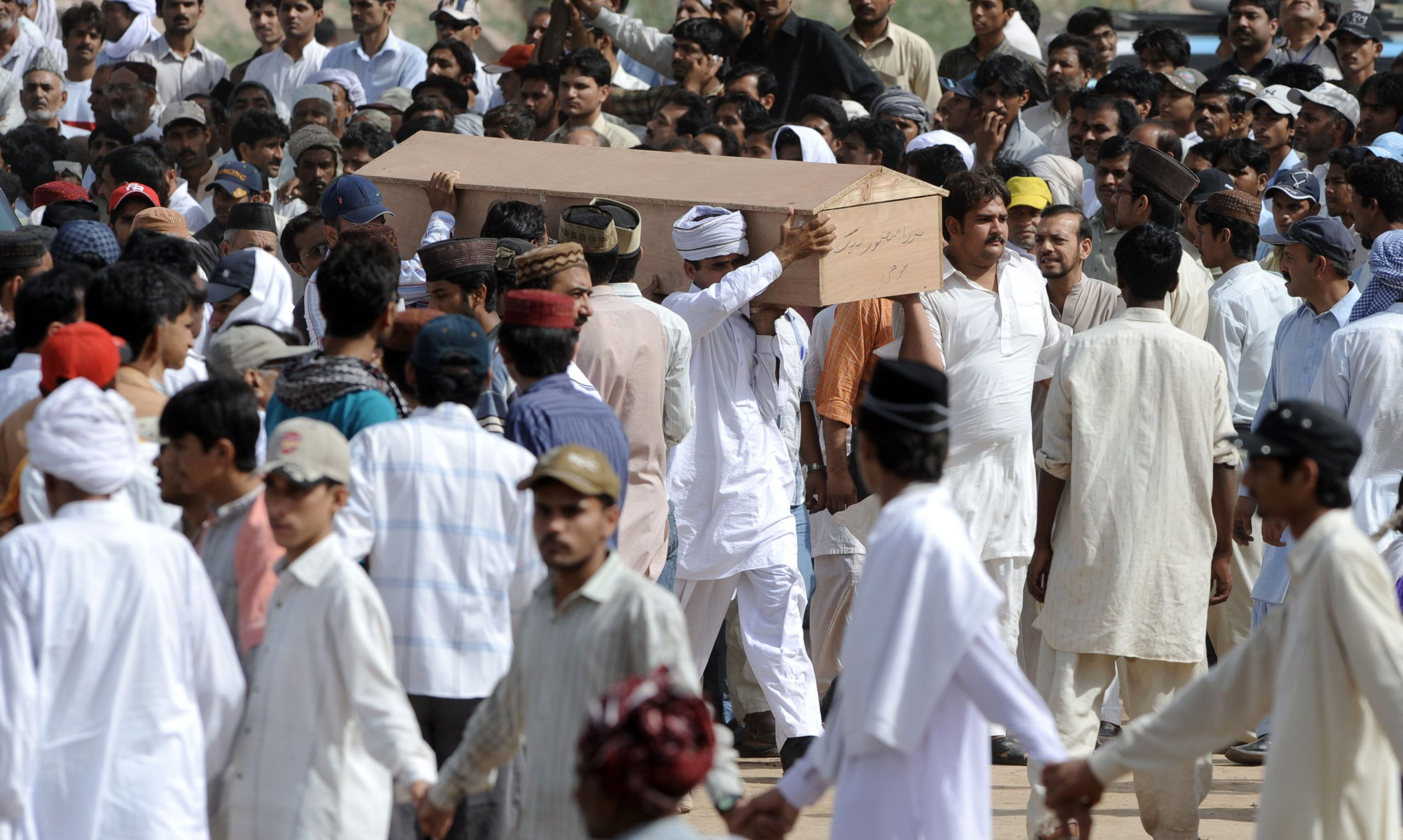 Pakistani Ahmadi community members carry a coffin of a victim during a funeral ceremony at Rabwah, the headquarters of the Ahmadis in Chenab Nagar on May 29, 2010. Gunmen wearing suicide vests stormed two Pakistani mosques belonging to a minority sect in Lahore, bringing carnage to May 28 prayers and killing around 80 people. (FAROOQ NAEEM/AFP via Getty Images)

In September, a Christian man was sentenced to death in Pakistan for insulting the Prophet Muhammad, which is illegal under the country’s blasphemy laws that human rights groups have criticized as being used to intimidate religious minorities and to settle personal scores.

Tahir Naessem, a Pakistani-American, was shot dead in a courtroom while being tried for blasphemy in the city of Peshawar. The teenager who shot the man said he killed him for insulting Muhammad, according to Reuters, and he’s since been arrested and glorified as a “holy warrior” by supporters in Pakistan and Islamists who demand his release. (RELATED: Christian In Pakistan Sentenced To Death For Insulting The Prophet Muhammed)