Early reports indicated that Pence would seek to tie Harris, Biden and other Democrat leaders to the riots and violence spilling over from peaceful protests taking place in cities across the country. In turn, Harris was expected to center her attacks on Pence — the head of the White House coronavirus task force — and the rest of the administration’s track record on handling coronavirus. 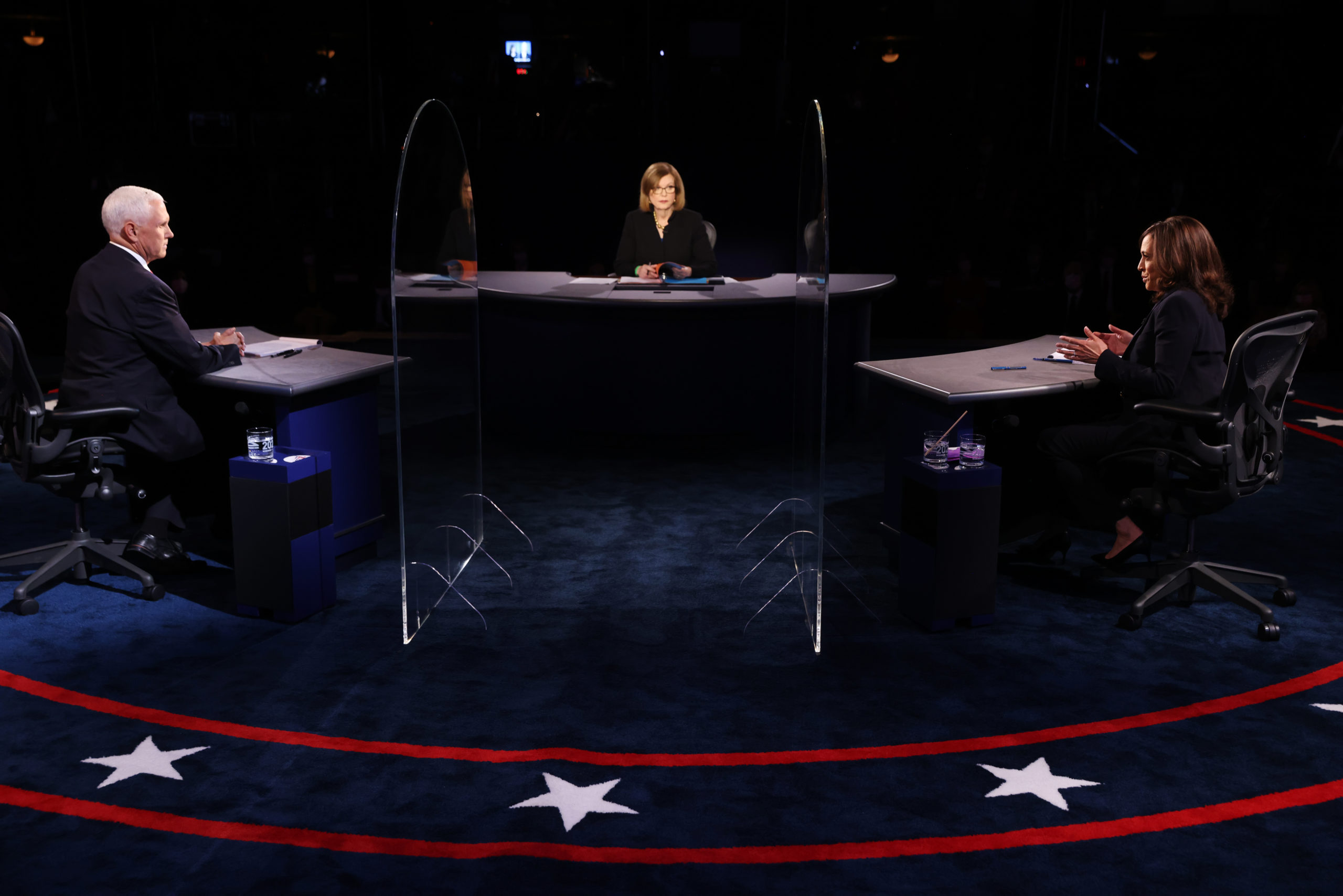 The candidates fielded questions across several different topics, all selected by Page and kept secret prior to the debate. Page further noted at the debate’s open that Americans expected a “lively” evening but urged both Harris and Pence to keep things “civil.” (RELATED: ‘Sh*t Show’ — Fox News’ Chris Wallace Completely Loses Control Of Trump, Biden In First Debate)

While Wednesday evening did not get as heated as the first debate did, both Harris and Pence consistently dodged questions and talked over their allotted time.

The night was so devoid of policy that a fly, which landed on Pence’s head and remained there for just over two minutes, caused considerable buzz on Twitter.

Highlights of our day:

I was just thinking that no one was going to win this debate. Turns out it’s the fly. #VPDebate

Whoever plays the fly on Pence’s head on SNL is going to win an Emmy.

As expected, the first question posed to Harris centered squarely on the pandemic. Page asked her to describe what the Biden administration would do differently than the Trump administration, and Harris tore into Pence and Trump for minimizing the threats posed by coronavirus during the spring.

“Can you imagine if you knew on January 28th, as opposed to March 13th, what they knew, what you might’ve done to prepare?” she stated. “They knew and they covered it up.”

Pence countered by touting Trump’s decision to close travel with China “before there were more than five cases in the United States.”

“Joe Biden opposed that decision,” he continued. “He said it was xenophobic and hysterical, but I can tell you, having led the coronavirus task force, that that decision alone by President Trump bought us invaluable time to stand up the greatest national mobilization since World War II, and I believe it saved hundreds of thousands of American lives.”

Pence then accused Biden and Harris of plagiarizing their pandemic plan — “something Joe Biden knows a little bit about.”

On the issue of a coronavirus vaccine, Harris said she trusted the opinion of medical experts in the administration and would be the “first in line” if Dr. Anthony Fauci vouches for its safety, but she also added that she does not trust Trump’s word.

Notably, when asked about Trump’s own coronavirus diagnosis and whether Pence had any conversations with the president about potentially transferring power, the vice president chose instead to accuse Harris of undermining public confidence in the coronavirus vaccine. He also claimed that Biden and former President Barack Obama mishandled the H1N1 outbreak and left the current administration unprepared to handle a pandemic. Harris also dodged when asked about potentially having transfer of power conversations with Biden.

Page next turned the conversation to economy, which most likely voters have consistently listed as the most important issue this election. Harris opened and promised that a Biden administration would repeal the Trump tax cuts on “day one,” finally push through an infrastructure revamp — a longtime project of Trump’s — and invest in the clean energy sector and public education.

“That’s how Joe Biden thinks about the economy,” she stated. “Which is about investing in the people of the country as opposed to passing a tax bill which has the benefit of letting American corporations go offshore to do their business.”

The issue quickly drew cross-talk and disagreement from both Pence and Harris on whether or not Biden’s economic plan would raise taxes on middle and lower class Americans.

Page’s first question on climate change was simple: does Pence believe the scientific community’s assessment “that man-made climate change has made wildfires bigger, hotter and more deadly, and have made hurricanes wetter, slower and more damaging?”

“The climate is changing,” Pence responded. “The issue is, what is the cause, and what do we do about it?”

He also claimed a potential Biden administration would reenter the Paris Climate Accord, impose the Green New Deal and ban fracking, but he stopped short of declaring the phenomenon of climate change an “existential threat.”

Harris countered by specifically denying that Democrats would ban fracking. She also cited an estimate from Moody’s that said Biden’s economic plan — which includes heavy investments in clean energy — would create 7 million more jobs than Trump’s.

Despite being given the opportunity to speak first on the United States’ relationship with China, Pence opted to spend roughly half of his speaking time attacking Harris’ voting record in the Senate.

“China is to blame for the coronavirus,” he finally stated. “President Trump is not happy about it. He’s made that very clear.”

Pence also cited the tragic death of Kayla Mueller — whose parents were invited guests of the Trump campaign — and the administration’s fight against ISIS.

The confirmation of Trump’s Supreme Court nominee Amy Coney Barrett shined a light on a number of new issues, including abortion and health care, but the conversation grew heated when Pence asked Harris whether or not she and Biden would support adding justices to the Supreme Court if they win the election.

Harris, as Pence pointed out, did not answer the yes or no question but did accuse the Trump administration of a different type of “court packing.”

“I sit on the Judiciary Committee,” she stated. “I have witnessed the lifetime appointments to the federal courts, the district courts, the courts of appeal, people who are purely ideological, people who have been reviewed by legal professional organizations and found to have been not competent or substandard.”

“Do you know that of the 50 people who President Trump appointed to the court of appeals for lifetime appointments, not one is black?” she continued. “This is what they’ve been doing. You want to talk about packing the court? Let’s have that discussion.”

While both candidates agreed that the killings of Breonna Taylor, George Floyd and other black Americans at the hands of police were tragic, they split significantly on future progress that could be made to ensure racial equality for all Americans.

Harris vowed that she and Biden would ban choke holds, create a national registry for police officers “who break the law,” outlaw private prisons and cash bail, decriminalize marijuana and expunge criminal records relating to marijuana-based arrests. She further accused Trump himself of failing to adequately disavow white supremacy, citing his comments following the Charlottesville protests and during the first 2020 debate.

Pence on the other hand, accused Harris and Democrats of stonewalling Republican efforts on police and criminal justice reform. He also claimed the media — and Harris herself — “selectively edit” the president’s comments on race.

“Senator Harris conveniently omitted, after the president made comments about people on either side of the debate over monuments, he condemned the KKK, Neo-Nazis, and white supremacists,” he stated. “And he has done so repeatedly.”

WHY CAN’T WE ALL GET ALONG?

Page, referencing Trump’s refusal to commit to an outright commit to a peaceful transfer of power if he loses in November, asked both Pence and Harris what they would each personally do to ensure the democratic process. Not surprisingly, both dodged the question.

Harris urged Americans to vote, while Pence expressed confidence in his and Trump’s reelection efforts.

Finally, the night closed with a question posed by an eighth grader about the current caustic state of American politics.

Pence responded by discussing the late Supreme Court Justices Ruth Bader Ginsburg and Antonin Scalia, who despite standing on total opposite ends of the political spectrum, were close friends.

“Here in America, we can disagree, we can debate vigorously, as Senator Harris and I have on this stage tonight,” he continued. “But when the debate is over, we come together as Americans.”

Harris in turn touched on Biden’s “long-standing reputation of working across the aisle.”