“@Scaramucci should I respond to Trump,” CSPAN’s Steve Scully tweeted around 10 pm Thursday night. It was not immediately clear what Scully was referring to.

Scaramucci retweeted Scully’s tweet with the caption: “Ignore. He is having a hard enough time. Some more bad stuff about to go down.” (RELATED: Second Debate Moderator Steve Scully Interned For Joe Biden) 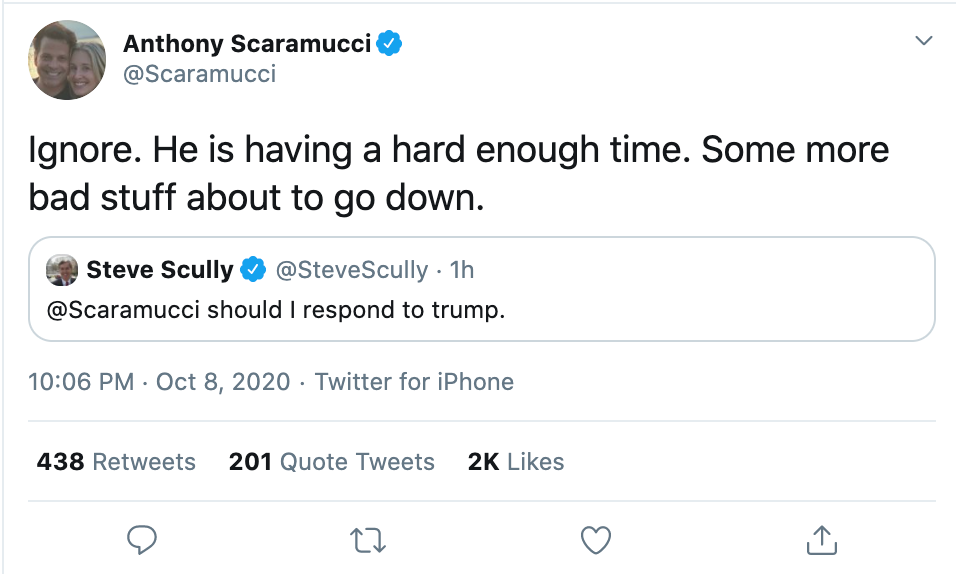 Neither Scaramucci nor Scully immediately responded to requests for comment from the Daily Caller News Foundation.

Some Twitter users suggested Scully was attempting to direct message Scaramucci about the upcoming presidential debate.

Susan Page, the moderator of the VP debate, hosted an off record party for Seema Verma

Steve Scully, the moderator of the next debate, is gossiping with Scaramucci on Twitter about Trump.

It’s time for a shakeup in debate commission leadershiphttps://t.co/HblUdKOi1q

Nothing to see here. Just the next debate moderator accidentally tweeting when he meant to send a DM, conspiring against Trump with turncoat Mooch. https://t.co/Dqln0DQir6