President Donald Trump was treated with a therapy made by Regeneron Pharmaceuticals after testing positive for coronavirus on Friday. While the treatment uses cells once derived from fetal tissue, the cells are no longer considered fetal stem cells, despite a number of claims to the contrary.

California Democratic Rep. Ted Lieu tweeted Oct. 6 that Trump had used an experimental drug that “relied on ‘human embryonic stem cells.'” While Lieu expressed support for it, he asked whether Trump — whose administration has worked to ban the use of fetal tissue in research — agrees with him.

The Department of Health and Human Services (HHS) announced June 5, 2019 that the government was curtailing the ability of government scientists working with the National Institutes of Health (NIH) to conduct studies that use donated fetal tissue. Some coronavirus vaccine developers say their work has been held up by the ban, Immunologist at the National Institutes of Health’s Rocky Mountain Laboratories in Montana Kim Hasenkrug told The Washington Post. (RELATED: White House To Block FDA Vaccine Guidelines That Would’ve Delayed Approval Past Election)

However, the Regeneron antibody with which Trump was treated was developed using a cell line that was originally — but not recently — derived from abortion tissue, according to a report from MIT Technology Review.

“It’s how you want to parse it,” Alexandra Bowie, a Regeneron spokesperson, told MIT Technology Review. “But the 293T cell lines available today are not considered fetal tissue, and we did not otherwise use fetal tissue.” 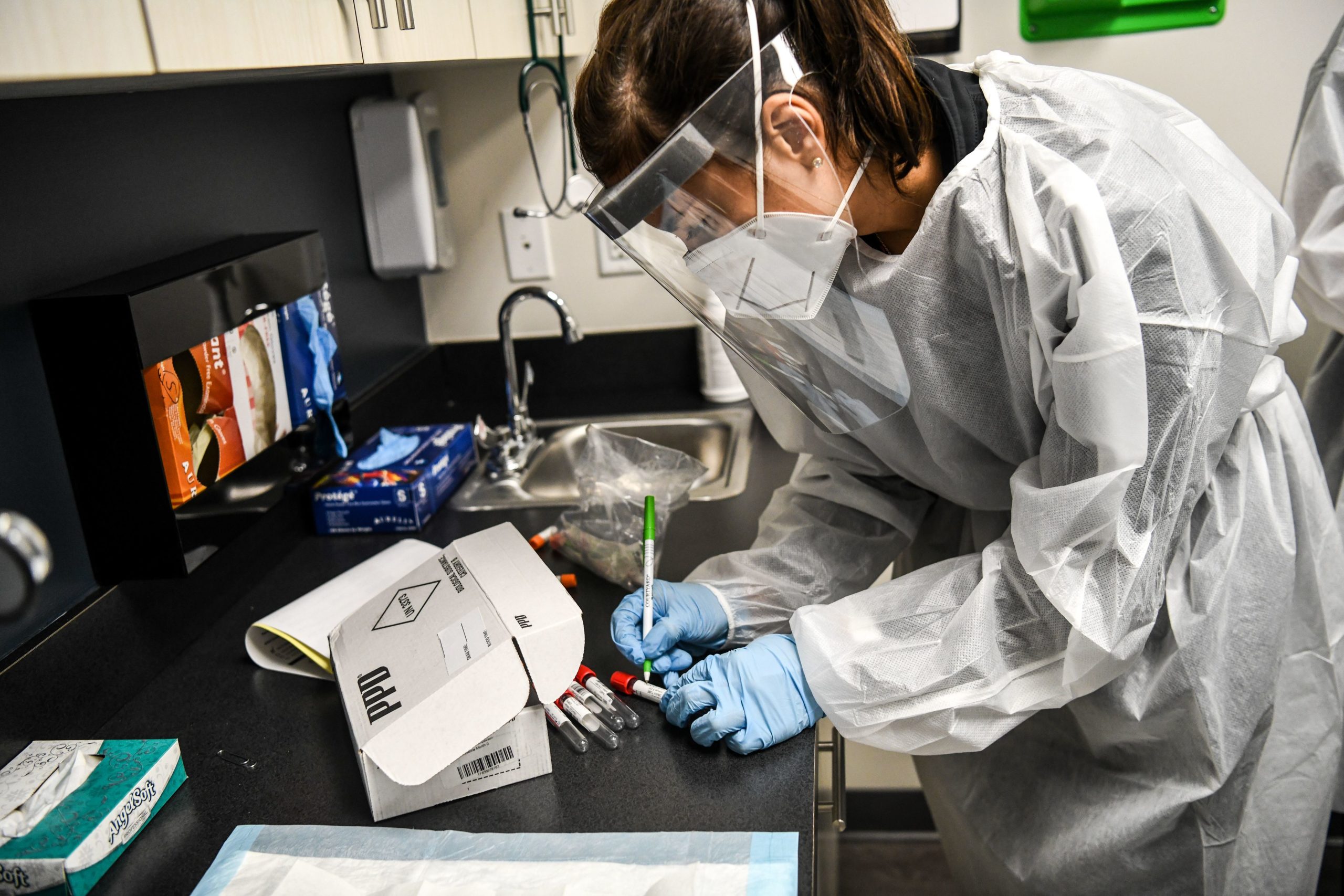 Nurse Practitioner Gabriela Huyke prepares for medical examination of a volunteer for the COVID-19 vaccine study at the Research Centers of America (RCA) in Hollywood, Florida, on August 13, 2020. – So-called phase three vaccine clinical trials, in which thousands of people take part in the final stages, are gaining traction in Florida. With more than half a million cases and over 9,000 deaths, Florida ranks second in the US in total cases behind California, making it an ideal place to carry out the trials. That has led to a flurry of activity at the RCA, a private center carrying out clinical trials in Hollywood, 25 miles (40kms) north of Miami. (Photo by CHANDAN KHANNA / AFP) (Photo by CHANDAN KHANNA/AFP via Getty Images)

The central dispute centers on the use of HEK 293T cells. Regeneron used laboratory tests that rely on a “standardized supply of [HEK 293T] cells” to assess whether the treatment was potent, per the report. Regeneron published supplementary material in June that said HEK 293T cells were “briefly” used to create COVID-19 like viral particle to test mouse and human-derived antibodies, according to USA Today.

The HEK 293T cells originated from kidney tissue taken from an aborted fetus in the Netherlands in the 1970s. The cells have since become “immortalized” after going through divisions and other modifications over the last 50 years, which means they are no longer considered fetal tissue, according to both USA Today and MIT Technology Review.

“This particular discovery program (REGN-COV2) did not involve human stem cells,” Bowie wrote, according to USA Today. “The 293T cell line was originally derived from human embryonic kidney cells but is an immortalized epithelial cell – so not a stem cell. These cells were transfected and used in production of a ‘pseudoparticle’ that mimics the virus’ Spike protein and allowed us to test neutralization ability of our antibodies against the virus.”

Labs need these cells to test how different antibodies will affect the virus, according to MIT Technology Review. Researchers at the University of Pittsburgh use HEK-293 cells to create the spike protein of the coronavirus as well.

“HEK-293 [cells] are essential for making protein subunit vaccines,” Andrea Gambotto, a vaccine scientist at the University of Pittsburgh School of Medicine said, according to Science Magazine. “Cultured [nonhuman] animal cells can produce the same proteins, but they would be decorated with different sugar molecules, which –in the case of vaccines – runs the risk of failing to evoke a robust and specific immune response.”

The use of what are known as HEK 293T cells isn’t uncommon. In fact, it’s used in numerous therapies and vaccines: 293T cells are used in vaccines for chickenpox, rubella, hepatitis A and shingles as well as being used to make drugs that treat rheumatoid arthritis, cystic fibrosis and hemophilia, according to Science Magazine.