Mail-in voting in Florida is expected to reach record highs due to the coronavirus pandemic, but mismatches between Florida election law and United States Postal Service (USPS) policies could increase the number of mail-in ballots that go uncounted in this hotly-contested sun-belt state.

Prior to the Aug. 18 primary races in Florida, voters submitted 2.1 million mail-in ballots, which far surpasses 2016 and 2018 primary mail-in ballot totals, according to News 4 Jax. Another 554,814 voted early in-person. An analysis performed for Politico by University of Florida political science professor Dan Smith found 60% of the votes cast in the Aug. 18 primary were sent by mail.

The analysis also showed that 35,500 mail-in ballots were rejected, either due to “missed deadlines or technical flaws,” in the August Florida primaries. Almost two-thirds of the rejected mail-in ballots were not counted because they arrived after Florida’s 7 p.m. Election Day deadline. Others were thrown out because there were signature mismatches or discrepancies in the voter identification process.

The 35,500 rejected mail-in ballots accounted for 1.5% of the total vote in Florida’s August primary.

In Florida, 550,338 vote by mail ballots have already been cast

In 2016, President Donald Trump edged out former Secretary of State Hillary Clinton by 1.2% to win the state of Florida.

It appears the state will be competitive again in 2020, with former Vice President Joe Biden currently leading the incumbent president by 3.7% on average, according to Real Clear Politics.

Florida isn’t effing around this year. About a quarter of all vote-by-mail ballots have been COUNTED already.

10/9/2020
• Over 28% of registered Democrats have returned their mail-in ballots.
• 250k of NPA voters have mailed their ballots so far. pic.twitter.com/4Nrlqjy1kr

Over five million registered voters had requested a mail-in ballot for the Nov. 3 general election as of Oct. 8, which is more than 1.5 times the amount in 2016, according to a report from The Palm Beach Post. That is about one in three of every registered voter in Florida.

If 1.5% of mail-in ballots are rejected like they were in the August primaries, that’s equivalent to 75,000 ballots in the general election, which is nearly three-fourths of Trump’s 2016 margin of victory in Florida.

The percentage of rejected mail-in ballots could be even higher this November because first-time absentee voters could fail to understand the directions while filling out and sending back their ballots, or could send the ballots back too late to be received and counted on Election Day, per the aforementioned Politico analysis. (RELATED: How 5 Swing States’ Mail-In Voting Laws Are Setting Up An Election Day Disaster)

These factors led Smith to conclude, “we could exceed 100,000 vote-by-mail ballots that don’t count” this November. 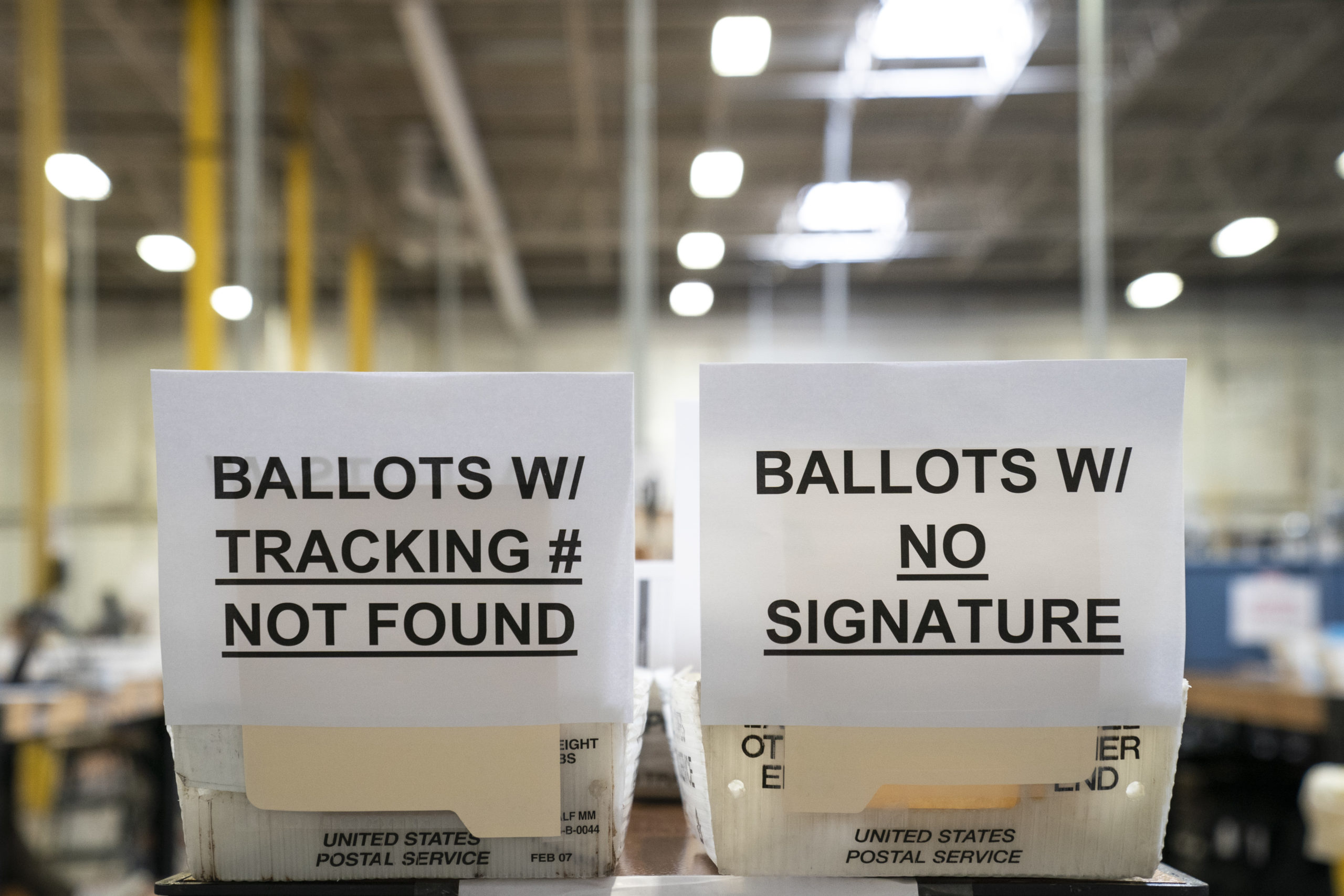 GLEN BURNIE, MD – OCTOBER 07: Signage for ballots with errors is seen in a warehouse at the Anne Arundel County Board of Elections headquarters on October 7, 2020 in Glen Burnie, Maryland. (Photo by Drew Angerer/Getty Images)

As new coronavirus cases have remained steady at around 2500 new cases per day over the month of October per The New York Times, the number of requested mail-in ballots could increase even more before the Oct. 24 deadline to request a mail-in ballot.

While the USPS has recommended implementing a mail-in ballot request deadline far enough in advance so that election officials can receive the request at least 15 days before the election, the Oct. 24 mail-in ballot request deadline is just 10 days before the election. (RELATED: Millions Of Votes Have Already Been Cast In Critical Battleground States)

Furthermore, Florida election law dictates that election officials can send mail-in ballots to voters as late as eight days before the election. In a July 29 letter to Florida Secretary of State Laurel Lee, Postal Service General Counsel Thomas Marshall highlighted these discrepancies. Marshall noted that First-Class mail and Marketing Mail, the two types of mail most commonly used by election officials to send and receive ballots, can take from two to five or three to ten days, respectively.

The letter also notes, “this mismatch creates a risk that ballots requested near the deadline under state law will not be returned by mail in time to be counted under your laws as we understand them.” Florida law requires mail-in ballots to be received by 7p.m. on Election Day in order to be counted, regardless of the postage stamp date.