After George Floyd died May 25, the country erupted with nationwide protests and riots, which have now been ongoing for nearly 5 months. Riots that left parts of cities destroyed sparked renewed interest in the loosely connected group of far-left activists known as Antifa.

Not much is known about the organizational structure of Antifa or the “black bloc” anarchists that make up the group. For the past 5 months, however, undercover reporters have been going to protests and riots across the country and have found out more about this group’s operations.

Antifa commonly dresses up as members of the press to evoke sympathy from the public. Daily Caller reporter Shelby Talcott described seeing members of the “media” participating in protests and riots. (RELATED: ‘I Am Antifa’: Pro-Antifa Candidate Surges Into Lead In Portland Mayor’s Race)

“Antifa has devised tactics that help them against police officers – and help them act like victims during a riot,” Talcott said. “One thing I’ve noticed is that many have begun to dress as members of the press, as media typically are exempt from curfews, unlawful assemblies and are supposed to be left somewhat alone by police (so long as they aren’t interfering).”
“This fake press is easy to identify if you take a step back during a riot and watch what they do,” she added. “While donned out in press gear, Antifa will harass police officers and even participate in counter-attacks during riots (we’ve seen some with shields, others throwing things, etc). As soon as officers move in, these Antifa members will cry ‘press.'”

This dude started rounding up all the “press” to go together down the street, where officers had retreated to. I’m not sure how many have legitimate press credentials… pic.twitter.com/08OdCuWGqA

“I have seen situations where fake press will attack the police by throwing objects at them during protests in Portland and cuss at them, this will usually draw out a response from officers during riots to arrest these individuals during an unlawful assembly,” said Daily Caller reporter Jorge Ventura. “These individuals will then claim they are members of the press while being arrested when they aren’t associated with any news media company, just simply writing press on themselves.”

“That’s why all the ‘press’ is there, the sympathetic press,” Smith told Reason. “They’re trying to create propaganda. They know how the police are going to react, so they carefully calibrate what they do to try to provoke the police into reacting and then filming it.”

“They want to try to push public opinion in favor of removing the police,” she added.

Antifa’s organizational structure is unlike the structure of a typical group, the reporters said. It’s intentionally ambiguous – but their tactics are designed to evoke a response from the public and the media.

Anarchists detail these tactics themselves in the anarchist publication Crimethinc, which explains coordinated efforts to create chaos. A New York Times article said that the strategy of the violent black bloc anarchists was to light fires, break windows, and otherwise create mayhem before retreating back into the crowd. Once police react, they portray themselves as victims, generating increased public support for their cause.
“Antifa also has tactics to draw police officers out,” Talcott told the Daily Caller. “They’ll bang on fences erected in front of buildings, light fires, toss various objects at both police and buildings, etc.”
“They do this consistently, ramping up the violence until officers arrive,” she said. “Once the police arrive, Antifa will often act like they did nothing wrong – nothing to prompt officers to fire crowd control munitions at them.”

Smith described similar tactics when she went undercover to a Portland riot where the Portland Police Association was burned.

“Basically they’re baiting the police into overreacting,” she told Reason.

“Antifa goes for a certain type of violence, a mid-level violence,” Smith continued. “Most people aren’t practiced in violence, and what they’ll do is, they’ll either back down or they’ll overreact. Antifa basically as a group does the equivalent of just pushing someone on the shoulder, and again, and again.” 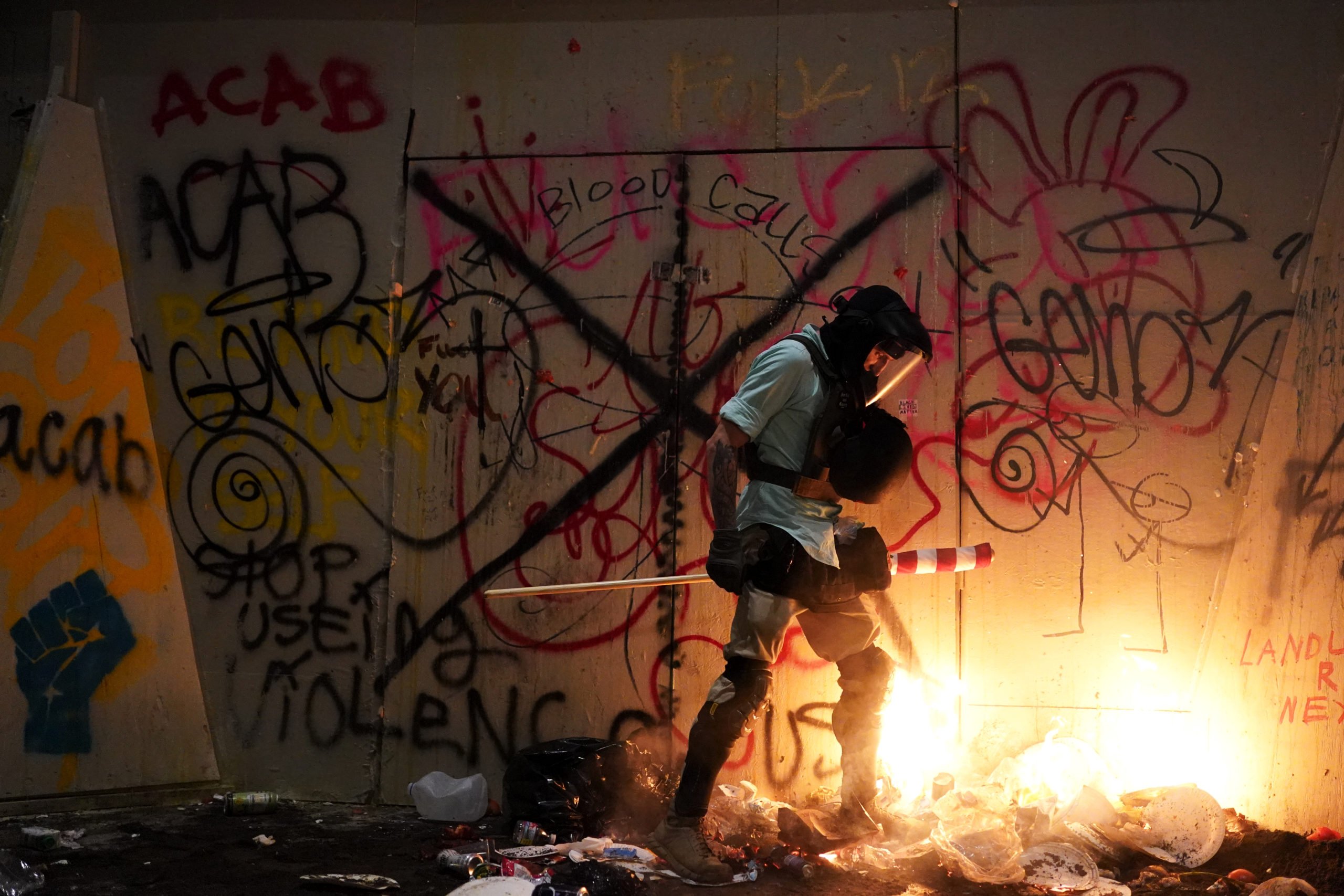 A protester attempts to stomp out a small fire during a protest at the Mark O. Hatfield U.S. Courthouse on July 21, 2020 in Portland, Oregon. Tuesday night marked 55 days of protests in Portland following the death of George Floyd in police custody. (Photo by Nathan Howard/Getty Images)

Daily Caller Video Director Richie McGinniss described how Antifa purposefully tries to appear leaderless, but in reality, leaders work behind the scenes to coordinate protest activity and security. McGinniss said that while he, Talcott, and Ventura were in the Capitol Hill Autonomous Zone (CHAZ), they witnessed this organization first-hand.

“We know this because we witnessed one of Antifa’s leaders, Nikki Jameson, guarding checkpoints and hopping on the radio when he saw something suspicious,” he said. “In another instance, the guards noticed that we were leaving the zone and identified we were press, then had us followed even after we were blocks outside of the zone.” (RELATED: REPORT: Trump To Announce $500 Billion ‘Black America Plan,’ Designate KKK And Antifa As Terrorist Organizations)
Smith described Antifa’s organizational structure as an “open-source network insurgency.”
“People keep looking for a chain of command, and you don’t necessarily need that, as long as everyone understands a basic level of instruction it works,” she told Reason.
The secrecy within the group makes it nearly impossible for an undercover reporter to know everything. While the violence is meant to draw media attention, the inner workings of the group are intended to do the opposite.