A newly declassified FBI document shows what steps the bureau took to try to verify the infamous Steele dossier, which accused the Trump campaign of conspiring with Russia.

The document, a 94-page spreadsheet, shows that investigators relied heavily on open source information, including from news articles, as evidence to support some of the allegations in the dossier, which former British spy Christopher Steele compiled on behalf of the DNC and Clinton campaign.

The spreadsheet, which was first published by CBS News reporter Catherine Herridge, also cites information from other government agencies regarding some of Steele’s claims.

Reports from the special counsel’s office and Justice Department inspector general ultimately debunked Steele’s most explosive allegation: that the Trump campaign was engaged in a “well-developed conspiracy of cooperation” with the Russian government.

Steele, a former MI6 officer, also alleged that the Russian government was blackmailing Donald Trump with video of him with prostitutes in Moscow in 2013. Trump has vehemently denied that allegation, and people who were with him on the trip central to the dossier have denied that the incident occurred. (RELATED: FBI Investigated Steele Dossier As A Possible Russian Spy)

The FBI relied heavily on Steele’s information as part of its investigation of the Trump campaign’s possible ties to Russia, which was dubbed Crossfire Hurricane. The bureau cited information from Steele in applications to obtain Foreign Intelligence Surveillance Act (FISA) warrants against Carter Page.

The Justice Department’s inspector general excoriated the FBI for withholding information from the FISA court that undercut the dossier, including details from an interview that Steele’s primary source gave the FBI in January 2017. 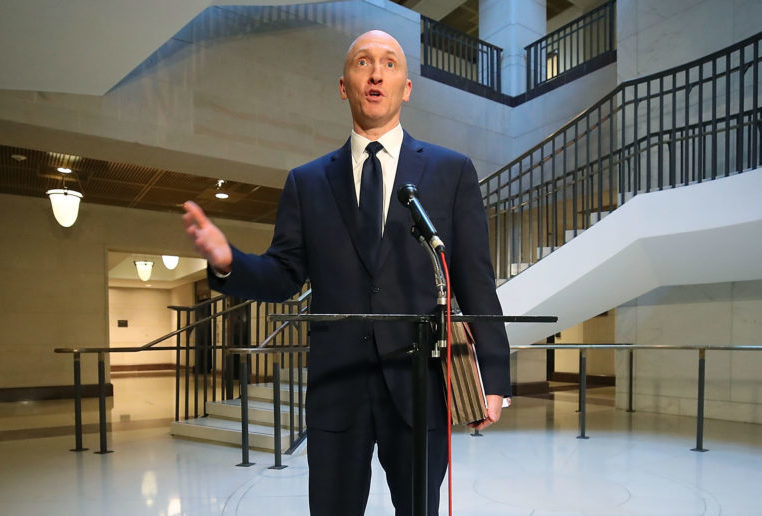 Carter Page, former foreign policy adviser for the Trump campaign, speaks to the media after testifying before the House Intelligence Committee on November 2, 2017 in Washington, D.C. (Photo by Mark Wilson/Getty Images)

The source, Igor Danchenko, told the FBI in January 2017 that he provided Steele with rumors and gossip that he picked up from six sub-sources, most of whom were Russian. Danchenko, a Russia analyst who lives in Washington, D.C., told the FBI that he did not verify the information he gave to Steele, who operates an intelligence firm in London.

The spreadsheet also cites unverified allegations from a memo compiled by Cody Shearer, a longtime associate of the Clintons. Shearer also claimed that Russian intelligence services had a Trump sex tape.

Steele obtained the memo from a then-State Department official, Jonathan Winer, and provided it to his FBI contacts on Oct. 19, 2016. The spreadsheet shows for the first time that the FBI looked into allegations from the so-called Shearer dossier.

The spreadsheet repeatedly cites an article published on Sept. 23, 2016 regarding Carter Page’s alleged meeting in July 2016 with two Kremlin insiders.

Steele and the author of that article, Michael Isikoff, have since acknowledged that Steele was the primary source for that story.

The FBI did not disclose that Steele was Isikoff’s source in either the spreadsheet or the surveillance applications against Carter Page.

Other previously undisclosed aspects of the Russia probe are revealed in the spreadsheet.

It says that on Jan. 14, 2017, an FBI confidential human source reported to the FBI that an unidentified person “who was willing to defect to the U.S.” had “claimed to have compromising tapes on President Donald Trump.”

The spreadsheet also reveals that the FBI opened a tax evasion and money laundering investigation against Paul Manafort on Jan. 13, 2016, months before he joined the Trump campaign.