The rapid spread of the novel coronavirus in the spring led several social media and tech companies to place restrictions on virus-related content that could potentially harm users. Some companies established the World Health Organization (WHO), a United Nations agency, as the arbiter of shareable content. 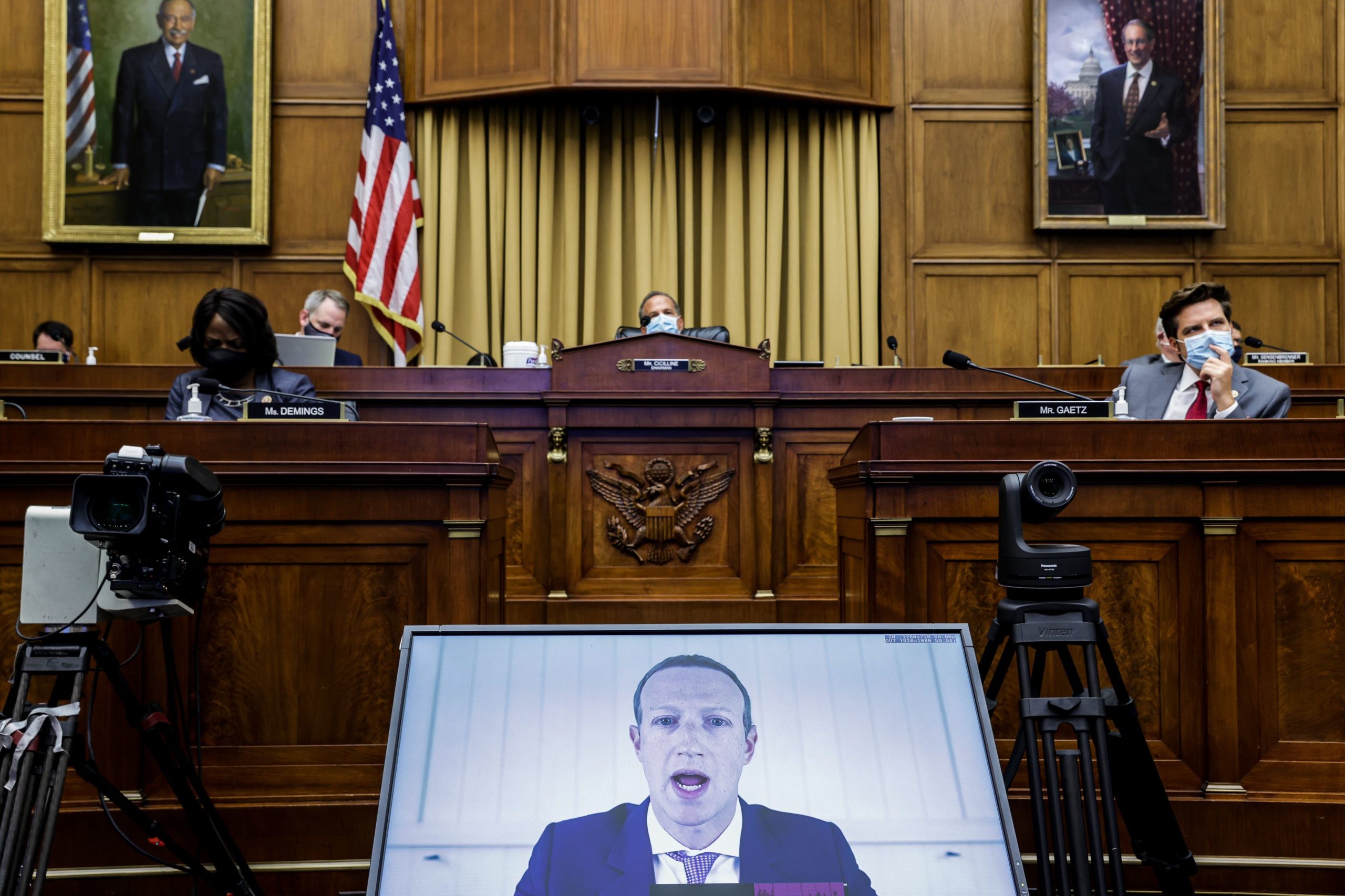 Facebook said it would begin removing posts with false coronavirus claims “that have been flagged by leading global health organizations” in a statement on Jan. 30.

Epidemiologists estimate that coronavirus first spread from animal to human in either October or November 2019 in Wuhan, China, The Wall Street Journal reported. On Jan. 9, Chinese officials announced a coronavirus outbreak.

The WHO declared the outbreak of coronavirus a pandemic on March 11. (RELATED: Trump Tells WHO: Reform In 30 Days Or Forfeit US Funding)

President Donald Trump announced that the U.S. would cut funding to the WHO over its handling of the coronavirus outbreak on April 14. The WHO has been accused of having a pro-China bias, which affected its coronavirus decision-making, according to Foreign Policy Magazine.

“Our policies specifically prohibit COVID-19 medical misinformation that contradicts guidance from medical authorities (such as local health institutions, the Centers for Disease Control and the WHO) on the treatment, prevention, diagnosis or transmission of the virus,” a YouTube spokesperson told the Daily Caller News Foundation in a statement.

“We enforce these policies based on evolving guidance from both the WHO and the CDC,” the spokesperson continued. 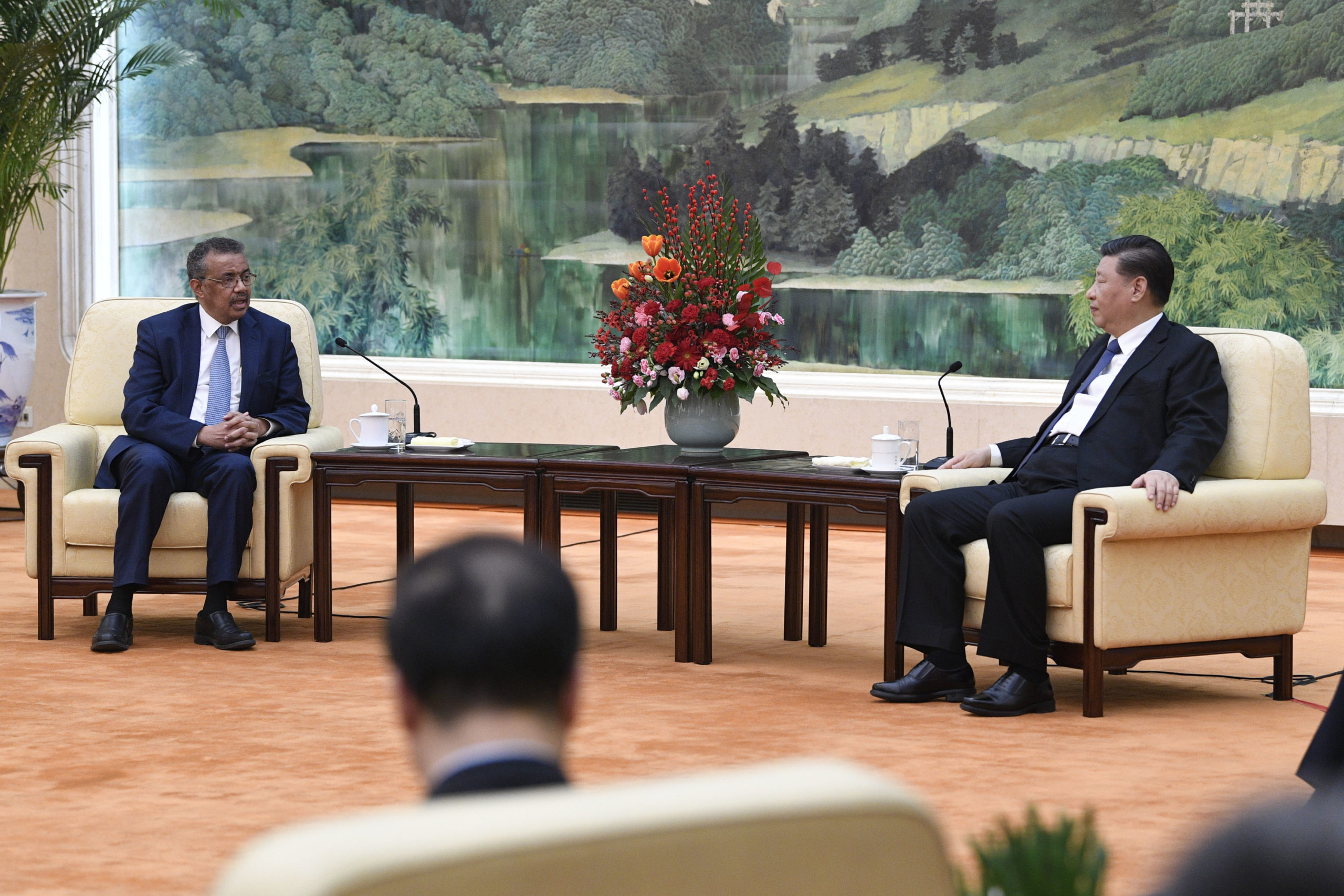 But the WHO has repeatedly shared information only to later reverse its position.

Top WHO officials repeatedly said in the early days of the outbreak that coronavirus travel bans were unnecessary.

“WHO does not recommend any specific measures for travelers,” the WHO said in a Jan. 5 statement. In case of symptoms suggestive of respiratory illness either during or after travel, travelers are encouraged to seek medical attention and share travel history with their healthcare provider.”

On Jan. 30, despite having reported cases in multiple countries days before, the WHO’s coronavirus emergency committee said, “The Committee does not recommend any travel or trade restriction based on the current information available.” 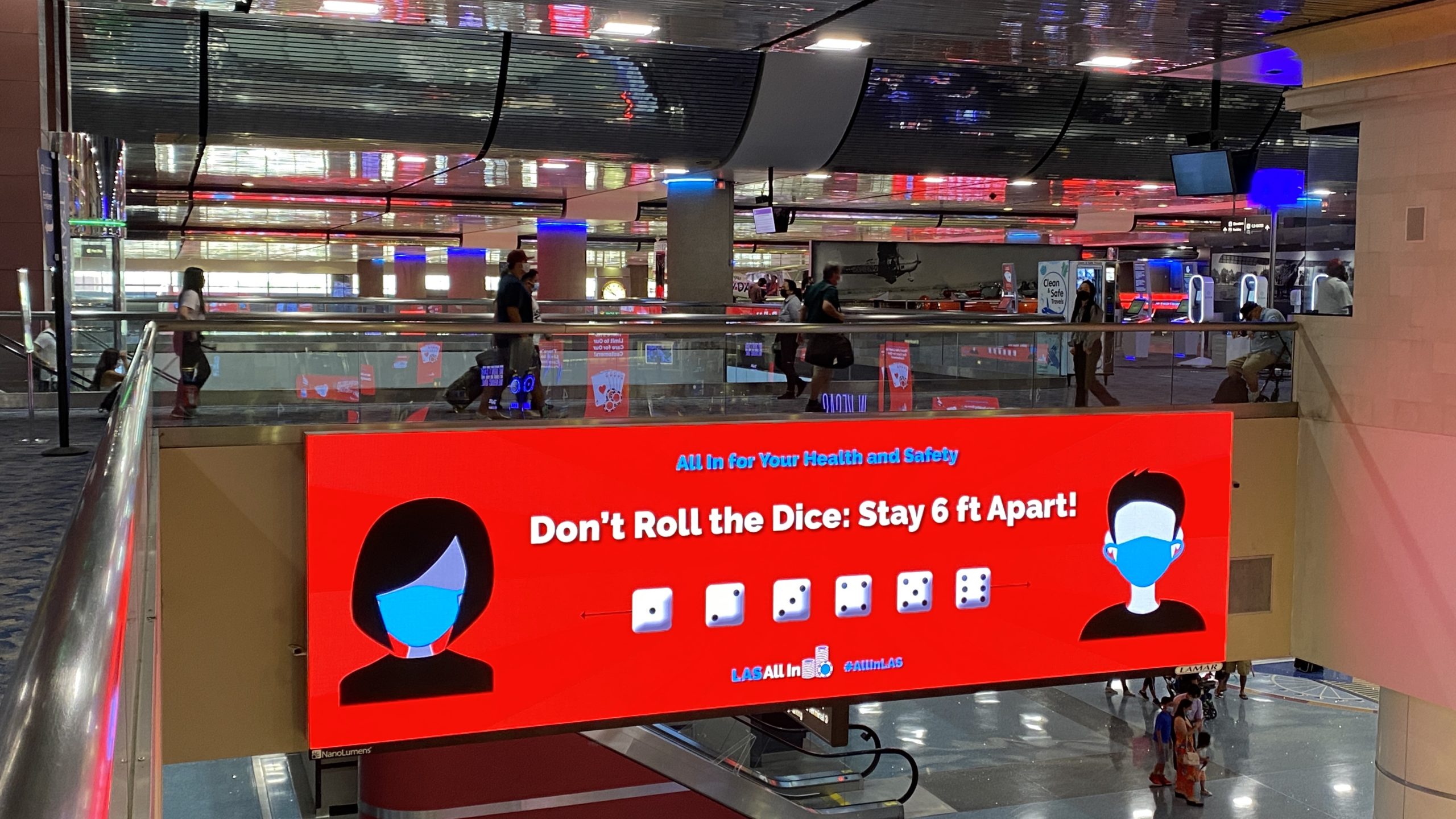 On Jan. 31, Trump signed an order suspending entry into the U.S. of people who were in China. (RELATED: China Didn’t Alert WHO To Coronavirus Outbreak — The Internet Did, New Timeline Shows)

On Feb. 3, the WHO doubled down: “No need for measures that ‘unnecessarily interfere with international travel and trade’ in trying to halt the spread of a coronavirus.”

On Feb. 11, the WHO reversed its guidance.

“Evidence on travel measures that significantly interfere with international traffic for more than 24 hours shows that such measures may have a public health rationale at the beginning of the containment phase of an outbreak,” the new guidance said.

There wasn’t a scientific basis to the WHO’s guidance against travel restrictions, according to a Sept. 30 New York Times report. Rather, the guidance was based on international public health policy formed in the 1990s, which was more political than it was scientific.

Following its investigations into the coronavirus outbreak in China, the WHO said on Jan. 14 that there “no clear evidence of human-to-human transmission.”

On Jan. 24, the WHO’s official coronavirus report confirmed cases in six countries outside of China including South Korea, Japan and Taiwan.

One week later, on Jan. 30, the WHO said that there “has been human-to-human transmission in 3 countries outside China.”

Between January and May, when the rate of coronavirus deaths per day rapidly climbed, the WHO said masks were unnecessary for the general public. The WHO’s official guidance said medical masks should be “reserved for health care workers.”

“The use of medical masks in the community may create a false sense of security, with neglect of other essential measures, such as hand hygiene practices and physical distancing, and may lead to touching the face under the masks and under the eyes, result in unnecessary costs, and take masks away from those in health care who need them most, especially when masks are in short supply,” the WHO’s April 6 guidance said.

On June 5, the WHO released guidance that recommended mask wearing to the general public.

“WHO advises that governments should encourage the general public to wear masks where there is widespread transmission and physical distancing is difficult, such as on public transport, in shops or in other confined or crowded environments,” WHO Director-General Tedros Adhanom said at a June 5 news conference.

WHO updated guidance on the use of masks for control of #COVID19: https://t.co/z6DTZLG5Qs

The new guidance is based on evolving evidence and provides updates on:

????when a mask should be worn

????what a mask should be made of pic.twitter.com/Cu7MEyCs3J

“From the data we have, it still seems to be rare that an asymptomatic person actually transmits onward to a secondary individual,” Van Kerkhove said at a WHO news conference, according to CNBC. “It’s very rare.”

Individuals who test positive for coronavirus, but show no signs of having it are considered asymptomatic. The fear of asymptomatic individuals spreading coronavirus was part of what led U.S. and local officials to enact shutdowns in the spring, according to CNBC.

On June 10, Van Kerhove backtracked at another news conference, according to CNBC.

“I was just trying to articulate what we know,” she said, CNBC reported. “And in that, I used the phrase ‘very rare,’ and I think that that’s misunderstanding to state that asymptomatic transmission globally is very rare. I was referring to a small subset of studies.” 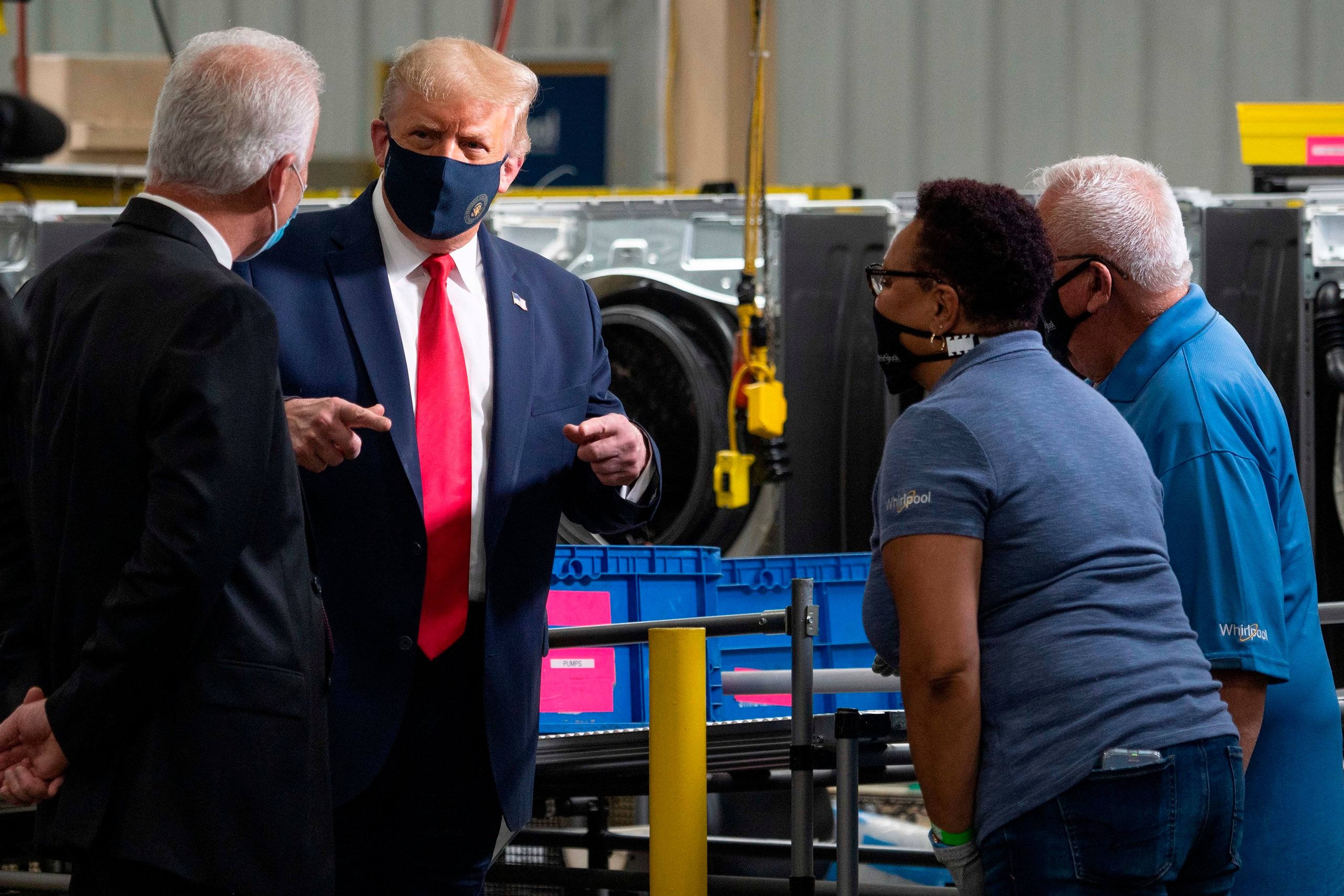 US President Donald Trump wears a face mask as he speaks to employees while touring a factory in Clyde, Ohio, on Aug. 6. (Jim Watson/AFP via Getty Images)

On March 29, the WHO stated that airborne transmission was only possible in settings when health care workers were caring for patients with the virus. There was no reference to airborne spread among those not in health care settings in the WHO’s March guidance.

On July 9, the WHO reversed course and stated that spread might occur in poorly ventilated indoor settings.

“Short-range aerosol transmission, particularly in specific indoor locations, such as crowded and inadequately ventilated spaces over a prolonged period of time with infected persons cannot be ruled out,” the updated WHO guidance said.

The WHO favored lockdowns throughout most of the pandemic. Although the definition of a lockdown varied globally, the term generally refers to a government-enforced measure requiring the general public in non-essential industries to quarantine at home, according to The New York Times.

On April 15, the WHO released six conditions that governments should meet before ending their country’s lockdown policy, NPR reported. The conditions include minimizing hot spot risks and the establishment of preventative measures in public places.

“We’ve spoken previously about the factors countries must consider as they plan to start lifting so-called #COVID19 lockdown restrictions”-@DrTedros pic.twitter.com/i1iHcQo0oE

On July 1, the WHO warned that some countries may need to reinstate their lockdowns to prevent the virus from spreading, according to CNBC. It repeated that warning on July 10, CBS News reported.

On Friday, however, WHO Special Envoy on COVID-19 Dr. David Nabarro said lockdowns should not be the “primary control method” for governments around the world, according to The Spectator.

The WHO delayed declaring the coronavirus outbreak a public health emergency of international concern (PHEIC) for weeks in January. A PHEIC is declared when the WHO determines that multiple countries are at risk of infection and require an internationally coordinated response.

On Jan. 23, the WHO, which activated its Incident Management Support Team on Jan. 1, declined to declare a PHEIC after sending an investigative team to China to analyze the outbreak. 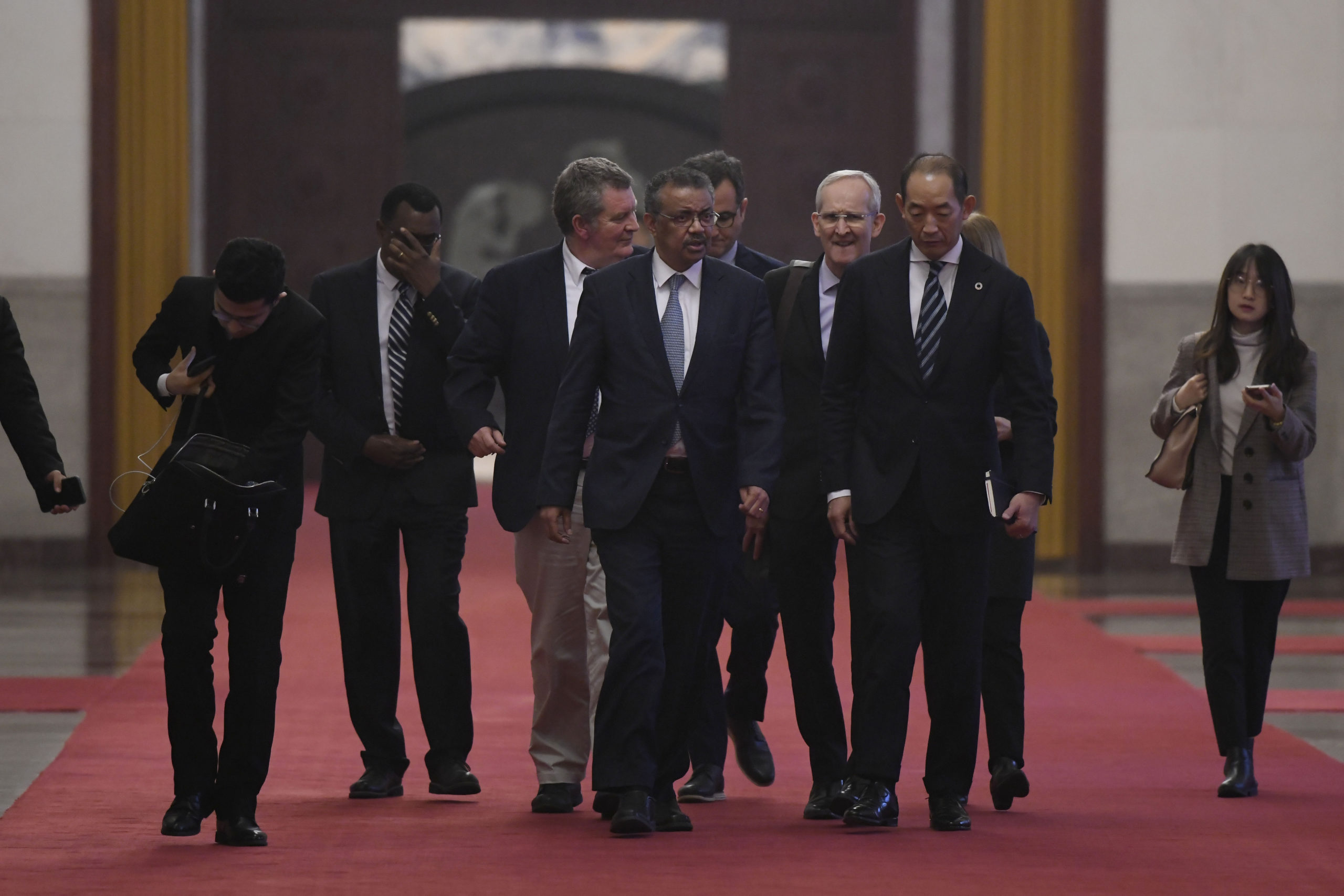 “It’s a bit too early to consider that this event is a Public Health Emergency of International Concern,” WHO expert Didier Houssin told reporters at a news conference. (RELATED: Confirmed: China Pressured WHO Against Declaring Coronavirus Global Health Emergency)

By Jan. 23, the virus had spread to at least five other countries, according to The New York Times.

“It is important to note that as the situation continues to evolve, so will the strategic goals and measures to prevent and reduce spread of the infection,” the WHO said in a statement. “The Committee agreed that the outbreak now meets the criteria for a Public Health Emergency of International Concern.”