The full impact of coronavirus pandemic lockdowns may take years to understand, but the negative effects have already taken a toll on many aspects of Americans’ lives.

The abrupt change in routine for millions upended the lives of people of all ages and backgrounds. World Health Organization (WHO) special COVID-19 envoy David Nabarro also recently said the WHO does not advocate lockdowns as the “primary means of control of this virus,” and that lockdowns are only justified as a tool to “buy you time to reorganize, regroup, rebalance your resources.”

Months after the popularized motto “flatten the curve” encouraged people to make the temporary sacrifice of remaining at home and only going to the store when absolutely necessary, millions continue feeling the effects of the lockdowns.

Sequential surveys studied by the University of Texas’s Olivier Coibion, University of California at Berkeley’s Yuriy Gorodnichenko, and Chicago Booth’s Michael Weber showed the impact of lockdowns in the initial months of the pandemic. 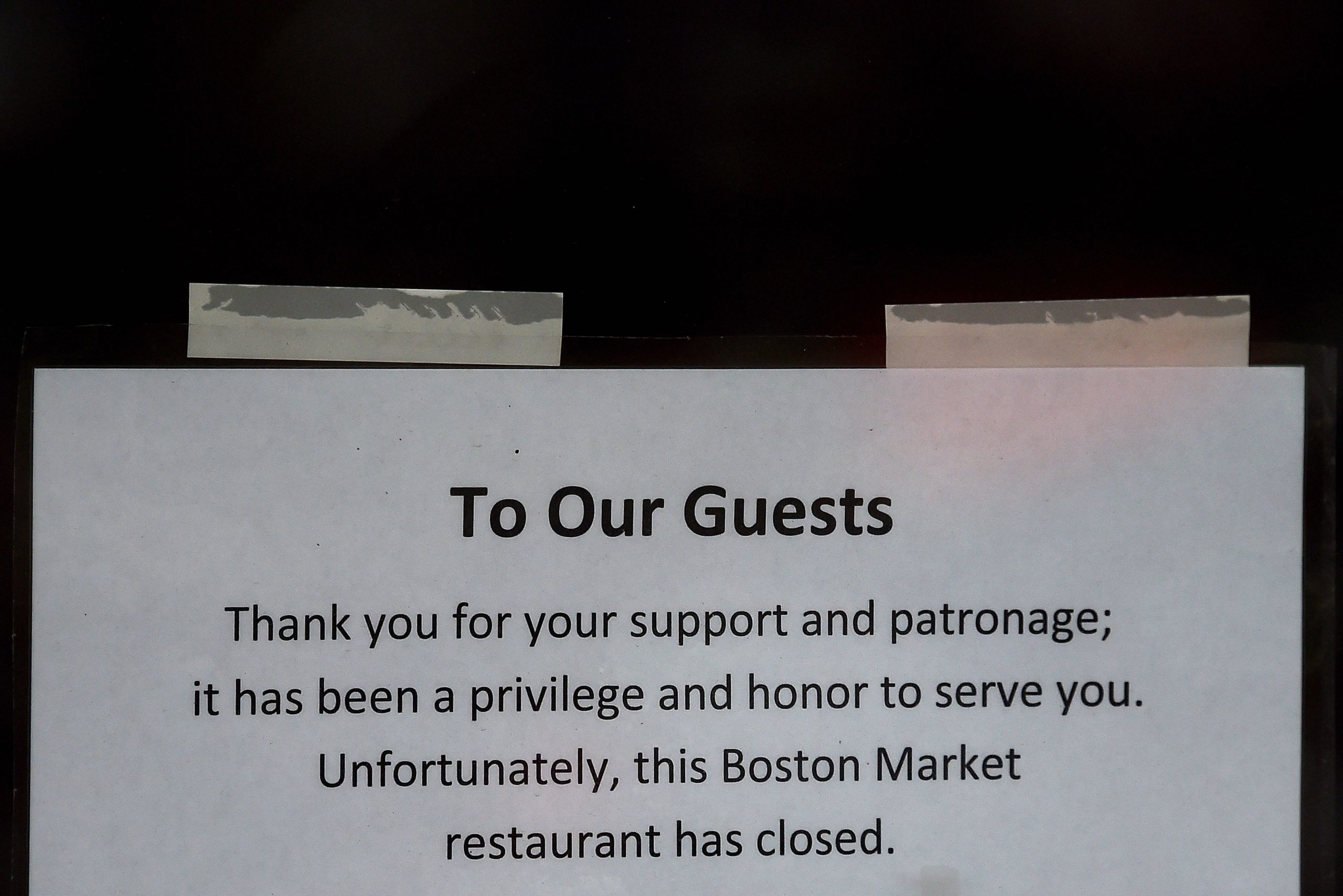 A Boston Market restaurant displays a “Thank you” sign for their guests in its window after closing down permanently as more businesses feel the effects of stay-at-home orders amid the coronavirus pandemic on May 18, 2020 in Arlington, Virginia. (Photo by OLIVIER DOULIERY/AFP via Getty Images)

They find that employment rates fell by 5 percentage points between the two surveys, or more than the drop during and after the Great Recession, according to the Chicago Booth Review.

In addition, 44 percent of the population experienced a decline in earnings and 54 percent experienced a decrease in savings. This had a domino effect on spending as average monthly consumption plunged from $4,000 before the crisis to $3,000 by April.

People who lived in counties with shelter-in-place orders were almost 3% less likely to be employed than those elsewhere. The survey participants under lockdown orders also had a dark view of the future, expecting unemployment to remain high over the following five years.

A Pew Research Center survey released in September found that one-in-four Americans had trouble paying their bills since the pandemic started, a third dipped into savings or retirement accounts to make ends meet. Nearly one-in-six reported borrowing money from friends or family or gotten food from a food bank. Overall, 25% of U.S. adults also reported saying they or someone in their household lost their job because of the pandemic.

Thousands of businesses also closed across the U.S., many unable to stay afloat after being deemed non-essential during lockdowns. 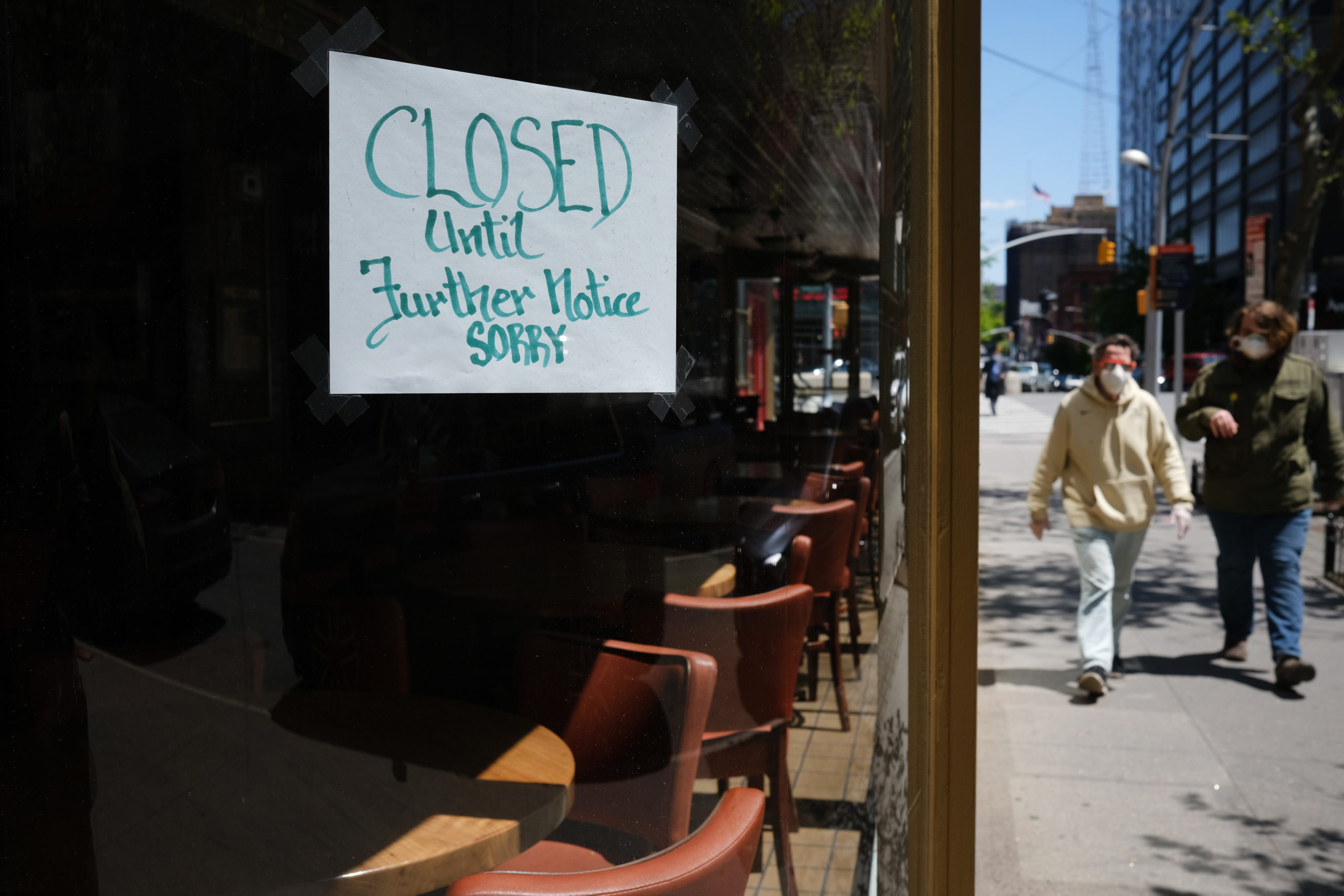 NEW YORK CITY- MAY 12: People walk through a shuttered business district in Brooklyn on May 12, 2020 in New York City. Across America, people are reeling from the loss of jobs and incomes as unemployment soars to historical levels following the COVID-19 outbreak. (Photo by Spencer Platt/Getty Images)

Yelp’s Economic Impact Report in September revealed that 60% of businesses that closed won’t be reopening, according to CNBC. As of Aug, 31, 163,735 businesses indicated on Yelp that they have closed, a decrease from the 180,000 that closed at the very beginning of the pandemic. However, it actually shows a 23% increase in the number of closures since mid-July.

“Overall, Yelp’s data shows that business closures have continued to rise with a 34% increase in permanent closures since our last report in mid-July,” Justin Norman, vice president of data science at Yelp, told CNBC.

Stay-at-home orders and other physical distancing measures were economically and socially disruptive, and contributed to adverse psychological health issues.

A study published in September found that nearly a quarter of people in the United States are experiencing symptoms of depression, which is about three times the number before the pandemic. Another study showed that social isolation and loneliness among U.S. adults in the earliest months of the pandemic was also elevated.

In April 2020, 13.6% of US adults reported symptoms of serious psychological distress, relative to 3.9% in 2018, the study found. A Centers for Disease Control (CDC) study released in August found that a startling 25% percent of young adults, aged 18-24, say they’ve thought of committing suicide in the last month due to coronavirus conditions.

Doctors at California’s John Muir Medical Center said in May that deaths by suicide were outstripping those by the coronavirus, noting that they had seen a “year’s worth of suicide attempts in the last four weeks.”

The circumstances created by lockdowns also have coincided with a rise in drug-related deaths. The pandemic has contributed to rising drug-related deaths and the ever-worsening opioid crisis in the United States, according to health experts and data collected by the Wall Street Journal. Individuals battling opioid addiction have experienced increased stress due to isolation during the pandemic.

Roughly 13% of American adults surveyed in June said they had started or increased drug use, according to a U.S. Centers for Disease Control and Prevention study. (RELATED: Data Show Pandemic Contributing To Opioid Crisis, Local Health Experts Report ‘More Relapses’)

“I don’t think it would have been this high a number if Covid-19 hadn’t hit us,” Ohio’s Franklin County coroner Anahi Ortiz said referring to the increasing drug-related fatalities, reported by the WSJ. 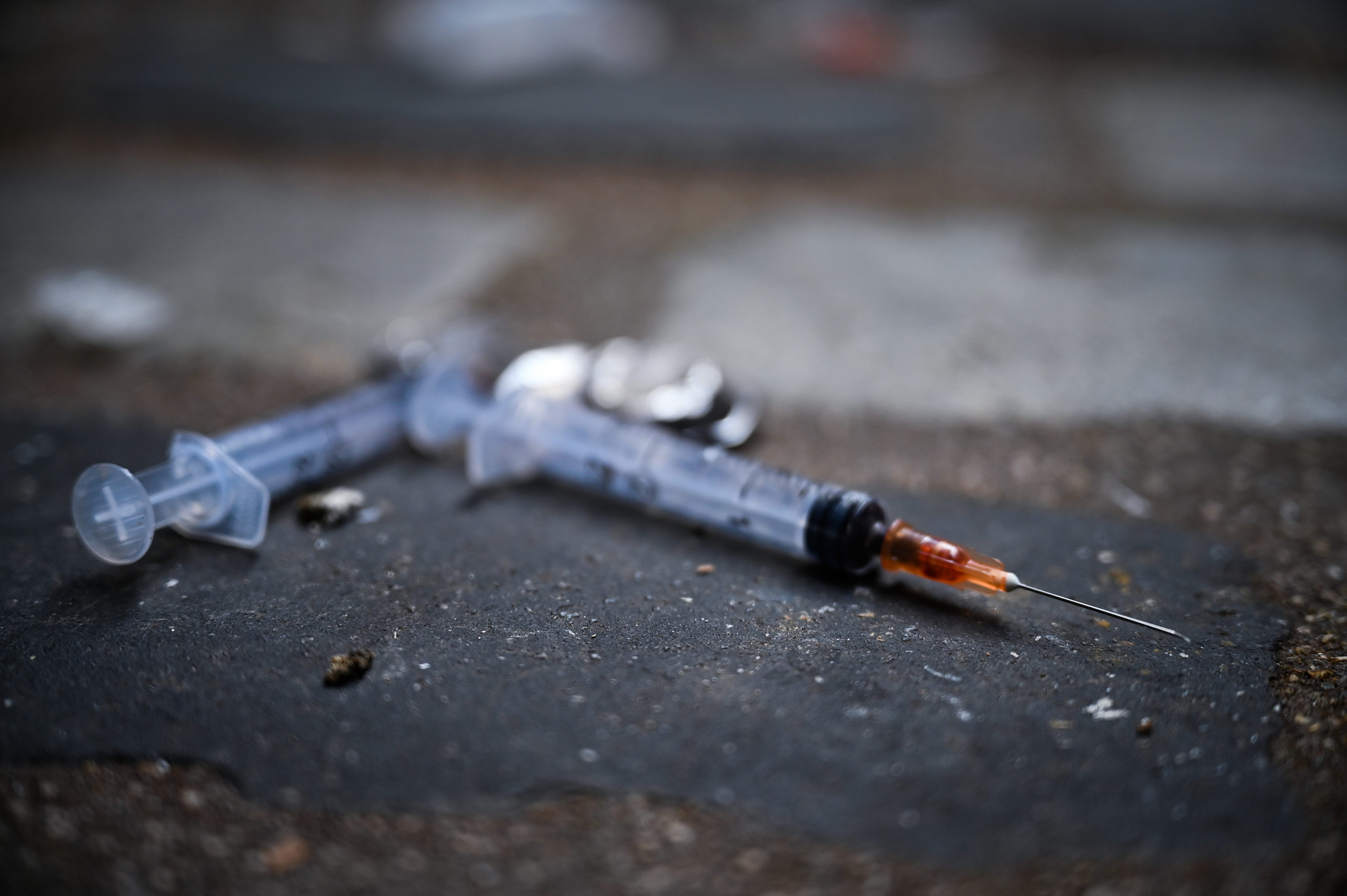 GLASGOW, SCOTLAND – SEPTEMBER 25: Needles are seen littering the pavement in a lane near to a Safe Consumption van set up by Peter Krykant on September 25, 2020 in Glasgow, Scotland. (Photo by Jeff J Mitchell/Getty Images)

Overall, suspected overdoses rose about 18% after states began mandating lockdowns in March compared to pre-pandemic levels, according to data from the Overdose Detection Mapping Application Program, The WSJ reported.

In San Francisco, four times more people have died due to drug overdoses than from coronavirus in 2020, the San Francisco Chronicle reported.

SF has had four times as many deaths due to drug overdoses than COVID in 2020. https://t.co/AN0WbUUsM7