President Donald Trump has altered the political landscape in ways that will persist regardless of the outcome in November’s presidential election. One policy area where Trump’s influence has often gone unnoticed is on the U.S. space strategy, and the advancements made during the Trump administration will likely persist in Washington long after his presidency.

Outer space is seldom discussed in popular political discourse because it is easily overshadowed by more immediate issues like the economy or healthcare. The coronavirus pandemic and Supreme Court appointments have especially captured the attention of American voters in 2020, according to Pew Research Center polling. 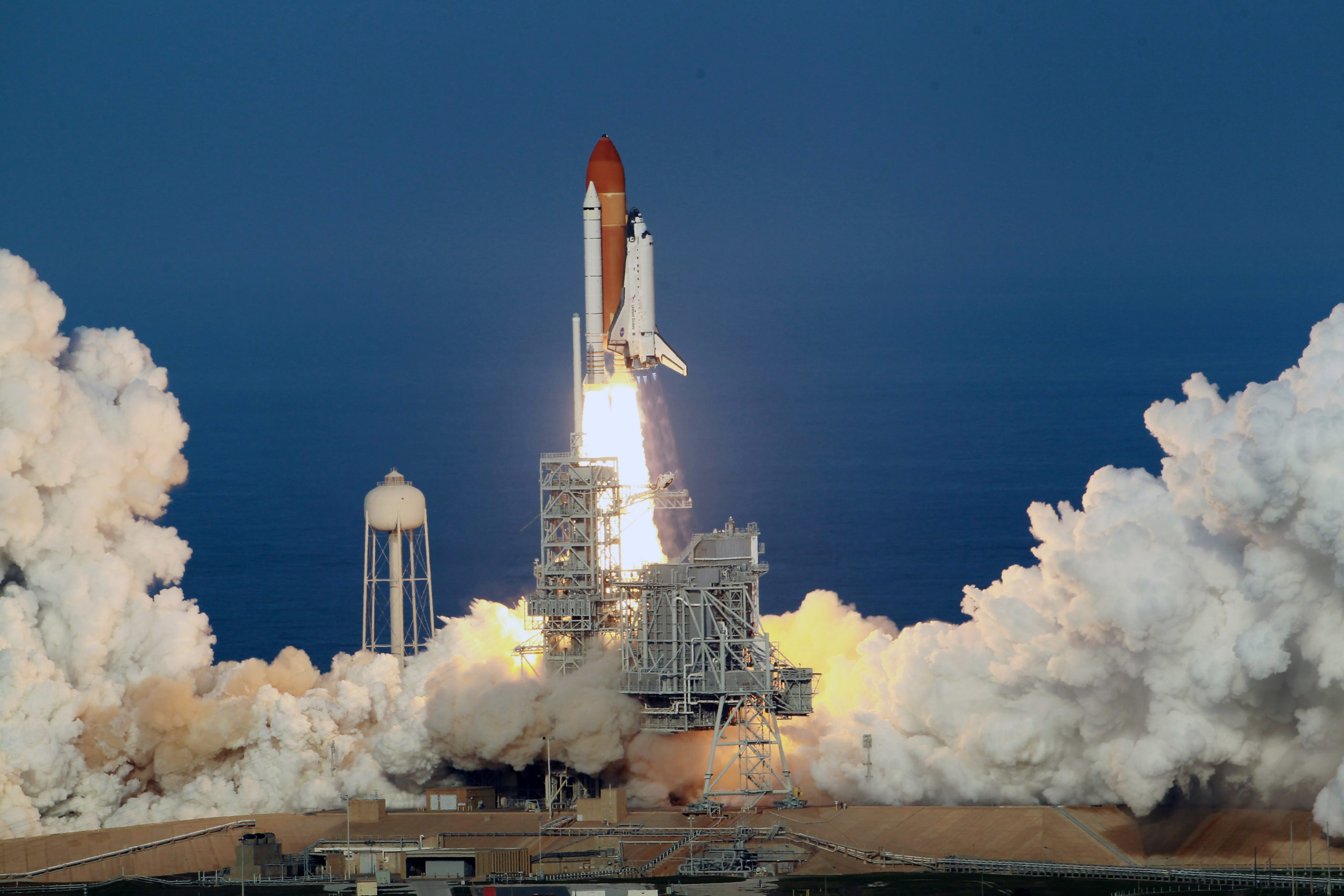 Space Shuttle Discovery lifts off from launch pad 39A at the Kennedy Space Center on Feb. 24, 2011 in Cape Canaveral, Florida (Joe Raedle/Getty Images)

Space policy no longer appears to capture the public’s imagination as it did during the Cold War. Following the 1986 Space Shuttle Challenger disaster, the Rogers Commission Report delivered to former President Ronald Reagan cast doubt on the future of the national space program.

The space program made some advancements after the Cold War but it arguably began to fade away from public consciousness. Former President Bill Clinton oversaw the beginnings of the International Space Station in 1993 and former President George W. Bush formed a commission in 2004 that led to programs such as the Orion spacecraft and Ares rockets.

Former President Barack Obama announced a 2010 budget for the National Aeronautics and Space Administration (NASA) that scrapped the Bush-era programs, according to Scientific American. The frequent changes to NASA’s priorities led to a loss of about $20 billion and delayed plans to send men to the moon for the first time in 45 years, Business Insider reported. 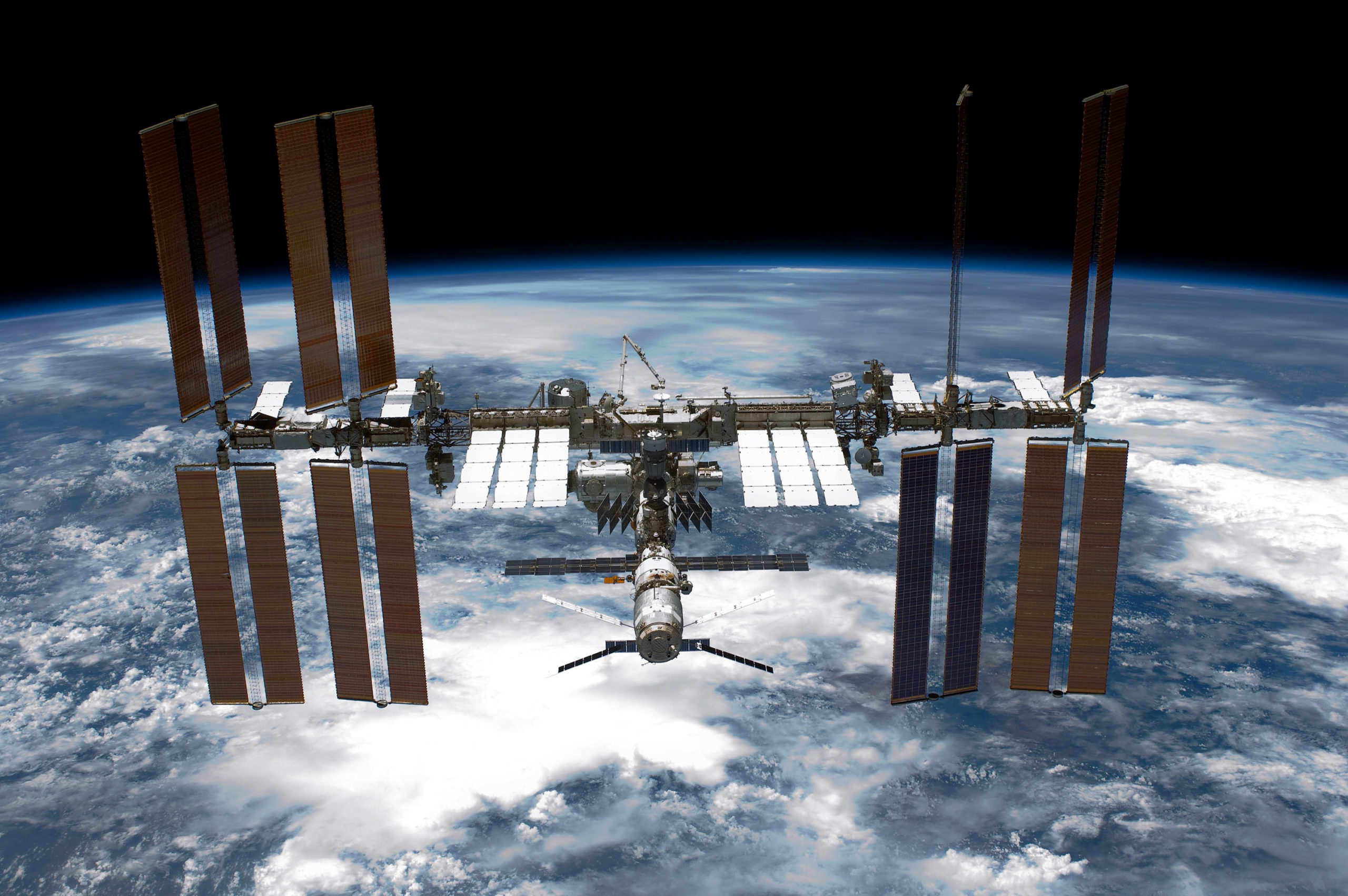 Back dropped by planet Earth the International Space Station (ISS) is seen from NASA space shuttle Endeavour after the station and shuttle began their post-undocking relative separation May 29, 2011 in space (NASA via Getty Images)

But space-based assets are becoming increasingly more relevant due to their military, commercial and civilian applications. The U.S. government has taken an interest in outer space for decades for security and economic purposes but adversarial nations like China and Russia could soon pose a challenge to American assets, according to a 2019 Defense Intelligence Agency report.

The U.S. space strategy has gone under the radar during the 2020 election cycle but Trump has taken decisive action to reinvigorate the national space program. (RELATED: President Trump Continues To Make Space A Priority)

Trump’s first action on space policy was signing an executive order to re-establish the National Space Council in June 2017. The executive branch body was created in 1989 by President George H. W. Bush but disbanded only four years later. Vice President Mike Pence is the current chairman and the Council handles a number of policy issues related to the U.S. space strategy. 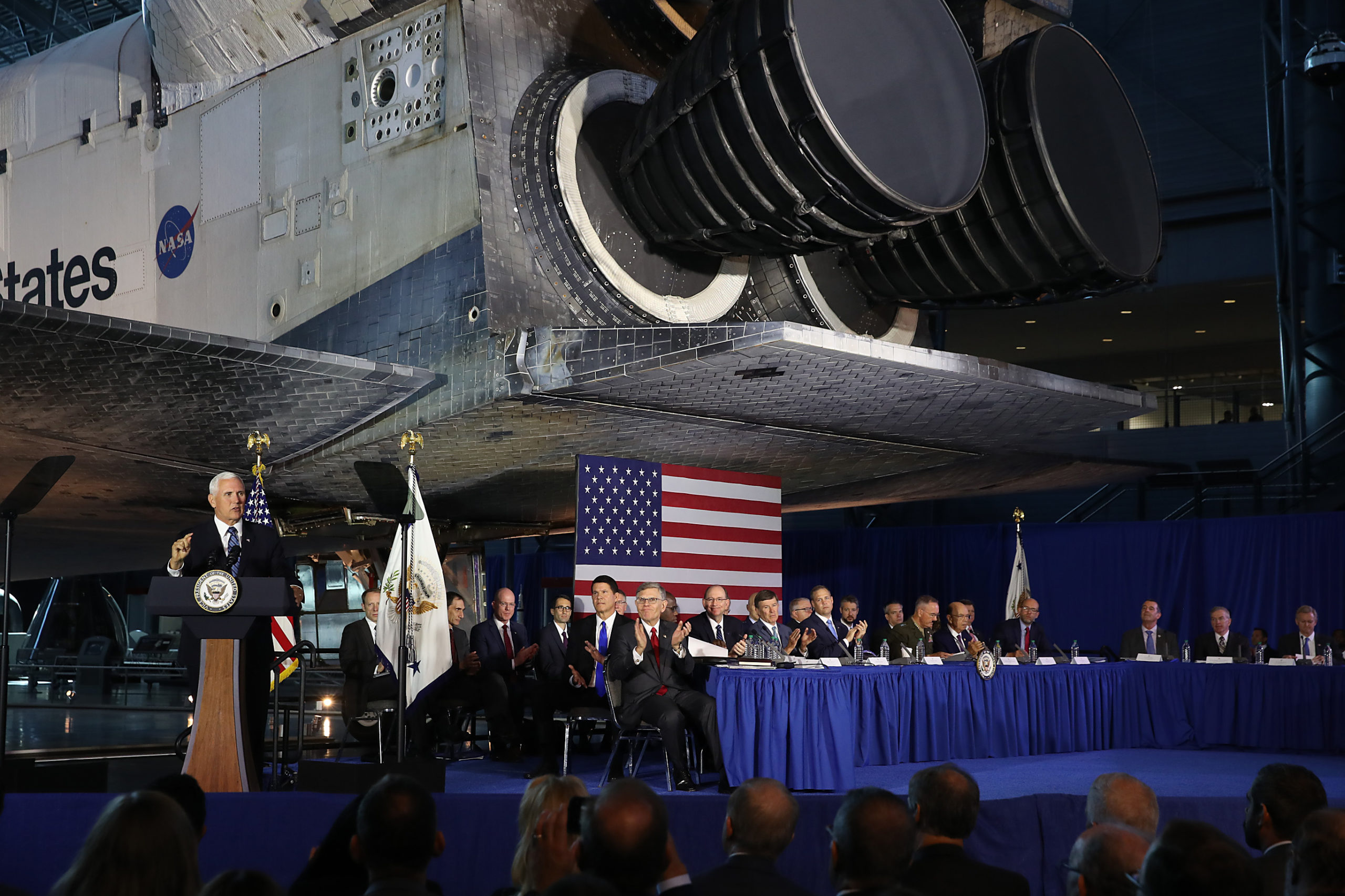 The Space Shuttle Discovery is the back drop as U.S. Vice President Mike Pence speaks during the 6th meeting of the National Space Council (Mark Wilson/Getty Images)

Trump’s first budget request for the 2018 fiscal year maintained NASA’s budget and kept Obama-era programs like the Space Launch System in place. But the budget also rolled back Obama-era priorities that focused on Earth science research and climate initiatives, according to Scientific American.

The Trump administration enacted a series of Space Policy Directives between 2017 and 2018 that are likely to have a significant influence on the direction of space policy in the next several decades. These presidential memoranda are long-term initiatives that arguably breathed life back into the national space program.

Space Policy Directive-1 was issued in December 2017 partly as a revision of the space policy framework adopted by the Obama administration. The directive notably mentioned that the administration would prioritize “the return of humans to the Moon for long-term exploration and utilization, followed by human missions to Mars and other destinations.”

Space Policy Directive-2 was issued in May 2018 and included a number of actions on the commercial use of outer space. The U.S. government and private sector groups are already eyeing the economic applications of travel and operations in outer space, and the Bureau of Economic Analysis reported that global space activity was worth $414.8 billion in 2018.

Space Policy Directive-3 was issued one month after its predecessor and largely focused on regulations to avoid collisions between space-based assets and reduce orbital debris and other hazardous material. But Trump’s remarks during the signing of the memorandum indicated that a much larger project was in the works.

“When it comes to defending America, it is not enough to merely have an American presence in space. We must have American dominance in space,” Trump told attendees. “Very importantly, I’m here by directing the Department of Defense and Pentagon to immediately begin the process necessary to establish a space force as the sixth branch of the armed forces.”

American operations in space had been under the jurisdiction of the Air Force Space Command since 1982, but Space Policy Directive-4 issued in October 2018 outlined plans to establish Space Force as a separate military branch. (RELATED: Trump To Receive Official Space Force Flag And Declare New ‘Armed Forces Day’)

The Space Force was officially established in December 2019 after Trump signed into law the 2020 National Defense Authorization Act. “Space is the world’s new war-fighting domain,” Trump said during a signing ceremony. “Among grave threats to our national security, American superiority in space is absolutely vital.”

The newest service branch in 70 years has continued to develop its organizational structure in 2020 and currently has roughly 2,500 service members, Stars and Stripes reported. The Space Force is also represented in the Joint Chiefs of Staff and is led by Chief of Space Operations Gen. John Raymond.

Trump’s impact on the U.S. space strategy is likely to persist after his presidency comes to an end, whether that be in 2021 or 2025. The Space Force is unlikely to be rolled back by a potential Democratic administration, even if anti-Trump lawmakers once criticized the idea.

Outer space and the advancement of space policy is not a partisan issue. SpaceX successfully launched NASA astronauts into outer space for the first time in a decade. Trump expectedly praised the launch, but so did Democratic presidential nominee Joe Biden — he also vowed to keep up space exploration if elected, The Hill reported. 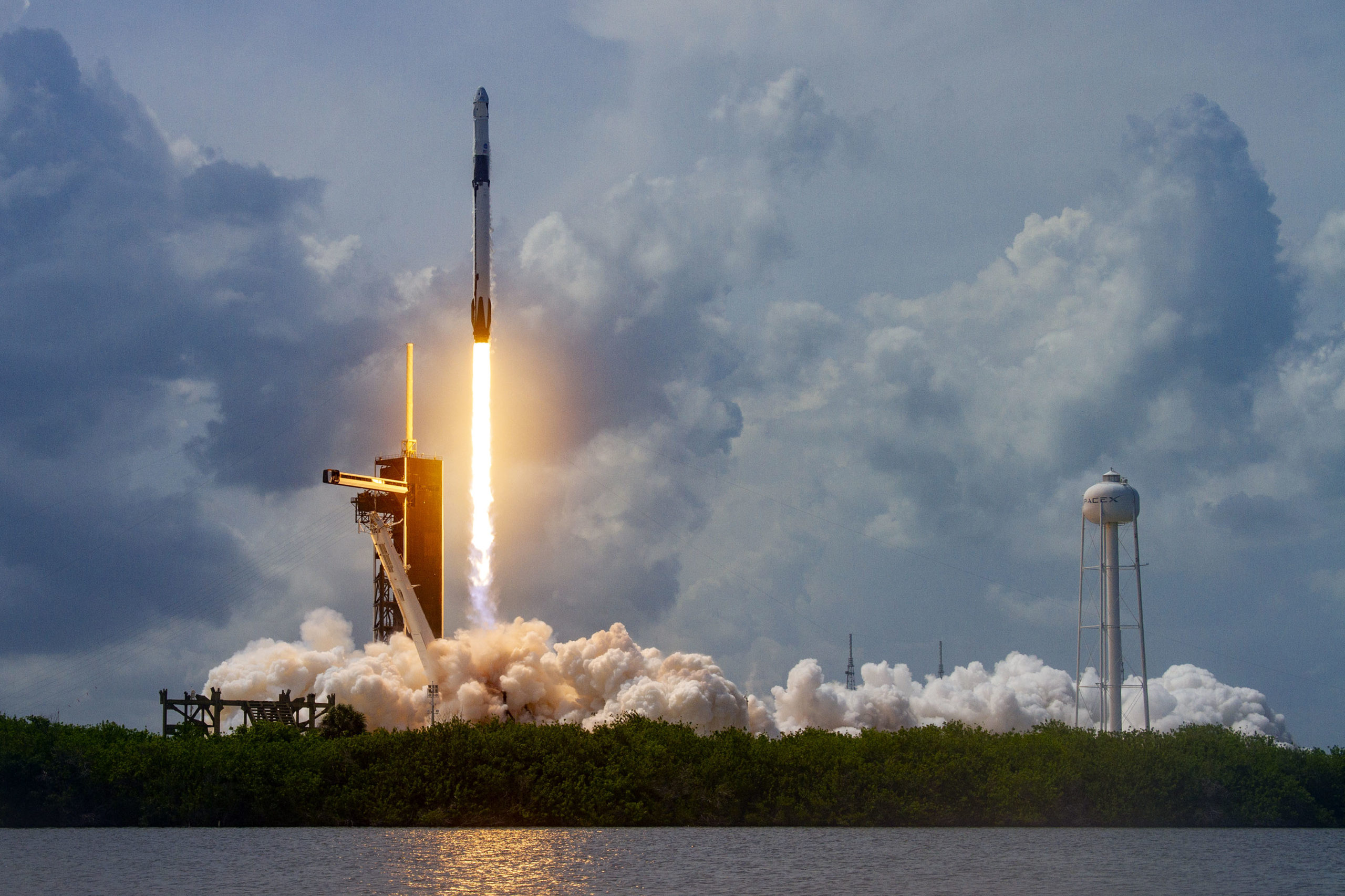 A Falcon 9 rocket carrying the company’s Crew Dragon spacecraft launches on the Demo-2 mission to the International Space Station with NASA astronauts Robert Behnken and Douglas Hurley onboard at Launch Complex 39A May 30, 2020, at the Kennedy Space Center, Cape Canaveral, Florida (SpaceX via Getty Images)

It is unclear what a Biden presidency would mean for the future of space policy given that the subject has hardly been discussed during the election cycle, but he is more likely to place emphasis on NASA’s climate science and research policy, according to Quartz. The Democratic Party platform also endorsed human space exploration, including travel to the moon and Mars.

Reviving the national space program and strengthening American leadership in outer space is a bipartisan issue. A potential Biden administration could roll back certain Trump-era programs just as Obama did with Bush-era programs, but major advancements like the Space Force are likely here to stay.

The implications of Trump’s space policy may not be widely discussed in popular political discourse, but they are noteworthy and arguably will have a positive effect on U.S. national security, economic development and humanity as a whole.