Only one third-party candidate has achieved more than 5% since Ross Perot garnered 10.1% of the popular vote in 1996. Libertarian presidential candidate Gary Johnson earned 6% nationally in 2016, taking critical votes from then-candidates Trump and Clinton. At the state level, Johnson and fellow third-party candidates Jill Stein and Evan McMullin snatched crucial votes from the major party tickets in 2016. So what does the third-party effect look like in 2020? 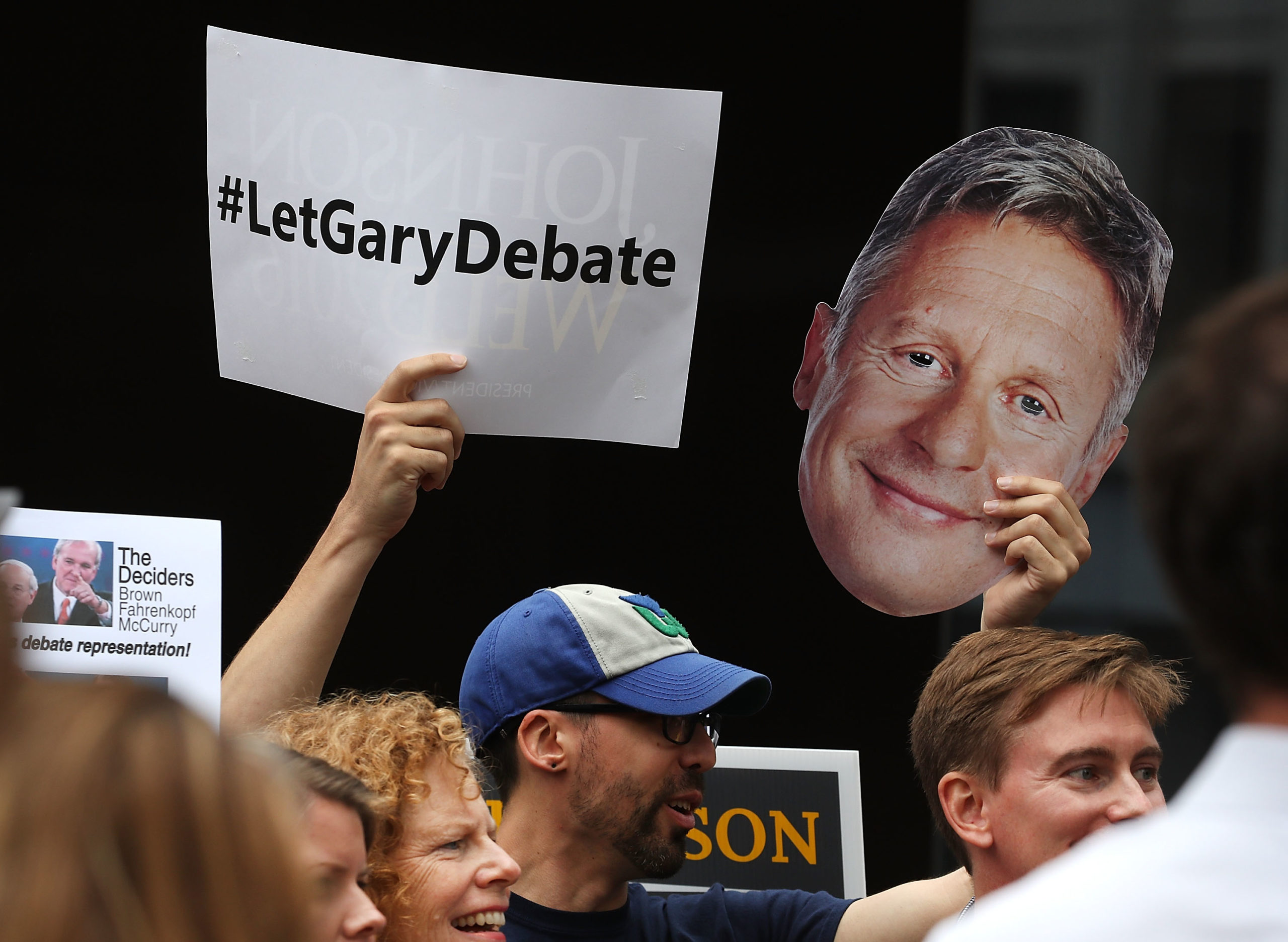 WASHINGTON, DC – SEPT. 30: Supporters of Libertarian presidential candidate Gary Johnson rally in front of the Commission on Presidential Debates Sept. 30, 2016 in Washington, DC. The rally was held to urge the CPD to let Johnson participate in the two remaining presidential debates. (Photo by Mark Wilson/Getty Images)

Experts note that the national electoral pull of the third-party candidates in 2020 could be similar to recent elections. A survey conducted by Pew Research Center from Sept. 30 to Oct. 5, though, shows that the support — while nearing the overall total in 2016 — is far off of the projected numbers at a similar point in the previous presidential election.

“At a similar stage in the presidential cycle in 2016, 14% of registered voters said they planned to vote for a third-party candidate,” according to Pew.

Pew also found that voters who cast their ballots for third-party candidates in 2016 lean towards Biden in 2020.

“Biden also holds a modest advantage among those voters who say they supported Gary Johnson, Jill Stein or someone else in 2016: 49% say they lean toward or support Biden, while 26% say they support Trump. A quarter say they plan to vote for a third-party candidate again in 2020,” according to Pew.

Michigan’s 2016 electoral breakdown offers a view of third-party power and how the weight it adds can tip already precarious battleground scales. While Trump narrowly defeated Clinton by a margin of 0.3%, Johnson and Stein’s combined effort gave them over 4% of the vote.

Similarly, in battleground Wisconsin where Trump edged out Clinton by 3%, Johnson, Stein and write-in candidates gleaned 5.3% of the vote. In Florida, too, the margin of Trump’s win was slightly less than the vote tally of the third-party tickets aggregate total.

Current Wisconsin polling averages have Democratic Presidential nominee Joe Biden leading Trump by 6.1 %. According to a Marquette University Law School poll released Oct. 7, Biden is the choice of 46% of likely voters. “Trump is supported by 41%. Libertarian candidate Jo Jorgensen is the choice of 4%, while 8% say they would vote for none of these candidates, don’t know how they would vote or decline to say.”

Voters can look to Georgia for a good example of where the third-party effect could take hold in 2020. Trump defeated Clinton in Georgia by nearly 6% in 2016. Polling averages for the new battleground state show a neck-in-neck competition with Biden edging out Trump by 1.2%. Gary Johnson earned a modest 3.1% of the vote in the state in 2016.

A poll in late September from the Atlanta Journal Constitution shows Jorgensen carrying 1% of the Georgia vote. A modest showing for the Libertarian candidate could prove the deciding factor for either Biden or Trump if turnout for Jorgensen consists of defectors from a major party. (RELATED: Trump Jokes About Leaving The Country If He Loses To ‘The Worst Candidate In The History Of Politics’)

By the slimmest possible margin, I might caution. Biden has a 51% chance of winning Georgia and Trump 49%, per our forecast. Our model’s priors favor Trump in Georgia but there’s been enough good polling for Biden there to counteract them. https://t.co/q6CWk5tCMh pic.twitter.com/Fjc1buWHaK

Kyle Kondik and J. Miles Coleman wrote for Sabato’s Crystal Ball at the University of Virginia’s Center for Politics that Biden would benefit more from third party voters in 2020 because voters would have more alternatives.

“Generally speaking, we think Biden would benefit more from a straight-on head to head election with Trump, because it would force Trump disapprovers — a larger group than Trump approvers nationally — to choose the only anti-Trump alternative. If Trump disapprovers have a larger menu of anti-Trump options, some of them might choose candidates other than Trump,” Coleman and Kondik wrote.

Kondik and Coleman wrote, too, that the divisive state of American politics might limit the third-party’s effect. In a sense, the us versus them mentality among the major party platforms could mitigate a 2016 style burst of support for alternative candidates.

“Partisan polarization, as well as the grim realities of the 2020 national outlook and the starkly opposing political beliefs of Trump supporters and opponents, should serve to focus the minds of voters, and accentuate the very real differences between the two major party candidates. That all may act to reduce 2020’s third party vote,” Coleman and Kondik wrote.