NRA American Rifleman Contributor
October 22, 2020 3:27 PM ET
Font Size:
By Kelly Young, American Rifleman
–
Previously, we’ve discussed how Silencer Central is revolutionizing the suppressor-buying process. You can take a look at the details of the company’s method here. Sure, its procedure is a major step forward, but how is Silencer Central’s product?

Five models currently populate the manufacturer’s Banish line, and they address most of the suppressor industry’s most popular segments—a .22-cal. rimfire, a .223-cal. center-fire, two .30-cal. rifle cans (one direct-thread and one quick-detach) and a .45-cal. pistol silencer. I worked with Maddox to get a Banish 30—the company’s .30-cal., direct-thread rifle model—sent in to NRA Headquarters for testing and evaluation. 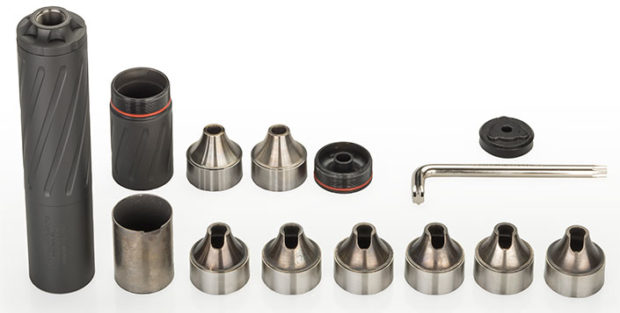 Unlike most .30-cal. rifle cans, the all-titanium Banish 30 is easily user-serviceable using a supplied Torx wrench and tool key. A modular design, it makes use of eight baffles in its long configuration and six in its shortened form.

–
The concept by which a suppressor functions is actually quite simple: Following the ignition of a cartridge, the resulting propellant gases are moving exceedingly quickly, at incredibly high temperatures, and they exit the firearm’s muzzle all at once.

A suppressor provides an additional chamber in which the gas can expand, allowing it to both cool and slow down somewhat before it reaches the open air—an effect that is amplified by a series of successive baffles within the silencer that disrupt the flow of the gas as much as is possible before it exits. Since the human ear is only sensitive enough to interpret a gunshot as a single, loud impulse, lengthening the duration of that sound reduces its peak intensity and, by extension, the damage it can cause to the relatively fragile structures of the ear.

American Rifleman’s protocol for evaluating the effectiveness of a suppressor requires the use of a sound meter, in this case a Larson Davis LxT1, to measure the average volume (in dBs) of a five-shot group through the silencer at two points—2 ft. from the muzzle of the firearm and 6″ from the shooter’s ear.

The procedure is then repeated through the unsuppressed host firearm (using either the gun’s bare muzzle or the included quick-detach mount, depending on the design of the specific silencer being evaluated) in order to establish a baseline by which we can determine just how much sound suppression is occurring. Between each shot fired there is a three-minute cooldown period, and, whenever possible, both a subsonic and a supersonic load is tested through the suppressor.

The Banish 30 in its entirety, from its body tube and its baffles to its mount and its end cap, is composed wholly of titanium (as is the majority of the Banish line)—and, as a result, it weighs considerably less than most suppressors of similar size. It’s a modular design that employs eight baffles in its full 9″, 13.1-oz. configuration, and six baffles in an abbreviated 7″, 10.8-oz. mode.

The only real downside to suppressors is that the added weight, affixed as far forward on the gun as is physically possible, can render the host firearm unwieldy, but the Banish 30’s all-titanium construction largely mitigates that issue—particularly in its more compact layout. It measures 1.5″ in diameter, and its direct-thread mount is threaded 5/8×24 TPI, the industry standard for .30-cal. firearms.

In my experience, the vast majority of .30-cal. suppressors on the market top out at a maximum cartridge rating of .300 Win. Mag.—but the Banish 30 is rated all the way up to .300 Wby. Mag. As Weatherby’s .30-cal. magnum generates a couple hundred extra foot-pounds of energy at the muzzle compared to Winchester’s, this makes the Banish 30 just a bit heartier and more versatile than most of its competition. It is rated for limited full-automatic use with .22 Long Rifle, .223 Rem. and .308 Win.—the “limited” basically just meaning no belt-feds.

Silencer Central recommends re-tightening the Banish 30 onto the firearm’s muzzle threads after every 30 rounds fired, and I personally check after about every five discharges. But use caution; if firing supersonic ammunition, the suppressor will very likely be scaldingly hot by the end of a range session—as capturing the searing gases caused by ignition is kind of the whole point of a can.

Rare among center-fire rifle silencers, the Banish 30 is fully user-serviceable, and disassembly of the can just requires the use of an included Torx wrench and tool key to loosen and twist off the end cap. At this point, the two extension baffles can be removed from the front of the unit, and unscrewing the extension tube by hand frees up the remaining six baffles for removal.

There is no designated blast baffle—the one positioned first in the sequence and thus the one that sustains the largest blast of heat and pressure—and the Banish 30’s ability to be fieldstripped allows users to rotate the baffle order, potentially spreading the wear around and extending the suppressor’s service life.

Another perk of the Banish 30’s ability to be fieldstripped is its potential compatibility with rimfire ammunition, which is generally so dirty that its use in a suppressor requires frequent cleanings—something that can’t typically be done to sealed rifle cans. Yes, .22 Long Rifle-chambered firearms with 5/8×24 TPI barrels are few and far between, but the capability is there nonetheless, and adapters from 5/8×24 to 1/2×28 TPI are available.

Throughout our testing, thread alignment between the direct-thread Banish 30 and its Mossberg Patriot Predator host (above) was ideal.

–
Our testing protocol for center-fire rifle suppressors doesn’t include a cleaning requirement like our rimfire protocol does, (as most center-fire cans aren’t set up to do so), but in this case I decided to take advantage of the Banish 30’s user-serviceability by fully cleaning the unit between the testing of each load.

I also decided to test both the long and short configurations of the silencer, and it was thoroughly cleaned when switching between the two lengths as well. Maintenance of the baffles and the expansion tube consisted of a 30-minute cycle through Hornady’s Lock-N-Load Hot Tub sonic cleaner, followed by a quick wipe—and the body tube and end cap only required a brief brushing of their threads.

I’m not entirely certain that the Banish 30’s ability to be disassembled for maintenance is a necessity—my personal .30-cal. center-fire can is still plugging away after zero cleanings in several years of moderately hard use—but it’s nice to have that option. Suppressors become less efficient as they get dirtier and internal volume decreases, and I have to admit, there was a level of comfort to knowing at the beginning of a range session that the silencer was ready to operate at its mechanical best.

For my range work, I affixed the Banish 30 to a .308 Win.-chambered, 22″-barreled Mossberg Patriot Predator. I used SIG Sauer’s 150-gr. Elite Copper Hunting ammunition as my supersonic test load and Winchester’s 168-gr. Super Suppressed load as my subsonic choice. The supersonic SIGs averaged 155.84 dBs unsuppressed at the ear, and 136.88 dBs using the suppressor’s short configuration and 131.78 dBs using the full one at the same location.

That equates to an 18.96-dB reduction in the volume of the load using the shortened Banish 30, and an impressive 24.06 dBs of sound suppression through its longer version. On the subsonic side of the equation, the Banish 30 reduced the Winchester load’s report from 144.14 dBs unsuppressed at the ear to 121.34 dBs (a difference of 22.80 dBs) using the six-baffle configuration and 119.24 dBs (a reduction of 24.90 dBs) using all eight. Both of these figures were low enough that the subsonic bullets striking the steel backdrop downrange could clearly be heard.

Overall, these sound-mitigation results are excellent. And between its light weight and the modularity of its design, end users will have the choice of either prioritizing handiness by running the short configuration or maximizing effectiveness by using the long one—as well as the ability to change their minds at any time.

Point-of-impact shift was observed with both test ammunitions and both silencer lengths, but none were more than 3″ in any direction at 100 yds. At an MSRP of $979, the Banish 30 doesn’t come cheap, but this figure is well within the ballpark with the suppressor market’s few other 100-percent titanium, .30-cal. rifle options—as titanium is notoriously difficult to machine and hard to source.