A Students for Life of America (SFLA) group gathered in Philadelphia on Friday, Oct. 23 for a rally outside Pennsylvania Democrat Senator Casey’s district office urging him to vote in support of the appointment of Judge Amy Coney Barrett to the Supreme Court.

The SFLA group of about two dozen people chanted “fill that seat!” outside the district offices of Casey, a self-proclaimed pro-life Democrat. Casey has proven to be a proponent for abortion rights as his votes have aligned with Planned Parenthood 75% of his time in the Senate since 2011, according to Politico. (RELATED: OPINION — The Surrender Of Pro-Life Democrats)

Casey released a statement on Sept. 23 in response to President Donald Trump’s nomination of Barrett to the Supreme Court writing, “I cannot support a Supreme Court nominee who would rip health care away from tens of millions, undermine the rights of workers and do the bidding of large corporations.”

Barrett “just embodies true feminism, being a mom and being successful in her chosen career,” Hollendonner told DCNF. “Judge Amy’s confirmation to Supreme Court is, I think, in itself just showing the victory of first wave and second wave feminism in our country, and it should be a moment that every woman across America celebrates,” said SFLA’s President, Kristan Hawkins, in an interview with DCNF.

The SFLA group wrote in sidewalk chalk statements supporting Barrett along with various pro-life sentiments but were told the sidewalk outside of 2000 Market St. — which houses the office suite of Casey — was private property. A security staff member for the building demanded the SFLA group stop chalking, explaining that the group was defacing “private property.” 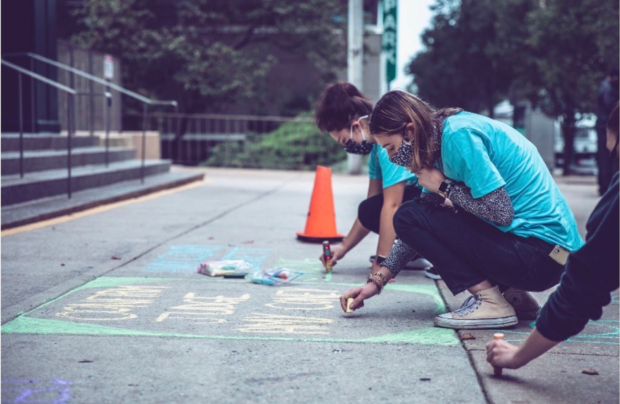 The Civil Affairs Unit further stated that the police would give the same explanation to the building’s staff if they were to call 911, Hollendonner said.

The building staff of 2000 Market St. hosed down the SFLA group’s sidewalk chalk once the rally had finished. 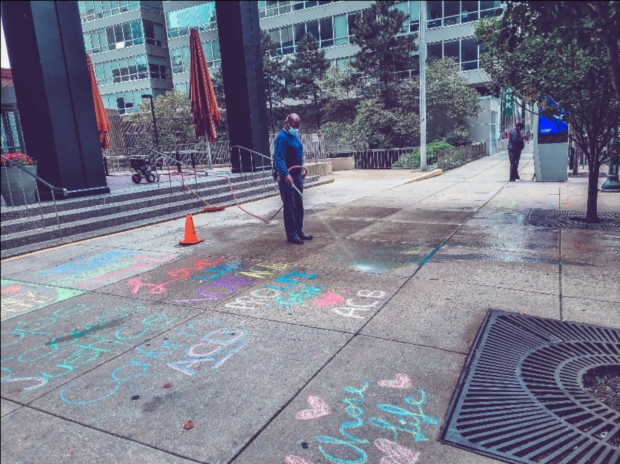 SFLA also gathered in other key swing states on Oct. 23 including Florida, Michigan, Pennsylvania, Arizona, Minnesota, North Carolina, Colorado and Washington where student groups rallied outside the office of each state’s respective senator to confirm Amy Coney Barrett to the Supreme Court.

“Our goal this week has been to go out into the states and just show the U.S. Senate this pro-life generation wants them to do their job and confirm Amy Coney Barrett to Supreme Court,” Hawkins told DCNF.

This weekend’s Justice for Life Tour comes after SFLA’s counter demonstration at the Women’s March in Washington D.C. last Saturday where the group faced much hostility, according to Hawkins.

The Pro-Life Generation SHOWED UP at the Women’s March today! We were vandalized, we were harassed, we were pushed, but we were not stopped! We let everyone know that PRO-LIFE is PRO-WOMAN! #Justice4Life #WomensMarch #WomensMarch2020 #ConfirmAmy #ConfirmACB

“The Democrats have tried very hard to make Amy Coney Barrett’s confirmation about the future of Obamacare, but what it’s really about is the future of abortion law in our country and that is why we saw what we saw just this past Saturday at the Women’s March and the violence against our team members and the threats of violence,” Hawkins said in an interview with DCNF.

Barrett did not commit to a position on overturning abortion precedent like Roe v. Wade, but emphasized before the Senate Judiciary Committee that although the late Justice Anton Scalia was a mentor of hers and who held a pro-life position on the court, this did not mean she would judge the same as him.

“For textualism, the judge approaches the text as it was written with the meaning it had at the time and doesn’t infuse their own meaning into it,” Barrett said during her nomination hearing. “But I want to be careful to say if I am confirmed, you would not be getting Justice Scalia. You would be getting Justice Barrett. And that is so because originalists don’t always agree. And neither do textualists,” she said.

Senate Majority Leader Mitch McConnell announced that the Senate will hold a vote to confirm Barrett to the Supreme Court on Monday, Oct. 26.