Two parent-run groups wrote a letter to Secretary of Education Betsy DeVos urging her to launch a civil rights investigation into the critical race theory training at some public schools in Virginia.

The letter was authored by Parents Against Critical Theory (PACT) and No Left Turn (NLTE), and calls on DeVos to investigate the “discriminatory and racist practices” at Loudon County Public Schools. 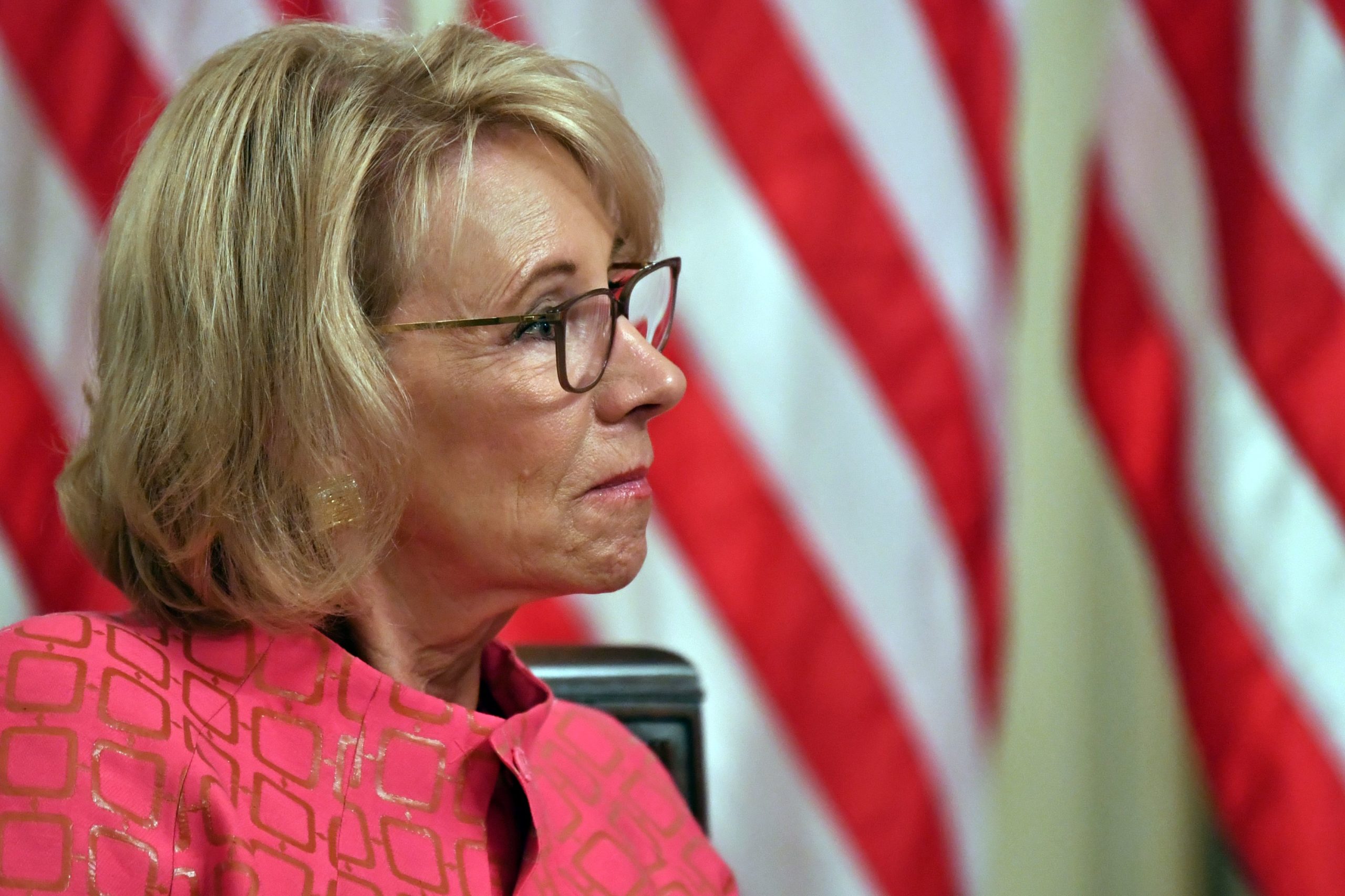 US Secretary of Education Betsy DeVos attends the “Getting America’s Children Safely Back to School” event in the State Room of the white House in Washington, DC, on August 12, 2020. (Photo by Nicholas Kamm / AFP) (Photo by NICHOLAS KAMM/AFP via Getty Images)

“It is imperative that the Department of Education investigate LCPS’s misguided and illegal use of critical race theory as a remedy,” the letter said.

The letter refers to a March 2019 meeting where the school board created an “ad hoc equity committee” that was “tasked with reviewing LCPS policies and practices to enhance equity.”

“It should be noted that the committee was not tasked to ensure equality or equal opportunity, but rather ‘equity,’” the letter claimed.

That same month, the district’s superintendent, Eric Williams, announced that optional “implicit bias” training for teachers and staff would be mandatory, and that a consultant would be hired to perform an “equity audit,” according to the letter.

The decision to include implicit bias training reportedly came after a Feb. 2019 Black History Month exercise involving an obstacle course meant to portray the Underground Railroad, according to WTOP. Many parents were upset after the incident, prompting Williams to consider the training and a group focused on equity in education.

An elementary school in Virginia is apologizing for cultural insensitivity after a physical education lesson featured a game that required students to imitate moving through the Underground Railroad https://t.co/JS75F9bJ1Z

Critical race theory is becoming orthodoxy in public schools. In Virginia, local officials declared that First Amendment rights “may be outweighed” if they conflict with “the goal to root out systemic racism.” This is the language of dogma, not education.https://t.co/6mEAVFpXhy

“LCPS initially contracted with the Equity Collaborative for $242,000 to engage in focus groups and produce an equity assessment, but costs eventually inflated to $422,000 for the services,” according to the letter.

“LCPS used federal funds to employ the Equity Collaborative to exclude parents from the focus groups that were not black or Hispanic. This is textbook discrimination on the basis of race,” it continued.

The district reportedly budgeted more than $1 million for its “Equity Office” as part of a “Comprehensive Equity Plan.” The plan highlights the school’s need to “right-size” disciplinary policies that have disparate impact on black students. Teachers are recommended to read books like “White Fragility” by Robin DiAngelo and “How To Be An Anti-Racist” by Ibram X. Kendi, according to the letter.

The district also launched an “Equity Ambassador Program,” which would involve discussion about racism, injustice and inequity, but the “opportunity is specifically for students of color,” the letter said, citing West Nova News.

“Thank you for your interest but this opportunity is specifically for students of Color,” a suggested response for the plan states, according to West Nova News. “However, students at each school have an option of creating an affinity group for students of Color who all share a similar racial identity and they may also include allies.”

The two groups call the program a “blatant violation of the United States Constitution.”

The program is intended to handle issues like racism and bias, which people in the school district don’t fully understand, according to the plan.

“Our systemic equity assessment indicated that there is a low level of racial consciousness and racial literacy in our division; discipline policies and practices disproportionately negatively impact students of color, particularly Black/African American students; many English Learners, Black/African American, Latin and Muslim students have experienced the sting of racial insults/slurs or racially motivated violent actions,” the plan said, according to West Nova News.

PACT and NLTE called on the Education Department to launch a Title VI investigation to determine whether the district violated the Civil Rights Act and President Donald Trump’s directive that ordered all critical race theory training at federal agencies to cease and desist.

The days of taxpayer funded indoctrination trainings that sow division and racism are over. Under the direction of @POTUS we are directing agencies to halt critical race theory trainings immediately.https://t.co/dyMeJka9rt

The Department of Education also targeted Princeton University, which has declared itself as systematically racist, prompting the Department to probe the university for violations of the Civil Rights Act.

“If LCPS is admitting that it is systemically racist, the Department of Education should proceed with an investigation just as it did with Princeton University,” the letter concluded.