The New York City Police Department (NYPD) on Oct. 24 told businesses within the boroughs to prepare for possible political violence, The Wall Street Journal reported Oct. 24. The department has reportedly been preparing for weeks to keep the city secure in the event of election-induced calamity.

The vice president of the New York-based Sergeants Benevolent Association, Vincent Vallelong, told the Daily Caller News Foundation that he hadn’t seen such disaster preparation in his city since the 9/11 terrorist attacks.

“Stuff like this was done during 9/11 when everybody went to 12-hour tours, but they basically put the whole job on alert right now,” Vallelong said during a phone interview.

“I’d be lying to you if I said I wouldn’t be worried,” he continued. “We’ve already seen cops get assaulted in New York the last time this broke out. This is something not to take lightly right now.”

And the vice president emeritus of the International Union of Police Associations, Dennis Slocumb, said: “Every city is preparing for it, it’s not just New York and Minneapolis. I would think that any police chief in any metropolitan area has probably been preparing for this for a while.”

Slocumb also indicated that law enforcement agencies can establish arrangements with surrounding departments, known as mutual aid, to establish contingency plans if more officers are needed to supplement a certain city’s police force. Those same authorities are likely to begin talks with local trauma centers and their respective fire departments, he said. 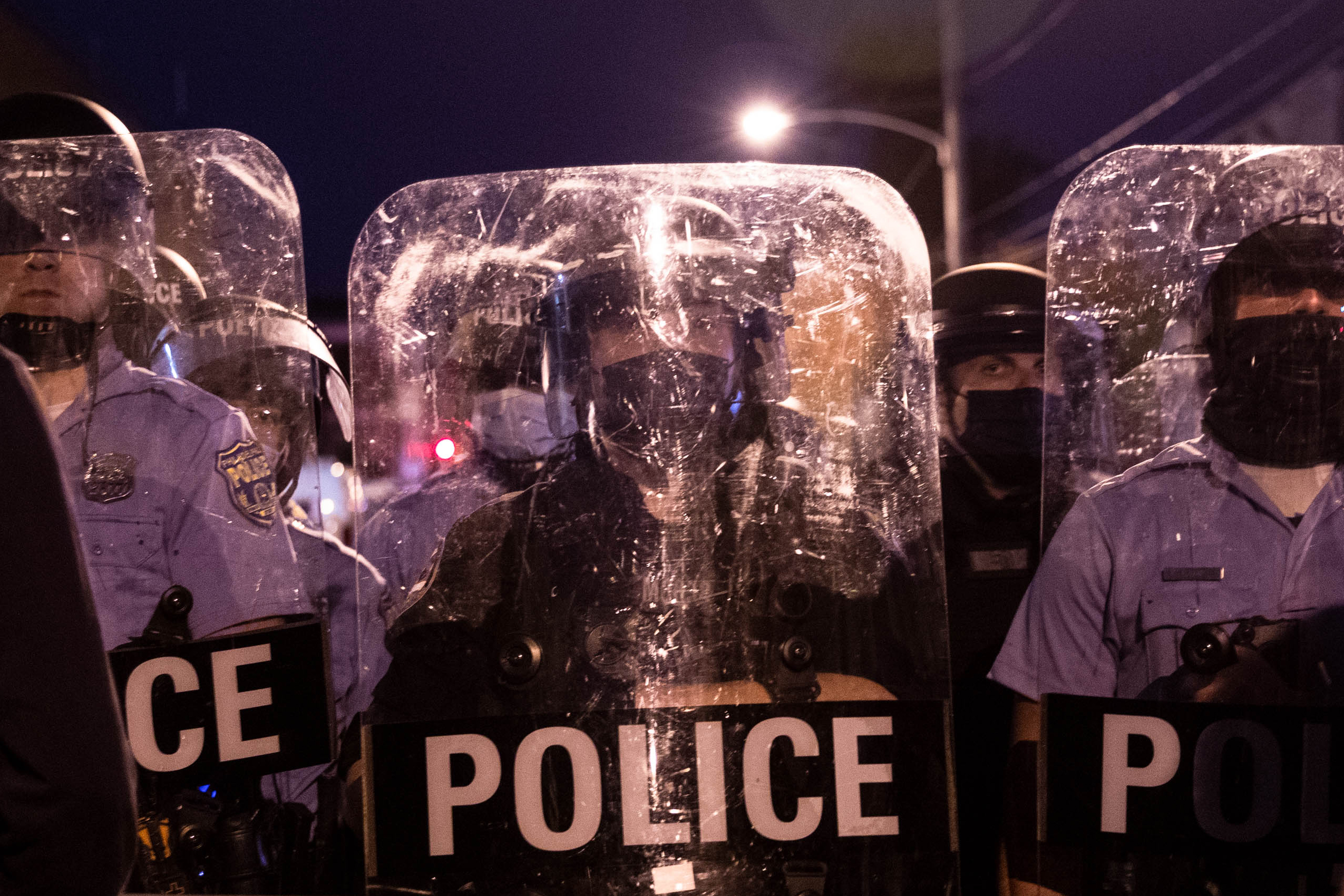 Police in riot gear face protesters marching through West Philadelphia on October 27, 2020, during a demonstration against the fatal shooting of 27-year-old Walter Wallace, a Black man, by police (GABRIELLA AUDI/AFP via Getty Images).

Vallelong, who’s an active sergeant with the NYPD, said police “should have the horses out, they should have everybody out in [riot] masks, and they should allow our judges to make decisions.”

He noted that instigators should be prosecuted to the fullest extent of the law, and that New York’s bail reform, which frees detainees that aren’t considered violent felons, “should be suspended.”

“Keep these people in the system until it gets under control,” Vallelong told the DCNF.

He said police department heads are in close contact with cities that were plagued by riots after the May death of George Floyd, like Portland and Seattle, in order to learn from past instances of unrest. He also added that the NYPD is most likely gathering intelligence ahead of Nov. 3.

The union official, however, insisted that the department’s response is contingent on the “marching orders” given by Democratic New York City Mayor Bill de Blasio’s administration. Vallelong said previous decisions by de Blasio during earlier racial justice riots proved to be ineffective.

“I know what should be done, but it’s gonna be a matter of what are the marching orders that are going to be given from city hall when all of this happens,” he said. “We know from the past with watching what we saw — they let everybody run loose and pretty much destroy everything in the city.”

Vallelong also said the NYPD is struggling with a lack of officers, as the department experienced a 75% surge in retirements compared to 2019, according to Newsday. (RELATED: NYPD Officers Reportedly Preparing To Deploy For Election Unrest In Coming Weeks)

Additionally, Yonkers, Westchester, and other New York agencies pledged to refuse to enter the city following a police reform bill that banned chokeholds and other methods of restraints, NBC New York reported.

“If it gets that bad and the NYPD can’t handle it, I don’t know of a bigger police department out there that could come and save them,” Vallelong said. “At that point you’re talking about the National Guard.”