A psychiatrist who previously advocated for a mental health check of President Donald Trump received backlash for a tweet comparing the president to Adolf Hitler.

Dr. Bandy X. Lee sent a tweet Monday morning stating that unlike Trump, Hitler improved the lives of his supporters. 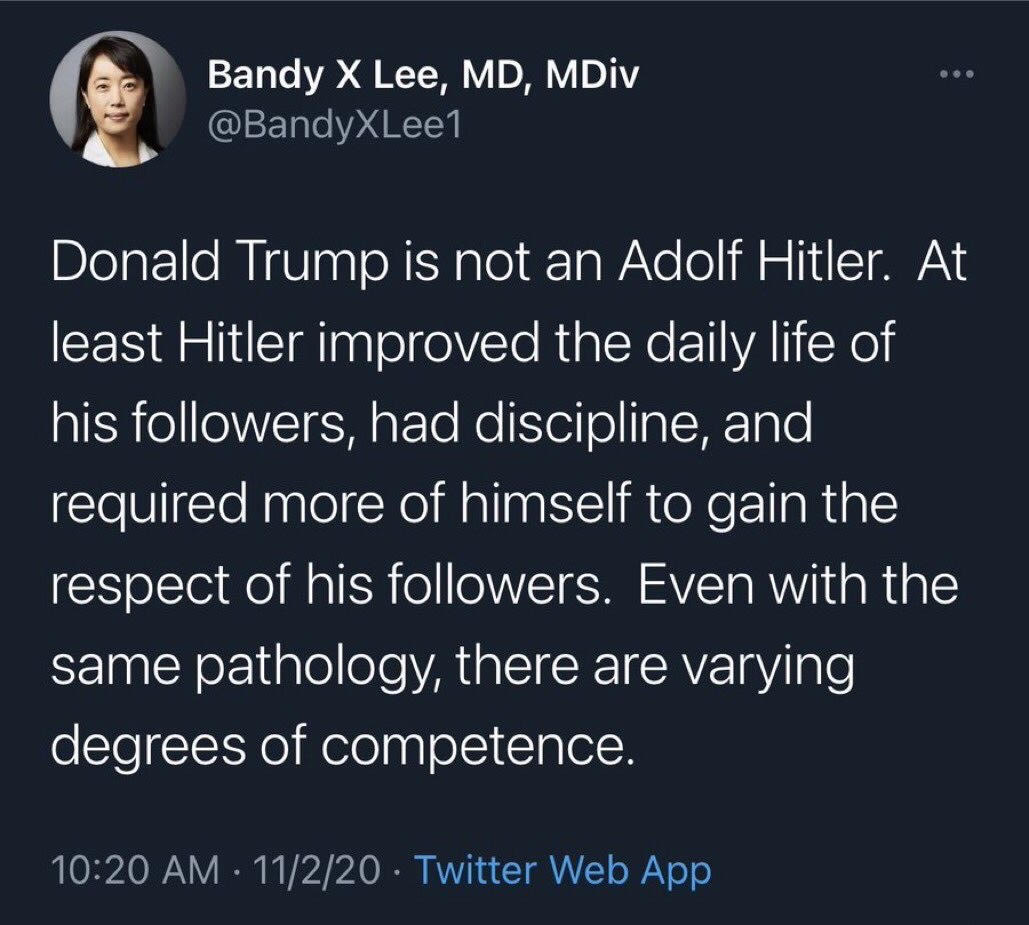 The now-deleted tweet came just hours after Lee retweeted a Guardian article critical of President Trump’s comments on Dr. Anthony Fauci. She wrote, “Uniform appearances, mindless chants, arms raised toward one “leader”. Remind you of anything?”

Uniform appearances, mindless chants, arms raised toward one “leader”. Remind you of anything?https://t.co/FjL1JyrXWa

The tweet was deleted shortly after its posting, however, Lee commented on the statement, writing that “it is at least heartening to know there is uniform denouncing of Hitler,” at which point she called the death toll from Covid-19 a genocide happening before us.

It is at least heartening to know there is uniform denouncing of Hitler. Since I specialize in treating violent offenders, I know Neo-Nazis and white supremacists never went away (they have been my patient base for 20 years!). Similar personalities usually attract one another.

Lee told the Daily Caller News Foundation that she took down the tweet because “people were fixated on a specific comparison, which was not the point. My focus was on the dangerousness of Donald Trump. This has always been a consensus within the mental health community.”

Lee said she was concerned “about public health and safety, which is our societal duty as health professionals.”

“This is the context in which I made my statement, which by itself is not as important than the danger Donald Trump poses (of note, he is not a danger so much because of his person, but because of the power that he is given through the office of the presidency),” she continued.

Lee garnered national attention in 2017 following her organization of a conference seeking to analyze the mental health of Trump. Following the conference, Lee remained a critic of Trump, as well as the American Psychiatric Association for their adoption of the “Goldwater Rule,” which disallowed comments on the mental health of public figures if they have never met with them in-person. (RELATED: Mental Health Professionals Urge House Committee To Consider Trump’s ‘Dangerous’ Mental State)

Lee later went on to co-author a collection of essays called “The Dangerous Case of Donald Trump,” which claimed there was a “clear and present danger” of President Trump to democracy and national security.

Lee was on CNN’s Reliable Sources with Brian Stelter last August to give her analysis of the President and has continually claimed that Trump is mentally impaired.

“Once we do a personal exam, a public figure becomes our patient, we are bound by patient confidentiality and cannot speak about matters relevant to protecting public health,” she said.