Former ESPN and MSNBC host Keith Olbermann called for the arrests of Tucker Carlson and President Donald Trump on Twitter.

Olbermann tweeted Thursday evening that “It is necessary to remove, and arrest, the president of the United States. Tonight.”

It is necessary to remove, and arrest, the president of the United States. Tonight.

In a tweet roughly an hour later, Olbermann also called for Carlson’s arrest in response to a tweet claiming Carlson said during his show that “Trump’s supporters own 60-70% of the guns & they could take to the streets blood ‘would flow.’”

“Again, this is an overt and unmistakable call for widespread violence and requires the arrest of @TuckerCalrson,” Olbermann tweeted. The tweet was later deleted. 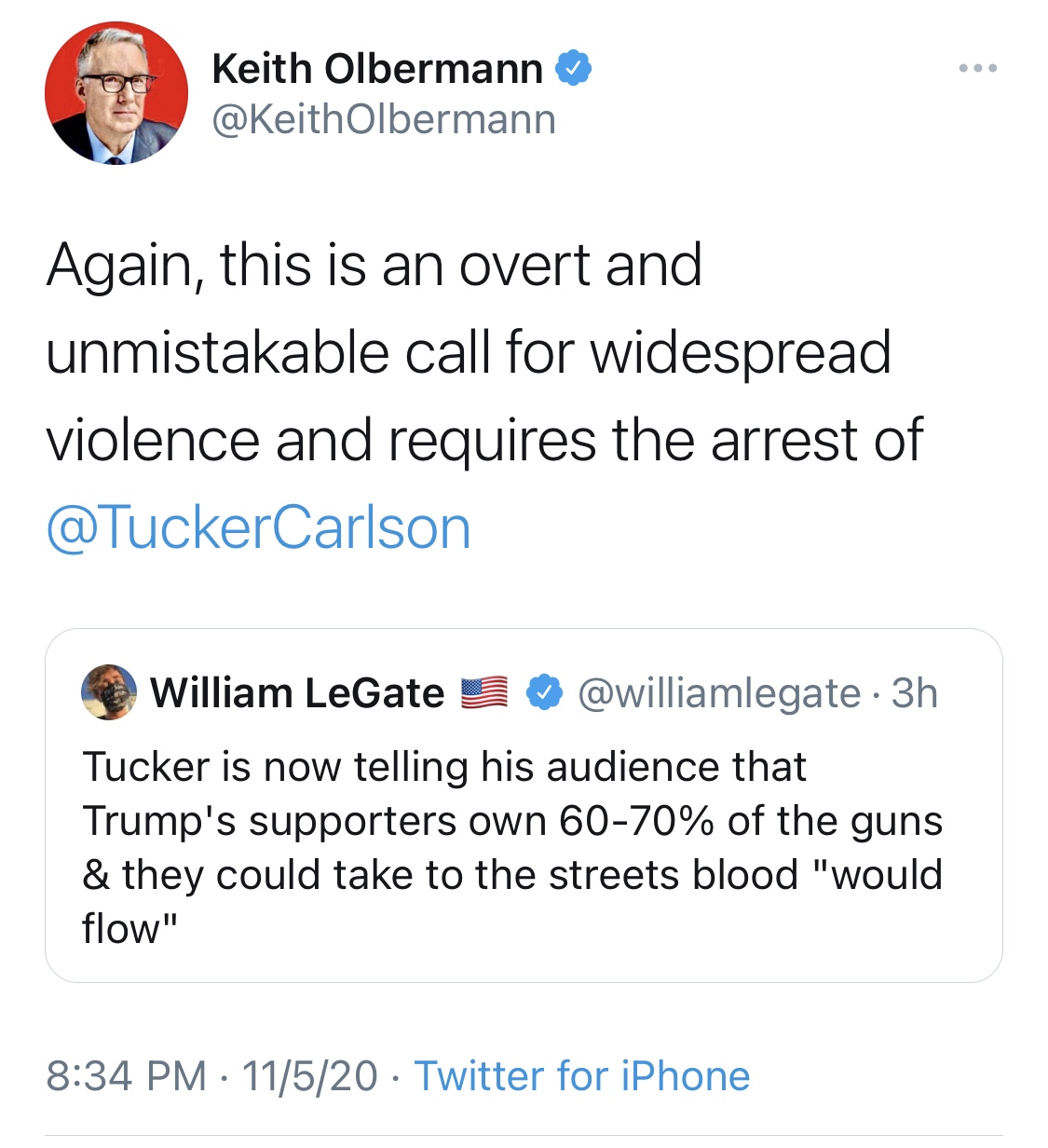 Again, this is an overt and unmistakable call for widespread violence and requires the arrest of @TuckerCarlson https://t.co/h5Y5fnClwC

Olbermann doubled down on calling for Trump to be removed in a tweet later in the evening, accompanied by a video.

TRUMP HAS LOST HIS MIND AND MUST BE REMOVED, TONIGHT. The coup attempt, we can survive. A mentally incompetent president, we may not. Instead, he will stay, and when he concedes he will simultaneously begin a campaign for 2024.

Olbermann has been reprimanded by ESPN for his tweets in the past. After tweeting and deleting a post that said a hunter in Mississippi’s life should be made a “living hell” after he shot a rare white Turkey, ESPN told Fox News that “we have spoken to him about not making personal attacks.” Olbermann apologized for the tweet.

I am an opponent of trophy hunting and remain so, but nobody should feel threatened. This was anything but my intent, so I unreservedly apologize to Mr. Waltman for this tweet.

Just logged back in: I apologize for my previous subtweet of this. I was using an old 70’s-80’s technique for calling somebody a c*** without writing/saying c***, just using a sound-alike to call Trump a c***

Deleting previous, largely because this one clarifies the c*** part https://t.co/hIIrt1Ke17

Olbermann’s Thursday tweet comes after Trump held a press conference where he echoed his brief address in the early hours of Wednesday morning, during which he said Democrats are attempting to “disenfranchise” voters and claimed that he “did win this election.”

Trump has litigation pending in Nevada, Wisconsin and Pennsylvania while judges have already thrown out Trump campaign lawsuits in Georgia and Michigan.