Roughly a week after the police shooting of Walter Wallace Jr., Philadelphia officials have released body camera video footage and 911 audio of the incident and have identified the officers involved, numerous sources reported.

Wallace’s family members say the police were called multiple times before the fatal shooting, and in separate calls, a neighbor and family member describe fighting, according to 6 ABC. 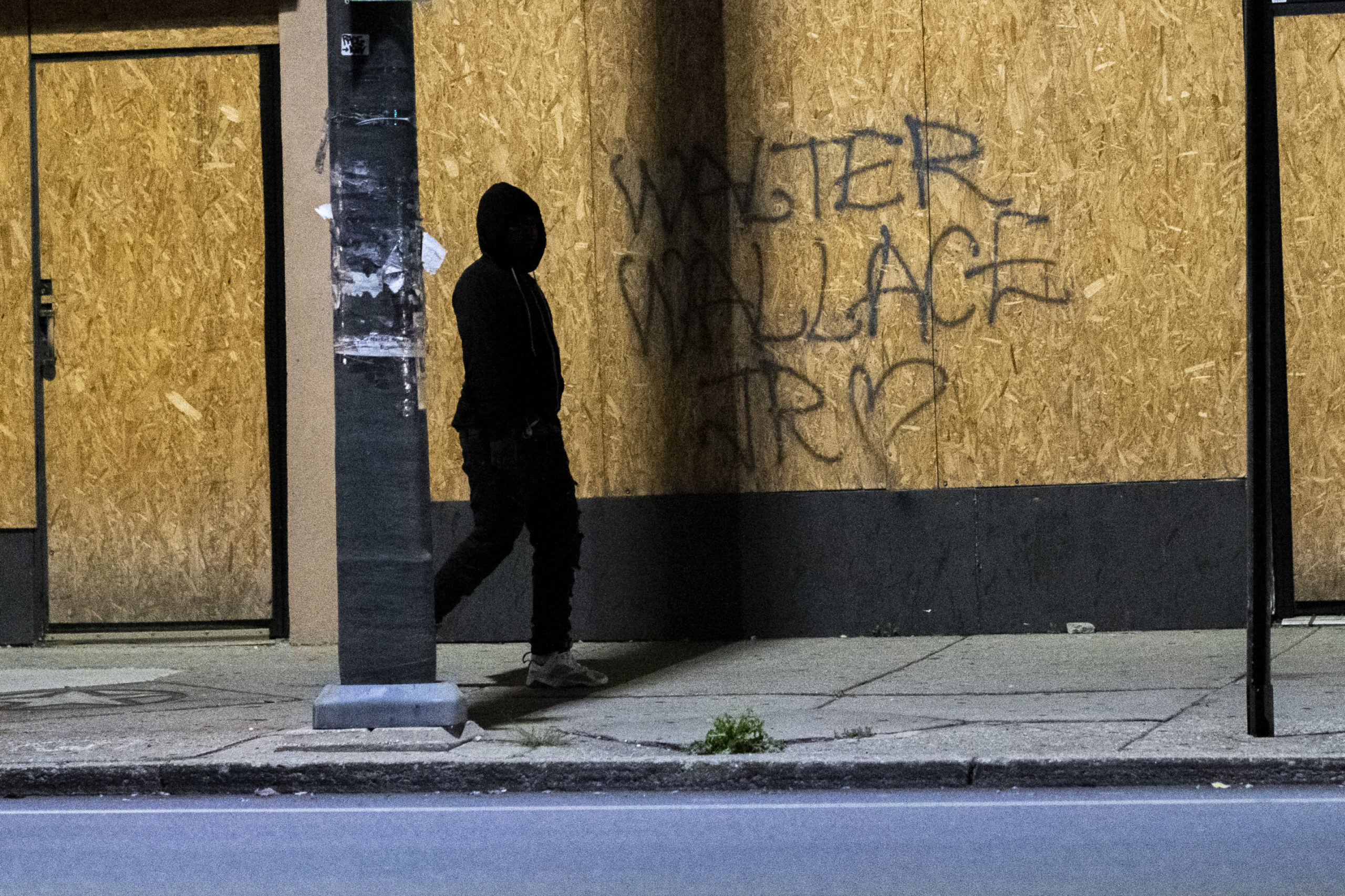 PHILADELPHIA, PA – OCTOBER 28: A man walks past graffiti stating “WALTER WALLACE JR” on a shuttered store after looting during a citywide curfew, on October 28, 2020 in Philadelphia, Pennsylvania. Mayor Jim Kenney will enforce a 9pm citywide curfew for Philadelphia after two consecutive nights of unrest in response to the fatal shooting of 27-year-old Walter Wallace Jr, a father of nine children, who Philadelphia police officers claimed was armed with a knife. (Photo by Mark Makela/Getty Images)

“Could you send the cops … the people next door are fighting,” one neighbor said in a call at 3:42:18 p.m, according to 6 ABC. Four seconds later, the police received another call from a family member who says Wallace is her brother.

“Any weapons involved?” asked the 911 operator.

“No, but he got … he’s on probation. He got a case for being violent, he got a whole record,” the woman responded.

“My mom needs help,” said a man on the call, according to 6 ABC.

The dispatcher also warned the responding officers in a radio transmission, according to 6 ABC. “Have the officers use caution responding… this is an ongoing domestic issue going on up there,” the dispatcher says. (RELATED: Body Camera Footage And 911 Tapes In Walter Wallace Shooting Will Be Released)

Outlaw had announced the same week as Wallace’s death that authorities would release the footage and tapes after speaking with Wallace’s family. The bodycam video release marked the first time in the department’s history that footage has been released to the public, according to 6 ABC.

In the footage, officers approach the home on the 6100 block of Locust Street, and as Wallace walks out of the house, the police begin shouting at him to “put the knife down now,” the bodycam video, per 6 ABC shows. Wallace walks down the steps, disregarding the multiple commands to drop the knife. Wallace enters the middle of the road, and a woman runs into the street to Wallace. “Ma’am, back up,” police shout repeatedly.

Two people follow Wallace as he walks on the sidewalk, and police continue shouting at him to “put the knife down now.” Wallace then walks into the street wielding the knife, and is shot multiple times.

At one point, an officer says “shoot him,” according to 6 ABC.

At least 14 total shots were fired by both the officers, but police couldn’t say how many times Wallace was struck, according to 6 ABC.

“We understand that the materials released today will be very painful,” Philadelphia Mayor Jim Kenney said, according to 6 ABC.

Wallace’s family says he had mental health issues. He had bipolar disorder and was in crisis during the time of the shooting, his family said, according to CNN.

Outlaw said that reforms anticipated to be enacted by late 2021 would address deescalation training for police and better coordination with mental health specialists.

“Under the new program, when behavioral health crisis calls come into dispatch from police radio, embedded clinical staff will work alongside dispatchers to determine the most appropriate response,” Outlaw said, according to 6 ABC.

Shaka Johnson, the attorney representing Wallace’s family, said the family is not pursuing murder charges because the officers were “improperly trained” and “did not have the proper equipment by which to effectuate their job.”

Shaka Johnson, the family attorney for #WalterWallace Jr, says he doesn’t think the family wants the officers who killed their son to be charged with murder because they were “improperly trained and did not have the proper equipment” pic.twitter.com/dyGxWLoQQ4

Johnson said that the city failed both the Wallace family and the police officers by not providing them with anything but a gun to “remedy” the situation.

“The city has failed, not only the Wallace family, not only the other members of that community, who will be scarred and traumatized for the remainder of their days, but the city has also failed those police officers, it failed them tremendously,” Johnson said, according to 6 ABC.

“The only remedy the police had, in that moment per their thinking, was their service weapon. There was no less lethal action available. And that has been our war cry.” 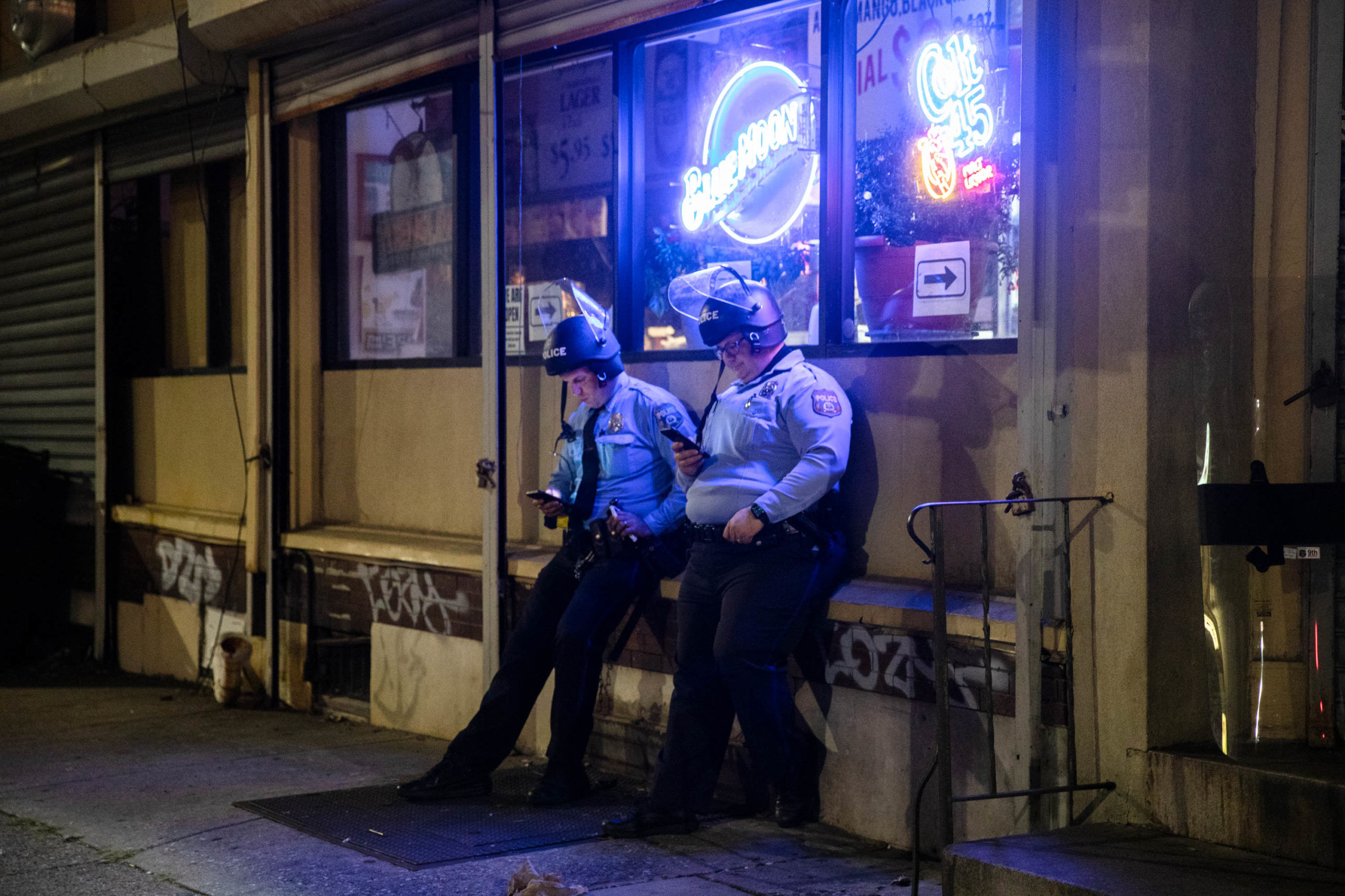 TOPSHOT – Police officers look at their mobile phones after the city imposed a 9pm curfew in Philadelphia, October 28, 2020, following two nights of protesting and unrest after the fatal shooting of Walter Wallace Jr. by police. (Photo by GABRIELLA AUDI/AFP via Getty Images)

The police union Fraternal Order of Police reportedly welcomed the release of the footage and tapes, but rebuked Kenney’s characterization of the incident as “police violence.”

“The real violence was perpetrated by a knife-wielding man, who confronted our police officers,” President John McNesby said in a statement, 6 ABC reported. “These officers followed their training and police department policy. It’s completely inappropriate that these officers continue to be vilified for doing their job.”