The president has tweeted a total of 50 times since Tuesday, November 2, as of Friday afternoon, and Twitter has flagged 12 of these tweets with the caption, “Some or all of the content shared in this Tweet is disputed and might be misleading about an election or other civic process.”

2020 presidential candidate Joe Biden has tweeted 77 times from his account beginning November 3. Not one of these tweets is currently flagged by Twitter.

A Twitter spokeswoman told the DCNF that Twitter teams are continuing to “take enforcement action on Tweets that prematurely declare victory or contain misleading information about the election broadly,” in line with Twitter’s Civic Integrity Policy and  guidance on labeling election results.

“We have and will continue to enforce our rules impartially to protect the integrity of the conversation around this election,” the spokeswoman said. (RELATED: Trump Team’s Allegations Of Widespread Fraud Are Not Supported By Their Own Lawsuits)

On Facebook, almost every single post by both Trump and 2020 presidential candidate Joe Biden since Election Day has been flagged, the DCNF found. Facebook did not immediately respond to a request for comment on the matter.

As of noon Friday, all Biden Facebook posts since Election Day are tagged with the comment: “Votes are being counted. The winner of the 2020 presidential election has not been projected.” (RELATED: ‘The Year Of The Republican Woman’: Here’s A List Of GOP Women Who Won 2020 Elections) 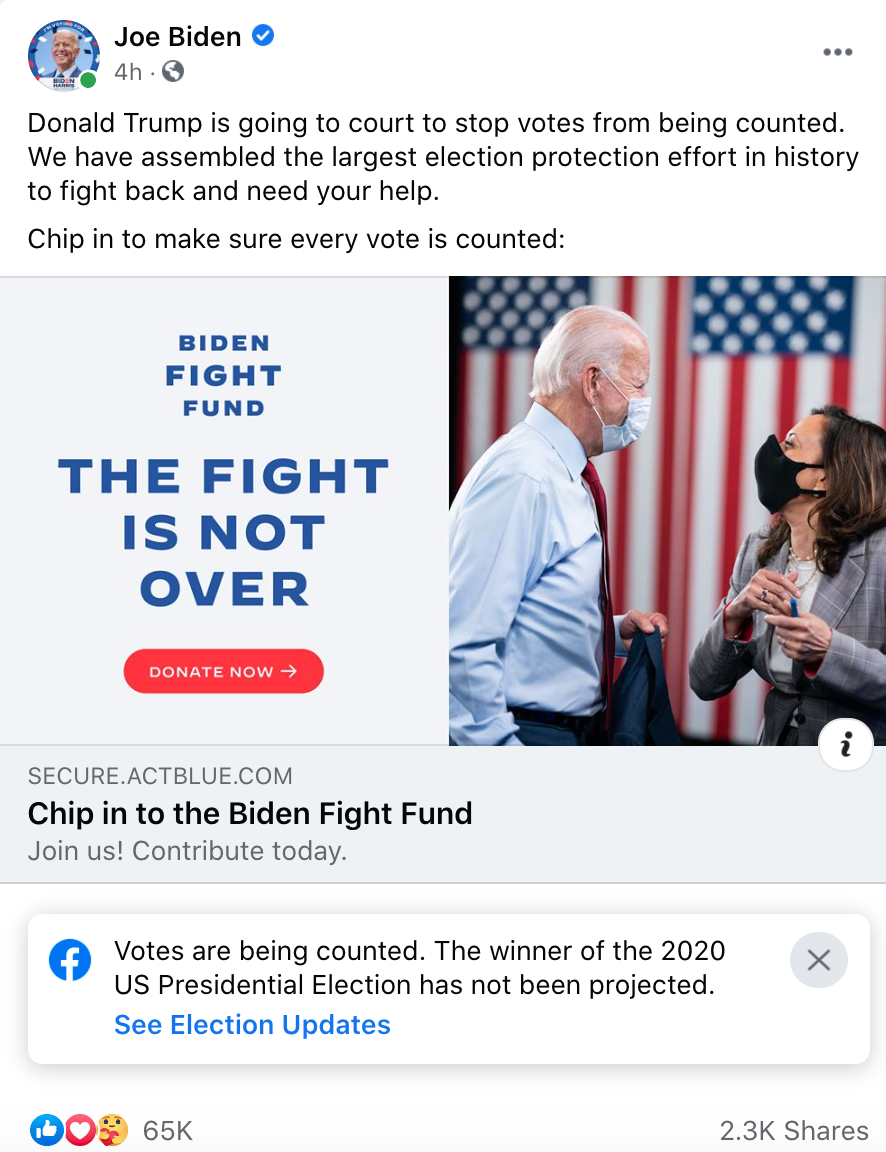 Many of Trump’s Facebook posts have also been tagged with the same comment about votes being counted.

Some of the president’s other Facebook posts are tagged with comments such as,”Differences between final results and initial vote counts are due to it taking several days after polls closed to ensure all votes are counted,” or “Election officials follow strict rules when it comes to ballot counting, handling, and reporting.” 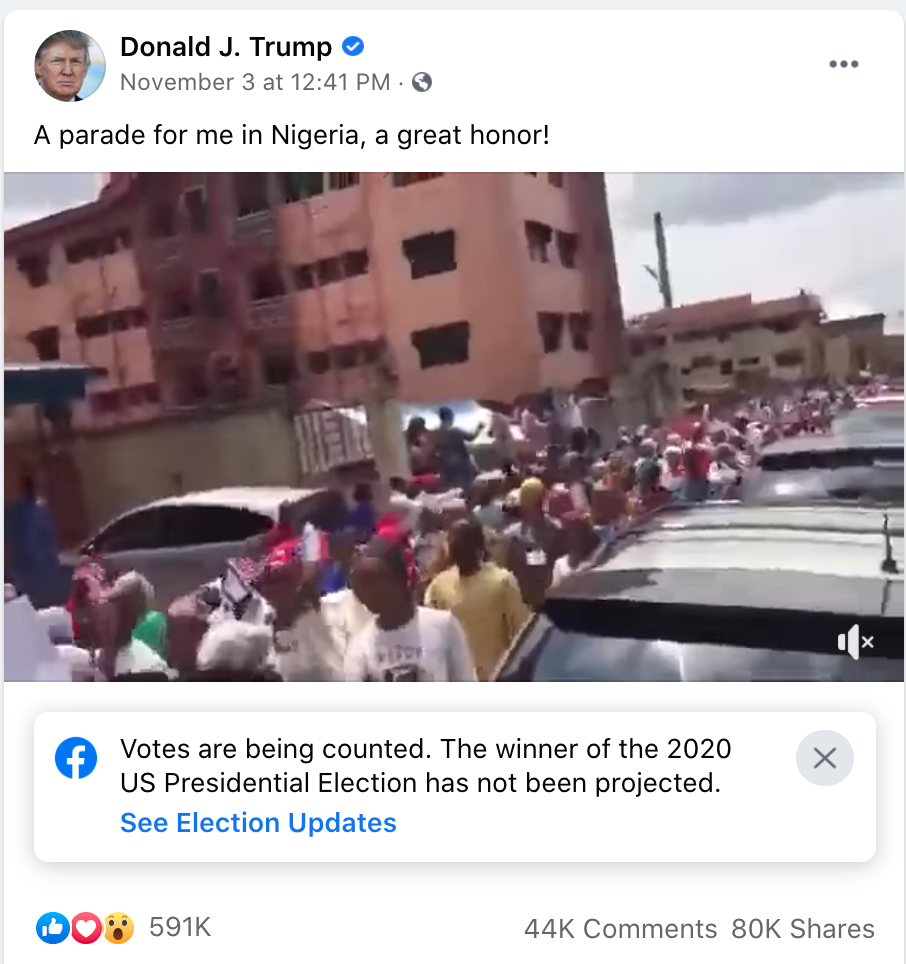 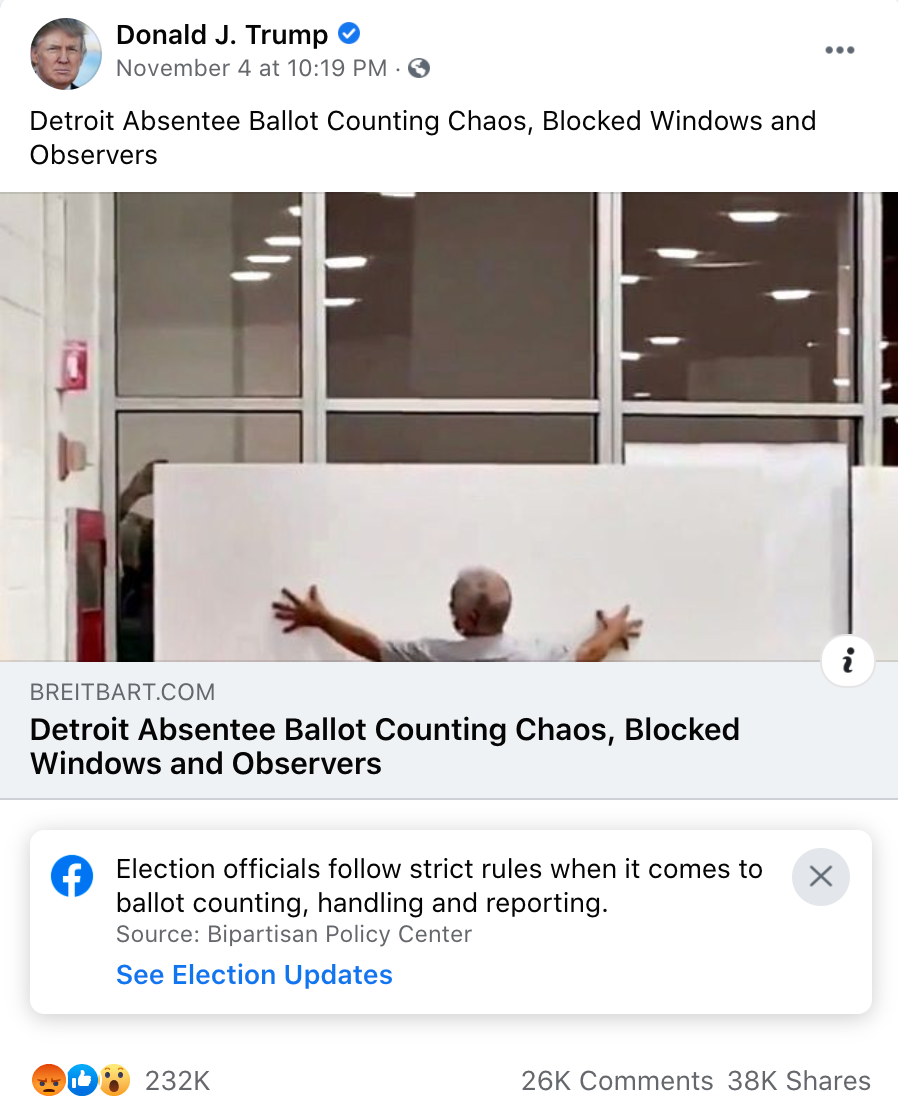 Instagram, which is owned by Facebook, has flagged all posts by both presidential candidates with the caption: “Votes are being counted. The winner of the 2020 US presidential election has not been projected.”

Folks, your patience is commendable. We feel good about where we are — we really do. We believe we’re on track to win this election, but we are going to have to be patient until the hard work of tallying the votes is finished.