As Americans anxiously await the election results in the few decisive states that have yet to be called, President Donald Trump’s campaign has signaled that it will pursue recounts in several battlegrounds including Wisconsin, Pennsylvania, Georgia and more.

Though Trump initially led by wide margins in each state, Democratic nominee Joe Biden pulled ahead in the days following as the states tabulated the influx of mail-in ballots. As of Friday afternoon, Biden leads by tight margins in five states that Trump won in 2016, and stands on the cusp of reaching the 270 electoral votes required to win the election.

Below is how and when recounts will unfold in the states that will decide who ultimately wins the election. (RELATED: There Have Been A Lot Of Allegations Of Election Fraud. We Looked Into Them)

Out of the nearly 5 million ballots cast in the Peach State, Biden holds an extremely slim lead of just 1,564 votes. Not only does his margin qualify for a recount under the state’s law, but officials themselves said Friday that a recount was likely to occur.

“Right now Georgia remains too close to call,” said Georgia Secretary of State Brad Raffensperger during a press conference Friday. “With a margin that small, there will be a recount in Georgia.”

Recounts can be requested as long as the final results are within 0.5%, Georgia state law says, and candidates have 48 hours in which they are officially certified to do so.

Though Trump led by over 15% in the state early Wednesday, Biden overcame the deficit Friday morning and now leads in the state by approximately 14,000 votes out of over 6.5 million cast. 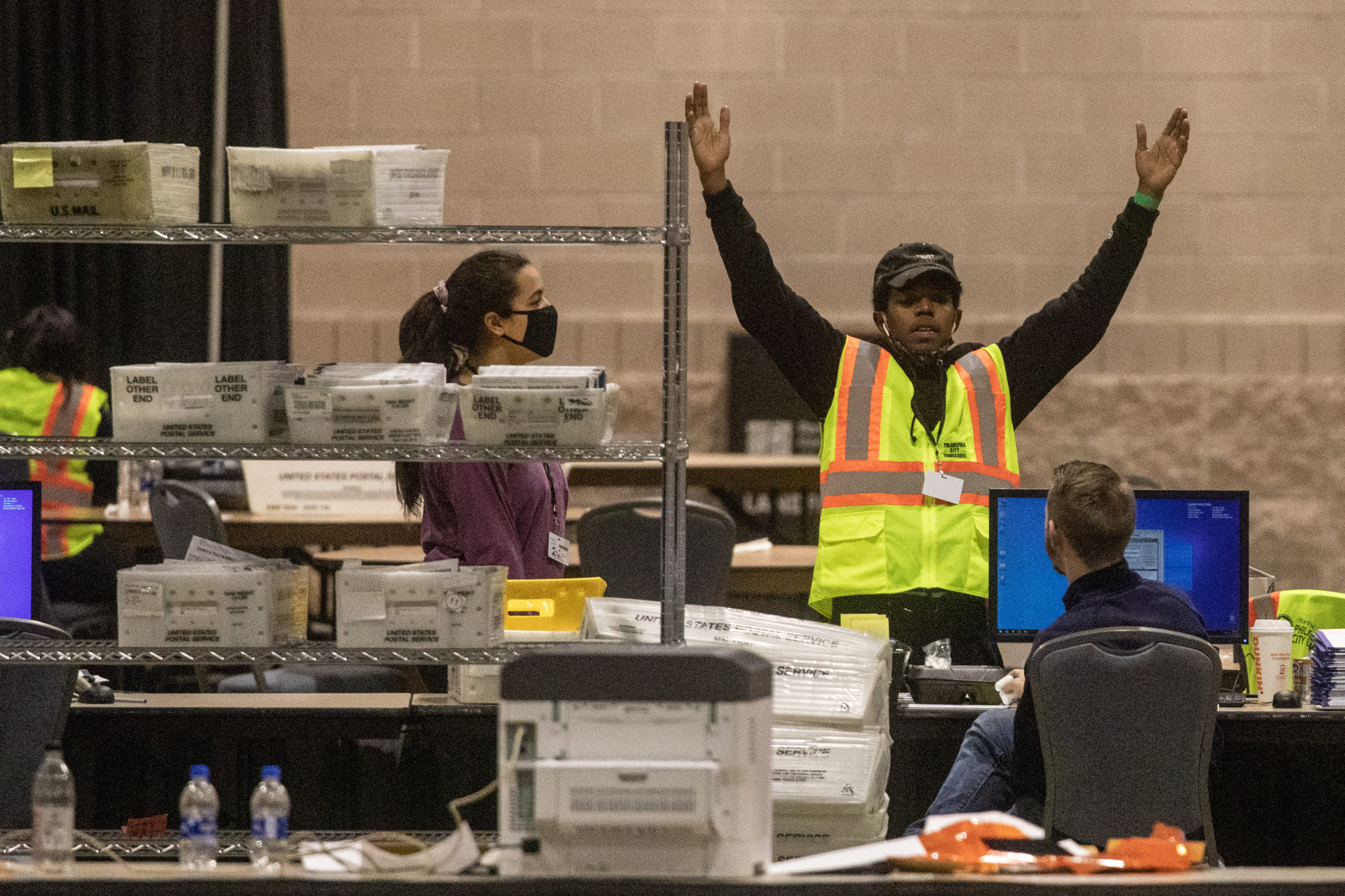 PHILADELPHIA, PENNSYLVANIA – NOVEMBER 06: An election worker talks with a colleague during ballot counting at the Philadelphia Convention Center on November 06, 2020. (Photo by Chris McGrath/Getty Images)

According to state law, the loser of the state’s tally can request a recount within three business days of the count being certified. Unlike other battlegrounds, however, the requesting campaign must put down a deposit to cover the recount’s estimated cost. (RELATED: ‘Show Us The Evidence’: Chris Christie, Pat Toomey, Cast Doubt On Trump’s Claims Of Voter Fraud)

If the recount changes the state’s outcome, the deposit is returned, but if not, then it is used to pay for the operating expenses.

State law requires a recount in Arizona if the margin between the top two candidates is within 0.1%.

Arizona Secretary of State Katie Hobbs told ABC News Thursday that she did not think a recount would occur, saying that while the state’s “margins are very narrow, I don’t think we’re going to get into that territory.”

Any candidate can request a recount in the Badger State if the final margin is within 1%, according to state law, and the request must be submitted within one business day of the results being certified.

Most outlets have already called the race for Biden, who leads by approximately 20,500 votes, 49.4% to 48.8%. Immediately after the call, the Trump campaign signaled that it would request a recount in the state.

Unlike other states, Michigan requires a recount to be conducted, but only if the final vote margin is within 2,000 votes, according to state law. The only way a candidate can formally petition a recount is if they allege that fraud or a mistake occurred in tallying the votes, and “would have had a reasonable chance of winning the election.” (RELATED: John James Refuses To Concede In Michigan)

A petition must be submitted within two days of the vote being certified.