As the 245th Birthday of the United States Marine Corps comes upon us, I was thinking about why annual November 10 birthday celebrations and simply being a Marine are so important to those of us who have worn the eagle, globe, and anchor. Some might say it has much to do with what it takes to become a Marine. Perhaps. But I would argue it has less to do with boot camp or officer candidate school rites of passage – which really have more to do with determining a recruit or candidate’s suitability to be a Marine – and everything to do with post-boot experiences, shared hardships, and an unusual stretch of time in our lives, whether four years or 40, that largely define who we are and will forever be.

That’s also why the cultural degradation of the Corps since 2008 is so disheartening to Marines, especially for those of us in the ever-prized Infantry military occupational specialties. I won’t get into all of that today except to say it is what it is, and that the reputation as being collectively “a few good men” has always been the lifeblood of the Corps.

For us it has never been about big budgets, high-tech toys, and big-ticket items like tanks and ships or even airplanes really (though we have spent quite a lot of our tiny budget on aircraft and pioneering the use of military aviation in support of ground forces over the decades).

For Marines, it has always been about being part of the most elite combined-arms expeditionary force in the world, being a Rifleman, being something with enormous tradition, and being all of these things with few resources.

Someone once said all it takes is a rifle, a bucket, a brush, and a drill field to make a Marine. And there is some truth to that. For as long as there are men with rifles, drill instructors, a place to train, and enemies to fight; there can be Marines. And as long as there are Marines, especially of the Old Corps caliber, there will always be something truly unique within America’s broader military establishment. Not that there aren’t other unique elements within the American military establishment: There are. But not exactly like Marines where culture, reputation, and the legacy of the leatherneck are everything.

So this morning as I penned these words, I considered my own time in the Corps, and how the most rewarding job I’ve ever had in all my 61 years so far has been that of a U.S. Marine rifle squad leader. Of course, I had other jobs in the Corps, and a few since, but nothing nearly as life-defining: Being a young man and having the responsibility of leading young Marines changed everything for me. I’ve also considered the fact that no matter how many years a Marine spends in the Corps, his experiences in the Corps are, well, remarkably special and unlike anything else.

Take for example, USMC Maj. Gen. (Ret.) Jim Livingston, recipient of the Medal of Honor. Gen. Livingston’s story is the stuff of legend. He’s a proverbial superman. But then I realized, so – in many ways – is every other Marine I’ve known throughout my life who has ever humped a pack and a rifle.

And I’ve known many, like my close friend and fellow Marine, Col. (Ret.) Steve Vitali, one of the kindest, gentlest, most unassuming, always-smiling, seemingly regular guys I know. He adores his wife and daughter. Loves his grandson. Takes care of his buddies. Spends frequent quality time with his 92-year-old dad, and he regularly attends church. 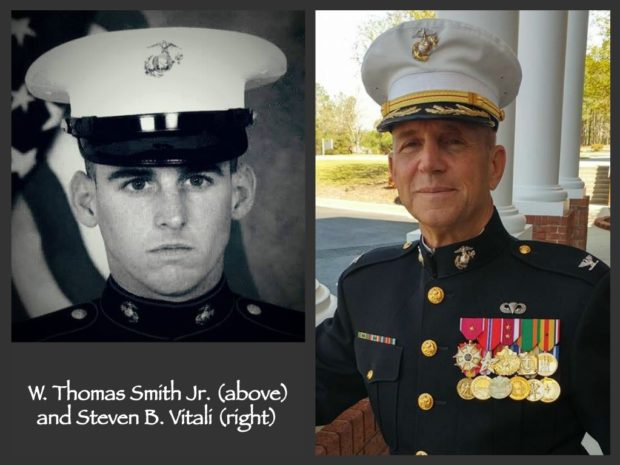 Vitali is also one of the most dangerous combatant leaders on the planet. But who would know? A member of the South Carolina Black Belt Hall of Fame and a veteran commander of the wars in Iraq and Afghanistan, Vitali was on the ground in Afghanistan for several months in 2006 as the ranking U.S. military advisor, and he had been there for less than a week when he was faced with a citywide uprising in Kabul, the capital of Afghanistan then with a population of more than three-million people.

“War waits for no one,” said Vitali. “Four days after my arrival and assumption of the 201st Regional Command Advisory Group in Afghanistan, a U.S. military convoy came down a steep street and lost control. Afghan locals were killed which resulted in angry mobs and riots exploding in the streets. There were shootings, burnings, and chaos everywhere; and the Afghan police were forcefully driven out of the capital.”

With few resources, a struggling Afghan army with a marginally prepared officer corps (and a virtually non-existent senior staff NCO corps), three Afghan brigades – one of which was deployed deep in the Korengal mountains, another being a headquarters brigade – and a handful of U.S. Marines and Army soldiers, Vitali decided to declare martial law on Kabul.

“I had to persuade the Afghan general that was what we must do,” he said. “And I explained that we needed to do so deftly – like a teapot – where we take the pressure off Kabul without inflicting more casualties. There were so many variables at play, including tribal issues. My job was like being the conductor of a disparate symphony.”

The Afghan commander agreed to Vitali’s plan, and together he and Vitali took one of the three Afghan brigades and surrounded the city. They then pulled elements from a second brigade and deployed them to strategic points throughout the city. Within three days, order was restored.

A few months later, Vitali was aboard an Army Black Hawk helicopter ferrying an Army general-officer to a remote outpost in the Hindu Kush mountains.

The Black Hawk developed engine problems trying to navigate over the steep mountains which were near the aircraft’s altitude limits. The helicopter autorotated to the ground and hit hard. Everyone was rattled, but survived and quickly disembarked, pulling the door-mounted machineguns from the aircraft and immediately setting up a 360-degree security perimeter.

Vitali was in command. Another helicopter landed and whisked the general to safety. Vitali remained and directed a third helicopter to land so his sergeant major, who was aboard the third helo and armed with an M203 grenade launcher, could rush to the aid of the men on the ground and reinforce their position as a group of villagers approached.

Vitali then got up and left the perimeter alone, walked up to the villagers and persuaded them to turn back. About 45 minutes later, Vitali and his men were rescued by French special operations forces in “dune buggies.”

The stuff of James Bond? Hardly. “It’s just another day in our Marine Corps,” said Vitali.

There’s also another story, not told by Vitali, but by a Marine chief warrant officer who remembers “Col. Vitali standing atop a cliff and shouting” at the Taliban to “Come and fight me!”

Fact is, every Marine has a great story or multiple great stories which always involve others and contribute to the overall legacy of the Corps. And, yes, it is all about the Corps.

“Marines are different,” Vitali said. “When we engage the enemy – or really anything we do in life – we carry with us 245-years of legacy that we know we cannot tarnish. It would be better to die than to sully or stain that legacy. Legacy and tradition are everything to a Marine. And that fierce devotion to legacy and tradition are why outsiders and, unfortunately, many on Capitol Hill will never understand who we are.”

That “fierce devotion” Vitali speaks of is also why Marines will remain Marines for the rest of their (our) lives.