Amid a spike in homicides, the Los Angeles Police Department is set to downsize its homicide and robbery division and will stop responding to traffic collisions, according to CBSN Los Angeles.

Due to budgetary challenges, more than 200 LAPD officers will be moved back to patrol under a “broad reorganization aimed at preserving patrol and community engagement functions,” according to the Los Angeles Times. Under the plan, anyone with minor injuries from car accidents and hit-and-run crashes will need to file a report online.

The LAPD will soon downsize its specialized units and stop responding in person to traffic collisions and other minor incidents as part of a broad reorganization aimed at preserving patrol and community engagement amid a $150 million budget cut.https://t.co/DER7bhWJvK

In June, following protests and riots that erupted across the country over the death of George Floyd, the Los Angeles City Council moved toward defunding the LAPD, voting to cut the department’s budget by up to $150 million, according to CBS. 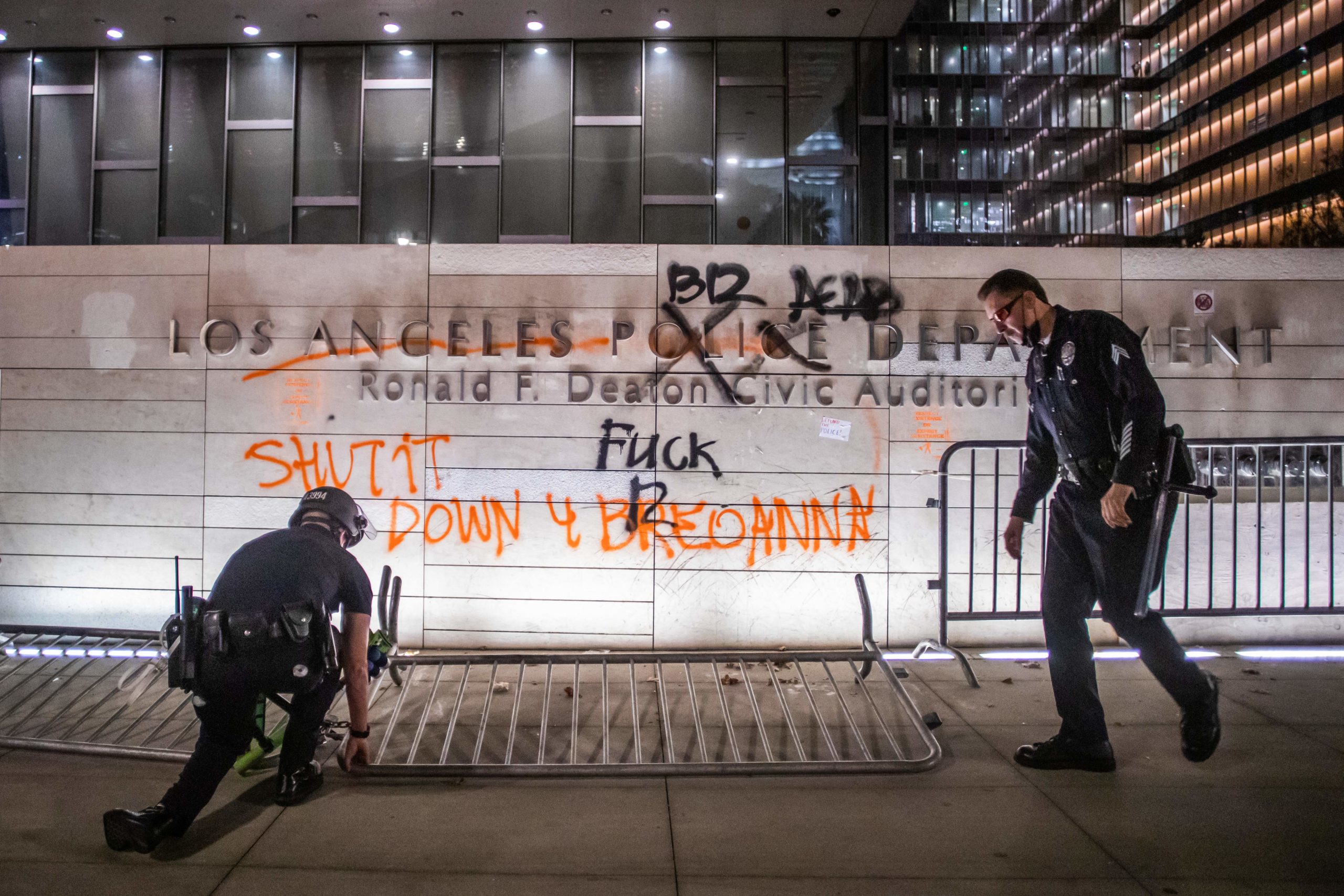 Police officer place barriers in fron of a Police Department building vandalized in a protest against police brutality in Los Angeles on September 23, 2020, following a decision on the Breonna Taylor case in Louisville, Kentucky. – (Photo by APU GOMES/AFP via Getty Images)

The plan also cuts 350 sworn positions and will reduce the LAPD ranks down to 9,700 by April. Currently, the department has 10,100 sworn officers, according to the LA Times.

LAPD Chief Michel Moore told the LA Times that the department would also cut its air support, robbery, homicide, and gang and narcotics units in response to the City Council decision to slash the budget. Civilian employees will also be lost.

Los Angeles, like numerous other large cities across the country, has experienced surging crime. By mid-October, the city had 261 homicides, a 25% increase from the same time of 2019, LAPD Capt. Ahmad Zarekani said, according to NBC Los Angeles.

LAPD Police Chief Michel Moore told the LA Times in late October that the city could see more than 300 homicides in 2020, a level not reached since 2009, when there were 312 killings. Moore called the pace of violence in 2020 a “terrible loss” and an “erosion” of progress that had been made reducing gun violence in the city in recent years. (RELATED: Report: Police Chief Predicts Highest Level Of Homicides In Los Angeles In More Than 10 Years)

Since the 1980s and 1990s, when Los Angeles had more than 1,000 killings some years, there was reportedly a downward trend in homicides. But in 2020, homicides surged in the summer in South L.A. and in parts of Central L.A., according to the Los Angeles Times. In South L.A., homicides were up by 50% from 2019.

Nonfatal shootings have also reportedly increased. The number of victims of nonfatal shootings was up more than 21% as of Oct. 10, the LA Times reported. Moore said a variety of factors related to the pandemic helped drive the violence in L.A.