Rioters in Portland busted windows of a local Democratic office and graffitied the building during a mass Sunday gathering, authorities said.

The mob marched toward the Multnomah Democrats field office after starting a local park, according to a press release from the Portland Police Bureau (PPB). Violent demonstrators broke multiple windows and defaced the building with the phrases “BLM” and “ACAB,” which stands for “all cops are bastards,” photos uploaded by the department showed. 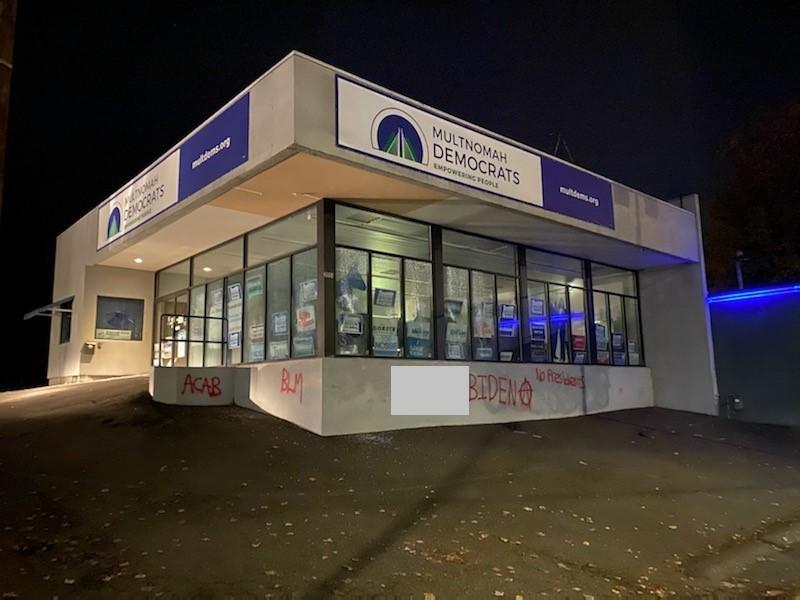 “Biden” was also tagged onto the building next to a symbol that represents anarchy, and the vandalism was accompanied by what appeared to be a statement that read “No Presidents,” the photographs revealed.

Officers arrived at the scene after much of the group fled and made a total of three arrests, the department wrote. Those that were apprehended ranged in age from 22 to 33 and were charged with criminal mischief and escape, according to the release. (RELATED: Portland Rioters Hurl Massive Molotov Into Crowd Of Officers, Light Police Precinct On Fire)

The total number of participants in the mob was not disclosed by PPB and a motive for the vandalism was not immediately released.