Until December 2019 the only options for a rimfire “Glock” were either a conversion unit that mates a rimfire slide and barrel assembly to a stock Glock center-fire frame or one of the .22 pistols on the market from other manufacturers with a vaguely similar profile. But that all changed with Glock’s introduction of the .22 Long Rifle G44.

The external dimensions of the G44 are nearly identical to a Glock 19. One of the only visual indicators that you’re not looking at a center-fire Glock is where the barrel hood lies, which is well below the surface of the ejection port since the pistol is blowback-operated.

Why build a .22 that imitates the size of Glock’s compact 9 mm Luger? Because it’s the most popular handgun that the company makes, and Glock offers identically sized versions in .40 S&W, .357 SIG and .45 GAP.

The G44 mimics the external dimensions of a center-fire Glock, but, internally was designed from the ground up as a .22 Long Rifle—and no, for those who are wondering, the G44 top end will not slip right onto a G19 frame.

Making a functional version of a center-fire semi-automatic handgun in .22 rimfire is no easy task, as components scaled to handle a center-fire cartridge must be lightened significantly to function with .22 Long Rifle. Glock’s primary goal with the G44 was reliability with the wide variation of .22 loads, and it employed several unique design features in order to achieve that goal.

Takedown of the G44 follows that of its center-fire counterparts, and, in typical Glock fashion, reveals a mechanism comprised of relatively few parts.
–

The first is a hybrid slide design—a steel core that includes the rails and breechblock is capped with a polymer cover. The G44 comes in at about 15 ozs., or 9 ozs. less than the 9 mm Luger G19. This weight difference is nearly entirely in the slide, the rimfire version of which is 8 ozs. lighter than its 9 mm counterpart.

The second is a fluted chamber—tiny grooves in the barrel’s chamber allow a small amount of gas to flow around the cartridge case at the moment of firing and “float” it away from the chamber walls for reliable extraction. Common in delayed-blowback center-fire firearms, such as H&K’s roller-delayed family or the French FAMAS, it is rarely seen in a .22 rimfire.

Magazines have the Gen 5 enlarged floorplate. Like all Gen 4 and newer Glocks, the G44 comes with four removable backstraps—two with integral beavertails—to adapt the size of the grip to medium and large sizes. The magazine release is reversible, and the frame features the company’s RTF texturing. 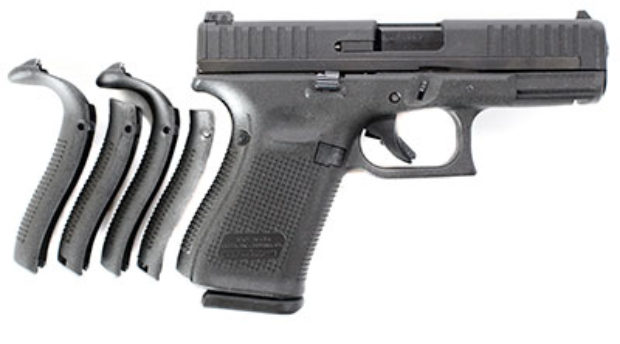 Four interchangeable backstraps—two with and two without extended beavertails—come with the G44, allowing it to be adapted to a variety of hand sizes.
–

The rimfire Glock has a few features that differ from its center-fire siblings. There is a notch in the rear of the barrel hood that serves as a means to visually check to see if there is a cartridge in the chamber. Since the G44 fieldstrips like a traditional Glock, it also served to allow the rimfire firing pin to be safely dry-fired (the first step in disassembling a Glock, after making sure it’s unloaded) without damaging the chamber. The G44’s magazine, while the width of a double-stack, holds a single column of 10 cartridges. A load-assist button on the side makes filling the magazine much easier.

Since the external dimensions are the same, the G44 will fit in standard “small frame” Glock holsters and its magazines in double-stack carriers. Expect center-fire Glock aftermarket accessories that are not chambering-specific, such as triggers and extended controls, to work as well. Glock is offering a threaded barrel for the G44; it is cut with right-hand M9x.75 threads and comes with a 1/2×28 TPI adapter and a thread protector. The barrel has an MSRP of $155.

The G44 is equipped with the same rear sight that Glock installs on its competition models. Screw-adjustable for elevation and windage, it allows for compensation for the variety of .22 Long Rifle loads. It uses the traditional Glock pattern of a white front dot and white U-outline rear.

The Glock Safe Action trigger breaks at 6 lbs., and has the same take-up, break and reset as center-fire Glock pistols we’ve evaluated. Since Glock hypes the “plinking” aspect of the G44 we did our primary accuracy testing with three common “bulk box” .22 ammunitions. Accuracy averaged just under 2.5″ at 25 yds.

So, is the G44 the rimfire omnivore that Glock claims it is? Not quite. Like every rimfire semi-automatic firearm, the weak link is the ammunition. We had several failures to fire, which could be attributed to faulty priming; a second strike at a different point on the rim usually sent them on their way.

There were also a few stovepipes and failures to extract in the several hundred rounds we fired during testing. Reliability was good for a blowback-operated pistol with a fullsize slide and non-fixed barrel, but it is not on par with a center-fire Glock.

Loads with 36-gr. bullets posed a problem in magazines loaded to full capacity. The last two rounds loaded into the magazine would begin to angle with the bullet nose down, behind the magazine’s built-in feed ramp. While they would sometimes function like this, more often than not one of the first two of the flat-nosed, hollow points would catch behind the ramp and jam the pistol. Testing with several brands of ammunition and different magazine loading techniques failed to solve the problem.

The same issue did not occur when loading to full capacity with loads having 40-gr. round-nose bullets. The extra length and round profile of the bullet would allow it to slide up the ramp for smooth feeding, and these loads functioned flawlessly with magazines loaded to full capacity.

So, while the G44 does indeed function very well with a wide variety of ammunition, the best reliability was achieved using 40-gr. round-nose cartridges with velocities of 1100 f.p.s. or greater. The G44 features a standard Glock accessory rail, and when we mounted a 3.2-oz. GTL 22 light/laser combo function was not affected. 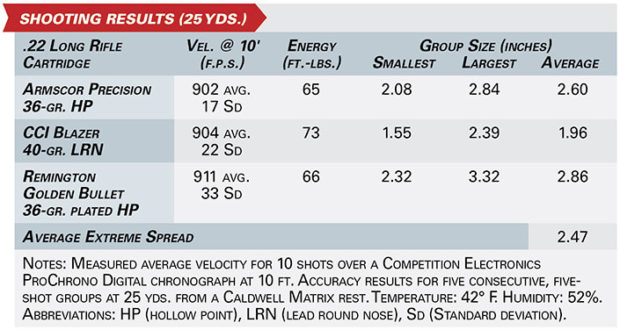 In a sense, the G44 pays for itself, like all rimfire trainers. Expect an out-the-door price from your local gun shop under $400. With .22 Long Rifle ammunition costing about $0.03/round and 9 mm Luger costing $0.20/round, the rimfire Glock breaks even in fewer than 2,500 rounds.

While large enough for adult hands, the G44 is also small enough to be managed by small-statured shooters. Its low weight and light recoil make it ideal for beginning shooters. For those who use a Glock (or any striker-fired handgun) as their primary system for self-defense or competition, the G44 is an ideal training platform. Trigger feel, controls and sights are identical to a center-fire Glock.

Glock’s first foray into the world of rimfires provides shooters with all the physical characteristics we’ve come to expect from the company in a better-than-average rimfire package. 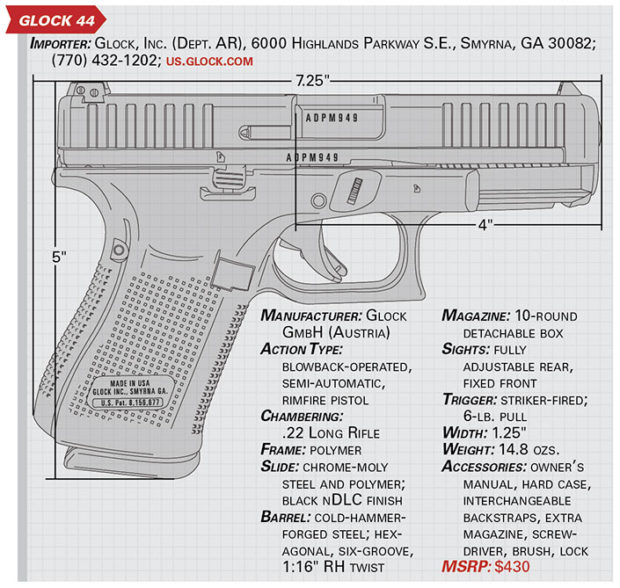