Former U.S. Attorney Alex Acosta shut down an investigation into convicted sex offender Jeffrey Epstein though the FBI was aware that Epstein may have committed crimes outside of Florida, an attorney for Epstein victims told the Daily Caller News Foundation.

“If they knew that there were over 40 young girls who’ve been abused in Palm Beach, I find it incredibly hard to believe they would think that he would then just stop when he left Palm Beach,” attorney Spencer Kuvin told the DCNF.

The Department of Justice released an executive summary of a report from the Office of Professional Responsibility (OPR) Thursday that found “poor judgement” but no “misconduct” in Acosta’s decision to scrap an Epstein investigation through a Sept. 24, 2007 non-prosecution agreement (NPA). Acosta also formerly served as labor secretary in the Trump administration but resigned from his position in 2019 amid scrutiny over his handling of the Epstein case.

The DOJ opened an investigation into how it handled the Epstein deal following an extensive 2018 report by the Miami Herald accusing Acosta of making an “extraordinary” deal with Epstein — the NPA. (RELATED: ‘Disgusting Failure’: Sasse Slams DOJ Investigation Into Epstein’s Sweetheart Deal)

Epstein’s victims and the victims’ attorneys were interviewed as part of the investigation, according to the report summary.

“I know from clients I’ve represented that a couple of the women that the FBI spoke to were very clear about the fact that they had been requested to travel to Mr. Epstein’s home in New York as well as his home in the U.S. Virgin Islands,” Kuvin told the DCNF. “And at least a few of these victims had traveled to those separate locations.”

At the very least, the FBI should have conducted a more broad investigation that would have included Epstein’s other homes in the Virgin Islands, New Mexico, and New York, the attorney told the DCNF.

The best case scenario is that the FBI was “willfully ignorant or just flat ignorant,” Kuvin said. But the worst case scenario, he warned, is that the NPA was the product of conversations between federal officials and Epstein’s lawyers that have not been made public.

Kuvin referred to Acosta’s infamous October 2007 breakfast conversation with Epstein lawyer Jay Lefkowitz. The OPR said in its report that it found no evidence that this breakfast meeting impacted the NPA, which according to the report had been signed weeks earlier. 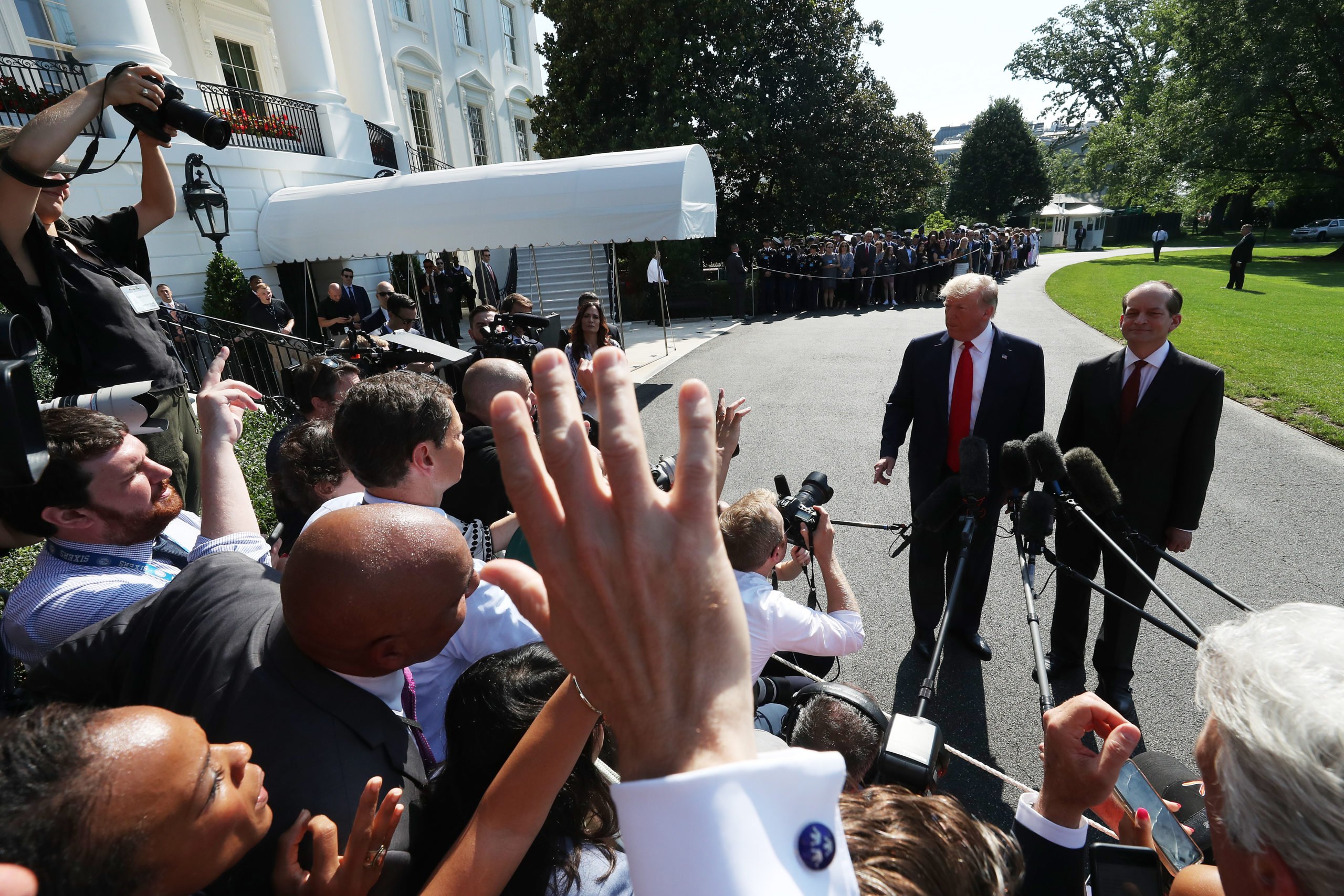 U.S. President Donald Trump stands with Labor Secretary Alex Acosta, who announced his resignation, while talking to the media at the White House on July 12, 2019 in Washington, DC. Acosta has been under fire for his role in the Jeffrey Epstein plea deal over a decade ago when he was a U.S. Attorney in Florida. (Mark Wilson/Getty Images)

“To say that the FBI was ignorant and just didn’t know, doesn’t really hold water,” he added. “They would’ve had to have been so inept to think that this stopped at the gates of Epstein’s Palm Beach mansion.”

Kuvin laid most of the blame on Acosta’s office, saying, “He’s the one who set the tone and tenor for the entire investigation.”

“He’s the one that should have gone to the FBI and said, ‘We need to look into this a little bit further,'” Kuvin said, adding that Acosta should have said, “Wait a minute. You mean to tell me he’s got a house in New York, a mansion up there, he’s got an Island, a private Island down in the Bahamas. And that we have a couple of witnesses who have said that they’ve traveled to those locations? We need to expand out and look at those locations.”

“The indictment alleged that from 2002 until 2005, Epstein created a vast network of underage victims in both New York and Florida whom he sexually abused and exploited,” the report said. “In arguing for Epstein’s pretrial detention, prosecutors asserted that agents searching Epstein’s Manhattan residence found thousands of photos of nude and half-nude females, including at least one believed to be a minor.”

Acosta participated in both the drafting and the approval of the NPA and “accepted responsibility for it,” according to the summary of the report. The summary blames Acosta for the NPA and the actions of those who implemented the NPA, specifically for failing to notify victims of the agreement.

“Best case scenario for Mr. Acosta, he was awful at what he did for a living and he knew he was on the way out,” Kuvin said. “So he just didn’t care. I mean, that’s clear from the OPR investigation is that he clearly didn’t do what he should have done. And he was negligent in his handling of this case.”

“Absolute worst case scenario, maybe he wasn’t inept,” Kuvin added. “Maybe there was some type of nefarious motive that we just will never know. Obviously when they interviewed him, he wanted to cover his rear. And the only thing that the OPR could do is talk to people. So if people aren’t willing to tell the full story and they didn’t put anything in writing and emails or otherwise there’s no way to know.”

The FBI and the DOJ did not immediately respond to Friday requests for comment from the DCNF.

Epstein died of apparent suicide in a federal jail in New York City in 2019 at the age of 66. His longtime companion Ghislaine Maxwell, who has been accused of involvement in Epstein’s crimes against young women, was arrested by the FBI in July.