A transgender professor at the University of California at Berkeley urged followers Saturday to steal and burn a book detailing an investigation into transgenderism trends.

“Since some ppl have misunderstood my tone, and censorship is an important matter and as a public educator I have a duty to be precise, let me clarify,” Berkeley associate professor Grace Lavery tweeted Saturday. “I do NOT advocate defacing library books. I DO encourage followers to steal Abigail Shrier’s book and burn it on a pyre.”

“Plz make sure you use a safe pyre, and that you have an extinguisher to hand,” Lavery continued. “Be safe, when you are burning books. Remember: all you’re doing is removing a commodity from circulation—much as one might destroy a contaminated crop, or take action if a distributor failed to do so.” (RELATED: Target Reverses Decision To Remove Book Critical Of Transgenderism After Receiving Complaint That It’s ‘Transphobic’) 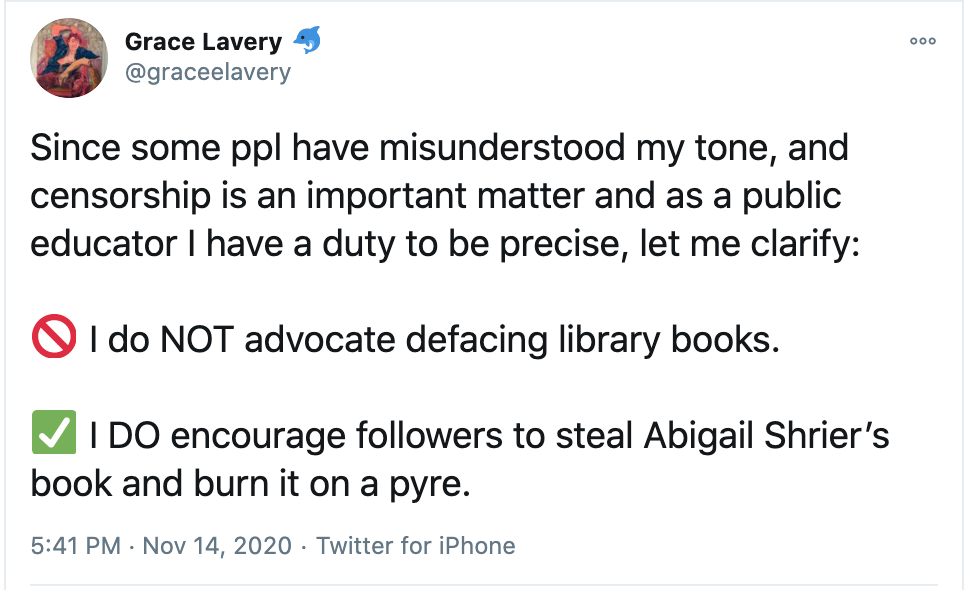 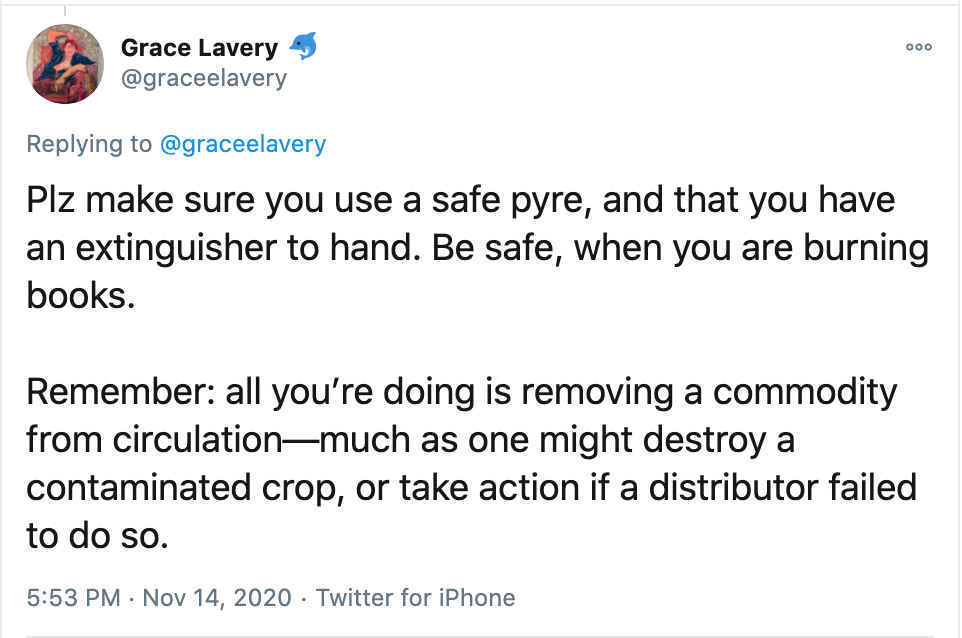 Lavery said in a later tweet that the tweets were jokes but added that “the sort of moral panic that book burning elicits, despite never happening, is weird.”

“I don’t think books are a special type of commodity,” Lavery added. “For example: the idea of burning a laptop doesn’t seem to elicit the same moral horror. but it’s the same principle—disposing of a copy, not the original. The horror seems to derive from the idea that a book represents unalienated labor—but of course, it doesn’t.”

In response to a request for comment, the associate professor referred the Daily Caller News Foundation to a tweet thread explaining the book burning comments.

“If you think I was sincerely encouraging people to burn books, I suggest you look around and see how many books were actually burned,” one of Lavery’s tweets said. “Either my words weren’t taken seriously bc I was misunderstood, or they were meant not to be taken seriously. You can figure this out yourselves.”

The associate professor also called the title of Shrier’s book “fascist,” and said that “the burning of the official texts of the ruling class might well be considered an act of popular liberation.”

Bizarrely, my tweet was indeed censored by Twitter *but only in Germany*—I will be thinking about this for a while. Germany of course carries national laws against Holocaust denial; perhaps they also have laws against promoting book burning. Interesting! pic.twitter.com/EmcIQYuDJC

Abigail Shrier’s book, Irreversible Damage: The Transgender Craze Seducing Our Daughters, has sparked controversy and gained the attention of media pundits such as Joe Rogan since it was published in June. As recently as Friday, Target apologized for removing the book from its shelves after a Twitter user complained that the book was “transphobic.”

“Yesterday, we removed a book from Target.com based on feedback we received,” Target told the Daily Caller Friday. “We want to offer a broad assortment for our guests and are adding this book back to Target.com. We apologize for any confusion.”

The author wrote that she found concerning spikes in transgenderism among teenaged girls who formerly displayed feminine traits and tendencies.

Shrier, who has said on multiple occasions that she is a friend to the transgender community, warned that many young girls are identifying as trans merely out of a desire to find community. The book delves into the effects of social media and trans activists on these young women and their understanding of their own sexuality.

Berkeley did not immediately respond to a request for comment from the DCNF. Shrier was not available to comment for this story.