Secretary of State Mike Pompeo angered Turkish officials during a visit to Istanbul that focused on religious freedom issues and included a meeting with the leader of the world’s Greek Orthodox Christians, the Associated Press reported.

Pompeo met with Ecumenical Patriarch Bartholomew I, the leader of roughly 300 million Orthodox Christians, and the Catholic apostolic nuncio to Turkey, Archbishop Paul Russell, on Tuesday, according to the AP. Pompeo’s visit was intended to emphasize religious freedom in Turkey, which angered Turkish officials who accused the U.S. of having its own human rights issues.

“It would be more advisable for the United States to look in the mirror first and to show the necessary sensitivity to human rights violations such as racism, Islamophobia and hate crimes in its own country,” the Turkey’s foreign ministry said in a statement issued prior to the visit, according to the AP.

Pompeo called Bartholomew I a “key partner” in the effort to champion religious freedom globally.

Honored to meet with His All-Holiness, Ecumenical Patriarch Bartholomew I, and to visit the Patriarchal Church of St. George today. As leader of the Orthodox world, the Ecumenical Patriarchate is a key partner as we continue to champion religious freedom around the globe. pic.twitter.com/1u96nPZwgV

It was a pleasure to meet Archbishop Paul Fitzpatrick Russell, the Apostolic Nuncio to Turkey, Turkmenistan, and Azerbaijan, to discuss how the United States can support interfaith peace efforts in this region. pic.twitter.com/jInbSSeDFs

A Turkish Foreign Ministry official reportedly wouldn’t comment on reports that said Pompeo refused to travel to Ankara for an official visit, according to the AP. The stop in Istanbul is part of Pompeo’s seven-country tour of Europe and the Middle East, and includes visits to Israeli settlements in the West Bank, the United Arab Emirates, Qatar, and Saudi Arabia, according to the Times of Israel.

The visit comes amid tensions between Turkey, a North Atlantic Treaty Organization (NATO) member, and other NATO members in Europe. Greece has clashed with Turkey over rights and resources in the eastern Mediterranean and the two countries have seen rising aggression, according to VOA. 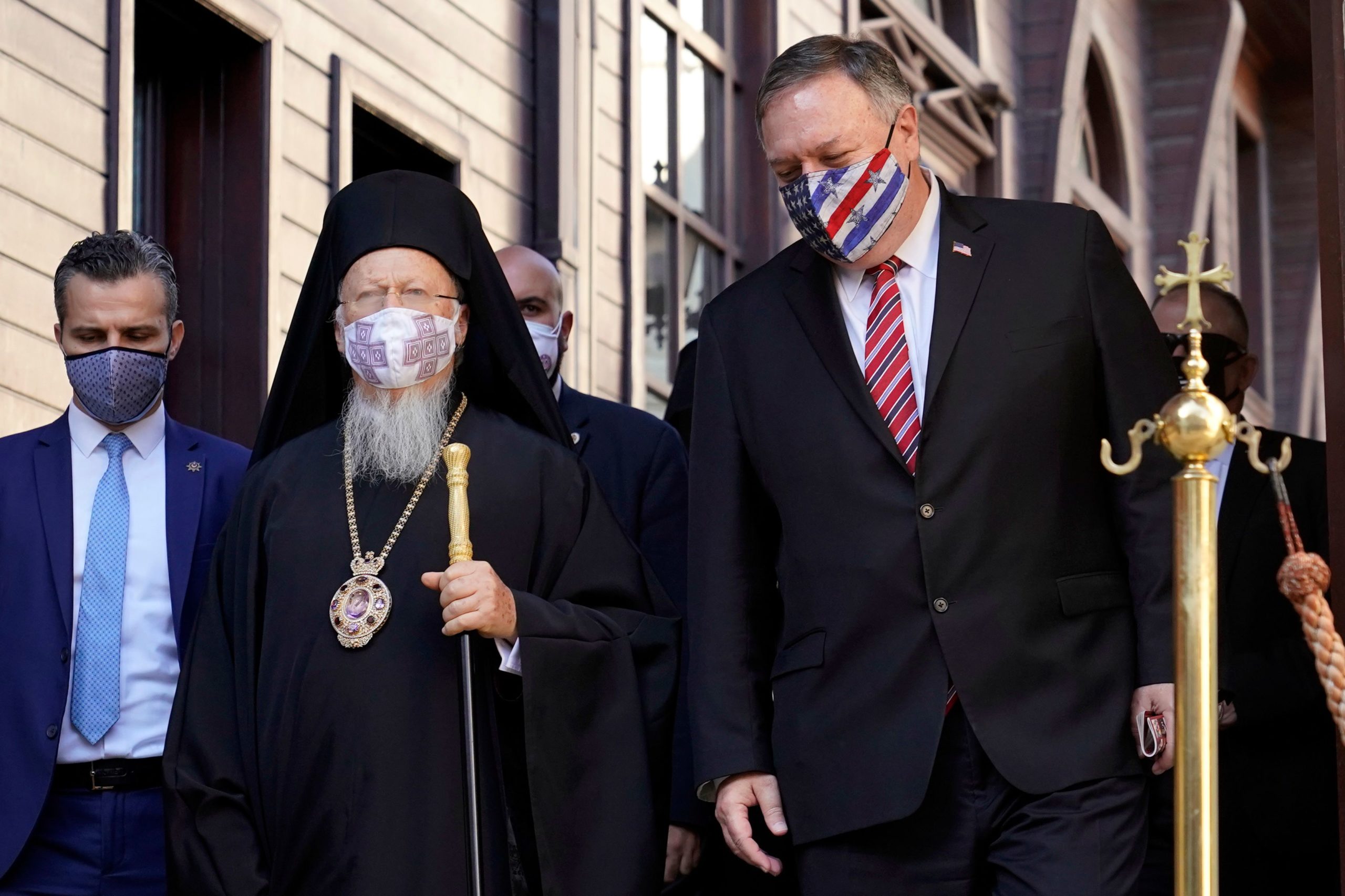 US Secretary of State Mike Pompeo (R) speaks with Ecumenical Patriarch Bartholomew I, the spiritual leader of the world’s Orthodox Christians, before departing the Patriarchal Church of St. George in Istanbul on November 17, 2020. – Pompeo paid a fraught visit to Istanbul that included no official meetings and an agenda focused on religious freedoms that Ankara dismissed as “irrelevant”. (Photo by Patrick Semansky / POOL / AFP) (Photo by PATRICK SEMANSKY/POOL/AFP via Getty Images)

The U.S. also banned Turkey from its F-35 stealth fighter jet program in 2019 after Ankara received a missile defense system from Russia, a growing alliance that has concerned U.S. officials.

Moved by the breathtaking beauty of the Rustem Pasha Mosque. America’s commitment to religious freedom will not waver; all people must be permitted to practice their faith openly and freely, in places of worship like this. pic.twitter.com/eaGusNRqEP

While Turkish officials claim the country protects the rights of citizens of various faiths to worship, human rights advocates and Christians have expressed concern over Erdoğan’s attempts to allegedly erase Christianity from the majority-Muslim nation. 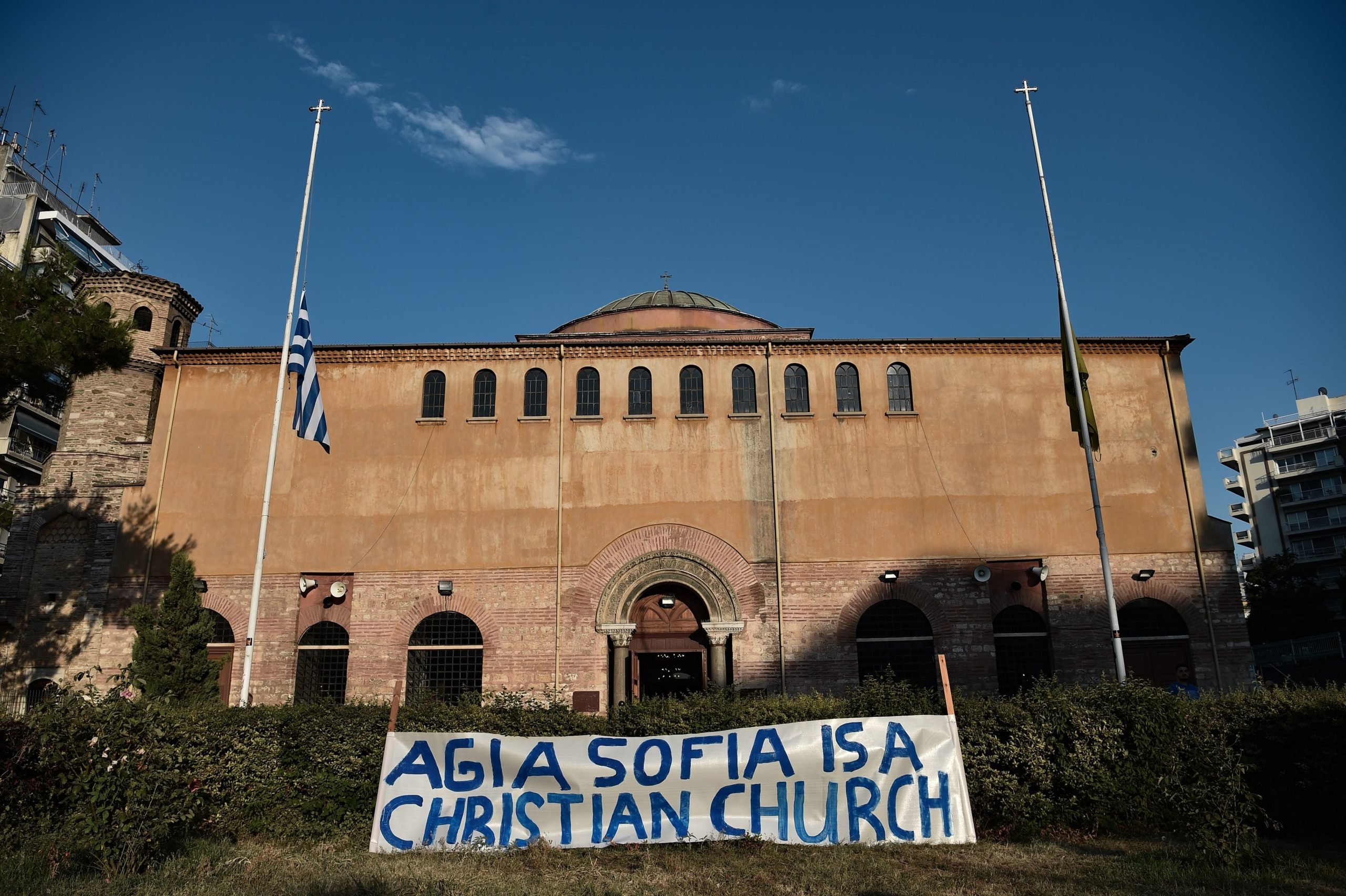 A picture taken on July 24, 2020 shows a banner in front of a church in Thessaloniki during a gathering against turning the historic Hagia Sophia in Istanbul to a mosque after serving for more than 80 years as museum. – (Photo by Sakis MITROLIDIS / AFP) (Photo by SAKIS MITROLIDIS/AFP via Getty Images)

Pompeo had urged Turkey to maintain Hagia Sophia as a museum in order to ensure the building is accessible to all.

“Erdogan and his government have renewed their attempts to erase the rich Christian heritage of Turkey by converting a second historic Istanbul church into a mosque,” said In Defense of Christians, a Washington, D.C.-based advocacy group for persecuted Christians, in a tweet following the conversion of the church in Chora.