Democratic Washington, D.C. Mayor Muriel Bowser said businesses no longer needed to board up in anticipation of the election results but her comments may have been premature as the city saw heightened violence over the weekend during the “Million MAGA March.”

A number of businesses in the nation’s capital began to board up windows and other entrances in late October ahead of potential violence surrounding the election. Bowser’s administration urged businesses to take down materials used to board up in a Nov. 9 statement, arguing there was no credible information of upcoming violence, Fox 5 reported. 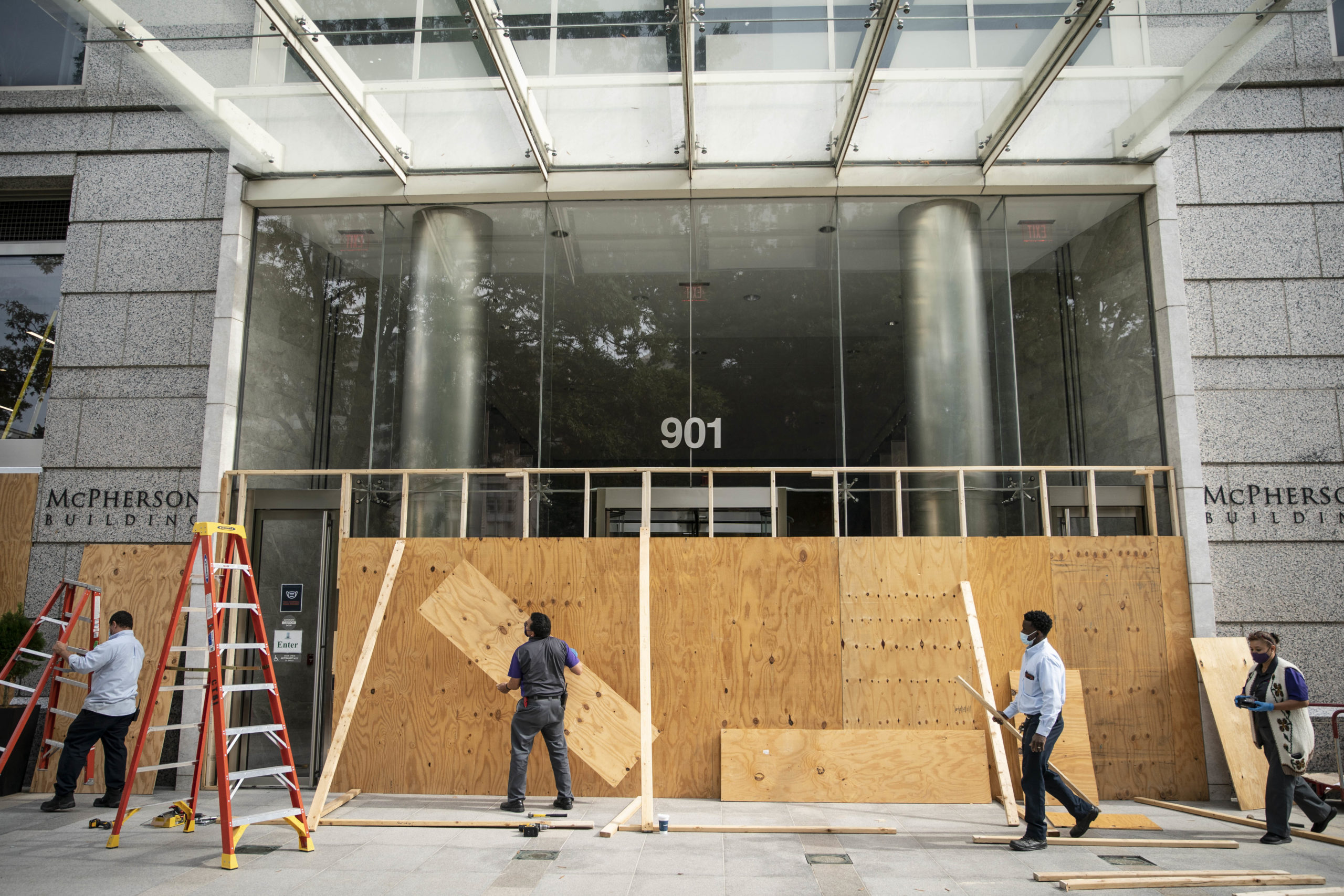 Protective wood boards are placed on the front of the McPherson Building on October 28, 2020 near the White House in Washington, DC. Businesses are preparing for possible demonstrations following next week’s presidential election (Sarah Silbiger/Getty Images)

“Our suggestion and our ask of the businesses is that given our threat environment that they should take down all the boards or cardboard that has been put up there,” said D.C. Homeland Security and Emergency Management Agency Christopher Rodriguez.

The response came just two days after major news networks declared President-Elect Joe Biden the winner of the race. But Bowser told reporters she never wanted businesses to board up in the first place and believed the D.C. police would keep the city safe, according to WJLA.

The mayor’s remarks about public safety may have been untimely given that the city saw escalated violence just days later during the “Million MAGA March” and concurrent counter-protests. (RELATED: Daily Caller Reporters Share What Really Happened At The Million MAGA March)

Thousands of President Donald Trump’s supporters took to the streets in Washington, D.C. over the weekend to contest the election results and stand behind his claims that the election was stolen or rife with fraud. Trump himself made a surprise drive-by visit as the large crowd of supporters marched through the city Saturday. 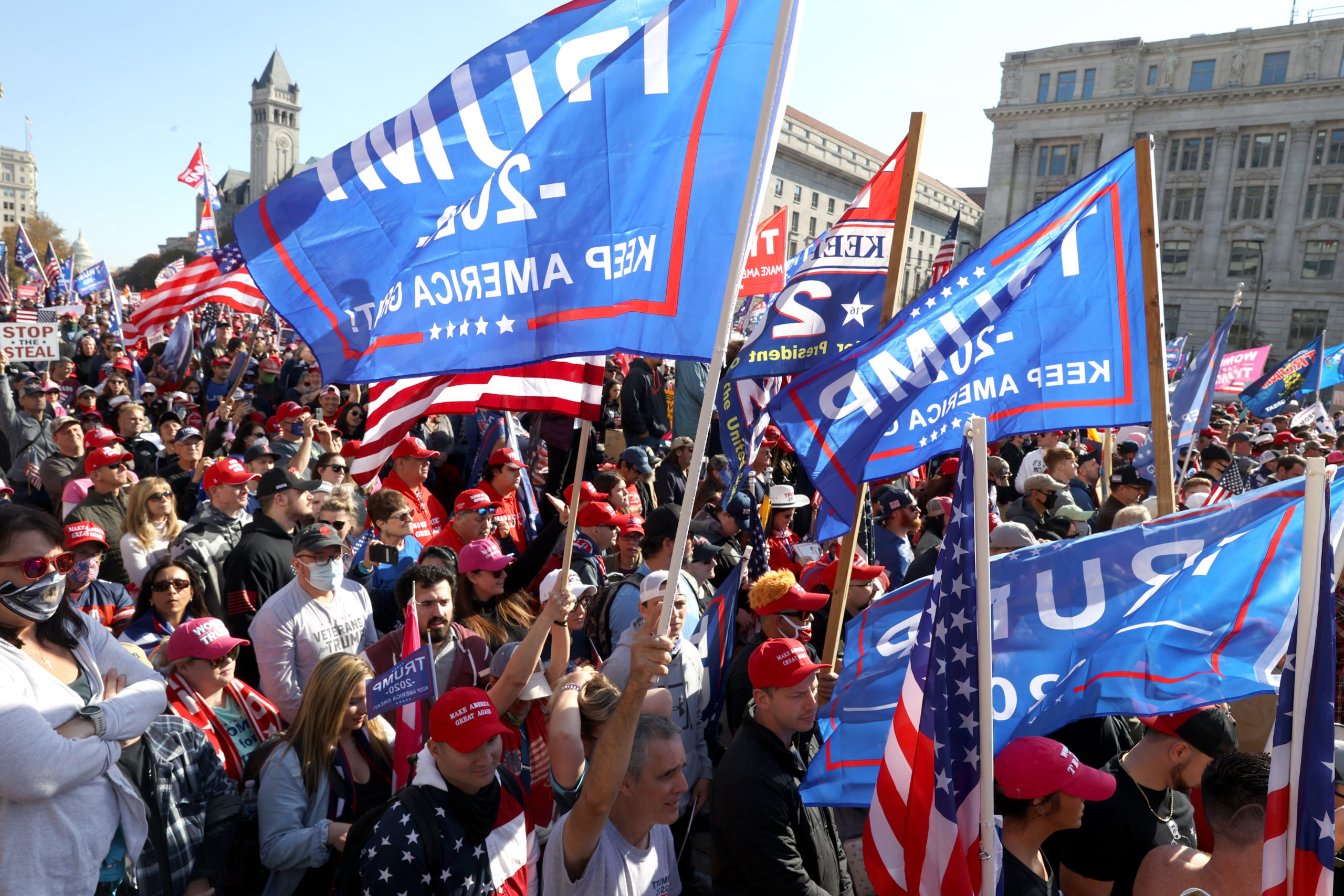 People participate in the “Million MAGA March” from Freedom Plaza to the Supreme Court, on November 14, 2020 in Washington, DC. Supporters of U.S. President Donald Trump marching to protest the outcome of the 2020 presidential election (Tasos Katopodis/Getty Images)

But what was initially a peaceful demonstration spiraled into chaos as counter-protestors targeted attendees and violence broke out in the city. Daily Caller reporters on the ground captured multiple incidents of violence, particularly at “Black Lives Matter Plaza” where Trump supporters were surrounded and attacked by counter-protesters.

Nightfall brought escalated violence as multiple fistfights and one stabbing were reported, according to the Associated Press. Police also arrested at least 20 people and confiscated multiple firearms. D.C. police chief Peter Newsham said the events brought out “the worst” of the country during a Monday press conference, Fox News reported.

It is possible that Bowser’s administration was aware of the threat of violence, which local news outlets reported days before the march took place. The mayor’s comments about boarded up businesses also took place after the “Million MAGA March” was first announced in a Nov. 8 tweet.

Millions of Trump Supporters will be marching from the Supreme Court in Washington D.C. to the White House on Saturday November 14 #MillionMAGAMarch

Follow this account for updates & Info with regard to the upcoming MAGA march in Washington D.C. pic.twitter.com/btYBuS9ASi

Although Newsham claimed that D.C. police prevented conflicts over the weekend, according to Fox News, potentially playing down the threat of violence despite knowing about an impending protest may have undermined the credibility of the mayor’s request that businesses take down boards after the election.

Bowser’s office did not immediately respond to a request for comment from the Daily Caller.