President-elect Joe Biden officially announced his candidacy for president at a local International Brotherhood of Teamsters (IBT) union hall in Pittsburgh, Pennsylvania, in April 2019. In his year and a half of campaigning, Biden laid out his vision for “strengthening worker organizing,” said he would sign the pro-union Protecting the Right to Organize (PRO) Act, promised to create “millions” of new union jobs and visited numerous union headquarters.

“Joe Biden, on the campaign trail, made it very clear that he was a significant supporter of labor unions,” Maxford Nelsen, the director of labor policy at the Freedom Foundation, told the Daily Caller News Foundation. “His campaign platform laid out an aggressively pro-union policy agenda from top to bottom.” 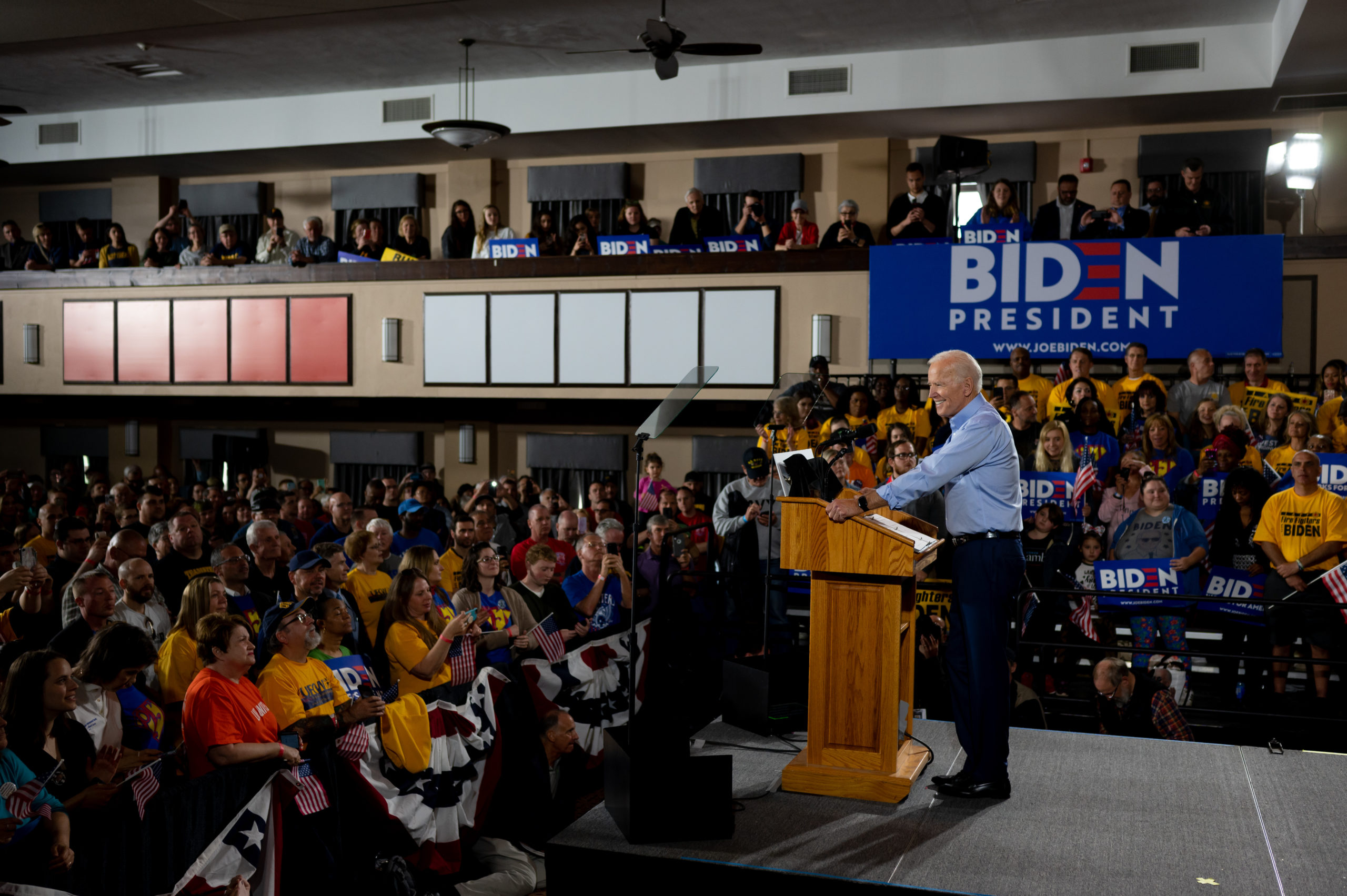 “He said he’s going to be the most pro-worker president we’ve ever seen, and I absolutely believe him,” Trumka recently told NBC News.

Employers should expect the Biden administration to implement policies, which facilitate labor organizing, shorten union elections and reverse key National Labor Relations Board (NLRB) decisions made under the Trump administration, according to The National Law Review. Under Biden, federal law could also begin to classify many freelancers as employees opening these workers up to unionization.

Union membership has been steadily declining for decades with just 10.3% of workers belonging to unions in 2019, according to the Bureau of Labor Statistics. Biden has blamed income inequality on declining union membership. 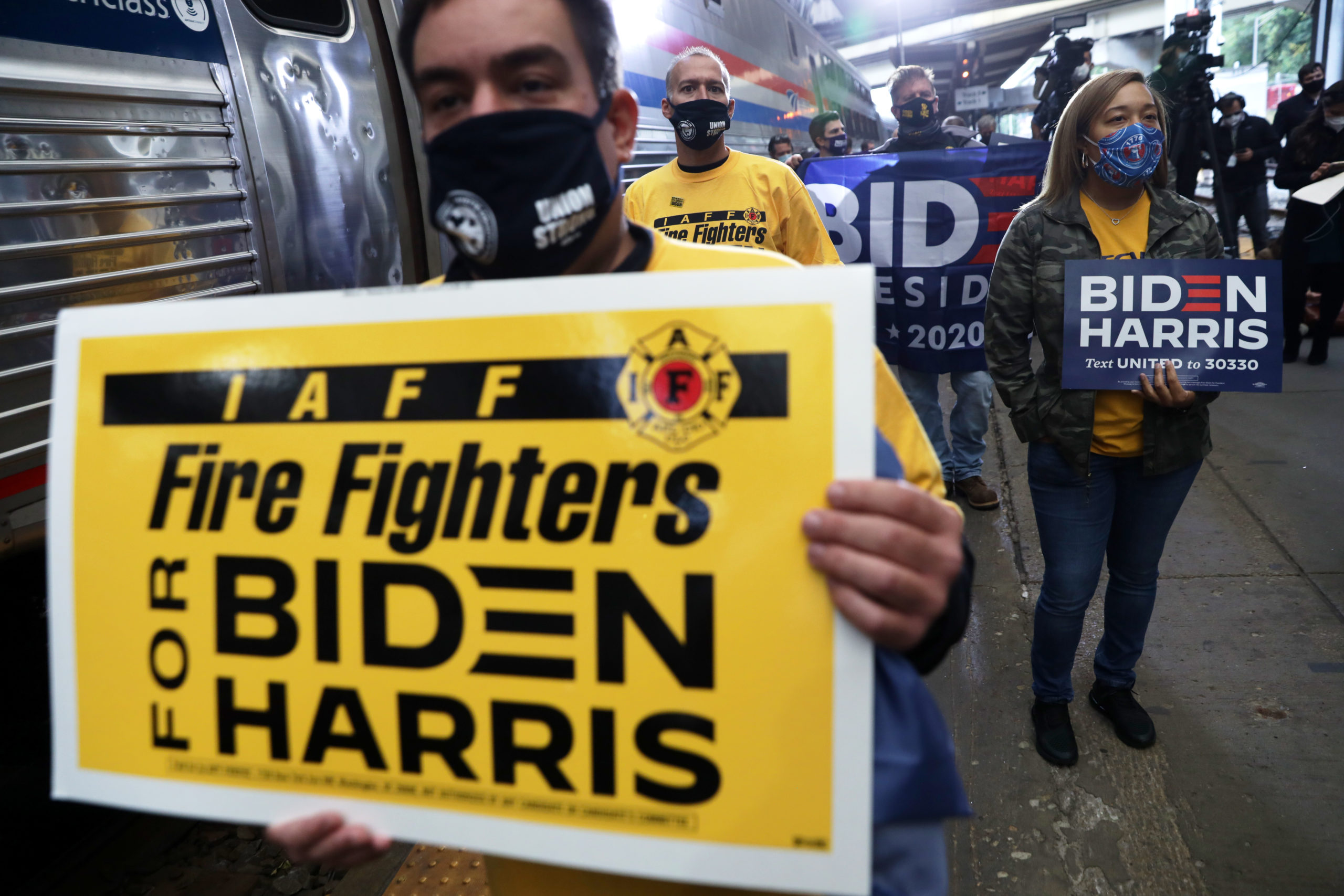 Signing the PRO Act into law, which would overhaul several aspects of existing labor law in the U.S., would likely be the most substantial labor action Biden could take, according to The Wall Street Journal. The legislation was introduced by Democratic leaders in May 2019 and passed in the House mainly along party lines in February, but hasn’t received a vote in the Republican-controlled Senate.

“The PRO Act is not just something Biden has endorsed,” Grover Norquist, president of Americans for Tax Reform, told the DCNF. “The PRO Act is the bill that the labor unions say that they have to have and that Nancy Pelosi made everybody vote on.”

The legislation is a compilation of various policy changes that labor unions support, which would make it easier for unions to organize private-sector employees and minimize employees’ choice in unionization, according to Nelsen. (RELATED: EXCLUSIVE: Trump Administration Sends Rare Warning To Two Major Labor Unions)

The U.S. Chamber of Commerce called the legislation a “litany” of every failed labor policy in the last 30 years.

“One of the most concerning components would be a federal ban on state-passed right-to-work laws,” Nelsen said.

For years, President Trump and Republicans have waged a war on America’s labor unions.

It will end on my watch.

I’ll sign the PRO Act — making it easier for workers to organize and collectively bargain — and be the strongest labor president workers have ever had.

Right-to-work legislation guarantees citizens the ability to choose whether they’d like to join or not join a labor union, according to the National Right to Work Legal Defense Foundation. This type of legislation is fiercely opposed by unions, which they say take rights away from working people.

Such laws exist in 27 states, according to the National Conference of State Legislatures. Nine of those states have adopted amendments, which enshrine right-to-work in their constitution.

“Under the PRO Act, all of those state laws would be overruled and unions in all 50 states could require private-sector employees to pay dues and fees or be fired,” Nelsen said. (RELATED: UAW Abandons Federal Lawsuit Seeking To Overturn Michigan Union Law)

“That is immensely concerning, both on individual liberty grounds and economic competitiveness grounds,” he added.

The Taft-Hartley Act of 1947, which created the NLRB and allowed workers to avoid unionization, specifically did not require workers to unionize as a condition of employment. By signing the PRO Act, Biden would abolish laws in more than half of states and force workers to join unions and pay dues, according to the WSJ.

The PRO Act would also implement the “ABC” test, a series of conditions defining an employee, according to Nelsen. California became the first state to enact an “ABC” test when Democratic Gov. Gavin Newsom signed Assembly Bill 5 into law in 2019, but that test has faced legal challenges and voters passed a proposition on Nov. 3 to exempt app-based gig workers from it.

Uber, Lyft, Doordash and other app-based companies spent hundreds of millions of dollars on the effort to pass the proposition. The proposition exempted the companies from Assembly Bill 5, but would not exempt them from the PRO Act. 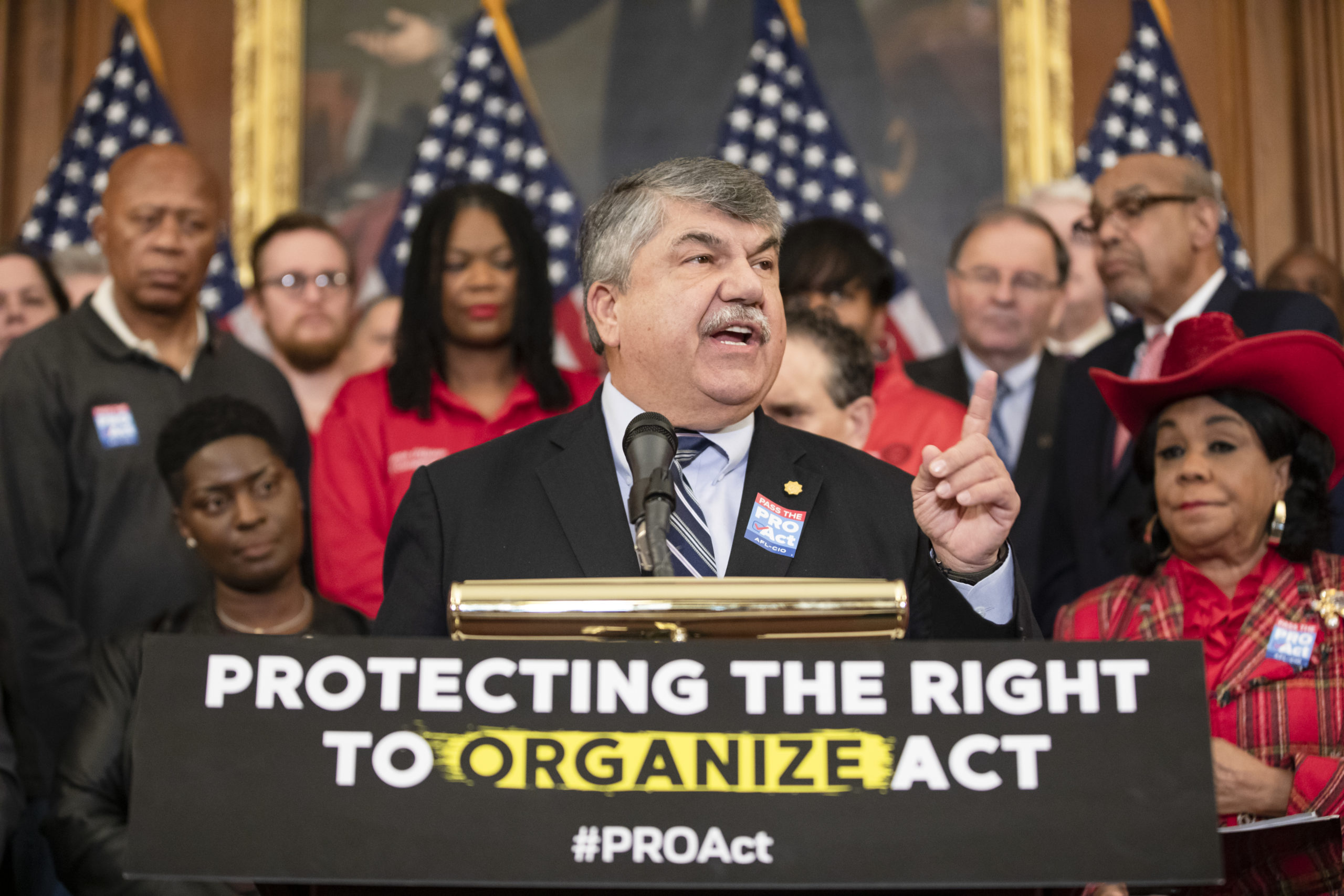 Richard Trumka, president of the AFL-CIO, speaks during a press conference advocating for the passage of the Protecting the Right to Organize Act on Feb. 5 in Washington, D.C. (Samuel Corum/Getty Images)

The test would lead to more workers being classified as employees, opening them up to unionization and union coercion, according to the WSJ.

“Unions have, for many years now, waged a war against independent contractors,” Nelsen told the DCNF. “Unions’ preferred model of employment is for everybody to be in a traditional nine-to-five, 40-hour a week job punching and punching out.”

“That’s the environment that is most conducive to union organizing,” he added. (RELATED: Auto Worker Files Charges Against UAW, Says Union Kept Taking Dues After She Quit Membership)

In an example of how labor unions have benefited from reclassifying independent contractors as freelancers, the Department of Health and Human Services (HHS) issued a final rule that prohibited states from making Medicaid payments to third parties such as unions. The rule was put into place because hundreds of thousands of home care workers, mainly in California, had been unionized and thus portions of their paycheck, which comes from Medicaid, were being directed to unions as a dues fee.

Five states, led by California, sued HHS over the rule, arguing that the bargaining power of home care workers had been hampered, according to Ballotpedia News.  The U.S. District Court of the Northern District of California blocked the rule on Tuesday, siding with the states involved in the lawsuit.

California Attorney General Xavier Becerra said the ruling was a “victory for our state and for the collective bargaining rights of homecare workers.” Becerra has reportedly been floated to potentially head the Department of Justice under Biden, according to Politico.

Home care workers being unionized amounts to a revenue stream of about $150 million per year in dues for unions like the SEIU, according to Nelsen.

When the President attacks unionized healthcare workers, he puts the care of hundreds of thousands of vulnerable Californians at risk. https://t.co/QjPsQttZI2

The PRO Act would also alter the way in which union elections are conducted. The current process would be changed to make it easier for employees to petition to form a union and to disallow employers from forcing workers to attend “anti-union” meetings, according to the Economic Policy Institute.

However, the bill would promote a system of card-check organizing, according to the Competitive Enterprise Institute. Card-checking would mean employees are not provided the opportunity to cast a secret ballot, allowing union representatives to identify who opposed or favored unionization.

Nelsen and Norquist both said this system would allow union leaders to intimidate workers into voting in favor of unionization. (RELATED: AFL-CIO Mired In Internal Power Struggle As Union Leaders Battle Over Who To Endorse For Labor Secretary)

“Under card-check, a union will approach employees one-on-one and try to pressure, coerce and see whatever is necessary to get employees to sign union-authorization cards,” Nelsen said. “And if they can get 50% plus one of the employees in a workplace to sign cards, the union will then submit those cards to the National Labor Relations Board and be certified without any election being conducted.” 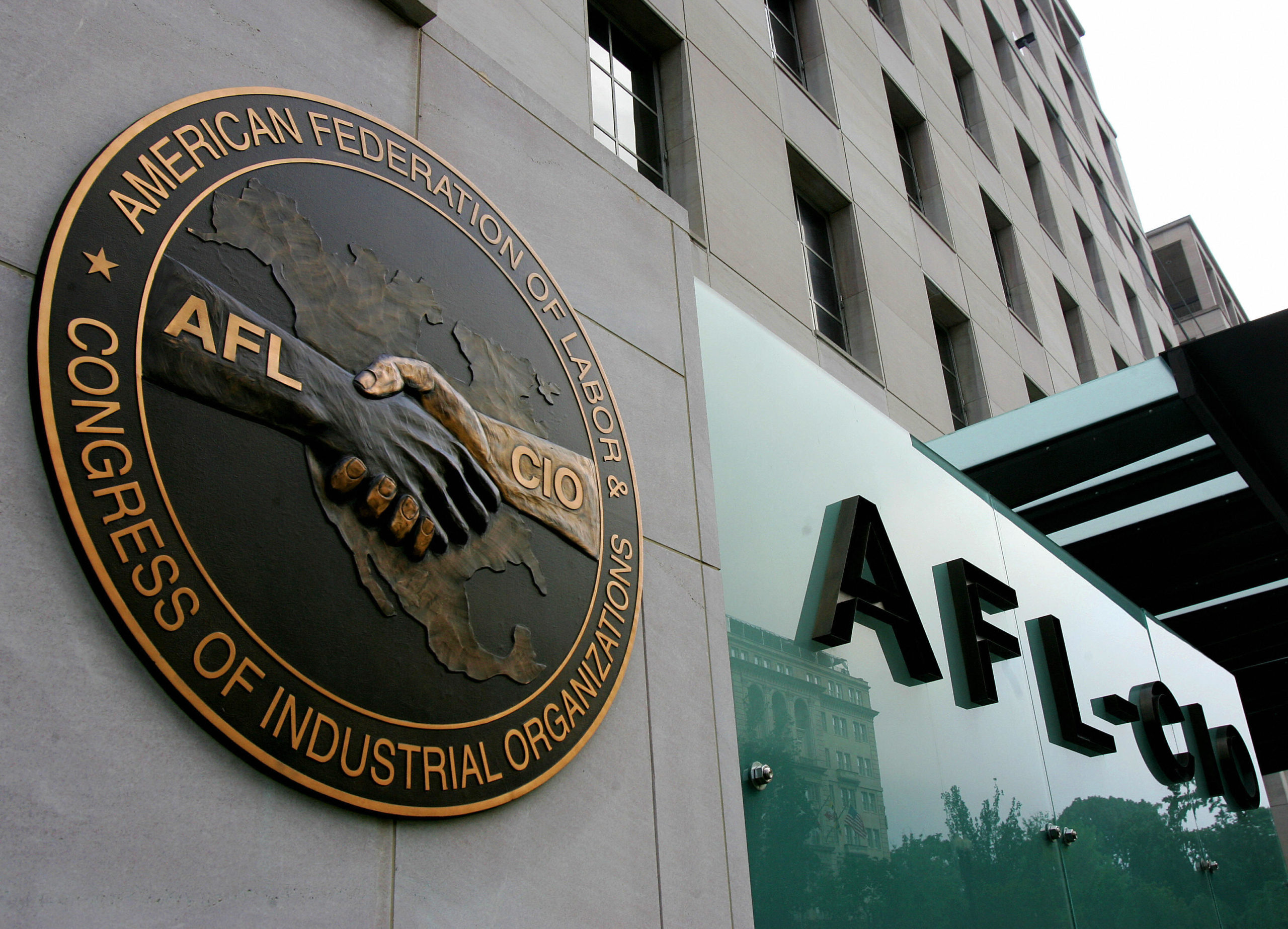 In 2018, the Supreme Court ruled in Janus v. AFSCME that public sector workers nationwide cannot be forced to pay union dues as a condition of employment, according to a Liberty Justice Center report. Since the decision, union membership has declined slightly and unions have seen revenue drop from lost dues, a Manhattan Institute study showed.

“Today’s radical decision by the Supreme Court is a blatant slap in the face for educators, nurses, firefighters, police officers and all public servants who make our communities strong and safe,” former president of the National Education Association Lily Eskelsen García said in a statement following the ruling.

García was joined by several other union leaders who decried the decision. The decision was celebrated by those who thought workers had previously been forced into joining unions and paying dues. (RELATED: California’s Proposition 22 Is The Most Expensive Ballot Measure In State History. The Result Could Affect A Biden Presidency)

“Now that public-sector unions can no longer extract union fees from workers who want nothing to do with them, public unions will have to work harder to provide services that will prompt workers to join their ranks,” a Heritage Foundation report said.

While the Supreme Court decision is the law of the land and cannot be countered by legislation or executive action, there are several ways a Biden administration could curb Janus v. AFSCME. 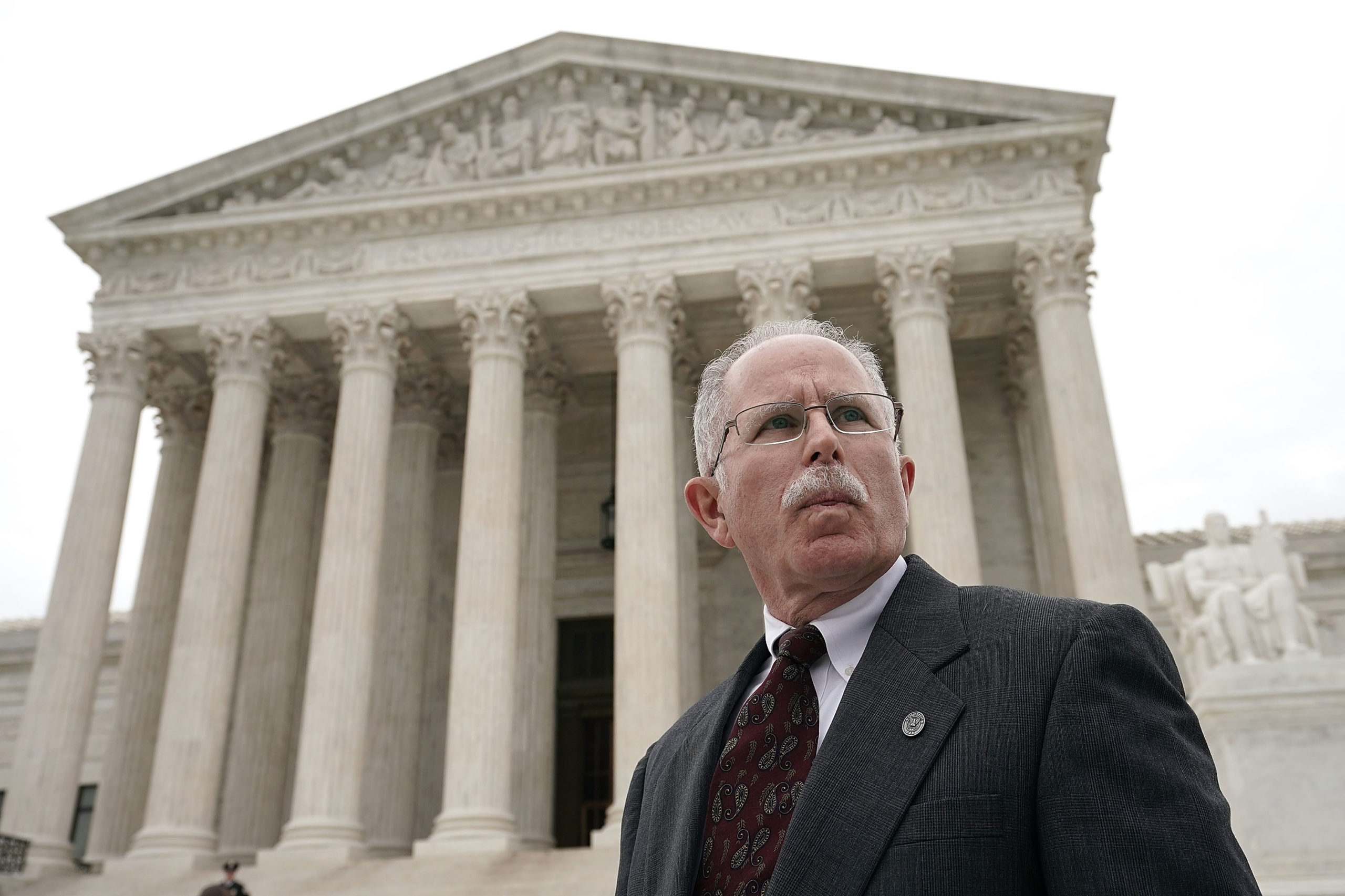 Lead plaintiff in Janus v. AFSCME, Mark Janus passes in front of the Supreme Court after a hearing on Feb. 26, 2018 in Washington, D.C. (Alex Wong/Getty Images)

First, there are cases that are actively being litigated related to questions arising from the 2018 ruling, according to Nelsen. Biden could begin appointing judges to federal courts who are sympathetic to unions, but this would hinge on Democrats winning both of Georgia’s January special elections.

Another way Biden could attempt to counter the effects of Janus v. AFSCME would be by signing the Public Service Freedom to Negotiate Act. Democrats introduced the legislation, which was endorsed by the AFL-CIO and AFSCME, hours after the Supreme Court’s decision.

“The Public Service Freedom to Negotiate Act would set a federal mandate and minimum standards or regulations for how public sector collective bargaining is to take place,” Nelsen said. “The effect would be to increase the pool of potential union members in the public sector quite dramatically.”

He continued: “So if Janus means that not all public employees have to pay union dues, one way to offset the loss of members is to increase the pool of people that you can solicit membership from.” (RELATED: ‘Shocking Level Of Greed’: Top NY Union Leader, 10 Others, Charged In Fraud And Bribery Scheme)

And Norquist said: “You could certainly not enforce Janus as federal law and leave it up to the states and I don’t think Illinois spends a lot of time checking to see if it’s being abused.”