Republican Georgia Sen. Kelly Loeffler is self-quarantining after a positive COVID-19 test, according to a Saturday campaign statement.

Loeffler, currently campaigning to keep her job in a January 5 runoff against Democratic challenger Raphael Warnock, was cleared to attend campaign events with Vice President Mike Pence on Friday after a pair of negative rapid tests, the campaign said. However, a polymerase chain reaction test (PCR) test came back positive, forcing the Georgia senator to take another test Saturday and await the results.

“Senator Loeffler took two COVID tests on Friday morning,” campaign spokesperson Stephen Lawson said in a statement. “Her rapid test results were negative and she was cleared to attend Friday’s events. She was informed later in the evening after public events on Friday that her PCR test came back positive, but she was retested Saturday morning after conferring with medical officials and those results came back inconclusive on Saturday evening.” 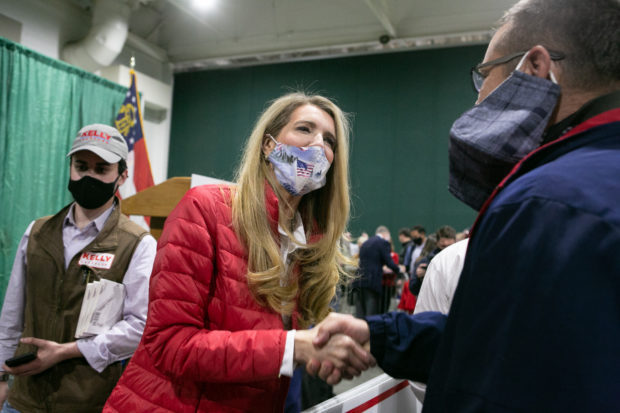 “Senator Loeffler followed CDC guidelines by notifying those with whom she had sustained direct contact while she awaits further test results,” the statement continued. “She has no symptoms and she will continue to follow CDC guidelines by quarantining until retesting is conclusive and an update will be provided at that time.” (RELATED: Raphael Warnock Dodges Question From CNN’s Jake Tapper About Whether He Attended Fidel Castro Speech)

CNN reported that Loeffler went without a mask “most of the day” while participating in campaign events Friday with Pence and Republican Georgia Sen. David Perdue.

Both Loeffler and Perdue failed to garner the necessary 50% of votes required to avoid a runoff against the second-place finisher. The January 5 runoff election will determine which party controls the U.S. Senate. Currently, Republicans hold 50 seats while Democrats control 48.

“Out of an abundance of caution, she will continue to self-isolate and be retested again to hopefully receive consecutive negative test results,” a statement read. “We will share those results as they are made available. She will continue to confer with medical experts and follow CDC guidelines.”