Workers at a recently-built Amazon warehouse in Alabama filed a notice with the National Labor Relations Board to hold a unionization vote.

The notice of a vote to form a union, which was filed on Friday, laid the groundwork for what is likely going to be a bitter battle between workers who favor unionization and Amazon, which has opposed past attempts to unionize its workforce, according to The Washington Post. If successful, the roughly 1,500 workers based in the Bessemer, Alabama facility would be members of the Retail, Wholesale and Department Store Union (RWDSU).

“Having a union at Amazon would give us the right to collectively bargain over our working conditions including items such as safety standards, training, breaks, pay, benefits, and other important issues that would make our workplace better,” a RWDSU website for the effort said. “Amazon sometimes addresses issues at work but it’s all temporary.” (RELATED: European Union Hits Amazon With Antitrust Charges, Alleges Company Uses Data To Gain Unfair Advantage)

It continued: “A union contract is in writing, negotiated upon, and Amazon would need to legally follow the guidelines and there are mechanisms to hold them legally accountable to us as workers. There’s no other way to have this type of relationship with Amazon outside of having a union.” 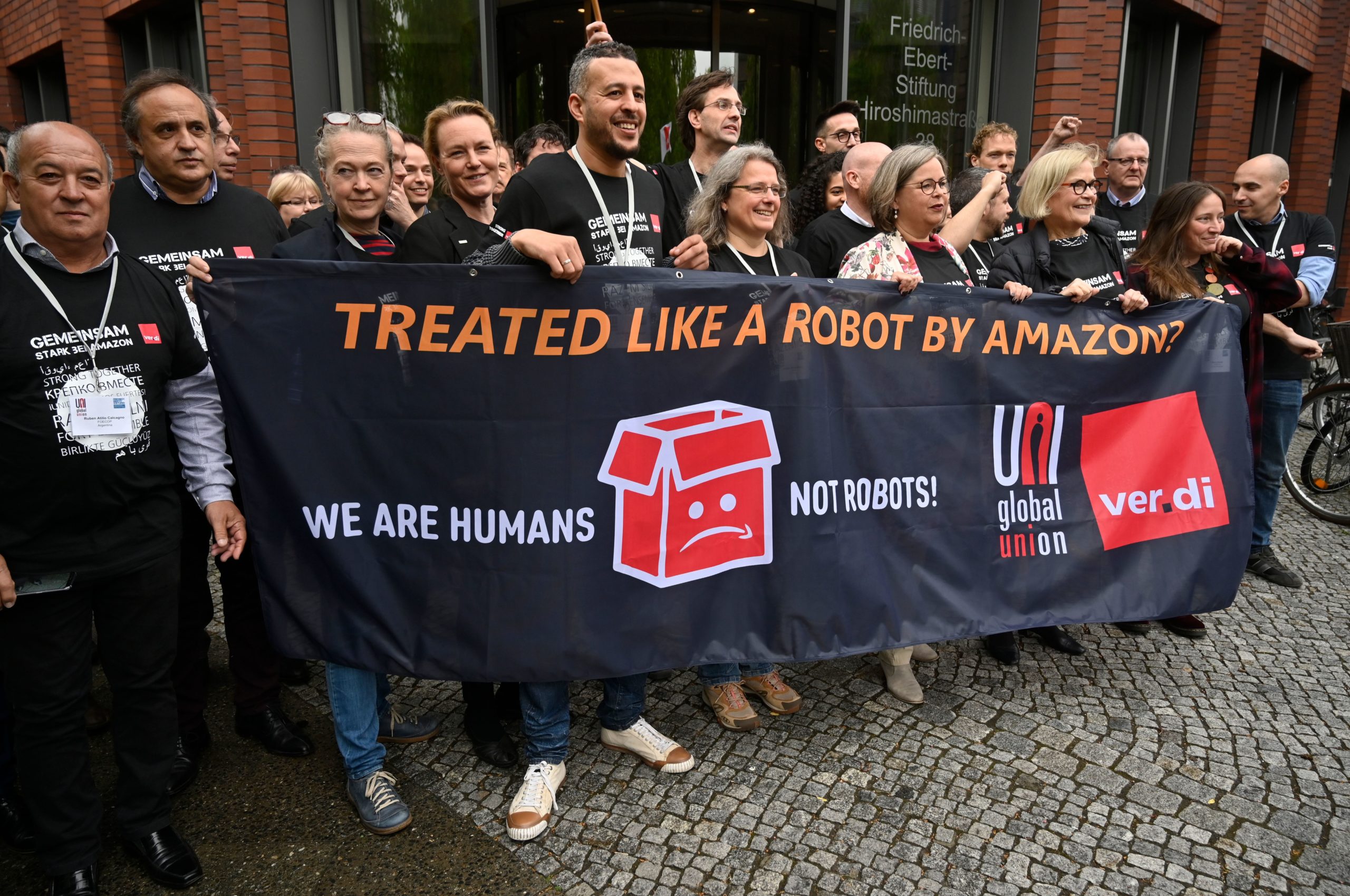 Amazon workers hold a banner reading “We are Humans not robots!” in 2019 in Berlin, Germany. (John MacDougall/AFP via Getty Images)

To trigger a unionization election, at least 30% of the workforce need to sign a petition or cards, according to the National Labor Relations Board (NLRB). The NLRB will then certify a union if a majority of workers vote in favor of it during the election.

“We don’t believe this group represents the majority of our employees’ views,” Amazon spokesperson Lisa Levandowski told The Daily Caller News Foundation in a statement. “Our employees choose to work at Amazon because we offer some of the best jobs available everywhere we hire.”

Amazon has been able to avoid any unionization of its workforce for 25 years, according to GeekWire. In 2000, the company defeated attempts by the Communications Workers of America and the United Food and Commercial Workers Union to unionize thousands of employees, The New York Times reported at the time.

A small group of Amazon workers in Middletown, Delaware voted overwhelmingly against unionization in 2014, according to The Seattle Times.

Meanwhile, Amazon has been actively hostile to unions both in Europe and the U.S., according to the Post. In September, the company removed two job postings seeking individuals who could “monitor labor organizing threats” and in October, Amazon deleted two similar job postings for European roles, according to CNBC.

“All workers are entitled to decent wages and working conditions, which is why I stand with the Amazon warehouse workers in Alabama exercising their constitutional right to form a union,” Democrat Vermont Sen. Bernie Sanders tweeted in support of the Alabama unionization effort. “Mr. Bezos, the wealthiest person in America, must not interfere in this election.”

Amazon announced in October that its workforce surpassed 1 million employees, according to CBS News. The company hired 250,000 workers in the summer amidst the coronavirus pandemic and reported record profit and revenue figures.