A group of rioters in Portland busted multiple windows and defaced storefronts during Thanksgiving Day unrest in the city, according to police.

At least 10 businesses were defaced and attacked by the violent demonstration including grocery stores, banks, an auto service center, a mailing store and several other unspecified retail locations, according to a press release from the Portland Police Bureau (PPB). The phrases “Fuck Ur Thxgiving,” “Land Back” and “You Don’t give aF about Black PPL” were tagged in graffiti and officers noted “thousands of dollars of damage” throughout the night, the department said. 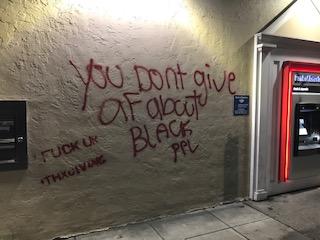 A total of three people ranging in age from 23 to 38 were each charged with ten counts of criminal mischief, and a juvenile was arrested, PPB wrote. One of the arrestees was found with a semi-automatic handgun in his possession, according to the release.

Law enforcement contacted the business owners after and both contractors and employees were called in to board up windows during the violent night, the department wrote. (RELATED: Portland Rioters Hurl Massive Molotov Into Crowd Of Officers, Light Police Precinct On Fire)

Officers determined that more than four people were involved in the vandalism through witness statements, and the investigation is ongoing, according to PPB.