Multiple potential 2024 Republican White House hopefuls have flocked to Georgia, where dual Senate runoffs have proved to be an early trial run for several possible candidates.

In addition to Vice President Mike Pence, Sens. Marco Rubio and Tom Cotton have visited Georgia in recent weeks. Florida Sen. Rick Scott, who is set to lead the National Republican Senatorial Conference, has campaigned in the state as well.

South Carolina Sen. Tim Scott and former Gov. Nikki Haley, two other possible presidential candidates, have also vocally supported Georgia Sens. David Perdue and Kelly Loeffler, though they have not made in-person visits to the state this month.

“Georgia is kind of a twofer right now,” one GOP operative told The Hill. “It’s easy enough to give the excuse that you’re just there trying to protect the Senate majority, but you’re still getting your name and your face out there for if and when you decide to pull the trigger on a campaign.”

The slew of visits from possible GOP candidates is not unexpected. The two January runoffs will decide whether Democrats can climb to 50 seats in the Senate, giving them slim control of the chamber and full control of Congress and the White House as a result. (RELATED: Georgia Senate Runoffs Have SHATTERED Spending Records)

Despite the multiple visits to the Peach State, none of the politicians have announced campaigns for president. 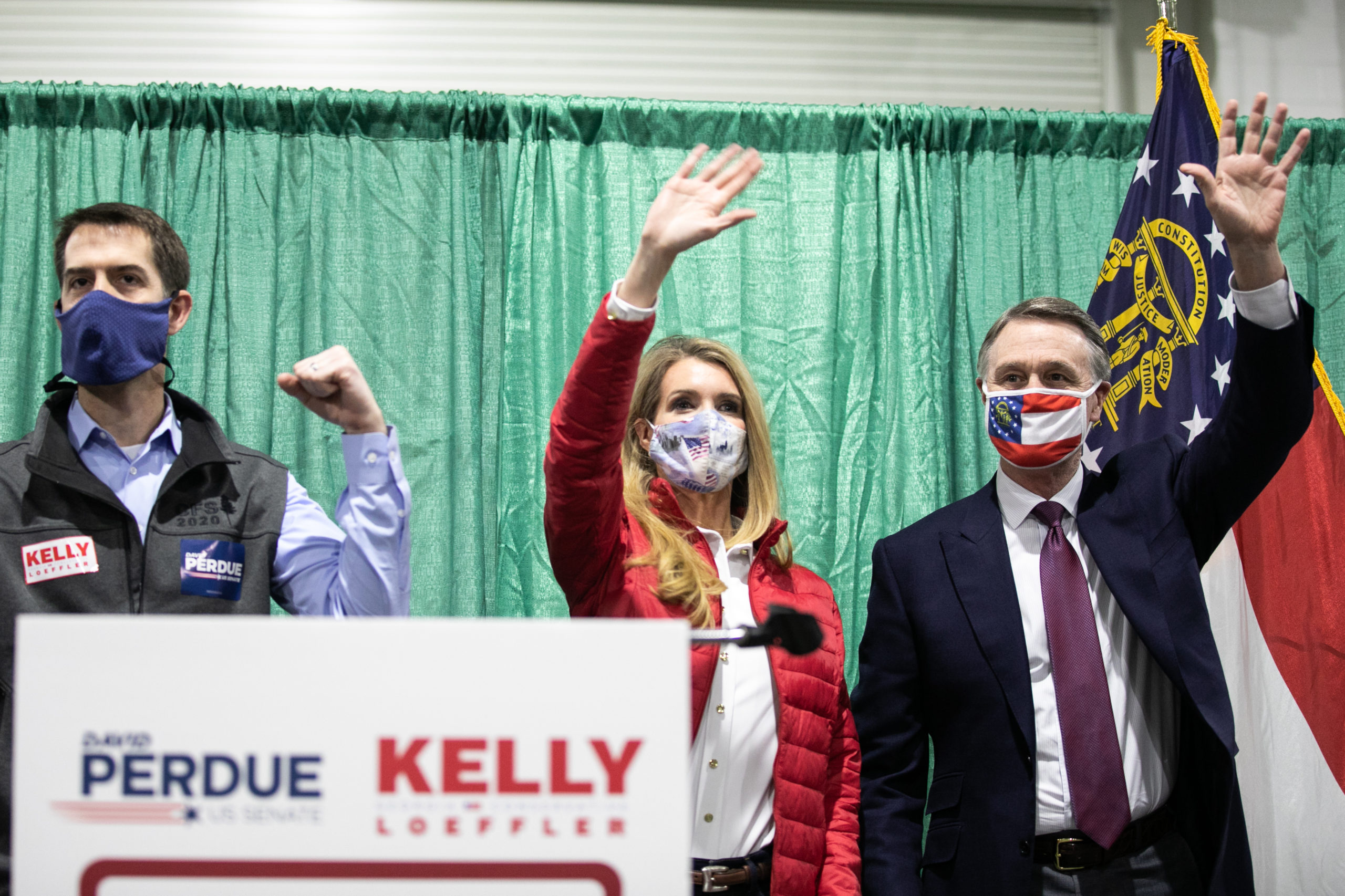 U.S. Sen. David Purdue (R-GA) and Sen. Kelly Loeffler (R-GA) wave to the crowd of supporters at a “Defend the Majority” rally with Sen. Tom Cotton (R-AR) at the Georgia National Fairgrounds and Agriculture Center on November 19, 2020 in Perry, Georgia. (Jessica McGowan/Getty Images)

Perdue and Loeffler are facing Democratic challengers Jon Ossoff and Rev. Raphael Warnock, respectively. Perdue received just under the 50% needed to avoid a runoff, while Loeffler received nearly 27% of the vote in a race with over 20 candidates.

Even additional hopefuls who have yet to campaign in Georgia have shown their support for Perdue and Loeffler.

One possible candidate, Missouri Sen. Josh Hawley, wrote in a fundraising email that Republicans were “in danger of losing the Senate to extremist liberals who want to raise your taxes, defund the police and pass legislation for a sweeping government takeover.” Another, moderate Maryland GOP Gov. Larry Hogan, urged for Georgians to vote for Perdue and Loeffler in an op-ed Monday.

Another potential Republican candidate who is also set to rally on behalf of Perdue and Loeffler is President Donald Trump. Despite losing to President-elect Joe Biden, he remains perhaps the most popular Republican nationwide, and according to a Morning Consult poll, the overwhelming 2024 favorite among GOP voters.

Trump has not only reportedly planned to announce his 2024 candidacy once Biden’s win is certified, but has also floated a campaign-related event during the inauguration.